41 by Huck
I agree, that 1418 is not sure, but generally I'm happy, even I get insecure information.

I recently wrote this ... This copy of the Canzoniere begins with a stylized portrait of Petrarch at his writing table. The manuscript is written in minuscola cancelleresca, a script similar to one that Petrarch adopted in early rough drafts of his poetry, some of which survive in the Vatican Library’s Codex Vaticanus latinus 3196. The minuscola cancelleresca was in wide use during the 14th century, and it has been suggested therefore that this manuscript may have been copied in the 1390s. Whether written in the 14th or early-15th century, Marston MS 99 is one of the earliest copies of the Canzoniere. It appears together with Petrarch's Triumphi, and a collection of Italian poetry by various authors. Petrarch remains the dominate figure in the manuscript, just as he was in the literary circles of both the 14th and 15th centuries.

I seems, it contains only a small passage of the Trionfi poem.

I'm not sure, if this was noted by everybody. There was a "Trionfi" manuscript in the first quarter of 15th century (if we can believe the description), mixed with Canzonieri, but it was only, as far the Trionfi poem was concerned, only a snippet.
And somewhere and somehow the manuscript or a copy must have been, otherwise we wouldn't have th Trionfi today.
But the general trend seems to have been, that Petrarca was seen long time as scholar, and not as a poet.
So I've read with interest in my recent studies, and noted it, that ...

It was mentioned above, that the Petrarca biography of Vergerius was paired often with a text of Buanaccorso. He was in Florence and an Petrarca enthusiast, and he had opportunity to visit Filippo Maria Viconti in diplomatic mission (1428). He died young, famous for his talent as a public speaker, a fame, which is also given to Vererius.

The younger, Giovane Buonaccorso da Montemagno (Pistoia 1391/93 — Florence 16 December 1429), nephew of the elder, was a Renaissance humanist. He was a judge in the Santa Croce quarter of Florence (1421) and in September of that year was appointed Maestro in the Studio fiorentino. In his poems (Rime), if they are not his uncles', he imitated Petrarch's sonnetti d'amore, setting an example for fifteenth-century Petrarchism. The younger Buonaccorso was highly esteemed for his public orations, in which Cristoforo Landino ranked him with Boccaccio, Leone Battista Alberti, and Matteo Palmieri.[1] In July 1428 he was sent as ambassador to the Duke of Milan to establish the terms of the peace treaty in which Florence had acted as the ally of Venice.

Buonaccorso's De nobilitate, an outstanding expression of the literary topos of the New Man — Homo novus — whose nobility is inherent in his own character and career, was translated into English by John Tiptoft, created Earl of Worcester and published in 1481 by William Caxton, as Here foloweth the Argument of the declamacyon which laboureth to shewe. wherein honoure sholde reste. It was rendered in play form, still in Latin, by Sixt Birck and published at Augsburg in 1538.

... there was a Canzonieri enthusiast in Florence in the 1420s, close to Cosimo's nose, and he even visited Filippo Maria Visconti (1428). Strange enough, he died soon after, very young (1429).
He had, though young, a talent as an orator ... this likely made him predestined for diplomatic missions. Filippo Maria also loved the Canzonieri, but I don't know since when.

These are the dates from storiadimilano:

Peace between Venice and Milan likely meant also peace between Florence and and Mila (?) Filippo Maria married soon after ... well, perhaps he just read the Canzonieri in 1428. Were there Canzonieri in the Visconti library 1426? Perhaps we get the tail of the first "Trionfi"-poem propaganda, if we follow the Canzonieri, which seems to have been popular before?
Huck
http://trionfi.com

I'll get back with the full list after dinner

Ross G. R. Caldwell wrote:No Canzioniere in 1426. He only has his Latin works.

I'll get back with the full list after dinner :)

Likely we can't rely totally on the inventory. If it is the inventory of Pavia, it's not naturally including works, which he had at other castles. Perhaps just the books, that he loved and used, were not in Pavia. Or is it specifically said, that it was all, that he had? It might have been a motif, to impress with as many books as possible, then it would have better chances to be complete.

Galeazzo Maria had about 8 castles, that he used (or something like this).
Are many Petrarca works listed? Latin or vernacular?
Huck
http://trionfi.com

44 by Ross G. R. Caldwell
Yes, we can't rely on the 1426 inventory for an absolute statement of what Visconti had. He probably had many with him in Milan, and lots at Abbiategrasso (for Bianca Maria especially). So it is just an indication of what he certainly had, not what he didn't have. 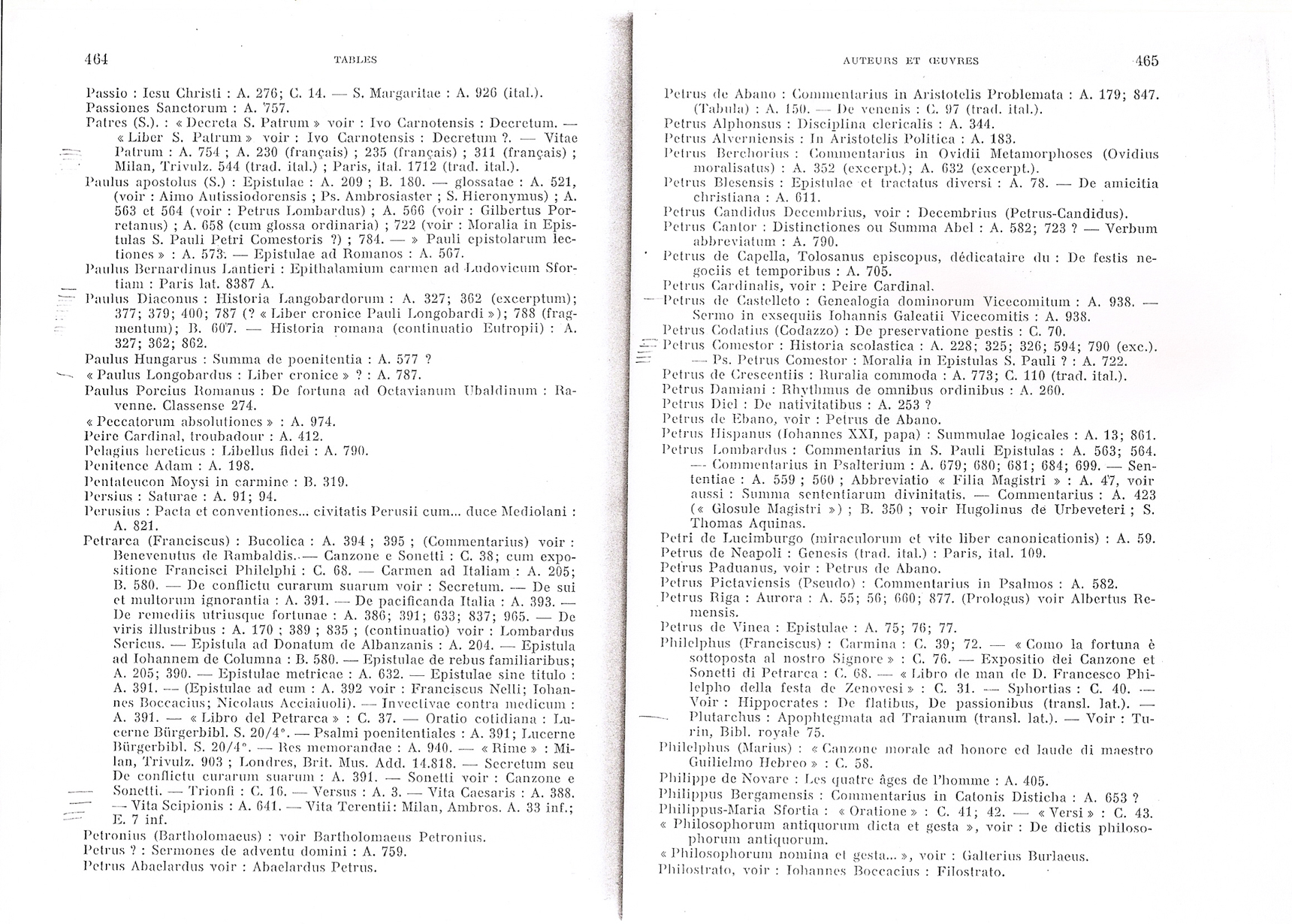 As late as 1443 Lapini got the commission, to comment on the Canzonieri. Filelfo followed 1444. In the biography 1447 Decembrio wrote about a "bad habit" of Filippo Maria, likely indicating something with sexual behavior. Leonello protested. Then there's the story, that he had made girls read him the Canzonieri (and I don't know, when this had happened). If this would have been a habit 10-20 years ago, would Decembrio have attempted to note it in 1447? It sounds, as if this answers to an actual critique. Generally Filippo Maria protected his private life against curious eyes, but in the last years this was difficult, cause he was handicapped by his sickness.

Could it be, that the vernacular Petrarca was more or less not known a long time in Milan?
Huck
http://trionfi.com

46 by Ross G. R. Caldwell
Well, Marziano's opusculum "De deificatione sexdecim heroum" is also not listed, so we know we are only seeing the books that stayed in Pavia, and perhaps some were loaned out as well.

It seems that none of the "great libraries" prior to 1440 whose lists I have seen have the Trionfi.

We have Francesco Gonzaga (1407), Cosimo de Medici (1417/18), Filippo Maria Visconti (1426), and Niccolo d'Este (1437). I suppose the other ones I would like to see are Francesco da Carrara (died 1393) and Sigismondo Malatesta (but since his library might not have been inventoried until his death in 1468, perhaps his father Pandolfo's library would be more informative to look at, if there is an inventory of it at his death in 1427).

Like you noted about Yale's Marston 99, it might be that individual Trionfi parts circulated independently from Petrarch's death until some time in the 1430s. It could even be that Guiniforte Barzizza is quoting from one of these unsynthesized editions in 1439.

So who was the genius who hammered together the canonical form of the six Trionfi with their subsections, and when?

47 by Ross G. R. Caldwell
Perhaps I can speculate further that IF the canonical form and order of the Trionfi as we know them did not arrive until later, perhaps as late the late 1430s, and IF the inventor of the Game of Triumphs in cards was influenced by the Petrarchan theme of Triumphs, then it might be anachronistic to look for those six in that order in the Tarot trump sequence. The inventor, in other words, might not have known the "complete" poem as we know it.

The inventor might have known that Petrarch wrote Triumphs, on Love, Death, Virtue, Fame, Divinity, etc., and was inspired by what he knew to add them as allegorical subjects to a card game. But he was not constrained by any canonical number or order.

I guess I'll have to find out when the first such canonically complete manuscript was made, and when that edition began to circulate.

The influence of what became the canonical iconography accompanying the poems upon the Tarot trumps (or vice-versa?) is another question, but at least we can date that more precisely to "around 1440".

48 by Lorredan
I read...
Kent is professor of history at the University of California at Riverside.
So I emailed with request about the subject (I have not received an email reply)
I wrote to To her at the University at the same time, and the mail came back the day I posted here in the Forum with a stamp DECEASED. Strange sort of Joke if she is not dead.
That is why it took me so long to reply to the question here on the forum.
I have not been able to find an Obituary.....so who knows. Write away...maybe she will rise from the dead or maybe she does not know where New Zealand is. Or maybe she only anwers to Historians or students.
This subject is enough to make a Saint faint.
~Lorredan
The Universe is full of magical things patiently waiting for our wits to grow sharper.
Eden Phillpotts

It could well be that she had a sudden demise - I'm just trying to do some background research here, before contacting anyone about it.

So the trail leads to Melbourne, for the moment.