Huck wrote:
But what do you have about the murder of 1440?

Ghirardacci tells it fully. Annibale did not want to take the daughter of Raffaele Foscarari as a wife. Foscarari took this as an insult and his statements reached Annibale, who took revenge for the insult on Februrary 4, 1440. Afterwards he had to leave town on the advice of Piccinino.

102 by Ross G. R. Caldwell
I can't make out whether Filippo was involved with the conspiracy to murder Annibale (pp. 102-106 of Ghirardacci). He could have been, he had dealings with the Canetoli as much as he had with anybody important in the city, but I sense he was not major actor here - at least Ghirardacci doesn't mention him having any benefit, but it is a long story I will have read more closely.

I don't see it as relevant to my story whether Visconti befriended or betrayed Annibale anyway - what do you think is the relevance?

103 by Ross G. R. Caldwell
More on the two actions of Annibale (Trevor Dean, "Marriage and mutilation: Vendetta in Late Medieval Italy" Past and Present (November 1997) -

" Ghirardacci's account of Annibale Bentivoglio's killing of Raffaele Foscarari in Bologna in 1440 explains it by the odio mortale created between them when Annibale rejected Raffaele's offer of a daughter in marriage. Annibale subsequently excused his killing of Foscarari as `private enmity'.(125) Ghirardacci's narrative has been accepted by many authorities,(126) but contemporary accounts do not mention Raffaele's offer of a daughter, and it is plain from these and other records that Raffaele's death was a purely political matter, perpetrated to remove an ambitious and powerful rival from the scene. Annibale's plea of `private enmity' was a convenient invention.(127) Such a blatant political murder had to be given private justification: the most convincing was a dispute over a marriage, which, as a Bolognese statute put it, was a known and potent source of `serious scandals ... even enmities and homicides'.(128)

Similar narrative elements can be detected in the killing of Annibale Bentivoglio himself by the Canetoli family in 1445. The reaction against the Canetoli was fierce -- death, exile, defamatory paintings, destruction of house -- but also, in Ghirardacci's account, it included two specific moments of vendetta, full of intense symbolism: the aforementioned instance of Battista Canetoli's heart being cut out and nailed up outside Annibale's house `in sign of vendetta'; and Baldessare Canetoli, who was held captive in the Bentivoglio palace, being confronted by Annibale's widow and forgiven, before being beheaded at the site of the murder and then hanged by the feet on a gallows.(129) Symbolic actions of this sort, Ghirardacci implies, closed the cycle of vendetta.

However, it is important to remember that it is Ghirardacci who presents this as a cycle, patterning his history with sixteenth-century hindsight. His version of these events differs markedly from that of the main contemporary Bolognese chronicle,(130) where there are no clear cycles of revenge, no originating episodes giving rise to odio, and symbolic conclusion. Battista Canetoli's heart was not cut out and nailed to the Bentivoglio palace;(131) Baldessare Canetoli was not confronted by Annibale's widow. For the historian seeking the `real' history of this episode, there are clear reasons for doubting Ghirardacci's version, but it is more important to note the role of these opening and closing devices in the narrative of the history."

104 by Huck
.. the case is interesting, as Bianca Maria returns back from Ferrara in April 1441 and with Francesca, Donnina's sister in the house of Borromeo we've actually a "playing card context", and also some secure probability, that Bianca Maria saw Donnina, before she went to Bologna. These bride's in near future, they should have visited each other and surely they talked about cards, if Bianca Maria was confronted with a deck production at 1.1.1441.

The father Lancilotti is called responsible from 1413 - 1447 for a region near to Novara, but also "count of Cocignola" ... which should be near Lecce, near a location Merate (there's another Cicognolo near Cremona, but this seems to be wrong, though it would be interesting, if a connection to Cremona would exist).

It's an illegal son of Bernarbo, perhaps Lancillotto became of more interest, when his daughter Francesca married the successful Borromeo. But ...


This seems to say, that the marriage, which connected the houses of Lancilotti and of Borromeo happened probably ca. 1450, so couldn't influence the situation of 1441.
So the consideration runs here into nothing, it seems, that Lancilotti's daughter Francesca became of interest for Borromeo, as Doninna became mighty in Bologna.

But the note says, that the older Borromeo (the successful) became Lord of Arona in 1436 and this Arona seems to be near Novara, in the region, where also the Visconti brothers Ermes and Lancilloti have their domain. So possibly Borromeo already managed the somehow lucrative marriage to Bentivoglio.

Arona and Invorio (that's at least one of the stations of Hermes and Lancillotto) have a distance of about 7 km - well, that's close. So for 1441 Lancillotti and Borromeo should have had some closer contact at least.
Huck
http://trionfi.com

105 by Ross G. R. Caldwell
It's interesting where these discussions lead.

Yes, I can imagine Borromeo influence in this wedding - thanks for the details. If Bianca Maria corresponded with Donnina, it should survive (Bianca's part anyway).

Here are pictures of Arona, viewed from the Castle of Angera (also then owned by Borromeo), taken last summer - 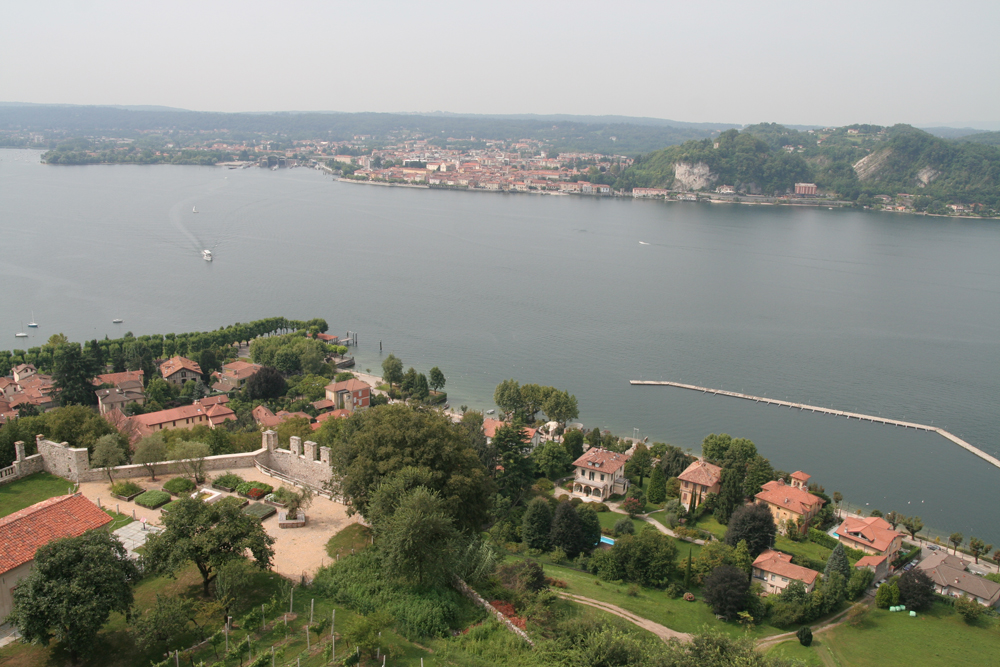 ... though, the art is not very inspiring, possibly even older than Borromeo (?)
Huck
http://trionfi.com

107 by Huck
If the Pisanello-Hypothesis as painter of the Casa Borromeo-pictures is correct, than the whole matter would win in plausibility, as Pisanello was in this time in Milan.

... .-) ... also you should note, that the highest trump in the 14 Bembo cards is also the Judgment-Angel
Huck
http://trionfi.com

***********************
# La Rocca ("The Castle") is a park owned by the Borromeo family. The park used to contain the castle of Arona, destroyed by the Napoleonic armies, and was the birthplace of St. Charles Borromeo himself. The park is freely open to the public and is a favourite of many locals; many animals are kept in semi-captivity in various areas of the park.
# The Lungolago ("Lakeside") offers a fine view of the castle of Angera and the Alps. Swimming in Lake Maggiore is now possible, after years of pollution. A beach has been refurbished by this group close to Piazza del Popolo in the town center, called Le rocchette ("The little rocks").
http://en.wikipedia.org/wiki/Arona_%28NO%29

There have been two Borromeo castles, one is destroyed in Arona (there is a park now; Borromeo got this probably 1436) and the other was located at the opposite of the lake (this is the one, which is seen in the movie), which Borromeo bought in 1449. The Borromeo family could control the southern lake this way - and the easy trade way to South and North.

??? Seems to be the rest of a "trionfo d'amore" of Michelino, the latest work of the master in the age 78. Made probably 1450 for the marriage of Francesca di Lancellotti and the Borromeo son and heir.
http://www.storiadimilano.it/Arte/miniatori.htm
Huck
http://trionfi.com

110 by mikeh
I am a little behind in my responses, due to Christmas.

Huck: I want to comment on your analysis of the BAR Star card. There may indeed be some negotiations going on between guy on the left and the guy on the right. If it is a deal to make the guy in the center Pope, a contemporary reference might be to Alexander VI, who, it was alleged, bribed his way to the pontificate with the help of the Sforza. Alexander and his son Cesare were not liked in Bologna, and of course the Medici popes would have agreed. If it is an Emperor that is being crowned, a possibility is Charles V, who bribed his Electors with the help of his banker. (See Wikipedia on both Alexander and Charles.) Probably bribery was a common enough occurrence. 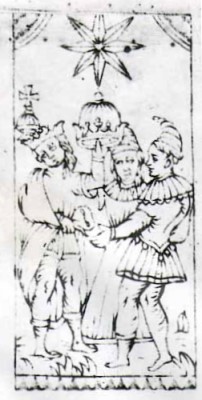 But it seems to me that such an interpretation is secondary. The primary meaning is the Three Wisemen. Who do you think of first when you see three guys under a star? The one on the left is looking off to his left, west, where the star is telling them they should go. The two on the right are from the East (right side of a map); the one on the left looks more western. And he has more authority, since he has both the "apple" and wears a crown. The middle crown, held by both right and left, is for Jesus. I think it likely that there is a reference to the Pope in the West and the two Patriarchs in the east, of Muscovy and Constantinople. The card says that the two in the East should follow the lead of the one in the West.

The Wiseman on the right is wearing the Phrygian cap associated with the cult of Mithras, which was thought to have originated in Persia, i.e. the East. The center Wiseman probably wears the same thing. There were reliefs and coins with such caps known in the 15th-16th centuries. Here are two examples: 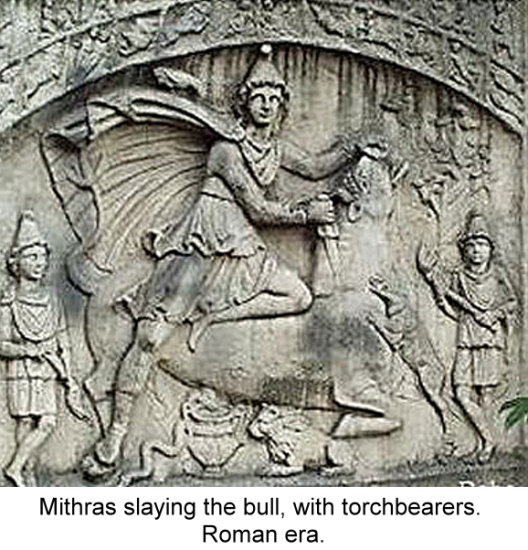 An example of the same motif, one figure looking one way and two looking the other way, can be seen in an "Adoration of the Magi" attributed to Bonifacio Bembo, in the upper left of the painting, as reproduced in Kaplan, Vol. 2: 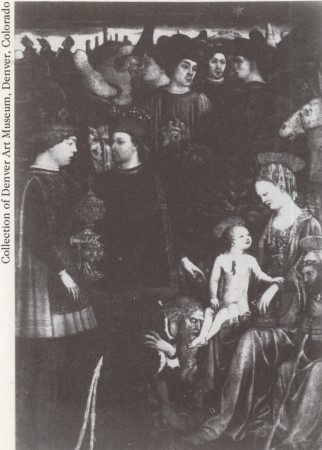 Here is the relevant detail: 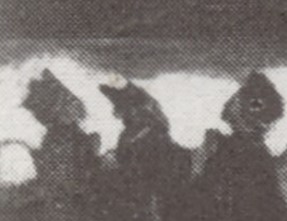 The three silhouettes correspond to the three kings in the foreground of the painting. One is young, with blond hair and an ordinary crown; one is middle-aged and wearing a red condottiere hat with crown points on it; and one is old, kneeling, with a red cape and pointed hat. I know the colors from an image of the painting that the Denver Art Museum sent me (they don't want me posting it on the Internet). In the silhouettes, the old and middle-aged wisemen are looking toward the star. Kaplan has unfortunately printed a mirror image; the star should be on the left and the wisemen on the right, as they are in my Denver Art Museum image. Another variation is the d'Este card, in which the two Wisemen looking in the same direction have been reduced to just one. In the BAR, of course, two are looking in the wrong direction and only one in the right direction. But the idea is the same.