You're missing my point with that paragraph - the dating within 5 years has nothing at all to do with Bologna, or any other center. It is an inference based on the pattern of evidence when it is charted chronologically.

I don't really miss it.
The real object behaves like a river, the observable number of "existing + once existing decks" can only be increased with the time. The factor of increase is variable, depending on new productions, which sometimes happen and sometimes not. The "news about the object, that reach us" is another value, much less controllable. It somehow presents a mirror of the development, but naturally it tells also lies about it. Few decks can be presented by more news than many, for instance. Their interpretation is more dependent on clever interpretation, for instance if a document is more valuable than others.

In your calculation one (probably more) information is missing: The poem of Meisner about Karnöffel. I try to fill it at least a little bit.

First the Karnöffel is described in a manner, that one feels tempted to assume, that also his victim, whom he seem to rob the clothes, is possibly a "real card".

Then a category of "heilige Lehrer" (? or "Väter" ?) is mentioned and it is not said, how much they are. I assume, that these are 4. (I've some doubts: I think, he did write "heilige Lehrer", but might be slightly different)

so, you see, the origin of the "begin of Tarot" would be according this interpretation simply Karnöffel. Karnöffel had other numbers, in Tarot the numbers would have been dropped with (-1)

**********
Think about it, it's not easy to get it.
Meisner uses not the expressions Keysers (Emperors), but has one Keyser and Emperor instead

He uses "heilige Väter" and it's not clear, how much they are. I guess, they are four, which present the 4 suits (and the 4 court cards).
If "heilige Lehrer" is correct remembered ... if it was heilige Väter, they would be easily translated to "Papi"


A resistant iconography is found for many mass produced decks with woodcut technique. Early woodcut use for trionfi is only postulated, not documented. Bolognese decks for the early time are missing ...

I'm not sure what you mean - regular decks or trionfi? Whichever it is, it doesn't matter, because "early decks" for whichever town in Italy, are missing, except for luxury Tarots. When woodcuts come along, every type, A, B, and C has its witness, and they are as near as we can tell contemporary. So your barb has missed its target - for printed decks, Bologna and A are better witnessed than any other printed early type (Rosenwald, Beaux-Arts/Rosthschild) - two for the one of B and C (Budapest/Dick and Cary Sheet respectively).

You occasionally forget, that I've quite other theories about some things ...

... With early Trionfi decks I think of the phase, when Trionfi cards hadn't a woodcut existence. As you think, that they had already one, then you've to translate my statements to that, what makes sense in your world.

I can't help it, the huge differences in our both interpretations exist. I don't believe in much mass production of Trionfi decks before 1470.
When woodcut had been used in book production with movable letters as a regular and normal technique?

True, there was this Blockbuch-technique and we more or less have only German examples.
Huck
http://trionfi.com

Huck wrote: In your calculation one (probably more) information is missing: The poem of Meisner about Karnöffel. I try to fill it at least a little bit.

I found a complete one here (scanned from Oxford rather than Michigan, with the missing pages): choice of formats -
http://www.archive.org/details/frankfur ... 04unkngoog
or if you prefer PDF by default -
http://ia311328.us.archive.org/2/items/ ... kngoog.pdf

I would like to know more of this poem. Is it a similar poetic rendering of the deck, like Francesco de la Torre? (also c. 1450)
http://ludustriumphorum.blogspot.com/20 ... -game.html

Page 200 - 202 ... special note to the Karnöffel poem .. partly some interesting ideas, for instance that "Haintz eff mich wohl" is the Karnöffel. 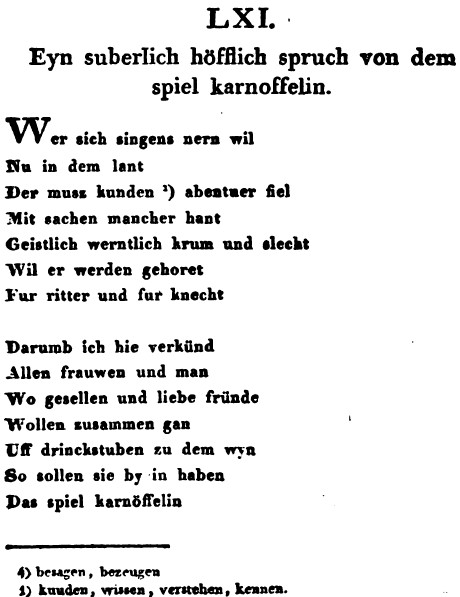 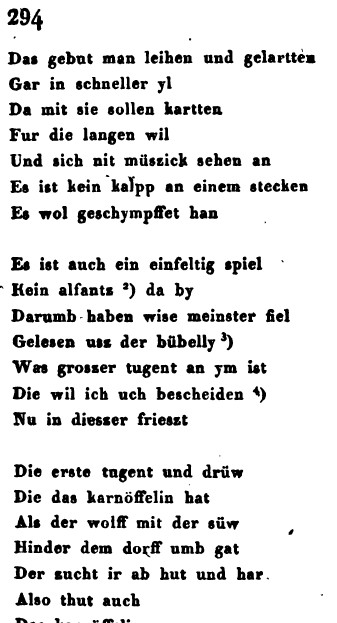 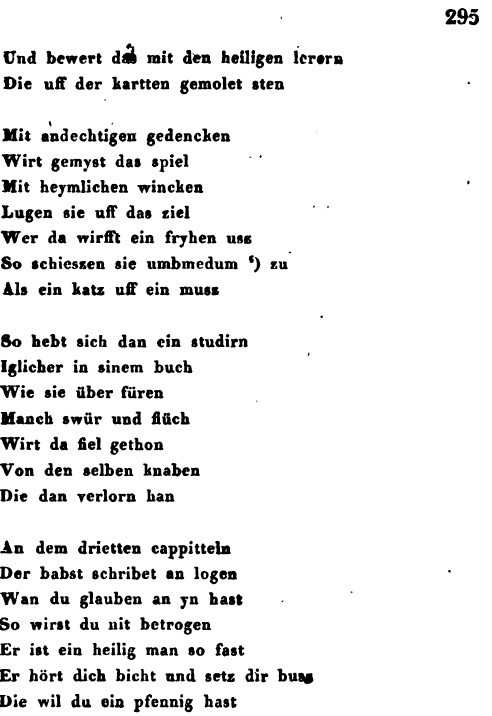 4 by Ross G. R. Caldwell
Huck, could you at least give a summary of each verse, tell us something about the order, the description of the figures, etc? (btw, there seems to be a line cut off at the bottom of page 294).

I think we should start a thread on this by itself, but keep it here for now.

Verse 1 introduces the situation of the poet - not important

Verse 2: People go in the pub and shall have and use the game Karnöffelin. The talking is in a way, that one may conclude, that Karnöffelin is a special card deck, not the usual deck. From the passage alone it's not 100% secure, but this assumption fits with the later text - "dann sollen sie bei sich haben
das Spiel Karnöffelin", it's not said "playing cards".

Verse 3: Laymen and scholars shall play Karnöffel and gather experience - not important

Verse 4: It's a virtuous game - not a cheating game. Not important.

Verse 5: Here the first chapter (capittel) starts, but it's not stated in the text (later cappitel are announced, the 5th uses the terminus "Blate" (German "Blatt", an expression usable for a card). Each cappitel introduces cards. In this chapter the Karnöffel (as a card, not as the game) itself is introduced.

"Wolf mit der Sau" - the wolf is taken as an analogy for the strong Karnöffel (the highest card), the "Sau" as motif is often used at German playing cards (at the 2's usually)

"zieht ihr ab Haut und Haar" - "Er zieht einem ab Rock und Kittel" ... here a picture is used, that the Karnöffel takes the clothes of an unknown victim. The description fits with the iconography of the well dressed Magician (who looks so well, as he got the closes of his opponent) and the poor and nearly undressed Fool in the Trionfi cards - especially in the 14 Bembo cards.

rest of Verse 6: it is spoken of the "ander cappitel" (= second chapter) and of the "zwölften Teil" (12th part) and of "heilige Lehrer" (holy teachers). The unexplained detail is "12th part of what ?" and the only logical answer is, that the deck has 48 cards in 12 suits and that at a 1/12th part of it (which are 4 cards) 4 "heilige Lehrer" are painted. ("die auf den Karten gemalt sind")

Verse 9: Describes the 3rd capittel and the Pope - it stay not clear, to which degree soft irony is expressed.

Verse 12: Describes the Emperor mit "Untertanen" - which should present either 1 Emperor + all other cards, (= Untertanen) or simply all other cards (whose number should be "40"), counting

which should be 48 cards (or possibly 49, as in the divinatory Spanish game, as Ross had analysed it). As noble men are mentioned in the text "Grafen" and "Freie", possibly other names for Ober and Unter, so would stay 32 cards, possibly referring to 2-9. Another possibility would be the usual 10 numbers, 2 for Ober and Unter, for each suit a "holy teacher" added by 3-5 special cards, possibly resulting in a 4x14-deck .

Verse 13: The Karnöffel is served by the Untertanen and a remark about the money with "Haintz eff mich wohl" ... 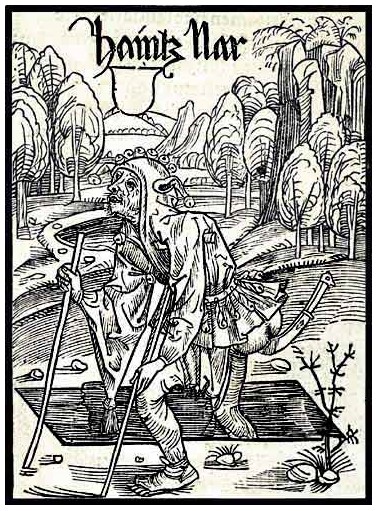 The above "Haintz Narr" is from the "Ship of Fools" (1494) and relates to the modern German expression "Hans Narr", which also relates to "Hanswurst", an expression for a foolish clown.

Verse 14 + 15 : Strong irony in verse 14, a dog in the grass (probably cleaning his backside after "big business") is compared to Beichte and Busse in the mess. Another irony in verse 15 about the devil, who somehow gets the last word in the poem.
Huck
http://trionfi.com 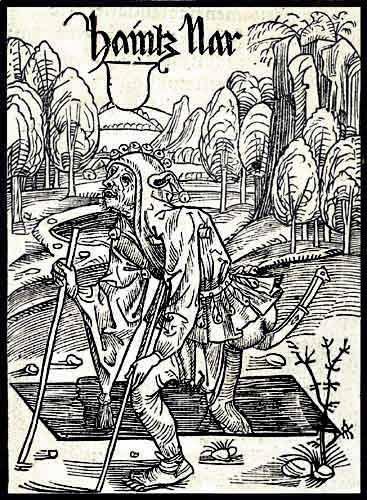 9 by Ross G. R. Caldwell
Excellent Huck - where did you get that, or did you do it?

We are going to move Meissner's stuff to its own thread in the Research section, by the way, since it is really research, and it is not directly related to Bologna.

1. Who wants to live on singing
now in this country,
must explore the many adventures
with all sorts of things
sacred, secular, crooked and bad,
if he wants to be heard
of knights and servants.

2. Therefore, I announce here
all women and men,
when my friends and companions
meet
at the tavern for wine,
then they should have with him
Karnöffelin the game.

3. The main commands laymen and scholars
even faster in a hurry
so they will play cards
Against Boredom
and not to watch (Flare) idle
there is no veal on a stick
was probably the most reviled (?).

4. It is also a silly game
no fraud here
Master had so much as
read about the villainy.
Which is great virtue in him,
I will tell you
Now in this period.

5. The first virtue and good
which has the Karnöffelin
like the wolf with the sow
handle behind the village
pulling off her skin and hair
So also does
the Karnöffel

6. He pulls off his coat and one coat
and binds him with the rope
So writes the second chapter
In the 12th Part
and says more of his virtue
and proves that with the holy teachers
are painted on the cards.

7. With devotional thoughts
mixed game
with secret hints
(peep), they look at the target.
If one is a free As (?) Plays (or ejects a Free)
so they shoot from anywhere (or put it in the cards, which try to get the card?)
like a cat to the mouse.

8. So then begins a study,
every one in his book,
how they transform (? how to play;? how to overcome the other)
Some oaths and curses
there are a lot of
by the same boy
they then lost.

9. In the 3rd Kapittel
The Pope writes without lies,
if you have faith in him
You will not be cheated
He is a holy man, as far
He hears your confession and sets you a fine
if you have a penny.

10. In the 4th Chapter, as it adds
We are taught here
by the honorable and wise man
of anyone seeking accident
and is called the devil called
even the truth of the
recognizes in the game.

11. And he warns damage to his
that he should beware of
He is overloaded with religiousness
like a crab with banwol (? ... wool?
the strange ways has.
So does the devil
with some trickery.

12. In 5th Leaf
We find here written
in great majesty
The Keyser Sitting
who has with him a lot of subjects,
Counts and outdoors
of the fief of Him

13. They have to come up with the Karnöffel (serving)
with body and goods
No one crate (?) A map,
when it is forbidden.
And always keep the ban on the Gelt (? On the table? In the eye?)
else comes "Heintz eff me" probably
pulling it like this very soon.

14. Therefore, my dear boy,
let yourself be ordered
have the love
to Karnöffelin
deserve mercy drain
and be blessed at mass.
like the dog the grass (do well).

15. Here mySN sings
so he has heard
whether someone is here now
of doubt or suspicion has
the injustice done to him in the game
This again speaks of the Devil
and lays it on his poor soul.