Unlucky 13 and the early development of the trump sequence

11 by Ross G. R. Caldwell
I'm surprised that Andrea didn't refer to my own investigation of this question, online since 2009.

12 by Huck
Andrea wrote, MikeH translated
"(That 17, combined with Friday, has been considered an inauspicious number has been established since the Middle Ages, where the anagram of 17 written in Roman numerals XVII gave VIXI, or vissi, that is to say 'I no longer live'. Since Our Lord died on Friday the 17th, the union of that day of the week with that date was included in the list of times to avoid in undertaking any desired action.)"

I know from the Petrarca life, that Petrarca knew "Good Friday" connected to the 6th of April (he met Laura at this day in 1327) and I remember to have seen it also elsewhere, so I'm surprized to see the "17th day of this month" as relevant. Petrarca seems to have stated also, that Laura died at Good Friday, 6th of April 1348, which isn't possible, if 6th of April 1327 was a Good Friday.

LDS Prophets and Apostles
The statements of LDS prophets and apostles inTable 3 generally agree that Jesus was born on April 6th. However, some LDS scholars believe Christ was born in 1 BC, exactly 1,830 years before 6 April1830, while others believe the phrase 1,830 “years since the coming of our Lord” simply expressed the current year as being 1830

Jesus, as described in the New Testament, was most likely crucified on Friday April 3, 33 A.D. The latest investigation, reported in the journal International Geology Review, focused on earthquake activity at the Dead Sea, located 13 miles from Jerusalem.

Then 6th of April would have been Eastern Monday.

For the 17th of April I found that: https://en.wikipedia.org/wiki/Chronology_of_Jesus

Some commentators have attempted to establish the date of birth by identifying the Star of Bethlehem with some known astronomical or astrological phenomenon. For example, astronomer Michael Molnar proposed 17 April 6 BC as the likely date of the Nativity, since that date corresponded to the heliacal rising and lunar occultation of Jupiter, while it was momentarily stationary in the constellation of Aries. According to Molnar, to knowledgeable astrologers of this time, this highly unusual combination of events would have indicated that a regal personage would be (or had been) born in Judea.[68] Other research points to a 1991 report from the Royal Astronomical Society, which mentions that Chinese astronomers noted a "comet" that lasted 70 days in the Capricorn region of the sky, in March of 5 BC. Authors Dugard and O'Reilly consider this event as the likely Star of Bethlehem.[69] However, there are many possible phenomena and none seems to match the Gospel account exactly.

But this is also for birth, not for the date of death.

I attempted to find something in Italian language with "17 aprili" "Jesus" "morte" and "buon venerdi" "Jesus" "17 aprili" ... I got nothing.
Huck
http://trionfi.com

This page lets you calculate the date of Easter for the early years of the first century
https://webspace.science.uu.nl/~gent011 ... ulator.htm

For the years 20 to 35, it gives the following dates for Easter -

None of those years get a desired date Friday 17 April.

14 by Huck
hm ...
Sunday 19 April 1992 was an Eastern Sunday with a natural Good Friday at 17.4.1992.
https://www.rechner.club/feiertage/oste ... -berechnen
That's according the Gregorian calendar.
I don't know, if the earlier methodes could exclude a date. The Julian calendar had an Eastercycle with 532 days. Hard to imagine, that none of these had an Eastern Sunday at 19th April. The Alexandrian calendar had variants with a 95-year cycle and 532-year-cycle, as I understand it.
https://de.wikipedia.org/wiki/Osterdatum

But that's not the point. Andrea claimed, that the negative "Italian 17" had its reason in the condition, that Jesus died at this day. So I searched for a tradition, which claimed actually this (independent from the condition, if the statement is correct or not or if Jesus really died at this day). I had problems to find something, I couldn't confirm it.

In Italy, 17 is considered an unlucky number. One anagram of the Roman numeral XVII is VIXI, which in Latin translates as "I have lived", with the implication "My life is over" or "I'm dead". Some Alitalia planes have no row 17, some Italian hotels have no room 17. The 17th curve at the Cesana bobsled run at last year's Winter Olympics in Turin was "Senza Nome", or "Without a name".
"It's true, we Italians don't consider 17 a good omen," said one Italian writer yesterday ahead of Italy's crucial Euro 2008 qualifier with Scotland this Saturday, 17 November.
A quick perusal of the record books shows that Italy have played 11 matches on the 17th of a month in the past 30 years. They have won just four. Painful reversals included the agonising World Cup final penalty defeat against Brazil, on 17 July 1994.
Will Scotland be grasping at this straw?

15 by mikeh
On the negative associations to 17, Andrea writes me:


(Already in ancient Greece the number 17 was abhorred by the followers of Pythagoras as it was between 16 and 18, perfect in their representation of 4 × 4 and 3 × 6 quadrilaterals. [1]

In the Old Testament it is written that the universal flood began on the 17th of the second month (Genesis, 7-11) [2]. Conversely, according to the Hebrew Kabbalah, 17 is a propitious number, since it is the result of the sum of the numerical value of the Hebrew letters têt (9) + waw (6) + bêth (2), which read in the order give the word tôv "good, well".

On the tombs of the dead of ancient Rome, the inscription "VIXI" ("vissi", equivalent to "I am dead") was common, which is the anagram of "XVII" which represents the number 17 in the Roman numbering system. [without source]

Andrea also sends me many examples of 17 in favorable terms, which I will skip.

Friday speaks for itself: a sacred and sorrowful day. In addition, according to Lunario by Alfredo Cattabiani, an historian of popular traditions:

As for Tuesdays or Fridays, this is a measure adopted by the Church in the early Middle Ages to counteract superstitious pagan practices which instead favored the days consecrated to Mars and Venus for certain actions. In Visigothic Spain, Friday was considered propitious for weddings, as Martin of Braga testifies, writing: "That women invoke Minerva on their weaving and observe Venus's day for their wedding and take care of the day they go out into the street, what else is it if not devil worship? [end quotation?] Since those practices could not be eradicated, it was decided, with a refined strategy, to gradually create "counter-superstitions" by coining proverbs such as the famous "Neither by Venus nor by Mars do we marry or do we leave".

Friday the 17th would seem to be more of the same.

16 by Ross G. R. Caldwell
This is the statement we can find no authority for - "Poiché di venerdì 17 morì Nostro Signore,..."

I take it that it's merely a typo, and Andrea only intended "Friday," not "Friday the 17th."

23 [Legamen ad paginam Latinam] 1 He suffered but two severe and ignominious defeats, those of Lollius and Varus, both of which were in Germany. Of these the former was more humiliating than serious, but the latter was almost fatal, since three legions were cut to pieces with their general, his lieutenants, and all the auxiliaries. When the news of this came, he ordered that watch be kept by night throughout the city, to prevent outbreak, and prolonged the terms of the governors of the provinces, that the allies might be held to their allegiance by experienced men with whom they were acquainted. 2 He also vowed great games to Jupiter Optimus Maximus, in case the condition of the commonwealth should improve, a thing which had been done in the Cimbric and Marsic wars. In fact, they say that he was so greatly affected that for several months in succession he cut neither his beard nor his hair, and sometimes he would dash his head against a door, crying: "Quintilius Varus, give me back my legions!" And he observed the day of the disaster each year as one of sorrow and mourning.

What we would need would be opinions to the theme "17 is a negative number" contemporary to the time of the begin of the Trionfi decks (so somehow 1420-1460).

More than 16 special cards has the standard Tarot. The number 17 is taken by the STAR or the MOON, none of both has a very bad character. The bad character in Tarot has the Tower, which has Nr. 15 or 16, not 17. In Minchiate Prudentia had gotten the Nr. 17, again, Prudentia isn't such a bad card. 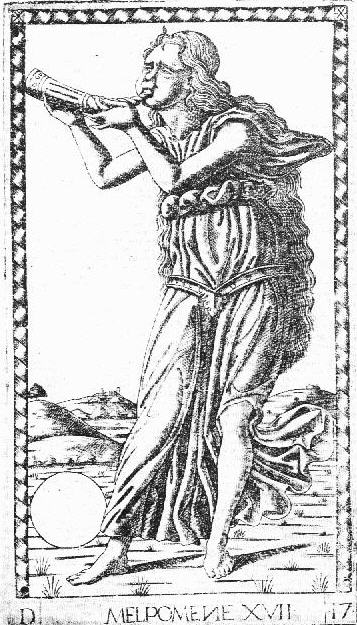 During 14th century there is much interest in chess and geomancy, both connected to the number 16. We can add to this the object of Bruzio Visconti ( viewtopic.php?f=11&t=862&hilit=1349&start=20 ) with 16 elements.
Somehow these are complete models of the world, the number "17" looks to them like a dangerous foe from "outside of the system". Perhaps this was the danger, that the early Pythagoreans saw in the 17. 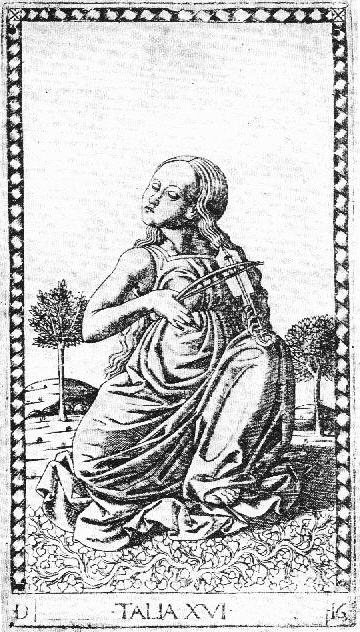 16 Thalia Comedy is the counterpart to 17 Melpomene Tragedy

Well, the standard playing card deck had been 4 suits and 13 cards in each suit. .... 4+13 = 17
Soldiers threw their cards away, when they went to battle. There was the believe, that cards attracted death. At least, that's occasionally reported.
Huck
http://trionfi.com
mikeh
mikeh

This is the statement we can find no authority for - "Poiché di venerdì 17 morì Nostro Signore,..."

I take it that it's merely a typo, and Andrea only intended "Friday," not "Friday the 17th."

I asked Andrea about the "17" and he removed it from his essay.
mikeh
mikeh

19 by mikeh
I have been reading A Renaissance Wedding: The celebrations at Pesaro for the marriage of Costanzo Sforza & Camilla Marzano d'Aragona, 26-30 May 1475, introduced translated and edited from the Italian by Jane Bridgeman, 2013. Two things of relevance. First , p. 47:


As the most illustrious Lady Camilla of Aragon neared the territory of Pesaro on Friday, 26 May, with the entourage provided by his sacred majesty King Fedinand, her uncle, as a gift to the most illustrious lord Costanzo Sforza of Aragon, thirteen young men, dressed as nymphs in white, were sent out to meet her. One represented the godddess Diana with headdress, arrows, a bow and other symbols of the huntress. ...

Then for the wedding banquet, what is of interest is how many sat at the high table (p. 61):

In other words, 13 people in all, with 6 at the bride's right and 5 at the groom's left. This is confirmed in the appendix where each guest at this table is described in more detail.

Otherwise, there were eight other tables with 12 guests each.

The meal itself was divided into 6 courses presided over by the Moon and six courses presided over by the Sun (Ibid). There was "a circular door in the zodiac on the hall ceiling," which opened so that an impersonation of the Sun descended, who recited the opening verses. He also descended at the end of the banquet, again through "the door in the middle of the zodiac" (Ibid. p. 94).

Here at least, there is nothing foreboding about the number 13, in fact perhaps the opposite. 12 is associated with the zodiac, with the 13th in that series as the Sun.

20 by Nathaniel
Interesting. So we can conclude that the superstition about 13 wasn't universal among the Italian nobility in the 15th century, at least.