mikeh wrote: 15 Oct 2019, 08:18 Thanks for explaining the difference between the two towns' versions. Perhaps you can say more about "calling for a trump". Not just any player can "call", I observed - most just "passed". I thought it had to be one of the "aire", too, that was called for. Perhaps you know more. I don't fully understand.

Tarot games with bidding typically have two or more bids. The highest bid is usually "solo" where the winning bidder (known as the declarer) plays against the other three. In many games "solo" does not allow the declarer to swap cards with the stock but the Mineo game allows for it. The lower bid(s) lets the declarer have a secret partner and swap cards with the stock. How one bids is based on confidence in the strength of one's hand vis-a-vis what one thinks the hands of the others are like. Winning "solo" awards doubled points but losing can be devastating. In most games, it is quite common for everyone to pass which could lead to everyone playing for themselves. In the Mineo game, if everyone passes the player with the highest trump is treated as having done the lower bid.

In most trump calling games such as those in former Austria-Hungary, the declarer is forbidden from calling a partner that holds the top two or three trumps. Naturally calling the highest trump you don't have is the best course of action. In Mineo, there is no restriction and you can call any of the top five trumps but not the lower trumps. In both the A-H and Mineo games, there is also a fake partnership gambit. The declarer can call a trump he already has. He is in effect playing against the other three but his opponents are left second-guessing each other until that trump is revealed during play.

Given that Bernardino was active in 1428, it strikes me that the passage in question might be about the saint's activities then, from which we can deduce nothing about when the date was written there, except that it was after 1428, perhaps well after, given the saint's fame, if it is about him. He died in 1444; perhaps it is part of an obituary. That would make it closer in time to the "Charles VI" as dated by Depaulis (c. 1460).

Wasn't it stated once, that the text on the cards had a juristic background? Or was it only suspected? Possibly just by us? Bernardino influenced many city laws, so "Bernardino 1428" could refer to one of the many Bernardino's reforms. A reference to an earlier "law with date" would have a natural role in a juristic text. Naturally not of much value to serve as hint on the dating of the card deck.
Huck
http://trionfi.com

14 by mikeh
Huck: A juridic context was only advanced as one possibility, by an audience member who didn't know that "Bernardin..." was also there with the "1428". I do not know examples where Bernardino is cited juridically, much less any referencing 1428.

Thanks for your full explanation of "calling", Ludophone.

mikeh wrote: 19 Oct 2019, 01:01 Huck: A juridic context was only advanced as one possibility, by an audience member who didn't know that "Bernardin..." was also there with the "1428". I do not know examples where Bernardino is cited juridically, much less any referencing 1428.

"The penitents, we are told, flocked to confession "like ants", and in several cities the reforms urged by the saint were embodied in the laws under the name of Riformazioni di frate Bernardino."

As a first known case of this "Riformazioni di frate Bernardino" is given for Perugia, November 1425. According ...
https://books.google.de/books?id=hN62Dw ... no&f=false
Huck
http://trionfi.com
mikeh
mikeh

16 by mikeh
Very nice, Huck. It seems we are making too much of this reference to Bernardino, given that his name would have been invoked in legal contexts, which were among the most often recycled when there were errors or the documents were no longer to be kept.

I wrote Emilia Maggio about this and other things, and she wrote back that we cannot even assume that the Saint is who is meant, as "Bernardino" was a common enough name. So it seems we are back to not having any idea when after 1428 the recycling would have occurred.

Emilia also sent me the article in The Playing Card where she talks about the stag-rider being the Fool. It is in her article on the stag-rider, naturally, the last part. I will upload them with links when I get a chance, as an edit to this post. Added later: I did a new post instead.

She says that the catalog has already sold out and they are doing another print run. She thinks it is online, too, but doesn't have the details yet.
mikeh
mikeh

17 by mikeh
here are links to the last section of Maggio's article and part of the preceding. Strictly speaking, it is only the last section that deals with the "fool" interpretation, but the previous section deals with a Borso Bible illumination whose putti might be construed not only as "good" and "bad" and "sacred" vs. "profane" but also as wise and foolish, considering that the text above the illustration not only concerns good and bad lives but is fin the Book of Wisdom. The Borso Bible also has the advantage of being from the milieu of the cards, unlike the mostly Northern European examples she gives otherwise.

Here are the relevant 3 pages at the end. Previous pages go into how riders on stags and other animals symbolize vices in some art of the time, and on how the rider is likely to be male.

I am not myself convinced by Maggio's argument. The stag in Borso's Bible could just as well represent "longing for God", as in Psalms 42:1, with the water, like that of baptism, dissolving away evil, which is why the stag drinks from it (having, in Augustine's metaphor, eaten some snakes), and why it is foolish to keep it from doing so, as the putto on the right is doing.

Closer in time and place (Florence) than Borso's Bible is an Annunciation with saints Eustace and Anthony Abbot by dal Ponte from the 1410s with a stag (Giovanni dal Ponte, 2014, p. 91). The legend was that Eustace was converted when he came upon a stag with a crucifix in its antlers. Since the saint is holding up the stag, it seems to be a positive symbol. there a positive symbol, perhaps "trust in God". 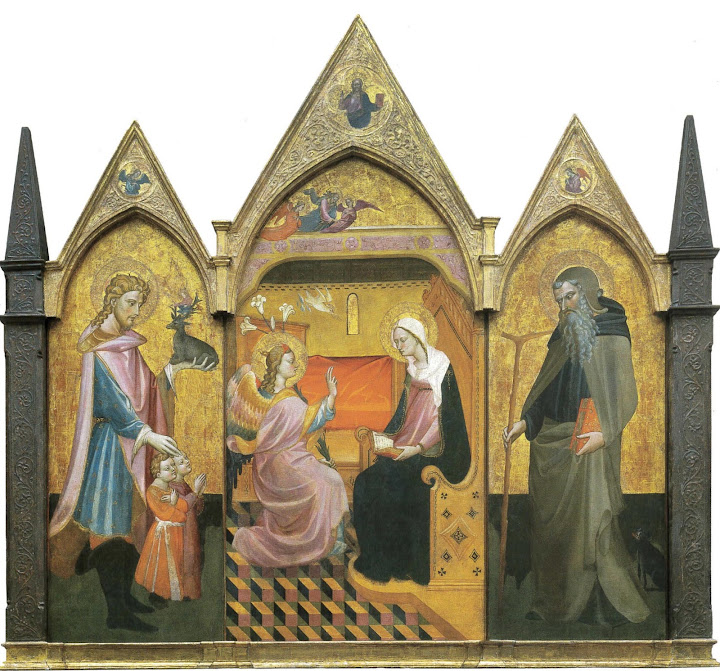 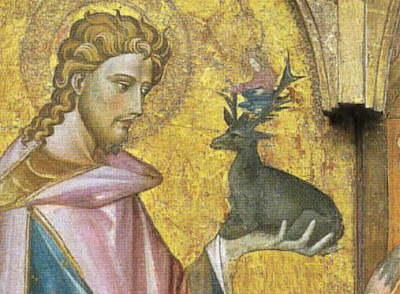 On the tarot card, the stag might have the same meaning, so that the water is that which extinguishes the fire of concupiscence, as it does in one conventional image of temperance, that of the lady with a cup of water in one hand and a torch in the other (or a fire at her feet, as in the Anonymous Parisian). If the examples she gives of animal-riders were mainly on stags, her interpretation would be clearly right. But they are mainly on goats, a well-known symbol of lust. The stag is more ambiguous.
mikeh
mikeh

I misheard or misremembered Maggio

18 by mikeh
I double-checked with Emilia Maggio about whether she really had changed her mind about the dating of the Catania-Palermo cards, from c. 1435 to c. 1445. Apparently I misheard her. She says she still sticks to c. 1435, as she argued in her 2016 article in The Playing Card. She says it was Depaulis, who was in front with her during the question period, who said c. 1445. My apologies to Emilia and to those who read my earlier report. I thought she was now agreeing with Depaulis, but I now see that I was wrong.

19 by Ross G. R. Caldwell
I'm surprised Thierry is willing to go that low in the dating. Of course I am willing to go into the 1440s, but 1435 is just a tad too early. It is contradicted by the chronology Simona Cohen has established for the invention of the allegory of Time with an hourglass, i.e. shortly before 1450. Until someone can show me how Cohen is wrong, I think it is a rock-solid baseline for the dating.

20 by mikeh
Rereading Maggio's email, I see that she doesn't say that Depaulis dated the Catania to 1445 (much less 1435). She said, after mentioning both the Catania and the ChVI (but the latter last) she said "it has been dated to 1445", and I jumped to the wrgong conclusion. Rereading, I think it is the Charles VI she was referring to, and it is she who dated it so, in her 2016 article. Thanks for catching that. Added later: There is nothing in her email about anyone dating the Catania to 1445. I thought I heard that date mentioned in the presentation, but I am now unsure if anyone said it about the Catania.

About Cohen: One problem of relying on her is that there isn't much surviving depiction of time before 1450 in Florence anyway, a mere handful, 4 manuscripts and 2 cassoni (p. 303). We have no idea what is lost, especially in cassoni.

She says that even up to the 1480s it was the man holding the sphere that predominated (304):

These Florentine illustrations created before 1450 provided the dominant prototype for the subsequent iconography of the Trionfo del Tempo until about 1480, and in some cases long after.

In the next decade, she says that there is only one cassone with Time on it, which is the one with the hourglass (311, pictured 312), and a series of manuscript illuminations; she shows us one from 1456 (although I can't find the hourglass) and another from 1459.

Approximately one-fifth of the extant Trionfi manuscripts belong to the decade between 1450 and 1460. With the exception of three from northern Italy, the illuminations are all Florentine.'~ The scene of the Trionfo del Tempo is found on only one Florentine cassone during this period. The fact that the Trionfo del Tempo was not always included in the Trionfi series on cassoni, as attested by several fragments assigned to this decade, can probably be attributed to their function as marriage chests.

I think she is referring to a series by Scheggia, which sometimes is dated to the 1440s. These dates are very fluid. The artist closest in style to the Catania, I think, is in fact Scheggia, who did cassone fragments of Love, Death, Fame, and Eternity, but not Time as well as the cassone lid similar to the Stag-rider.

It would seem, from Giusti document of 1440, that the cards came first and then the fashion for illustrated Petrarchan Triumphs (I did a pretty thorough search a few years ago, hardly any datable before 1440). Surely the Old Man or Hunchback was among the cards of c. 1438-1440. Do you think the cards of that time would have had him holding a sphere, then changed it to an hourglass? 1450 is when the game was legalized, so that its imagery could be more legitimately represented in places that confer status, like mss. and cassoni. So the hourglass could reasonably go from the cards, all or most of which are lost, to other media.

Added: If the cards had the hourglass in 1440, how do we account for the sphere in the cassoni and manuscript illuminations of the early 1440s? The latter were done by different people, drawing on medieval tradition -and Petrarch's cosmic time, defeating Fame over eons - to meet the new demand (small at first) for Petrarch illustrations. The cards took the other aspect of Petrarchan Time, that of the brevity of life (Cohen p. 302), symbolized by the hourglass, and it wasn't until 1450 that they finally made an impact on other media.

Added: by "Cohen" I mean Renaissance Studies Vol. 14 No. 3 , "The early Renaissance personification of Time and
changing concepts of temporality", by S. Cohen, which I think is in JSTOR.

Return to “The Library (North Aisle)”