Iconographic Tarot studies start with the problem, that one should know (at least) the old Tarot cards and further possibly also the younger developments.

The articles of Andrea Vitali have collected most of the older pictures ... the articles are shown (for the "Sun") at

Further you have a lot of single pictures at

and with the navigation you (probably) find them all. 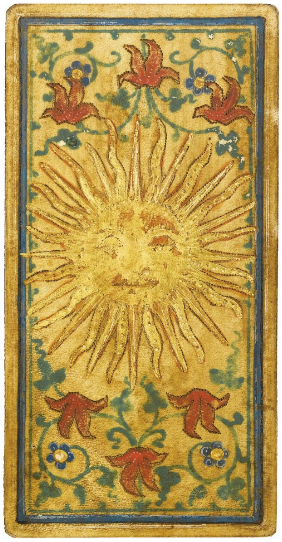 "It seems, that there was an auction and a sale of

In private discussion Andrea Vitali expressed doubts, if the card is "really" from 15th century, pointing to some other cards, which were researched with the carbon technique and so with evidence of a later time, though from their appearance one would give them to 15th century.

According this statement (for instance) the following card, made according the usual Visconti-Sforza Tarot ...

Huck wrote: ...the following card, made according the usual Visconti-Sforza Tarot, is given to 17th century

Personally, I find a 17th century dating very unconvincing. These cards seem to me very far both from the baroque style that was current at that time and from know tarot cards of that century (e.g. Mitelli). I think that this deck must either be a XV century original or a XX century forgery.

4 by Ross G. R. Caldwell
yes, I really like that new Sun card. I looked at it closely, for numbers or any hint of writing, and found nothing.

I can't believe 17th century either. I don't know how carbon dating would settle that, since the paper comes from different sheets, the glue, the pigments too are mixes, and there is plenty of time for contaminaton from all the places the card has been.

I tend to think that forgeries of the large 15th century style cards could only have become finacially feasible in the 19th century - but even then, for an artist to mimic the style of a 15th century artist is very hard. Since the 16th century, it has been almost impossible for artists to forget things like "perspective"; they can't draw naïvely like medieval artists.

... NO. Andrea Vitali is specific on this ... and I can only rely on his authority.

According to Andrea there was something like a Neo Gothic movement in Italy (around 18th century) and they made between other things "old cards". More than this ... Andrea Vitali expressed his opinion, that the Rosenthal Tarocchi (shown in Kaplan as "old") would be of this period. Andre Vitali's opinion is according his private statements based on the opinion of unnamed art historians focussed on this period.

Well, these Neo Gothic painters (or other "forgeries") might have painted according to "really old" playing cards, which still existed then.
So the state of the Rosenthal Tarocchi is in any case, "that one doesn't know". Some cards may be copies of "old cards" (and indeed are at least "copies") and others possibly not.

This doesn't relate to the new "old sun" ... for Andrea this card is also "new" (as far I got it), so there exists no research with carbon methode. But he is suspicious by experience.

Ross: NO. Andrea Vitali has presented a series of pictures made during 16th -19th century.
Huck
http://trionfi.com

6 by Huck
For the iconographical study of this "new sun" (forgery or not forgery, or perhaps better called "remake", if it is a forgery) it should be worthful to improve the information: there is also a "new star" card and we simply don't know it. That's a bad state.
A "Christina Quartini" judged the card to be of 15th century ... she should know also the Star card. Further there might be old web informations in preparation of the auction, which are lost now, but possibly still living in an archive.

Christina Quartini as author wrote about miniatures in the Sforza time - this should be the person.

Generally this sun looks like the heraldic sun of the Barberini family: The sun with a face in heraldic is called "sun in splendour" - generally.

A sun in splendor appears variously in the "Splendor Solis"


Wikipedia wrote:Splendor Solis ("The Splendor of the Sun") is a well-known colorful alchemical manuscript. The earliest version, written in Central German, is dated 1532-1535 and is housed at the Prussian State Museum in Berlin. It is illuminated on vellum, with decorative borders like a book of hours, beautifully painted and heightened with gold. The later copies in London, Kassel, Paris and Nuremberg are equally fine. In all twenty copies exist worldwide.

The original of Splendor Solis which contained seven chapters appeared in Augsburg. In miniatures the works of Albrecht Dürer, Hans Holbein and Lucas Cranach were used. The author of the manuscript was considered to be a legendary Salomon Trismosin, allegedly the teacher of Paracelsus. The work itself consists of a sequence of 22 elaborate images, set in ornamental borders and niches. The symbolic process shows the classical alchemical death and rebirth of the king, and incorporates a series of seven flasks, each associated with one of the planets. Within the flasks a process is shown involving the transformation of bird and animal symbols into the Queen and King, the white and the red tincture. Although the style of the Splendor Solis illuminations suggest an earlier date, they are quite clearly of the 16th century.

Albrecht Dürer made this painting 1512 - the combination of sun, moon and basilisk is interpreted as "eternity"

The first manuscript edition is given to 1532-35, Augsburg (this was in the time, when in Augsburg the Fuggers were very rich) and it is now in Berlin.

As one can see from this source, at least one painting (and probably all) are almost identical to the British Library edition of 1588 ...

and the British library edition is here (and some other info):

and here is one of 22 "very nice pictures"

... but also others of the pictures include the "sun with face".

Well, cause it has 22 pictures occasional the assumption was thought, that these are Tarot references or somehow related, but if they are, there is a curious game made ... and I think of "very special German humor". Indeed we find at

... so looking only at these 3, one might think, that there is a Tarot relation.

but there the 7 planets are involved and these appear at picture 13-18 in this form (at the top):

... so the author made Saturn with 2 pictures, indicating Saturn's transformation.

The suspicion is given, that the author knew the Tarot, but made a joke of it, organizing it in a way, that it is turned into something else.

picture 20 shows "many children"
picture 21 shows "woman at work"
picture 22 the sun above a city ... which city? I would bet, that this is Augsburg.

Reading now the story of "Salomon Trismosin", who learnt the art to make "gold from silver" in the year 1473 ... then we have Jacob Fugger (* 1459) who made a lot of money with silver mines, and he was in 1473 14 years old and in the right age to wander and to make his own experiences. In the story Salomon meets a person named "Flocker" and he learns something from him ... "Flocker" sounds like "Fugger".
Jacob Fugger died in 1425 and the typical reformatoric very special and somewhat sarcastic German humor was at his height. Fugger had become the richest man in Europe. Surely a lot of stories were running, that he made money with "strange tricks".
"He could make gold" ... if this was told of somebody with right, who could have been the "real person" of this time? Of course, this must have been Jacob Fugger.

The text was made in Augsburg, 7-10 years after the death of Jacob Fugger, rather obviously commissioned by somebody with some money, so probably either a descendent of Fugger or somehow in relation to the family.

And in the text Salomon preaches: "if you know how to become rich, don't tell the mystery anybody."

So we have here the picture 5 and that is the Pope card (in Tarot): And I surely am not an alchemist or a specialist in matters of alchemy , but I get my personal foolish German grin, when I observe such things.
Huck
http://trionfi.com
SteveM
SteveM

7 by SteveM
The Golden Ladder of the Sun:

8 by SteveM
Beneath the light of the World

Beneath the light of the World,
the Sun, stand the shepherd Kings,
twins Romulus and Remus:

before a wall of bricks stand
the City building brothers;

above the light of the World,
the Pope: Shepherd of Shepherds,
the Bishop of Rome, on high

above the conquered founders
of an Empire made Christendom.
Immature poets imitate; mature poets steal; bad poets deface what they take, and good poets make it into something better, or at least something different.
T. S. Eliot
SteveM
SteveM

SteveM wrote:Beneath the light of the World

Beneath the light of the World,
the Sun, stand the shepherd Kings,
twins Romulus and Remus:

before a wall of bricks stand
the City building brothers;

above the light of the World,
the Pope: Shepherd of Shepherds,
the Bishop of Rome, on high

above the conquered founders
of an Empire made Christendom.

That is, if the 21 trumps of the Tarot de Marseille pattern are laid out in a 3x7 grid, the light of the World the Sun, is above the light of the world the Pope, and both 'lights of the world', the Sun and the Pope, have a vignette of a couple beneath them. Similarly we may note that the deceiver of an Ephesian juggler old Adam is below the great deceiver the Devil above, the popesse (which we may interpret as faith or the church) below the house of God, the empress, wife and mother of king of kings is below the star, sign for the birth of the king of kings, the light of the world emperor beneath the light of the world the moon, cupiditas is below caritas, and the chariot of 'the little world' is below the greater world above (which also bears the four holy animals of the Chariot in Ezekial's vision), or the triumphal prince as groom is below his bride, the City, Jerusalem represented by a maid (as was common in triumphal entries of the king into the city), relating to my crackpot theory that the triumphal prince completes a rank of seven cards that mirror the Augustinian concept of citizenship of the two cities as dependent upon the object of one's love, not one's position in society. From perfect love arises the virtues by which one triumphs over the viscitudes of life towards the perfection of the soul, thus the middle rank of seven cards defined a virtue beginning, middle and end.

Re: the poem note that another name for Gemini (the twins, castor and pollux (on whose ship St. Paul was brought to Rome, romulus and remus (founders of Rome)) is 'bricks' or 'pile of bricks'.
Immature poets imitate; mature poets steal; bad poets deface what they take, and good poets make it into something better, or at least something different.
T. S. Eliot
SteveM
SteveM

SteveM wrote: Re: the poem note that another name for Gemini (the twins, castor and pollux (on whose ship St. Paul was brought to Rome, romulus and remus (founders of Rome)) is 'bricks' or 'pile of bricks'.

Note also that the crucifixion of Christ is said by a variety of sources to have taken place under the consulship of the two Gemini at Rome. By which the sign Gemini by nature of a pun on the two consuls name comes to symbolise the end of Christ's passion.

"Christ died when the two Gemini were consuls."

"The Passion was finished when Rubelius Geminus and Fusius Geminus were Consuls."
Immature poets imitate; mature poets steal; bad poets deface what they take, and good poets make it into something better, or at least something different.
T. S. Eliot