2 by marco
In another thread we discussed images from a prophetic manuscript in which the devil appears next to a "burning tower".
I recently found that this iconography is also suggested by Dante. Here is an example from a 1497 edition with Landino's commentary. I think that more ancient examples could also be found.

The entrance of Hell is defined as "alta torre" (high tower).
Beginning of 8th canto of the Divine Comedy:

I SAY, continuing, that long before
We to the foot of that high tower had come,
Our eyes went upward to the summit of it,
By reason of two flamelets we saw placed there,
And from afar another answer them,
So far, that hardly could the eye attain it.

And I: "Its mosques already, Master, clearly
Within there in the valley I discern
Vermilion, as if issuing from the fire
They were." And he to me: "The fire eternal
That kindles them within makes them look red,
As thou beholdest in this nether Hell."

3 by Pen
Marco, thanks for that first link to the wonderful images and discussions relating to The Star, as well as The Tower (as well as your post on this thread). It would be good to collect many of the images elsewhere on site and post them here, in Bianca's peaceful garden to peruse at leisure...

The closest analogues are a Botticelli illustration of the Tower of Babel for Dante (Purgatory XII), late 15th century; 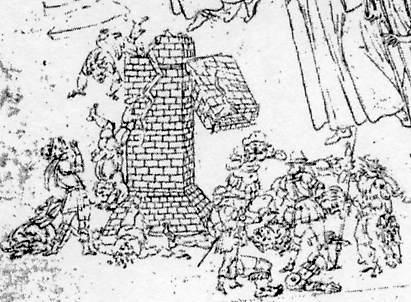 the Telesforo prophecies from Ferrara, around 1450 (and I should add the innumerable other depictions of the Apocalypse which include cities being destroyed by fire from heaven) -
viewtopic.php?f=14&t=322 (the Tower is burning, but it is not crumbling, it is true) 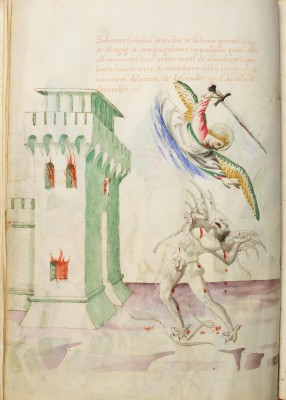 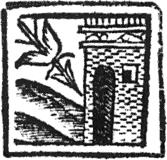 
robert wrote:
The "Tower" card is called "The House of God" on the Marseille decks. Round objects are shown "floating" around the Tower.

On old Italian decks it was called "The Lightening", "The Thunder", "The Arrow" or "The Fire".
http://www.tarothermit.com/tower.htm

On the Vieville deck and Belgian Tarots, a figure stands, with goats or sheep, beside a tree and objects fall from the sky.

When doing a search for House of God, I noticed that the name was the same as "Beth-El", and thought that was very intriguing, and then discovered that Bethel was also the name for meteroites... voila! Back to the Tower card again.

So, with *my* understanding that the images from the Tarot de Marseille existed before the titles and numbers were added, I tend to think of the titles as what the "title-maker" thought was being pictured.

THE question: Is what is being pictured on the Tower card a Meteorite Shower?

Are we looking at "Bethels"? Does the "House of God" refer not to the tower, but to the "Thunderballs" in the sky? Would this explain why the "tower" itself isn't on several related cards, because the tower isn't really the subject? Does the alternate titles support the idea that it's the event in the sky that matters, not the tower itself?

It got even more interesting to me when I started working based off of Jean-MIchels images of the "Flight to Egypt" and the "Fall of the Idols", as carved in medieval European churches such as this:

That's an image of the Fall of the Idols, and it looks very similar to the Tower of the Tarot.

Jean-Michel as found these images of comets and events in the sky:

Marco added this one: Here's a page that talks about the flight into egypt, and has another version of the Tower image :
http://egypt.cla.umn.edu/Flight.html

Which looks like the same as the one Jean-Michel posted from the Abbey Church of St Peter in Moissac, circa 1130s.

This image connects the Fall of the Idols with the Flight into Egypt.


Another site from Egypt about the "Holy family in Egypt":
http://www.touregypt.net/holyfamily2.htm
With this image which I find really interesting showing the Flight, and an object in the sky (supposedly from "Coptic Museum, Old Cairo":

So... there's nothing to really tie this all up together. It's a bunch of interesting "six degrees of separation" that could mean something, or nothing at all.

One more little piece to go back to the question of a connection between the Devil and the Tower, is to look again at the Minchiate with the image that might be the "Expulsion", but could also be the "Harrowing of Hell"

So it could be that here the Tower is connected with Hell, that's one that comes to my mind.

As much as I love Jean-Claude Flornoy,I'm not convinced at all that the Vieville is somehow connected with the "stone cutters", it's a nice fable, but I've never seen anything to argue the point. The faces on the devil have always been explained (as far as I know) as showing his "appetite", his "insatiability". It's easy as well to imagine, especially with the eyes often shown on the wings and body, that it is also his being "always on the watch" for an opportunity to mislead and tempt.

8 by Corsufle
I have been reading a little art history and iconography and came across this information:

St. Barbara's attribute, often shown in paintings of her, is a tower with three windows. Her (highly condensed) story is that she was locked in a tower by her father. She made the builders put 3 windows in the tower to symbolize the Christian trinity (her father had specified 2 windows). Father was enraged at her Christian conversion and decapitated her. Afterwards, father was reduced to ashes by lightning or fire from heaven.

Looking at Noblet or Burdel for example, I see:

1. a tower with 3 windows
2. the head of the tower decapitated
3. lightning and/or fire from heaven

In other words, the Tower card contains the most essential elements of St. Barbara's story. Her story is found in versions of the Golden Legend.
"Music is nothing but knowing the order of all things" - Hermes Trismegistus

I think the first time I ever encountered the connection between the Tower and St Barbara was in Robert M. Place's Tarot of the Saints, (which is still one of my favourite decks). Here is his image for the Tower:

Several years ago, several of us on this forum were involved in a discussion on Aeclectic that pretty much vanished in a crash on the server, but the main gist of the discussion was what connections could found between tarot and depictions of saints.

I was personally playing with the idea that maybe tarot evolved out of some sort of souvenir system, where images were traded like modern trading cards, only instead of baseball heroes or anime characters, these would have been saints, and people would have traded and collected them, possibly obtaining them from shrines they had visited. And with tarot, we ended up with a sub-selection of them. Of course, there isn't one shred of evidence to support this wild idea, and one would think that there would have been lots of collections left of these so-called trading cards, so it's just a fantasy that I entertained at the time.

Saint Roch, for instance, might make an excellent Fool.
http://en.wikipedia.org/wiki/Saint_Roch

The Hermit could have been one of the "Desert Fathers" such as Saint Anthony:
http://en.wikipedia.org/wiki/Desert_Fathers

But for many of the cards, it's a real stretch to find a match worthy of serious consideration. Nevertheless, there are some cards, such as the Tower, that really do remind us of some of the saints.

Here are a few St Barbara images worthy of their towers. And this lovely one of her crushing her infidel father! Domenico Ghirlandaio, c. 1473 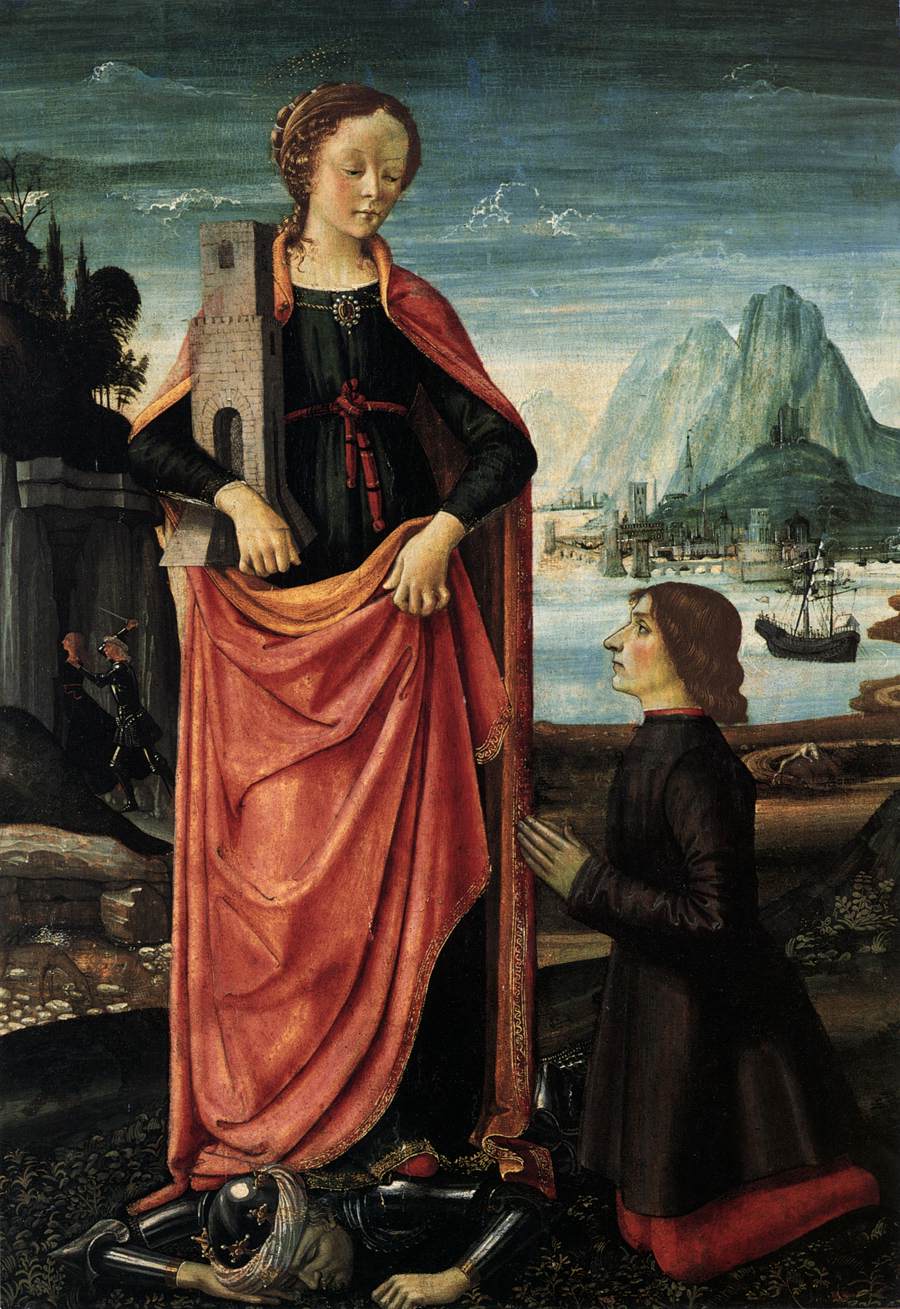 Thank you for mentioning this and bringing it into the discussion.

The wrathful and the sullen in Styx; Dante and Virgil before the tower with two lights; the tower of Dis with one light.