21 by Lorredan
In the half card on the Cary Yale sheet...thought to be Strength.
The figure has 'billowing hair" (Kaplan) No hat of any sort- not even half a hat.
The left arm reaches down to the Lion's mouth but what interests me, and I do not know if has been discussed before but on the shoulder appears to be armour not a rolled sleeve. It is distincly different from any Tarot de Marseille style-the sleeve top is very reminscent of the armour on the Sola - Busca Tarocchi Cards 1, 11, 1111 (Mario) for example.
It is not at all like the women's sleeves on the remainder Cary-Yale.
~Lorredan.
If some one could post it here that would be great.
The Universe is full of magical things patiently waiting for our wits to grow sharper.
Eden Phillpotts

22 by Lorredan
I meant to add it is like the sleeve top of the Emperor on the cary yale sheet.
The Universe is full of magical things patiently waiting for our wits to grow sharper.
Eden Phillpotts
SteveM
SteveM

23 by SteveM
Here is both lion and columb as a symbol of fortitude/sforza:

24 by Jim Schulman
The strength engraving in the "Mantegna tarot" shows an athletically proportioned armored figure wearing the Nemean lion's head whose mane has flowing locks. She is breaking a column rather than shushing (?) a lion, but maybe there was a common model for both illustrations

25 by Lorredan
Thanks both Steve and Jim- I will go with question to cary Yale sheet thread.
~Lorredan
The Universe is full of magical things patiently waiting for our wits to grow sharper.
Eden Phillpotts

26 by debra
She is half-eaten by that lion, to my eye.
mikeh
mikeh

27 by mikeh
Here is another "Samson and the Lion", which I post because the pose is particularly close to the Cary-Yale, Cary Sheet, and the Marseille-type. It is from Les Enluminures du Louvre: Moyen Age et Renaissance, ed Avril, Reynaud & Condellier, 2011, p. 31. It is from a Biblia pauperum (Pauper's Bible). The blurb says (p. 30): 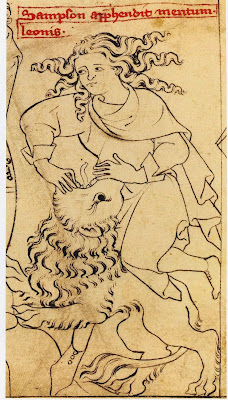 lorenzo_lotto.png Viewed 14939 times 490.62 KiB
Translation of the web page description:
Fortitude is depicted as a young warrior who, without apparent effort , is preparing to throw a marble column against another woman submitted to her, adverse Fortune, in an aerial fight. The latter, naked and made awkward by her evident imbalance, is caught in the moment of her fall from the top of a globe or from the stern of a boat that is sinkin , while the furious wind of the storm has already broken the mast and ripped the sail. The composition of the painting recalls, albeit specularly inverted, that of the Archangel Michael and Lucifer, and like that, it was included in the list of works made lottery in Ancona in 1550 and sold for four scudi. The allegorical intent is overtly directed to underlining the primary value of Fortitude, an inner resource, as opposed to Fortune, which turns like the wind, filling the sails of the ships, and a moment later breaking the mast.
Kate
Kate

This panel is part of a set of four, which originally formed part of a dressing-table with a mirror belonging to the painter, Vincenzo Catena. The first of these other three panels is variously entitled “Lust” or “Perseverance.” It depicts Bacchus in a chariot with a bowl of fruit tempting a virtuous man or the personification of perseverance which, in turn, has links with fortitude, temperance, or prudence. The second panel pertains to prudence. Much controversy surrounds interpretation of the fourth panel, which has been variously linked with falsehood, wisdom, or rebirth/regeneration.
137alle1.jpg Fortuna Not downloaded yet 116.61 KiB
137alle3.jpg Lust or Perseverance Not downloaded yet 123.52 KiB
137alle4.jpg Prudence Not downloaded yet 139.04 KiB
137alle2.jpg Falsehood/Wisdom/Rebirth/Regeneration Not downloaded yet 133.41 KiB