11 by Huck
Michael J. Hurst recently presented the link ...
http://commons.wikimedia.org/wiki/Petrarch%27s_triumphs
... which contains pictures to Petrarca's "Trionfi poem"
Two hermits, both from 1442, differ in their style from later pictures: 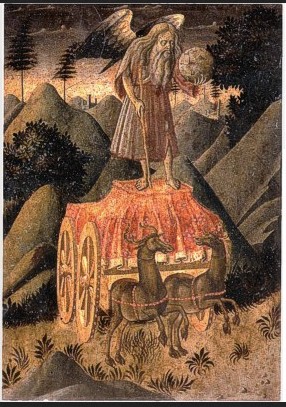 There are some more interesting pictures ... thanks to Michael, who collected them: 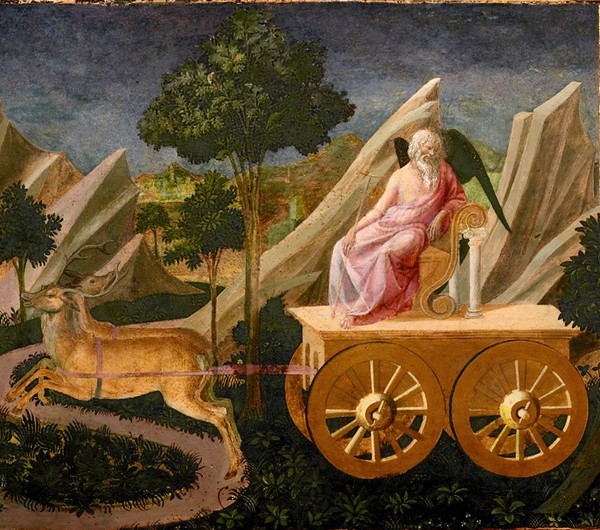 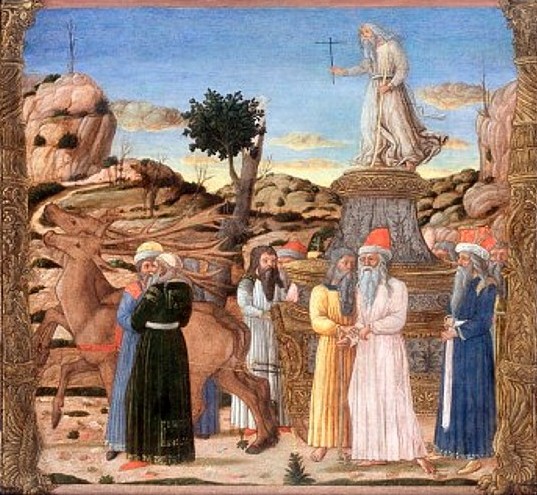 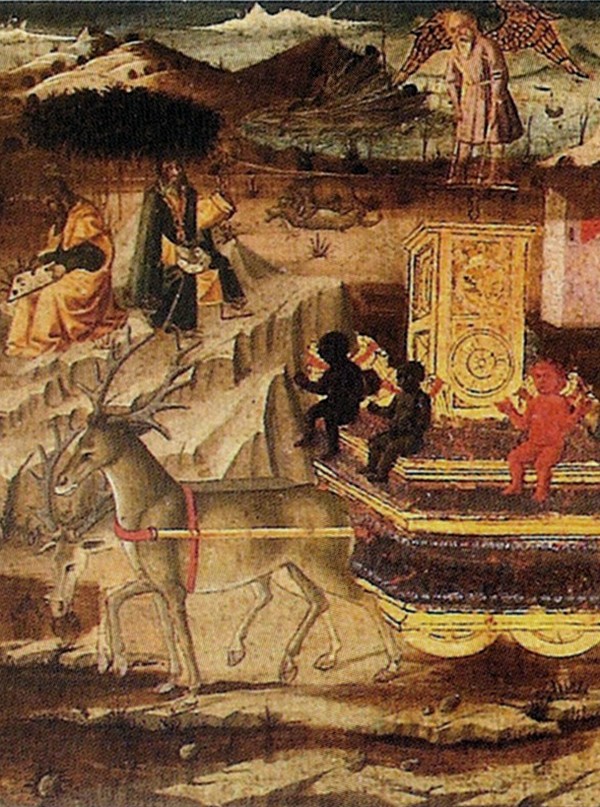 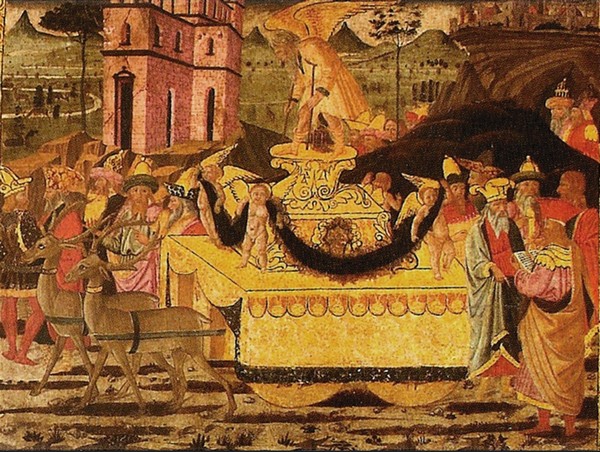 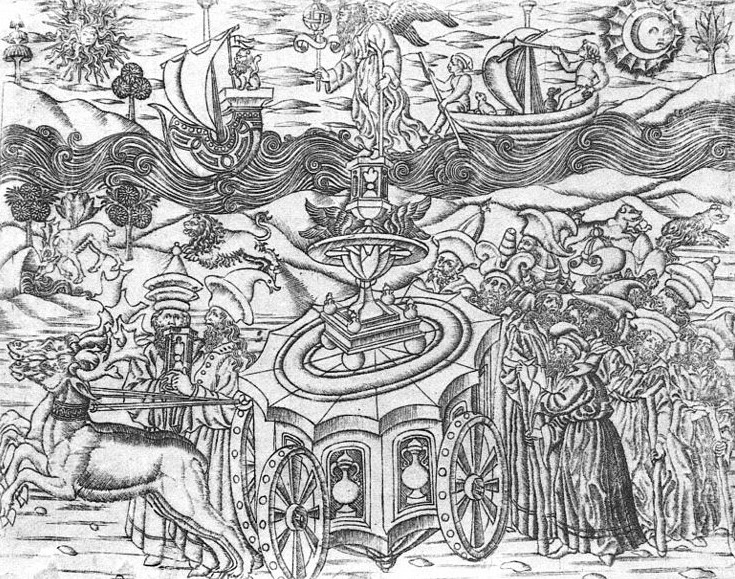 12 by Huck
Simona Cohen in "The early Renaissance personification of Time", p 311.: 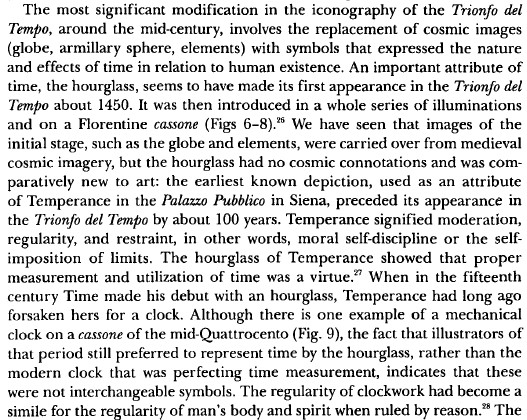 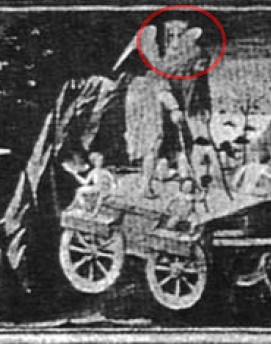 I don't discover the hour-glass clearly, but likely it's on the back of the hermit 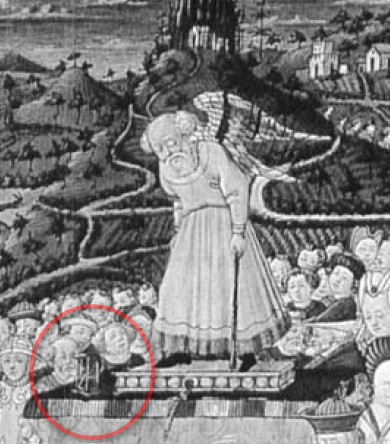 hour-glass on the chariot 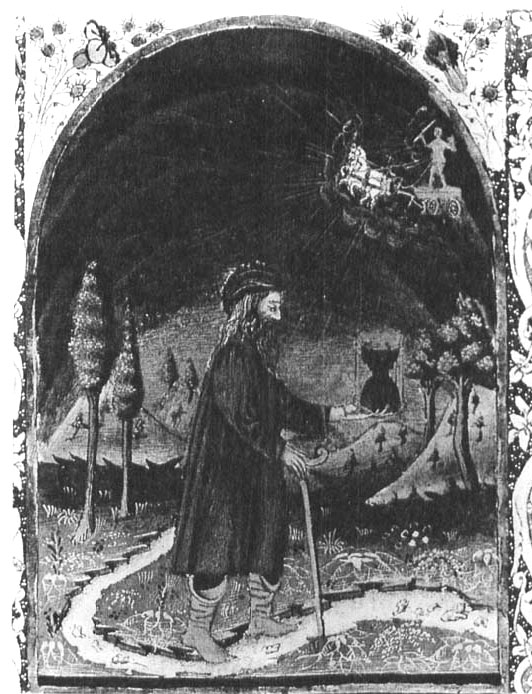 Figure 9 (hermit with mechanical clock) should be ... 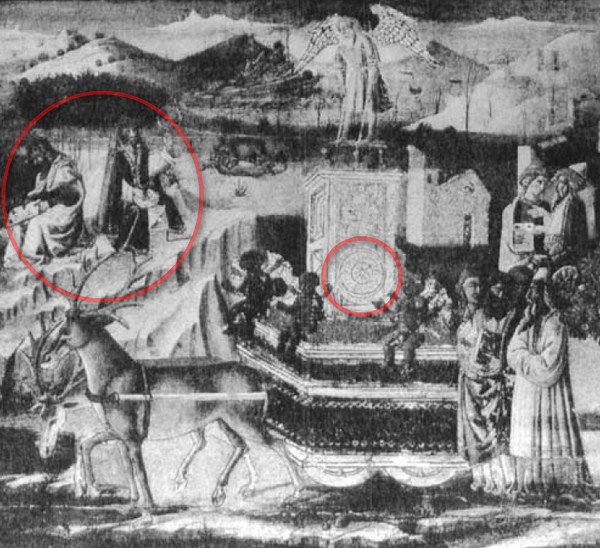 ... which is the same as from the list of Michael J. Hurst. The two men are time-counters (?) ...just my speculation. The read putti on the chariot looks a little bit like the figure of the world at the d'Este cards. 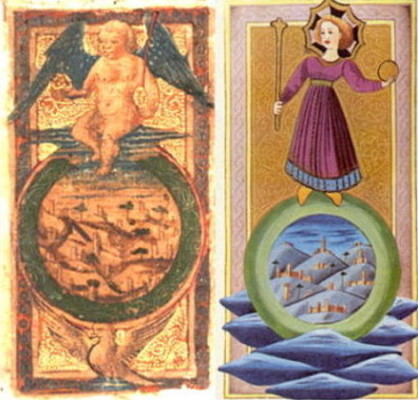 Cohen notes a 100 years earlier Temperance with hour glass, which should be this one ...

Later, as Cohen notes, the hour glass is given to Father Time (with the idea of a finishing death), and the mechanical clock (with th idea of steadiness) becomes a symbol of Temperance.
In matters of the Tarot sequence in the Western order we have, that 14 Temperance follows 13 Death and the Hermit is "before Death) ... maybe the idea, that the steadiness of time overcomes "individual death".

As a summary: if the Pierpont-Morgan-Bergamo Hermit is really from 1450-1452, it would be rather early for this motif. 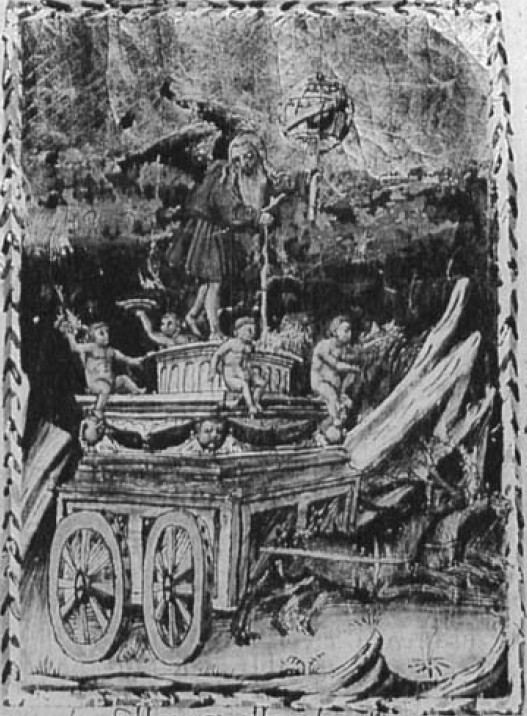 mikeh wrote:Huck, there's also Cohen's figure 1, which she dates to precisely 1442, in Florence.

This I had already one post before, Michael's picture show had it also.
Huck
http://trionfi.com

Moakley's Tapestries at the Met

That is a very special Triumph of Time, from the Metropolitan Museum.

There were two tapestries in that 1935 bequest.

At first I barked up all the wrong trees: were they connected with magic? alchemy? witchcraft? Were they some kind of secret code? It gradually became clear to me that they were more related to the literary works of their time than to any of these other things; yet I could not find any such work which told the same story as the tarot cards. At last I found two tapestries in the Metropolitan Museum of Art in New York, depicting the Triumph of Fame and the Triumph of Time, as Petrarch had described them in his poem I Trionfi. Here I had the lead at last.

Here are the two large images from the Met, which I uploaded to Wikimedia Commons.

mjhurst wrote: Here are the two large images from the Met, which I uploaded to Wikimedia Commons.


Thanks for your contribution. I see ...

Renomee = Fame with wings at the bottom, many faces (= feathers) in her clothes, which show their tongues, broken trumpets
(I don't get, what Fame has in her hands)

Two larger birds before the chariot

Two inscriptions at the heaven, two difficult to decipher

Sun to the left, moon to the right

Two men at the left, one called Noe = Noah

Nestor - with one hand in his purse, accompanies the chariot with a tree-stick in his other hand.

Father Time, sitting relaxed, with hat (? somehow a half sun hidden behind his head on the right side?), holds high a mechanical clock with the right hand, holds below a stick with the left hand. Above his head a zodiac cycle, in the cenzter of the zodiac cycle a part of a mountain with a tree and small birds. The chair is strange, somehow only half - or Father Time is sitting with the back in the driving direction. There's an inscription at the body, which I can't decipher.

In the background mountains and buildings of a city, at the top of a higher mountain a building with a tower (?), the whole possibly meant as a castle.

Well, it's indeed an interesting picture, but whey are they "the most significant examples in the world of Tarot"?
Huck
http://trionfi.com

Well, it's indeed an interesting picture, but whey are they "the most significant examples in the world of Tarot"?

Nah! Makes a great Christmas card though! Oh! the time of Christmas......

The strange thing about Right and Wrong is that there is also Right and Left.
~Lorredan
The Universe is full of magical things patiently waiting for our wits to grow sharper.
Eden Phillpotts


This tapestry is unusual Huck! The Zodiac runs backwards, yet Gemini and Cancer are swapped, as are Leo and Virgo
The banner says Time has pulled up due to the noise of the crash.
The four constables of Time on the road will cry, but Fame at the bottom/underneath will cry more.
Nestor appears to be getting feed from his purse to entice the deer to move on.
Time is waving his clock at the deer as if to show nothing should interupt Time- but there is no sign of decay anywhere- not even Methuselah looks old. Why has time stopped?
~Lorredan
The Universe is full of magical things patiently waiting for our wits to grow sharper.
Eden Phillpotts

Jean_Dodal_Tarot_trump_09.jpg Viewed 14842 times 20.26 KiB
The mind needs to be enlightened by light from outside itself, so that it can participate in truth, because it is not itself the nature of truth. You will light my lamp, Lord (IV.xv.25). Saint Augustine

I ask myself when looking at this card- how did the Late medieval Christian mind know what to regard as 'Truth' and how was that "Truth" arrived at?
~Lorredan
The Universe is full of magical things patiently waiting for our wits to grow sharper.
Eden Phillpotts