3 by Robert
The Choice of Hercules

A vigorous and plastic Hercules is depicted with two women flanking him, who represent the opposite destinies which the life could reserve him: on the left the Virtue is calling him to the hardest path leading to glory through hardship, while the second, the Pleasure, the easier path, is enticing him to the vice. 4 by Pen
These are all simply wonderful - I was having such trouble trying to find appropriate Lovers...

Do you know which is the right way round for painting 3/5?

Well, unless I'm really losing it, which is entirely possible, #3 and #5 are the same painting flipped horizontally....

7 by Robert
Judgement of Paris 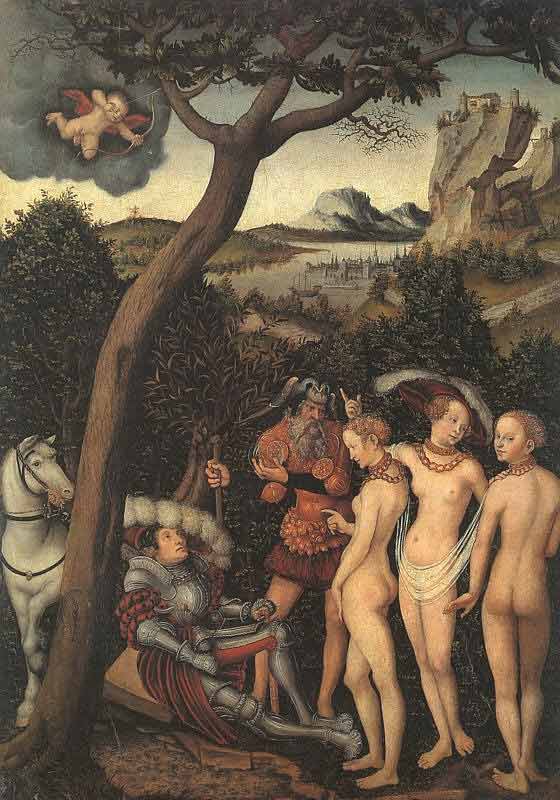 Zeus held a banquet in celebration of the marriage of Peleus and Thetis (parents of Achilles). However, Eris, goddess of discord, was uninvited. Angered by this snub, Eris arrived at the celebration, where she threw a golden apple (the Apple of Discord) into the proceedings, upon which was the inscription καλλίστῃ ("for the fairest one").

Three goddesses claimed the apple: Hera, Athena and Aphrodite. They asked Zeus to judge which of them was fairest, and eventually Zeus, reluctant to favour any claim himself, declared that Paris, a Phrygian mortal, would judge their cases..

Thus it happened that, with Hermes as their guide, all three of the candidates appeared to Paris on Mount Ida, in the climactic moment that is the crux of the tale. After bathing in the spring of Ida, each attempted with her powers to bribe Paris; Hera offered to make him king of Europe and Asia, Athena offered wisdom and skill in war, and Aphrodite, who had the Charites and the Horai to enhance her charms with flowers and song..., offered the love of the world's most beautiful woman...

The famous myth of the Judgement of Paris always comes to mind when I see the Tarot de Marseille lovers. It often has Cupid above, and Paris making a choice between Hera, Aphrodite, and Athena. It's easy for me to imagine Aphrodite as representing Pleasure and Passion, and Athena as Virtue and Courage, but there isn't a third choice depicted on tarot cards to be Hera, so it's not a good match. Nevertheless, it is worth considering as an influence. 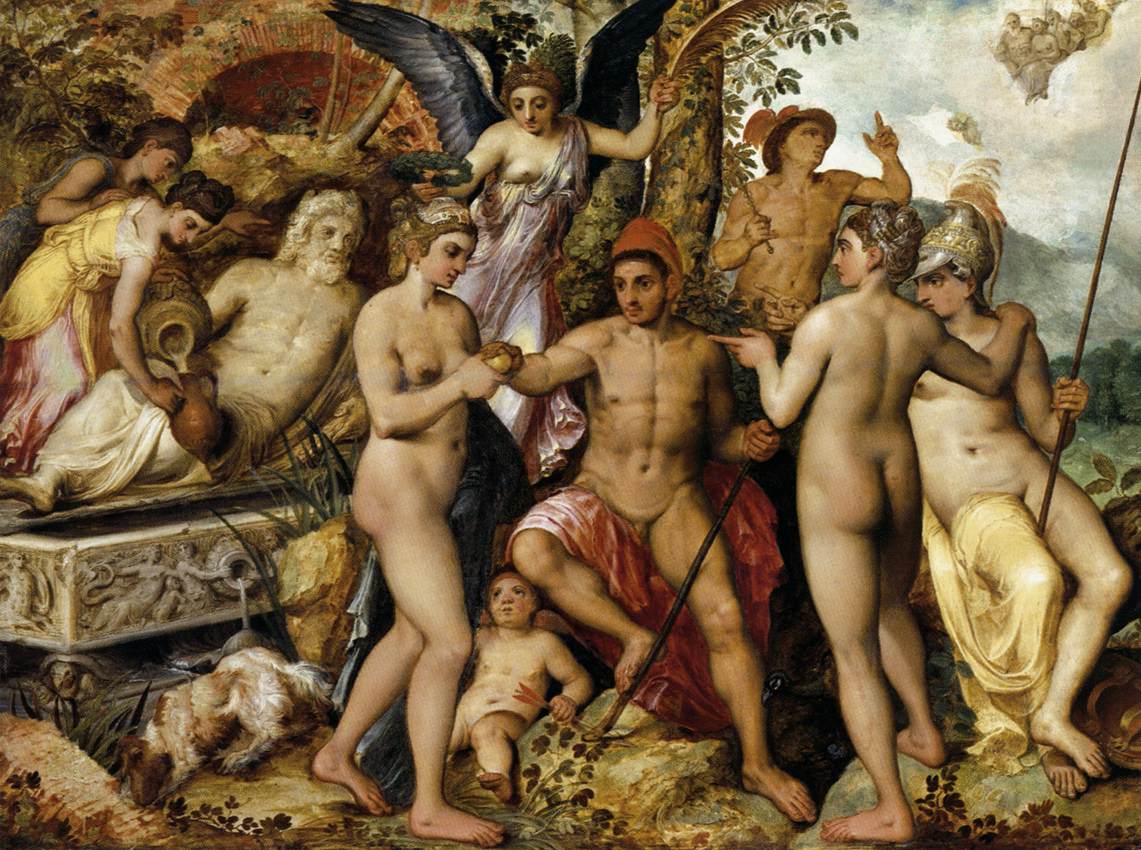 Well, unless I'm really losing it, which is entirely possible, #3 and #5 are the same painting flipped horizontally....

AH! You're right!!! Silly me. I even misunderstood which image you meant. Well then. Hmmm. Do I clean this up ore leave it as an embarrassment to myself?

I'm not sure which way is right.

9 by Pen
Partly my fault, Robert, since I counted from Steve's picture at the top, rather than from the first one on your post.

The second you posted is better for colour and clarity, but if you delete one the following posts won't make sense.

I'm so glad this thread now has some content.

10 by mikeh
I just read this thread,. Great images. But in the paintings Pen posted of Virtue and Pleasure, there is a problem when when applied to the tarot card. Let me start with the paintings. Virtue has a laurel wreath and Pleasure a wreath of flowers. In the paintings, we do not always see both--for example in the Carracci I can find only the laurel, just sticking out from Virtue's head; but both are clear in the Veronese. Here are the two I have been talking about. In other paintings, there is the flower-wreath on Pleasure, but not the laurel on Virtue. 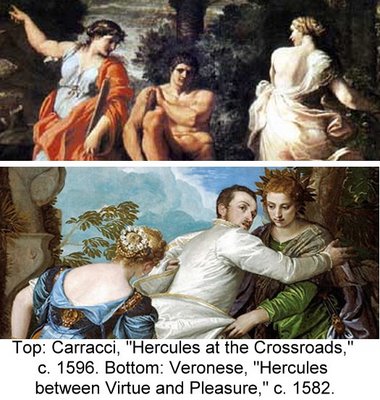 The problem is that in the Marseille-style tarot (see below right), the lady on the left has the laurel wreath, and the one on the right has the flowers. So the left ought to be Virtue and the right Pleasure. But the 19th century occultists (e.g. Paul Christian, 1862) said the opposite, as do many people today; they must not know that the card was already part of a long-established iconographic tradition. Yet on the card (below right), the one with the flowers seems obviously the one he should marry, not the one old enough to be his mother (or father--the gender is not so clear). It is a puzzle for us to solve. 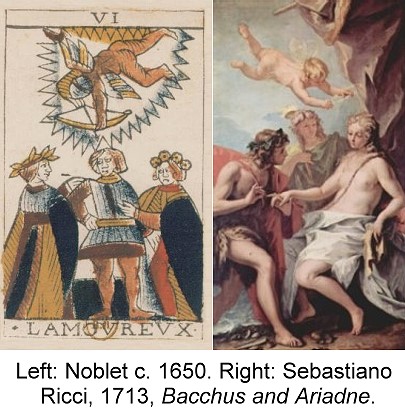 I'm glad you like the images. I can find them with cupid beside Vice/Pleasure... but not floating above as seen in Tarot de Marseille.

Above, I've posted a painting with Cupid on top and a man with two women below, the man obviously choosing the woman on the right. I can't make out wreaths on any but the man. But it's not a "Hercules"; it's a "Bacchus and Ariadne." I strongly suspect that its composition was influenced by the tarot card, and not the other way around, as I know of no precedents in mythological art. It may reflect a common way of seeing the card. The left-hand lady in the painting is a Bacchante. If so, she would normally be wearing a wreath of leaves (in this case it could be ivy), except that here the artist wanted to be original. I am not sure if she is a witness to a betrothal, or a priestess officiating a marriage. If the latter, painting and card are related to those cards that had a priest instead of Cupid, and also to the Schoen horoscope, which used that image for its sixth House, the House of Marriage (below, with the Vieville). So in the Marseille card, the woman on the left would be that same priestess, perhaps related to the Popess. 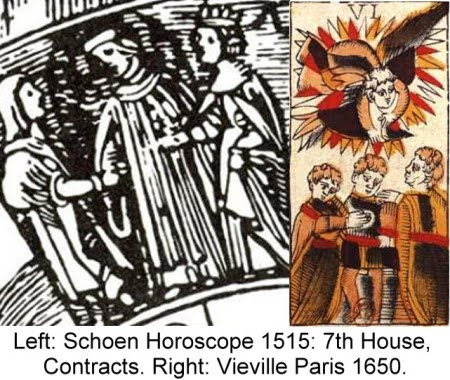 How does that relate to the theme of Virtue and Pleasure? Well, some people in the Renaissance didn't think the choices were mutually exclusive. Here is Duerer's "Hercules at the Crossroads": 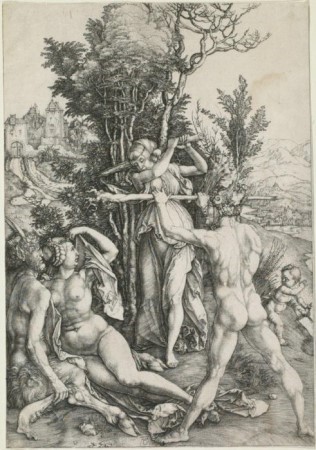 Hercules is trying to get Virtue to leave poor Pleasure alone. Many more people have been killed in the name of Virtue than of Pleasure, I can hear him saying. Pleasure is just minding her own business. The two should get along. 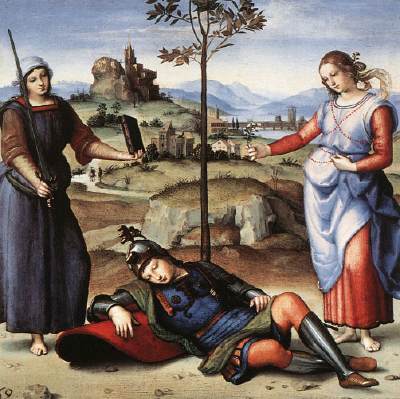 On this theme, Edgar Wind (Pagan Mysteries of the Renaissance 1958) has a chapter called "Virtue Reconciled with Pleasure." He describes Raphael's painting "The Dream of Scipio" (above). The sterner of two women offers Scipio the book of Wisdom and the sword of Courage, to put the allegory in terms of Plato's Republic. The other woman offers the flowers of sensual delight, the physical appetites. The pagan Neoplatonist Macrobius had commented in his essay on Scipio's dream that it means that the hero should reject pleasure and pursue the active and contemplative virtues. But Ficino's understanding was different: Wind cites Ficino complimenting his patron Lorenzo on his adoration of all three goddesses (Wisdom/Athena, Fortitude/Hera, and Pleasure/Venus?) in accord with their merits (p. 82). Scipio can choose both sides of the painting.

In England, Wind relates, there were at least three theatrical works portraying Queen Elizabeth as combining the Wisdom of Minerva, the power of Juno, and the grace of Venus. Later, in 1618, the playwright Ben Jonson put on a masque for James I called "The Reconciliation of Virtue and Pleasure." Published in 1640, it made the point that even so-called lower pleasures such as dancing--which the English Puritans opposed--are not necessarily opposed to virtue: some dances even promote virtue--e.g. the ones in Jonson's masque (Leah S. Marcus, The Politics of Mirth, p. 113f-119, Google Books). "What is noble should be sweet," Jonson said (Wind p. 85). Yet the two poles are not equal: "Pleasure the servant, Virtue looking on," he concludes (http://www.worldofquotes.com/topic/pleasure/index.html). Virtue must be in command.

Less sensuously, there was Montaigne. In 1580 he wrote, "Even in virtue our ultimate aim---no matter what they say--is pleasure." Virtue is high pleasure, if practiced rightly. But Montaigne objects to those who say that the possession of virtue is delight:

Those who proceed to teach us that the questing after virtue is rugged and wearisome whereas to possess her is delight can only mean that she always lacks delight. (For what human means have ever brought anyone to the joy of possessing her.) Even the most perfect of men have been satisfied with aspiring to her--not possessing her but drawing near to her. ([/i]Essays[/i], a Selection, p. 18f, in Google Books)

Only the vain and proud--like the Puritans satirized in Shakespeare's plays, and their continental equivalents--delude themselves into thinking they possess Virtue. It is the path toward virtue that is a delight, Montaigne insists, and thus not the wearisome climb that such thinkers portray it. 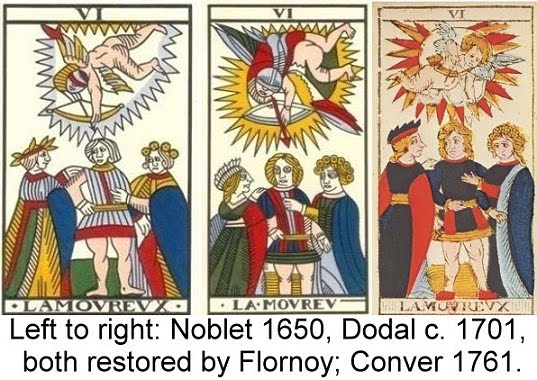 So here is what I see on the card. The young woman on the right and the young man want to get married. But he wants to follow the course of Virtue rather than Pleasure. Hence the frown on Noblet's young woman's face. Pleasure protests, telling Virtue, "Our love is from the heart, not mere pleasure." Thus in the Dodal and Conver, the girl has her hand on his heart. Then Virtue, like a kindly Great Mother goddess, gives them her blessing, even permitting them to get pleasure from each other (i.e. her gesture toward the phallus, which the occultists apparently found so vicious). Devoting himself to Virtue's dictates, the young man discovers that he is granted Pleasure. Whose hand, in the Dodal and Conver, gestures in the direction of the girl's genitals? It doesn't matter.

It is also as though, as Daimonax says, the older woman turns into the younger by her touching of the god's ritual phallus. Just so, in The Magic Flute, the hag given to Papageno turns into Papagena. In the Arthurian tale of Gawain and Ragnelle (http://en.wikipedia.org/wiki/The_Weddin ... e_Ragnelle), when Gawain marries, in the most honorable fashion, the "loathly lady," on their wedding night she turns into the beautiful princess. Or in the fairy tales, when the princess kisses the frog, he turns into the prince.

Virtue becomes the highest Pleasure. And Pleasure, even sensual pleasure, is virtuous within the bounds of heartfelt marriage (thus uniting Athena, Hera, and Venus). And Virtue, the Bacchante in Ricci's painting, is the officiating priestess of the heiros gamos of Dionysus and Ariadne.