2 by SteveM
"not only are God, the angels, planets, and the cardinal virtues disparagingly placed and named, but the true lights of the world, that is the Pope and Emperor"

Medieval theory of the 'two lights' of temporal and spiritual authority associates the Pope with the Sun:

The Golden Ladder of Habsburg Ancestors

In the Tarot de Marseille pattern in a 3x7 grid pattern of the numbered trumps V the Pope in the bottom row is parallel the Sun in the top.
Immature poets imitate; mature poets steal; bad poets deface what they take, and good poets make it into something better, or at least something different.
T. S. Eliot

Any info, who made the picture?
Huck
http://trionfi.com
SteveM
SteveM

"The second ladder, golden, leads to a sunlit sky (fi g. 18). Here seven successive Habsburg ancestors ascend in rank from hermit and monk up through bishops and cardinals to a figure who is being offered the papal tiara by angels. These figures are described as those “who left worldly rank and became spirituals, thus becoming hermit, monk, abbot, bishop, archbishop, cardinal, and pope.”

"...Together these paired ladders convey the medieval theory of authority, the “two lights theory,” where the greater spiritual power of the papacy outshines the temporal power of the emperor, as gold outshines silver or the sun the moon."

"MARKETING MAXIMILIAN The Visual Ideology of a Holy Roman Emperor" by LARRY SILVER, p.47/48
Immature poets imitate; mature poets steal; bad poets deface what they take, and good poets make it into something better, or at least something different.
T. S. Eliot

5 by Robert
These are great Steve, thank you!
SteveM
SteveM

6 by SteveM
While, like a Janus, the faces of the the two lights are averted, with one looking beneath him and the other above, both look upon a lover and two loves.

See now the top rung
lights of the world,
both called holy:

here top the Ladder of the Moon,
Holy Roman Emperor;

there top the Ladder of the Sun,
Holy Father, Bishop of Rome.

Two lights with brides
in triumphal train,
a juggler and a madman
or, with irony perchance,
a holy fool and true:

the other two outshone.

Holy Emperor,
light of the Moon,
reflects upon the waxing
waning world of change
beneath him.

Enthroned,cross legged,
heel against his shield
with its black emblazoned eagle;
sceptre held straight as a rule
to survey.

Gazing on two
brides, one people:
his Empire, a Christendom,
and this lover of
vain trifles.

The Holy Father, light of the Sun,
his hand upraised in blessing,
revealing the wounds of Christ
made nought in gold on white
embroidered velvet gloves,
turns his gaze on that above:

sees there a lover with two loves
both human and divine;
and thence the triumphal groom
in whom, through perfect love,
the perfect flowers of virtue bloom
a lover worthy of his beloved

and true citizen of God's own City,
the holy bride, Jerusalem.
Still here the Pope remains enthroned
with acolytes and whore, his Rome,
yet knows that citizens of God be known
by the nature of their love, not robes.
Immature poets imitate; mature poets steal; bad poets deface what they take, and good poets make it into something better, or at least something different.
T. S. Eliot
SteveM
SteveM

Beneath the Cross of Salem
kneel Romulus and Remus,
tonsured and converted
before the Bishop of Rome:
their City, his Bride.

Twins mortal and immortal
human and divine
made one: holy brothers,
conquered and united,
in the body of Christ.
Immature poets imitate; mature poets steal; bad poets deface what they take, and good poets make it into something better, or at least something different.
T. S. Eliot
mikeh
mikeh

9 by mikeh
Romulus and Remus is good: the twins whom we see in the Sun card, next to the wall of the citadel at Rome, where Remus was killed. Or perhaps you don't want to go that far. I'll post something about that on the "Sun" thread eventually. But for now the Pope card.

What I find interesting is the change that occurs between Noblet and Conver, in the lower half of the card.

Noblet has two acolytes, one with hands outstretched and the other with hands in prayer. When I make those gestures, it feels like the first is receptive, receiving from above, the second sending, to the above in prayer. Very nice. Only one acolyte has a hat, for some reason; perhaps the one with a hat is someone already a member of the hierarchy, a sponsor perhaps, even someone with the rank of cardinal, since it is red (the color has faded over time). There is a white diagonal line between the two acolytes, perhaps merely a defect in the plate.

The "Chosson," as it is called, 1672 or whenever (2nd from left above), introduces an arm from the side. The Pope appears to be looking in the direction of that person, whoever it is. The acolyte's hat is now yellow. And the hand gestures are different. All we see is the left-hand acolyte's hand upraised, perhaps palm toward the Pope, and a hand below, perhaps that of the same acolyte, perhaps palm toward us. It reminds me of Nazi salutes I see in World War II movies. The white line of the Noblet has turned intoo an odd crescent-shaped image between the two acolytes.

In Dodal, c. 1701, the style (so-called "Marseille I") is mostly like that of Noblet, but has the arm of the "Chosson" and his yellow hat on the acolyte. The crescent has shrunk to a nondescript line. Perhaps Dodal did not approve of that crescent and wanted to return to something like Noblet's diagonal line.

In Conver, 1760 and 1761 (1761 shown), we return to the style of the "Chosson" ("Marseille II"); the crescent has turned into a dagger, or so it seemed to Daimonax (bacchos.org), following the suggestion of Camoin and Jodorowky in their version of the Marseille. In reference to the Conver I agree. The "Nazi salute" is still there.

So what happened? It seems to me that the "Nazi salute" is the taking of an oath, a pledge of secrecy and obedience. The pledge of secrecy was key to all the "mysteries," as they were seen in the 18th century. That is what the finger to the lips meant in the Egyptian hieroglyphs and the image of Harpocrates as shown in the emblem books (it was actually the hieroglyph for "child," but that is beside the point). And the dagger is the indicator of what will happen to those who break their oath--the usual punishment threatened in the "secret societies," or so it was said. In Mozart's Magic Flute, for example, this punishment is intimated by the initiation-master (see for example the synopsis to Act II at http://www.freemasonry.bcy.ca/biography ... flute.html) for breaking the oath. A different priest conducts the characters through their "trials" than the high priest who admitted them, Sorastro. Thus the hand on the card belongs to the one who will accompany those to be initiated into the "mysteries."

I do not know at all that the one-hand-up-one-hand-down gesture is in fact a sign of the taking of an oath. It just seems like that; it is what goes with the blade. My only iconographic reference is the two torch-bearers in the Mithraic mysteries, pictured in Cartari 1647, one holding his torch up and the other down. The high priest of Mithras was called "papa"; and there were in the Mithraic ruins of Italy images of an imposing figure with the head of a lion holding one or more keys, similar to those in the coats of arms of the Popes and also appearing in some versions of the card, such as the Geoffrey 1557 (left second below) and the Anonymous Parisian c. 1650. 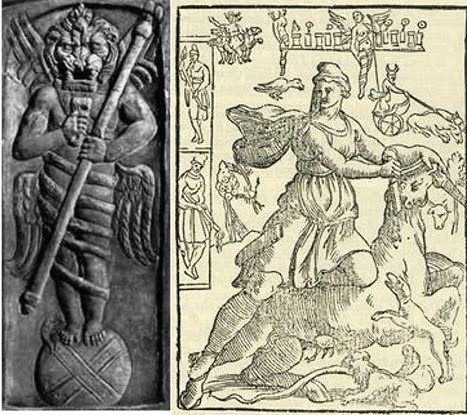 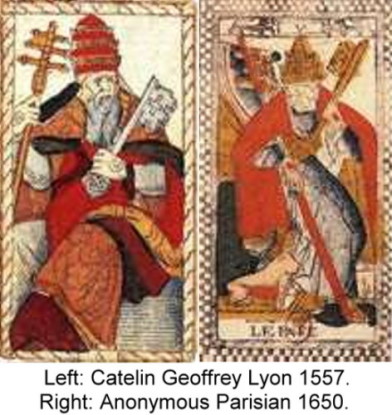 The Mithraic image on the left (first above) apparently existed as an amulet in the Middle Ages. In 1489, the Florentine philosopher Ficino described a leonine image "in gold, using his feet to roll a stone in the shape of the sun." In the figurine above, the figure stands on a ball. Ficino recommended the image a cure for kidney disease, "approved by Pietro d'Abano and confirmed by experience" (Brian Copenhaver, "How to do magic, and why?" in The Cambridge Companion to Renaissance Philosophy, p. 153f). According to Wikipedia, Pietro d'Abano was professor of medicine at Padua and died around 1316, after being imprisoned for practicing magic, making a pact with the devil, and similar crimes.

It seems to me that it would have been a smart move on the part of the early Church, eager to win over the Imperial Roman army, to adopt terms and symbols from the army's most popular mystery cult (another example, of course, is the fixing of the new cult-god's birthday to correspond to that of the old).

My main reason for introducing this subject is to discuss the dagger, a puzzling detail that can also, for some, be dismissed as a mere fold in the fabric. Yet its shape is similar to the curved blade seen on the Dionysian sarcophagi that fascinated the Renaissance and those after, the one that would kill the goat when the procession and other rituals were done, the goat of atonement, which Daimonax says, and I agree, is prefigured in the animal reaching up for the Fool's genitals (as I outlined at viewtopic.php?f=23&t=383&start=20#p6495). 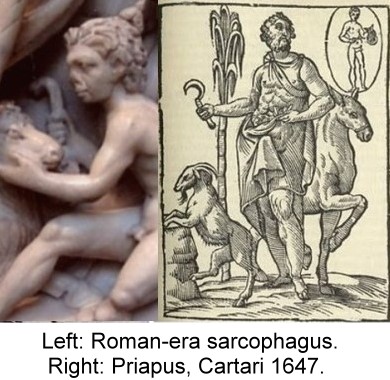 mikeh wrote:Romulus and Remus is good: the twins whom we see in the Sun card, next to the wall of the citadel at Rome, where Remus was killed. Or perhaps you don't want to go that far. I'll post something about that on the "Sun" thread eventually.