It is a document very, very, interesting to understand the meaning of the Magician.
When a man has a theory // Can’t keep his mind on nothing else (By Ross)

93 by debra
Is it here we were talking about Magician and Dentist?
Because there's something on e-bay now about this:
http://cgi.ebay.co.uk/ws/eBayISAPI.dll? ... EL:GB:1123


French wooden box dating from around 1860 with a wonderful image on the lid showing street perfomers. We can see an acrobat on a ladder, on the magician table the cups and ball can be seen and at the back an advert for tooth pulling.
In good condition with some scratches, 27 cm x 11 cm x 2.5 cm or 10 1/2" x 4 1/4" x 1".

94 by Pen
All three items date from between 1830 and 1890 - by then our dentist magician had been at his trade a long time. Surprising to find such recent evidence, and rather good too.


I think a doctor or surgeon are like Magicians, if we just think about what's it like for doctors to treat sick patients, its not just only about putting the knife into the flesh, and pulling out teeths, instead its a more complex procedure that as doctors, it is required to know and understand about the patient physically and mentally. This may not always be obvious in current society's medicine and hospitals treats its patients, but its something that a doctor must have.
Therefore, like art it covers a wide range of skills other than just treatment.
I can't tell what the characters are thinking by the paintings, but I am curious at what they might be thinking from the patient being operated on, the doctor or surgeon that's doing the treatment, and the strangers who watched in great curiousity.
So for the doctor, there is a clear connection to Magician, and that is to see that the art of medicine is a kind of complex art that involves knowledge of anatomy, knowledge of medicine/herbs/resources, knowledge of psychology in a way, knowledge on how to use the tools, and perhaps their own position within the social community their involved in, or what role do they play. So this is just my reflection of what I get from looking at these fabulous pictures.

I know I'm not a scholarly person, but these are all fascinating and beautiful paintings. Especially these, maybe its just me, but I do see some connection between the Magician and the minor arcana Reversed 10 of Swords. I'm referring to this connection with the picture of the surgeon and doctors operating on the patient. The patient's agonizing look as the doctor inserts his blade into their flesh kind of refers to the meaning of the 10 Swords because you have pain but not necessarily death (as portrayed by the 10 Swords), but you have the swords stabbed into a dead man's body which of course shows alot of pain is being portrayed. However, for the doctor as being described as a Magician, attempts to remove any pains or problems that brings pain to the patient itself (Reversed 10 of Swords, as if the Swords would fall out) and this could mean the attempt to pull out or withdraw the 10 Swords that's painfully left in the dead man's body.
Perhaps this could be viewed as a transition or change that's about to happen to the patient, similarly to the Reversed 10 of Swords where the swords would come out, and therefore causing the pain to cease and the dead man to be revived. Like the patient, if successfully cured, he will be revived and pain would be gone.

However thats IF the doctor is good or not...like the Magician can wield the sole called 'good' powers but at the same time 'black' magic. I would say 'black magic' would be a metaphor that describes the witch doctors who does not have the real knowledge in treating the sick and make the patients be cured, instead by relying on superstitions and what they call their own treatment as taking out the pain caused by demons,not only did they not heal the patient, but also made it worse.

http://en.wikipedia.org/wiki/The_Physician
When a man has a theory // Can’t keep his mind on nothing else (By Ross)

I checked out the book you recommended and I'm really interested and hoping to buy it here in Bangkok Thailand. Unfortunately I am sort of frustrated by the fact that we don't get that much 'good' books from the States or European countries. We have some shops that sell English books and books from other countries, however the selections are very limited.
Therefore, for Noah Gordon's book "The Physician," I may have to try and order from online.

Just a little thought here, I think that the Magician could be anything just like how you differentiate them. There are all kinds of doctors who play in specific roles in society, but I think if we're to look into their ways and how they do their duties and the workings of their knowledge, it is basically knowing the mastery of working with everything they have and to have something coming from that, curing illness, bring joy to the audience, etc. It doesn't necessarily have to be doctors, it could be entertainers, artists-painters, craftsman, etc...we could differentiate all the different roles and look into their specific duties in certain communities, or where they came from. This just proves how we look at the cards, and being able to come up with all the things that match what it could mean...

the fool wrote: I checked out the book you recommended and I'm really interested and hoping to buy it here in Bangkok Thailand. Unfortunately I am sort of frustrated by the fact that we don't get that much 'good' books from the States or European countries. We have some shops that sell English books and books from other countries, however the selections are very limited.

http://books.google.com ... offers a lot of texts online (just for the case, that you didn't realize it).

step by step
lower and lower
take them down
and at the bottom
make a nought of them
Immature poets imitate; mature poets steal; bad poets deface what they take, and good poets make it into something better, or at least something different.
T. S. Eliot
mikeh
mikeh

100 by mikeh
I saw something recently that is reminiscent of our discussion of how the table is drawn, in particular the Cary-Sheet, maybe the PMB, especially the de Geblin drawing, and indeterminately the "Marseille" are drawn in "inverse perspective," as SteveM pointed out, starting at viewtopic.php?f=23&t=384&start=70#p6878, then viewtopic.php?f=23&t=384&start=80#p6898, with the PMB just above it. Unlike what we are used to, the "vanishing point" is in front of the picture frame instead of behind. 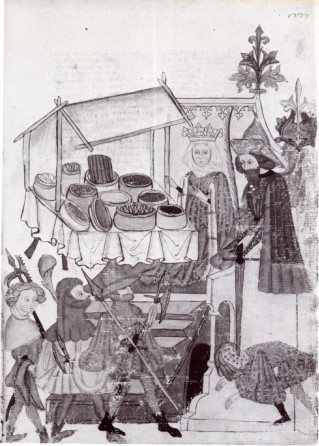 What is of interest here on this "Magician" thread is the way the table is drawn. It is very similar to the way the Cary Sheet is drawn. 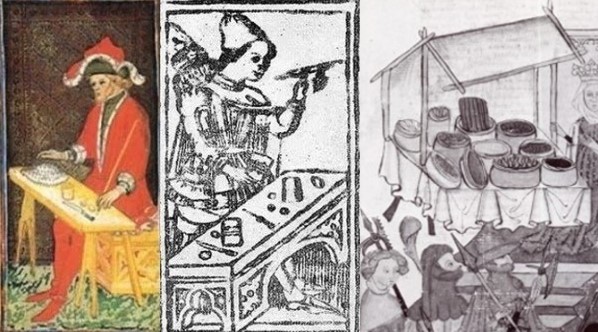 So perhaps the artist of the Milanese-style cards was referring back to, or thinking in terms of, or using as a model, the illustration in Palat. 1066. At that time, c. 1420, the method of perspective that we are used to today was very new, in Italy first seen in c. 1413 Florence (although it had been used in the Netherlands before that).

Another thing I ask myself is, what is that table doing there anyway, in Palat. 1066? It's not there at all in other contemporary representations of Mercury and Argus, e.g. the Libellus, c. 1420 (from which both the "Mantegna" and Lazzarelli's poem drew; my source for the drawing is Hans Liebeschutz's book Fulgentius Metaforalis: Ein Beitrag..., 1926, which includes both the 1066 and the Libellus, which is Vat. cod. Reg. 1290): 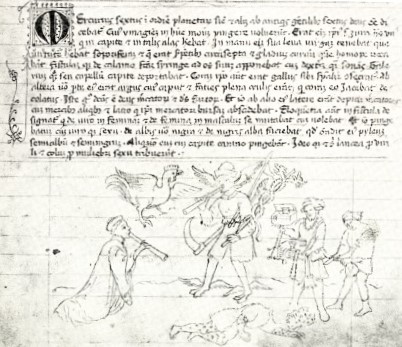 It's also not in the "echecs" (http://classes.bnf.fr/echecs/feuille/amour/index.htm):

I think the 1066 artist has borrowed the table from the Libellus drawing (or another like it) of Aesclepius (but not in this case that artist's sense of perspective, or lack of it): 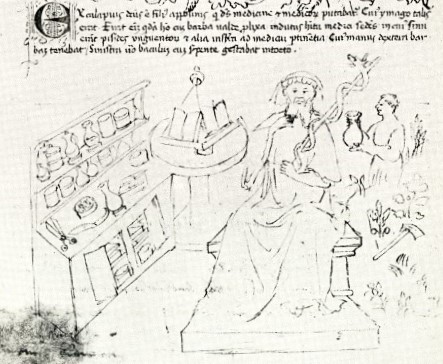 In other words, the 1066 artist wants Mercury to be in the category of healer or apothecary, as indeed Magicians were, as we learened in this thread in the discussion of Bosch's "Stone Operation." The 1066 illumination, from which the PMB, Cary Sheet, and probably "Marseille" (although we don't have enough of the table there) has him with his medicine. Or they might be the chemicals of an alchemist. De Rola, in Alchemy: the Secret Art,where I first saw the illumination, encourages an alchemical interpretation, although he doesn't say anything about the table specifically. He just says that Argus's eyes are what the alchemists saw as the raw material for a stage of the work they called "the peacock's tail," and that the weapons are the "secret fire." (I find it of interest that of all the scenes involving Mercury, the illustrators of the books on the gods should have chosen this one incident. I suspect the alchemical significance may have something to do with it.) But many alchemists were in practice physicians as well (e.g. Maier, Fludd); the main difference between an alchemical, Hermetic physician and an Aesclepian one--at least as the Libellus shows him--was that the alchemical one used chemicals as well as, or instead of, herbs. (Modern medicine, like so much else, is therefore a byproduct of alchemy.)

Anyway, these pictures might be part of the ancestry of the Bateleur; therefore it is worth seeing him from their perspective. They of course suggest a more positive evaluation of the Bateleur than is usually given on these pages. My view is that many if not all the cards have positive and negative interpretations. I have presented an even higher intepretation of the Bateleur on the "Tarot and alchemy" thread that I initiated recently. See viewtopic.php?f=11&t=647#p9689.

In the illustration I started off this post, I have not differentiated between the woman at the table and Mercury next to her, who seems to be in charge of the pots. She is actually the healer in this scene, while Mercury goes about the killing (at Jupiter's behest, as Argus was guarding a virgin he had his eye on). In the tarot card, the Bateleur takes her place, while both Mercury and Argus have dropped out of the tarot's version of the scene. She is actually a figure that appears often in the illustrations of Palat. 1066, eiher of one hooded lady or of similar depictions of different ladies. She deserves a post of her own. I have tried to do so at viewtopic.php?f=11&t=647&p=9870#p9870.