104 by debra
Apropos the items on the table, see this magician, at 5:43, and especially beginning 6:06.
http://www.youtube.com/watch?v=vr0e_WsjkvY

106 by Ross G. R. Caldwell
The Tübingen Hausbuch, with the Children of Luna picture that Huck posted at the top of this thread, is downloadable in PDF (in color!) at Tübingen University -
http://idb.ub.uni-tuebingen.de/diglit/Md2
(181 megs) 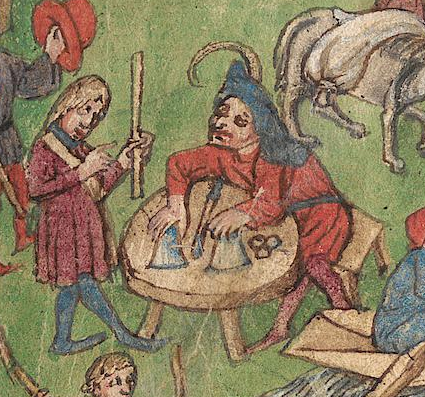 107 by Robert
Thanks for that Ross!

4. That Leonardo was interested in magic tricks tends to show the close relationship between the art of painting and the art of the conjurer, both creating illusions for the purpose of astonishing and delighting their audience. The article relates that Paciola taught Leonardo about perspective, one method by which the painter creates the illusion of real three dimensional space in his work. It is a comparison Plato also made in The Republic, to the detriment of both.
A-M
A-M

110 by A-M
All of a sudden I saw what the peculiar hat of the Visconti-Sforza Magician refers to: the caduceus, the staff of Hermes!

On my blog I elaborate on this subject and discuss the symbolism of more historical decks:
https://www.anne-marie.eu/en/tarot-1-the-magician/