1 by marco
The Catelin Geoffroy Tarot (Lyon, 1557) features a strange "tower" card.
I attach a photograph from Dummett's "Il Mondo e L'Angelo" (a similar image is in Kaplan I, p.132) as well as the clearer (but not 100% reliable) schematic reproduction by Brian Williams ("A Renaissance Tarot").

I think that this card is rather obviously a representation of Orpheus and Eurydice: it illustrates the most dramatic moment of the story, when Orpheus, after having rescued his lover from the underworld, looks back to Eurydice and loses her forever. Still I have not found this interpretation neither in the three authors above nor in Andrea Vitali's essay.
What is your opinion about the complex scene represented on this card?

PS (Nov 7, 2009): I found out that Geoffrey's XVI trump was interpreted as Orpheus and Eurydice by Giordano Berti (“Storia dei Tarocchi”, 2007). I read the book when it was published, so it is clear that I derived this interpretation of the card from Berti.
Attachments

2 by marco
A couple of visual references form the Web Gallery of Art:

* Orpheus with a viola instead of the lyre:
http://www.wga.hu/cgi-bin/highlight.cgi ... nd=orpheus

* In the background on the right it is represented the same scene we see in the card:
http://www.wga.hu/cgi-bin/highlight.cgi ... nd=orpheus

and to "Orpheus with Viola" 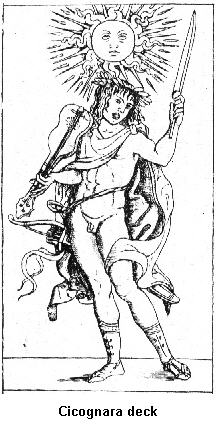 "Cicognara deck" means "6 reproduced cards" made from an older deck in the possession of Leopold Cicognara, published in book ca. 1830. 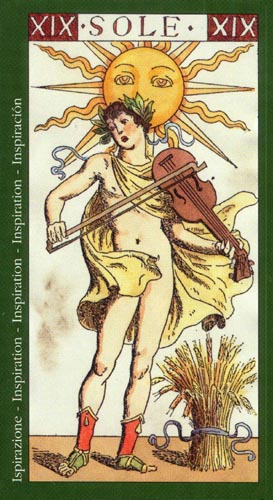 WWPCM03978
"Lo Scarabeo" (Italy)
deck "Tarot of the Master", 2002
Created and published in Turin in 1893 with the title "I Naibi di Giovanni Vacchetta"
Huck
http://trionfi.com

4 by marco
Hello Huck,
thank you for the excellent colour photograph of the card!

Thanks also for the Cicognara and Vacchetta sun cards: more evidence for the use of a viola instead of the lyre.
To be specific about the subject, I think those sun cards represent Apollo, as in this famous fresco by Raffaello and in the Mitelli Sun Card.

The iconography of Apollo and Orpheus is similar, so context seems to me the only way to say who is who

Possibly one more hint could be that nakedness is generally associated to Gods.

5 by marco
Michael J. Hurst has sent to me many great images of Orpheus and Eurydice.
I attach a slightly enlarged version of the one that can be found here:
http://www.iconos.it/index.php?id=3870
It is an illumination dated 1375: Lyon, Bibliothèque de la Ville, Ovide Moralisé, Ms. 742, fol. 166v.
It includes all the elements we see in the card. Below the image one can read the French description "Comment Euridice fu Rendue a Orpheus" (how Eurydice was returned to Orpheus).

Sure, the figure in the Cicognara deck is more Apoll as it is Orpheus.

Generally the picture Nr. XVI in Geofroy's Tarot doesn't really look as a tower ... it's an incomplete deck, can we really be sure, that it has the usual motifs? The picture is more a devil as a tower ... but we've no other example for XVI = Devil.
In the Leber Tarocchi the assumed "devil" might be very well Hades stealing Penelope, so also "capturing a woman"

In the Tarot de Paris the Tower is also very unusual: 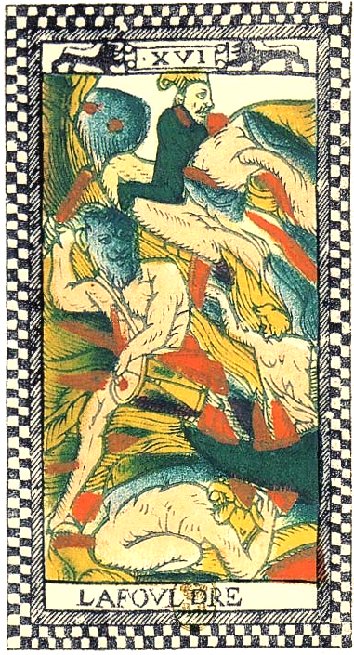 Here a strange (somehow similar to Geofroy's tower-devil) figure beats a drum and three other person-like figures are somehow confused as all the other things difficult to decipher. But the whole thing is called "lafouldre" from "foudre" = "lightning". Possibly something is burning, possibly there is a big-monster-face in the background of the figures with eye and a big tooth in red.

Mitelli has a single figure, met by a lightning. The Minchiate has Adam + Eve leaving paradise, following a picture in a Florentine church from early 15th century.
Huck
http://trionfi.com

Maybe it's difficult to see the monster face in the fouldre of Tarot de Paris. So I attempted GIMP to become better understandable.

The whole seems to be the head of a big fish with the nose of a pig. One sees only the front. The black man sits upon the nose. The men in the middle is in the mouth. The lower mean, which seems to have a sheepshead is below the mouth. The devil is happy with its drum and possibly presents the tongue of the monster (this not identifyable red might be the tongue).
The flames seems to come from the mouth of the Monster ...

... I hope, anybody can discover something similar.
Huck
http://trionfi.com

8 by marco
Recently I have been listening to Mozart's Requiem, and a few verses made me think of the images we have been discussing here:

Lord Jesus Christ, King of glory,
deliver the souls of all the faithful
departed from the pains of hell and from the bottomless pit.
Deliver them from the lion's mouth.
Neither let them fall into darkness
nor the black abyss swallow them up.
Attachments

9 by marco
I edited the first post in this thread to point out that the interpretation of Geoffrey's XVI trump as Orpheus and Eurydice was presented by Giordano Berti in his “Storia dei Tarocchi”, 2007.

10 by Pen
Truly amazing - I don't know how many times I've studied that card without seeing the monster. Yet he's definitely there. Thanks all for the fascinating thread.