It is the reproduction of a hand-painted deck presumably made by or for "Mage Edmond" in 1860s Paris. Although the majors have been viewable online for a while, I have been wanting to see this deck as a whole. It is well laid out, too. My only issue about that part would be his placement of the Fool, numbered 0, put first, before 1. Since the deck is composed rather precisely according to Paul Christian's 1863 book, L'Homme Rouge des Tuilleries, it actually belongs between 20, "Awakening of the Dead," and 21,"The Crown of the Magi", as in Christian's list on his p. 452. Putting it before 1 does make it easy to find, for someone who doesn't know the vagaries of French occultism, but it also gives what I think is a false impression.

It remains is a nice addition to the translations of the notes on the individual cards at
http://www.tarotgarden.com/library/deck ... tation.php

and the discussion of the presumed creator and the deck itself in Decker, Depaulis, and Dummett, Wicked Pack of Cards, pp. 202-203 (for which see below).

There are also THF discussions of the deck and its creation. One starts at viewtopic.php?f=11&t=730&p=10533&hilit=belline#p10530. This is the second post in the thread "Collection: Frame Stories". There follows an interesting interchange between Bertrand and Huck. The other is in a post by Mary Greer at viewtopic.php?f=16&t=126&p=2123&hilit=belline#p2123. It is short enough to include here:

Edmond Billaudot (c. 1865) attempted a synthesis of the Tarot de Marseille and the Egyptianized cards of Etteilla and Paul Christian. I don't think his work was published until 1966 (Grand Tarot Belline) but I believe he was a teacher and may have had an influence on others.

That said, there are what seem to me variousconfusions in this material. Although I am not sure what Mary intended to say, Paul Christian did not produce any cards, just descriptions of what he imagined as gold plates, in the context of a novel. Edmond's deck is consistent with these descriptions. The characteristic "Egyptianized" style did not come about until 1896, in a collaboration between Robert Falconnier, an actor, and Maurice Otto Wegener, an artist. I have not yet looked at the Huck-Bertrand interchange in any detail Here I want to talk about DDD and the two web-pages (Wintle and Pelletier/Goodman).

Here is the first paragraph of DDD's discussion.

The unclear part is regarding the "extra cards". There are two such cards, they say, one saying that Edmond used his cards with Emperor Napoleon III, the other reproducing an extract from a notebook still extant by Edmond of "philosophical thoughts".

As is clear from Wintle's very clear reproductions, these extra cards have two quite different looks. The first is typeset and surely an addition by the 1966 publisher, attempting to say something about the deck's original use. The second, the "manuscript", is handwritten and appears to be part of the assumed deck as created by Mage Edmund. DDD do not distinguish between the two types of "extra cards", other than saying that one is a "manuscript" (which here only means "hand-written"). What is most relevant is that the other is from the 1960s.

It is unfortunate that the publisher's card gives no evidence for what is claimed. It may well be true that Edmond read the cards for the Emperor. If so, it is important historical information, even momentous, in a rather negative way, as I will attempt to explain at the end of this post--tarot divination at its worst, which if a ruler uses in making political decisions is a recipe for irrational behavior, disaster, and great loss of life, setting the stage for even greater loss of life to come.

Regarding the second card, it is clear that the whole thing, except for a couple of lines at the end which I haven't found, is taken word for word from pp. 452-453 of Paul Christian's L'Homme Rouge des Tuilleries, published 1863. It may also be in a notebook of Edmond's, but if so, he copied it from Christian's book. Below is the card along with the passage in the book. I include at the top the end of Christian's list of the majors in order. His "Crocodile" is the Fool. 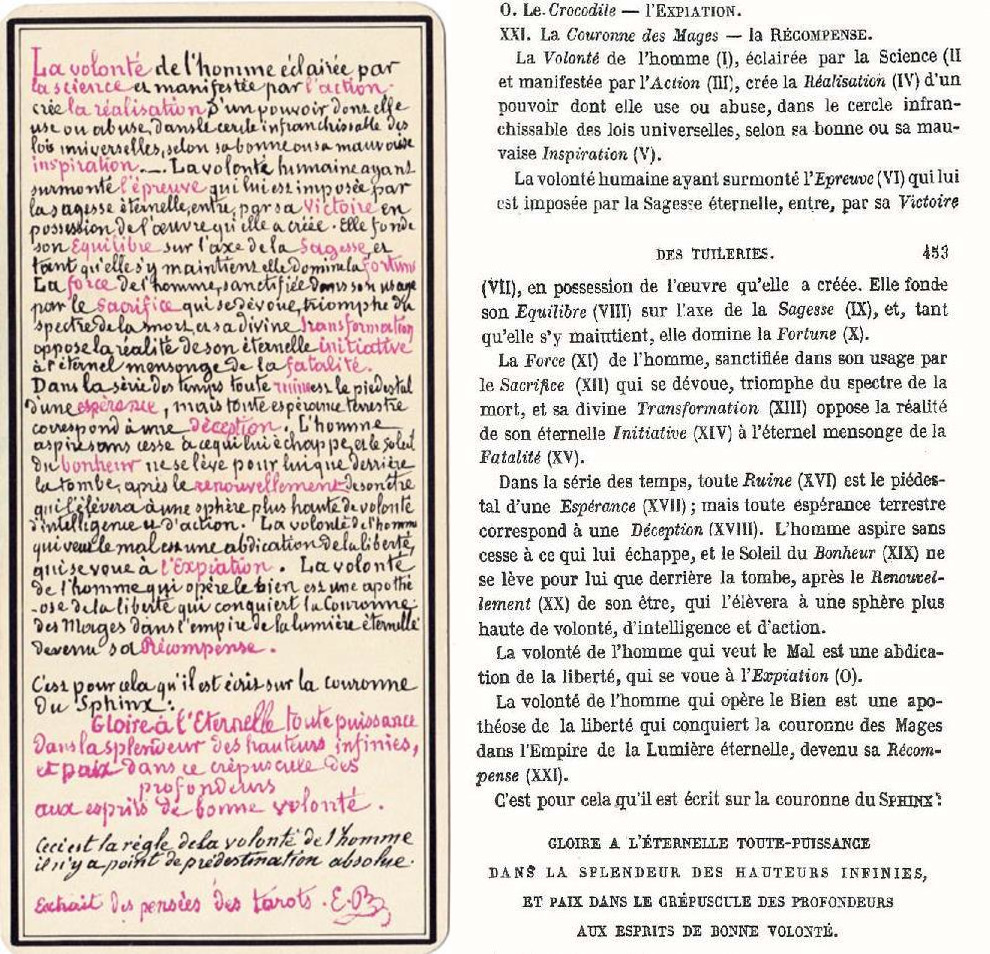 8. The notebook is included among possessions of Edmond, including the original cards, donated by Belline to the Musee des Arts et Traditions Populaires in Paris.

There remains the issue, raised by Bertrand, of whether these possessions as a group really are Belline's, as opposed to someone else's or a modern forgery. I would assume that such a multiple forgery, done without much gain (just the income from the published deck, and the credit to Belline), would be too elaborate for any sane person to undertake, given also the ignominy of exposure. But I do not know the minds of such people.

DDD's second paragraph on Edmund is on the Major Arcana. I find nothing to quarrel with in it. 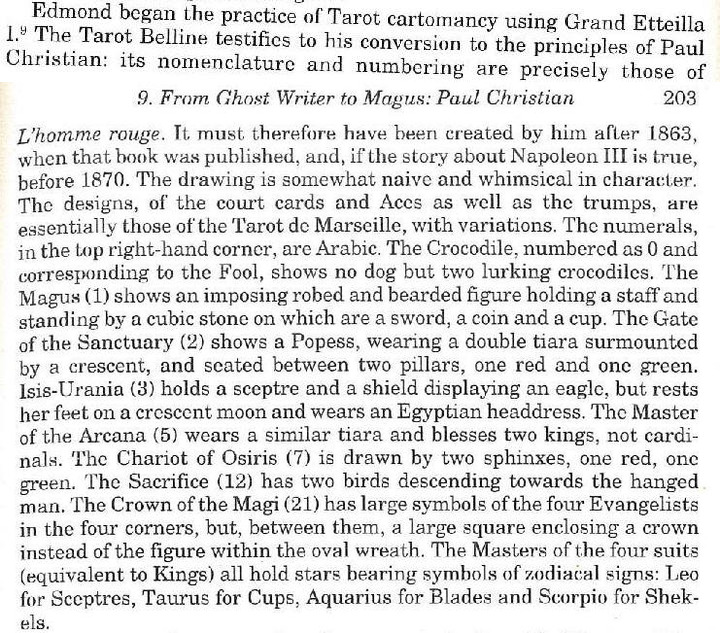 In this light, some of what Winkle says needs to be re-examined. Here is his introduction:

Le Grand Tarot Belline was produced after drawings by Edmond Billaudot (1829-1881) who was also known as Magus Edmond. It superficially resembles the Tarot de Marseille, but differs from it in time, design and symbolism, especially the numeral cards. The deck bequeaths ideas from a succession of well-known 18th & 19th century occultists and incorporates kabalistic, astrological and Egyptian influences, as well as the philosophical musings of Edmond Billaudot himself. A condensed cartomantic interpretation is hand-written on each card along with esoteric symbols and glyphs which facilitate the process of abstraction.

What is written on the cards is in fact taken word for word from Christian's L'Homme Rouge des Tuilleries . The scenes depicted are also per Christian's instructions in that book. The only "esoteric symbols and glyphs" that I can see on the cards are standard symbols for zodiacal signs and planets. These passages occur in the course of a long novel with no claim to anything but the author's invention. Or rather, in the course of the novel one character tells another that it is a translation from a papyrus scroll discovered in the middle of the 18th century in a Vatican attic but written in Hebrew by a certain rabbi in Alexandria. But all this is in the course of a novel. It is true that a few ideas come from de Gebelin, Levi, Sethos and the Crata Rapoa,-also, I think, Mozart's Magic Flute, and some of the astrology he uses for the astrological assignments is very old, pre-Renaissance, but what Edmond is using, besides keywords from Etteilla, seems mostly Christian's invention, quite consistent with the milieu of Second Empire France. I have written about the astrology and kabbalah in a post in the Researcher's Study part of THF; I suppose I canwrite more, on the rest. It is possible that there are "Egyptian influences" beyond the names "Isis", "Osiris", "Hermanubis" and "Typhon". since France was bringing numerous Egyptian treasures to Paris, but I think in fact there is very little. I can't argue that here. I will stop this particular rant and get back to Edmond.

What is written on the bottom of the cards, for the majors, is not everything Christian wrote, I wish to emphasize, but extracts. You can get an approximate idea of what is left out by comparing the translations by Goodman of what is on the cards with the accounts in the 1952 translation of L'Histoire de la Magie, pp. 95-111.

For the minors, Christian had much less to say, so Edmund copied the whole thing as it appeared in L'Homme Rouge. These divinatory meanings for the minors were not repeated in L'Histoire, hence remained untranslated until Goodman's, for which she deserves our thanks.

Here is DDD's final paragraph about Edmund, which I think contains a confusion at the end. The only part I take issue with is the last two sentences, on the trumps. 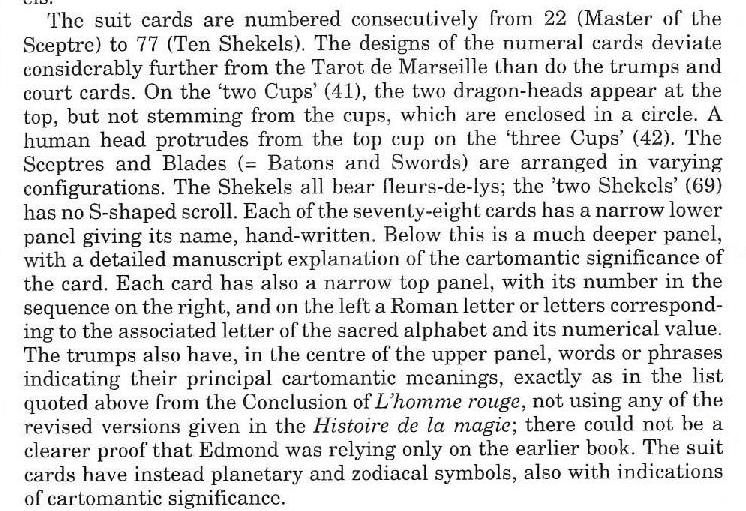 Winkle's reproductions straighten out the confusion. Christian's keyword for the cartomantic meaning is at the top of the card, and the title of the card is in the center, immediately below the figure; it is the reverse of what DDD say. The distinction between the two, title and meaning, is made clear in the list on p. 452 of the 1863 book, for example: "Le Mage symbolisait la VOLUNTE." Here "Mage" is the title and "VOLUNTE" what is symbolized. Edmond's titles are indeed as in the 1863 book as opposed to the later one. He has "The Reaper skeleton" as opposed to "The Scythe" of 1870 ;"The Two Urns" instead of "The Solar Angel" of 1870; and "The Decapitated Tower" instead of "The Lightning-Struck Tower" of 1870.

Pelletier's introduction to Goodman's translations, which refers explicitly to DDD, is fairly accurate. But in one place he uses an inappropriate word:

The bottom field of the card contains a proverb specific to the card.

It is not a "proverb". It is an excerpt from Christian's account of the divinatory meaning. Some are written in proverb form, but many are just straight-out predictions. I would not call, for example, "Prediction, circumstances favorable to success in your endeavours" (5 of Scepters) a proverb. Nor, for card 18, "Everything conspires to your destruction, and only you are unaware of it. "

That last one isn't bad, since he did go to his ruin, and he should indeed have been wary, as the card goes on to advice, of hostile people setting traps, i.e. Bismarck.

But let us suppose that, unsure about the wisdom of declaring war on Bismarck,, he didn't get that card and got the 5 of Scepters instead (circumstances were not at all favorable, as Bismarck's army was far superior, in numbers, skill, and technology). Or suppose he got card 7, the Chariot of Osiris:

If you approach the future with audacity, fortified with awareness of your right, you will break through your obstacles, crush your enemies, and your wishes will be realised.

So he declares war on Prussia and loses Alsace-Lorraine. Burning to avenge the wrong, France plunges into World War I and makes Germany pay and then some, thus setting the stage for World War II.

It might be argued that by "enemies" the card "meant" the war-mongers in France. Then it would be like the trap that the three witches set for Macbeth. Well, that's what made them evil witches, saying things that are literally not false but in practice egg people into doing foolish things.
SteveM
SteveM

2 by SteveM
Nive too see all of them - thanks for the heads up Mike!
Immature poets imitate; mature poets steal; bad poets deface what they take, and good poets make it into something better, or at least something different.
T. S. Eliot