21 by Ross Caldwell
I overlooked another set of painted cards with the interlaced spiral border style, the set in the Biblioteca Nazionale Universitaria di Torino that was damaged in a conflagration of January, 1904. Thierry Depaulis wrote the most recent account of them, "Tarots et autres cartes du XVe siècle exposés en 1880 à Turin", The Playing Card, volume 46, number 3 (2018), pp. 120-133. https://www.academia.edu/41106047/_Taro ... %A0_Turin_

It is not easy to discern the border style in the black and white picture shown in Kaplan, Encyclopedia 1, p. 119, but it is fairly clear in Detlef Hoffmann, The Playing Card, (Edition Leipzig, 1973), Plates, figure 18: Hoffmann took this image from a book published in Rome in 1961, Antiche carte italiane da tarocchi, which Thierry reproduces. 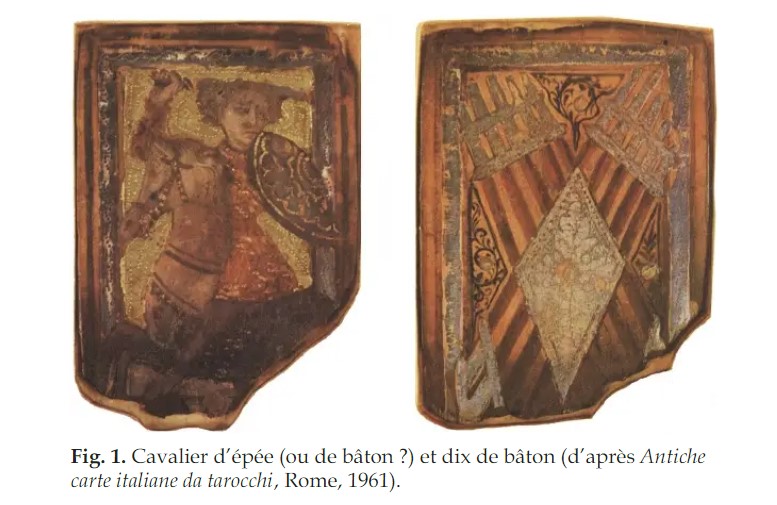 But the greatest clarity is shown in a series of black and white photographs taken for the exhibition in Turin in 1880, that is, before the fire. Thierry reproduces them on pages 124, 126, and 127. Here is the row with our Knight of Swords: 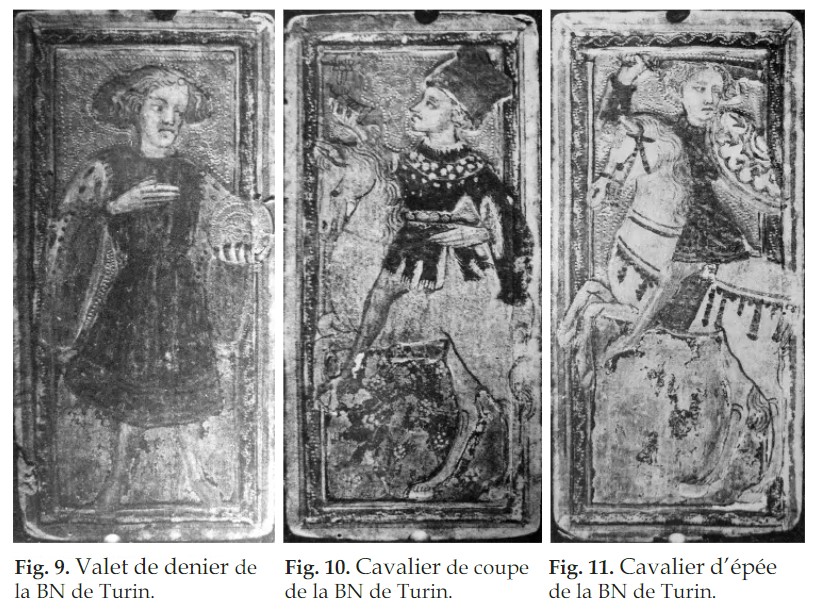 I'd like to offer that with this very specific type of border, the cards must be Florentine.

They were thus probably made in the same time period and in the same group of workshops in (or near, in Giovanni dal Ponte's case) the Borgo Santi Apostoli of Florence that the Rothschild, Charles VI, Catania, and Palermo cards were made. They were done by a completely different artist than these other cards, though, so it will be exciting to see if he can be identified, now that we have a provenance and timeframe.

I would further suppose that the generic design on the knight's shield, like that of Giovanni's bearing no heraldry, suggests that these cards were made for retail sale, rather than by commission.

Note also that there is no evidence, besides luxury, that these cards were Trionfi. No trump or queen survives. Because there are 10s, they were a pack of at least 52 cards.