Over 500 years of history in 78 cards
https://forum.tarothistory.com/

by EUGIM
* Too much been said regarding colours and its supposed meaning,but sincerely for me all are any meaningful.

- For example,takes the yellow colour.
All the cheap,clumsy and ready made esoteric way to gain the "holy" wisdom,claims that this colour depicts intelligence.
And if it is towards an intense green-yellow is better...

-But strongly contrary to this supposition,this colour along with black,is a depiction of pain and penance.
Umberto Eco in his wonderful book " Art and beauty in the medieval aesthetic " mentioned this.
Also that white,red and green are benevolent colours.

2-In the Renaissance art,contrary,the colours had an strongly tendency to be descriptive on a realist sense.

. For instance,for a medieval artist the blue symbolize the purest sacred divine wisdom of God.
Instead for the renaissance artist,this blue colour is more a depiction of the sky...
Giotto is a good example of the transition from one colour concept to other and Botticelli even he use colour on a symbolism way,he is closer to a realist depiction.
For him the sky is just blue.
Later at the summit of the belated Renaissance art this is more evident (Paolo Veronese and his masterly "Wedding of Cana " : http://upload.wikimedia.org/wikipedia/c ... se_008.jpg )
But earlier Piero della Francesca,a painter that I love too much,pushed to show a more realist colour depiction. ( http://en.wikipedia.org/wiki/Piero_della_Francesca )

-Going farthest the best example of all regarding the realist use of colours is Titian ( Tiziano Vecellio ) : http://en.wikipedia.org/wiki/Titian

- So da cappo,returning to the very beginning of this topic,the colour has a sense in a period-cultural context.

. I keep in my mind the Umberto Eco mention regarding the yellow colour,and still asking me why the infamous,abominable nazi ideas did choose his colour precisely to condemned the jewish brothers with that humiliating yellow star ...

by EUGIM
* Red in medieval mind was not associated with crime.
With blood coming from death I mean.

-Contrary,associated with the blood of Christ,was the highest colour against the others colours.
Red colour was a depiction of energy and sacrifice for all of the human race he did and does till now and forever.
Red was the promise of the Christ guarantee of salvation looking ahead for " that " day becoming forward.

by EUGIM
* I think this topic is not nonsense ...

-Which all of you heard the very stupid quotations regarding this ?

. If blue is associated with wisdom or red with the devil ?

- I just wanna open a discussion regarding this.

Hunting historical support that sustain the use of colours.
On one side we have a realist depiction and on other a supposed symbolism.

. For example and just for begin : Takes a look on LE BATELEUR garment.

by EUGIM
* What about black ?

- In the Esenios ( i can not find any translation) / It is a branch of Jew family knowledge searching for ) .

by jmd
There is no doubt that colour has importance in iconographic art as well as in paintings in both pre- and post-renaissance. I don't think anyone has suggested otherwise.

From that, however, it is a jump to suggest that colours on woodcuts presents us with the same degree of significance. Apart from other considerations, two points play in:

a) the same deck from the same woodblock may have different colours used thereon. As an example, compare the various versions of the Conver Tarot de Marseille;

b) the 'artists' were producing mass-market cards, not carefully completed paintings, and colours would have been in part used that met the budget and the pigments that were able to be easily produced.

This does not, of course, mean that when possible, 'correct' colours would not have been used - but for such, I suspect we may have to await a find of a full deck such as represented by the Sforza Castle World card... and even then, though the careful details are obvious, the colours would still have had to meet budgetary constraints for mass-production.

by EUGIM
* Absolutely agreed with you.

-I ve never suggested that the cardmakers used a hide colours symbolism.

. Precisely I pointed the contrary.
Anyone can deny this fact : The cards had a game purpose.
So the players "must" have clearest the depiction of the image.

-For example,we all know diamonds are red in Poker cards and this is consistent for all the decks today.
. Why was red at the very first time ?
So not black as club was.

- I mean,someone did an election,choose a colour with a purpose.
You brought here the example of Conver.
Just see LE BATELEUR.
All the versions show that his shoes are yellow.
Barely Noblet are not along with Vieville.

. So why are yellow instead of red ?.

by Robert
I think creating and using stencils reveals much about the colour choices used by our cardmakers. The distribution of colour over the card, I certainly believe, was a practical matter of maintaining the strength of the stencil card by using patches of colour so no area was too weak by having too large an area of only one colour.

While it is certainly true that colour would have had "meaning" to those who used cards (just as colour has meaning to us today), to think that colour choices "meant" something to the cardmakers beyond general traditional colour choices, I think, is to overestimate. As JMD points out, even among the decks of one cardmaker, such as the samples by Conver that we have, the colours changed dramatically. Had there been "intention" in the colour, I would certainly have expected more consistency.

by Marcei
W-e-e-e-l-l-l-l-l, I guess I'm gonna jump in here and throw my 2¢ into the kitty, because I think you‘re both right!

Certainly the person planning the color arrangement had to be cognizant of the limitations of stencil making and the need for stencil durability. It is also apparent that an effort was made to have within any given card, a somewhat balanced distribution of all of the colors used in that particular edition.(There are some exceptions in that some cards do not contain all of the colors of their own edition.) Working within these parameters, the designer would still have had considerable leeway in color arrangement. The first concern would have been making the image understood (wavy lines and light blue color mean water etc., but I believe that the very next priority would have been symbolic meaning and then finally, balanced color distribution.

I think it is a mistake to categorically dismiss the use of color symbolism in the case of stencil colored block prints as opposed to fine art. Color provides another avenue of communication, and an image maker, especially in a time and place when few people can read and write, is a communicator. We know that historically, in the most primitive cultures, as soon as people learned to make and work with pigments, those colors took on symbolic meaning. Why would we think that this important characteristic of color would be ignored in the design of cards?

It would not have had to be a rigid system, and each “designer” would have probably created a personal rationale for his/her choice of colors based upon cultural context, personal preference AND even in an effort to link ideas. It is true, of course, that the Conver colors did change dramatically, especially when the printing method changed and the number of colors was reduced, but this development also provided an opportunity to intentionally alter the message a bit. Still, there are elements of the images in which color has remained remarkably consistent even from cardmaker to cardmaker. Also, there are some really quirky inconsistencies within single images where you can only conclude the presence of a cryptic message.

In my over-the-top example in an earlier post (May 14 in the inappropriate location “Use of Tarot de Marseilles as Divinatory Tool”[4th paragraph]) of how one can interpret color in the more historically recent Maxwellian manner, color symbolism becomes a kind of fun mind-game. If a person in the 21st century with a plethora of options for entertainment can be even mildly amused this way, what might a person living in the 16th Century with few “toys” have thought when gazing at colorful cards?

by EUGIM
* The yellow shoes are consistent in every deck with the original at the BNF :

EUGIM wrote:* The yellow shoes are consistent in every deck with the original at the BNF :

And yet, Noblet has them red. 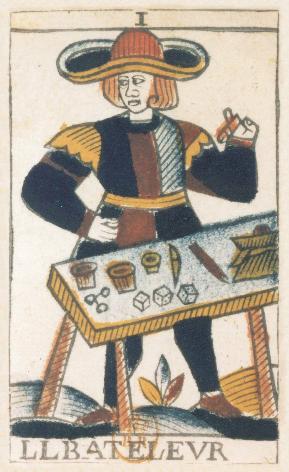