Discrepancies in reporting the Pavia triumphs

Discrepancies in reporting the Pavia triumphs

1 by mikeh
The main source for the titles of the triumphs in Lombardy is the anonymous tarocchi appropriati that was mixed in with some Rimes to ladies in the same place, Pavia, some of them with the same names. This was reported by Rodolfo Renier in 1894, who attributed the composition to Susio. His book is now online, and not only that, the appropriati passage is transcribed at http://www.tarock.info/renier.htm, easy to copy and paste.

Subsequent researchers knew enough not to copy Renier's placing of numbers into the text; in the original manuscript, the triumphs, ladies, and verses do not seem to be numbered from 1 to 21. It is not entirely clear, however, because the volume is bound and even the first letter of the triumphs, invariably "L", is partly not included in the scan available to me.) Otherwise, nobody except Dummett in 1993 (Il Mondo e L'Angelo, p. 327) continued attributing the composition to Susio.

Depaulis, 2013, goes with the majority and has "giustizia". 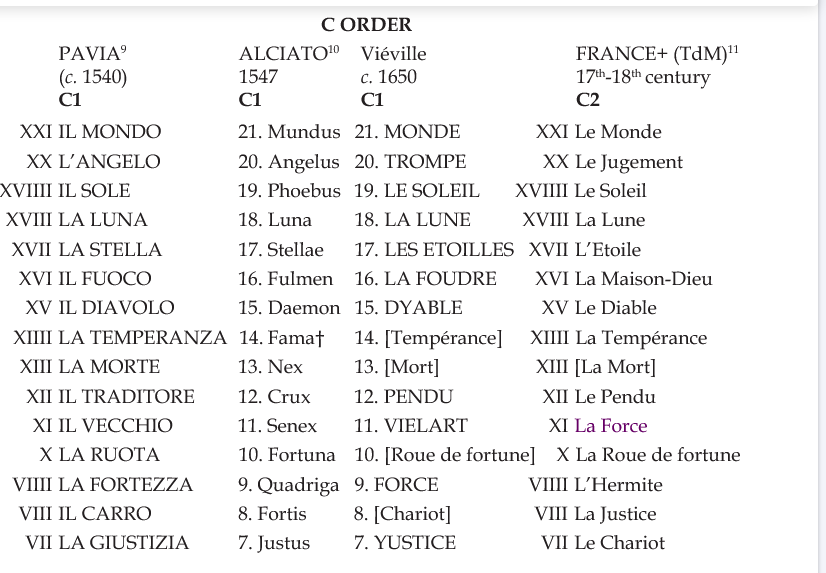 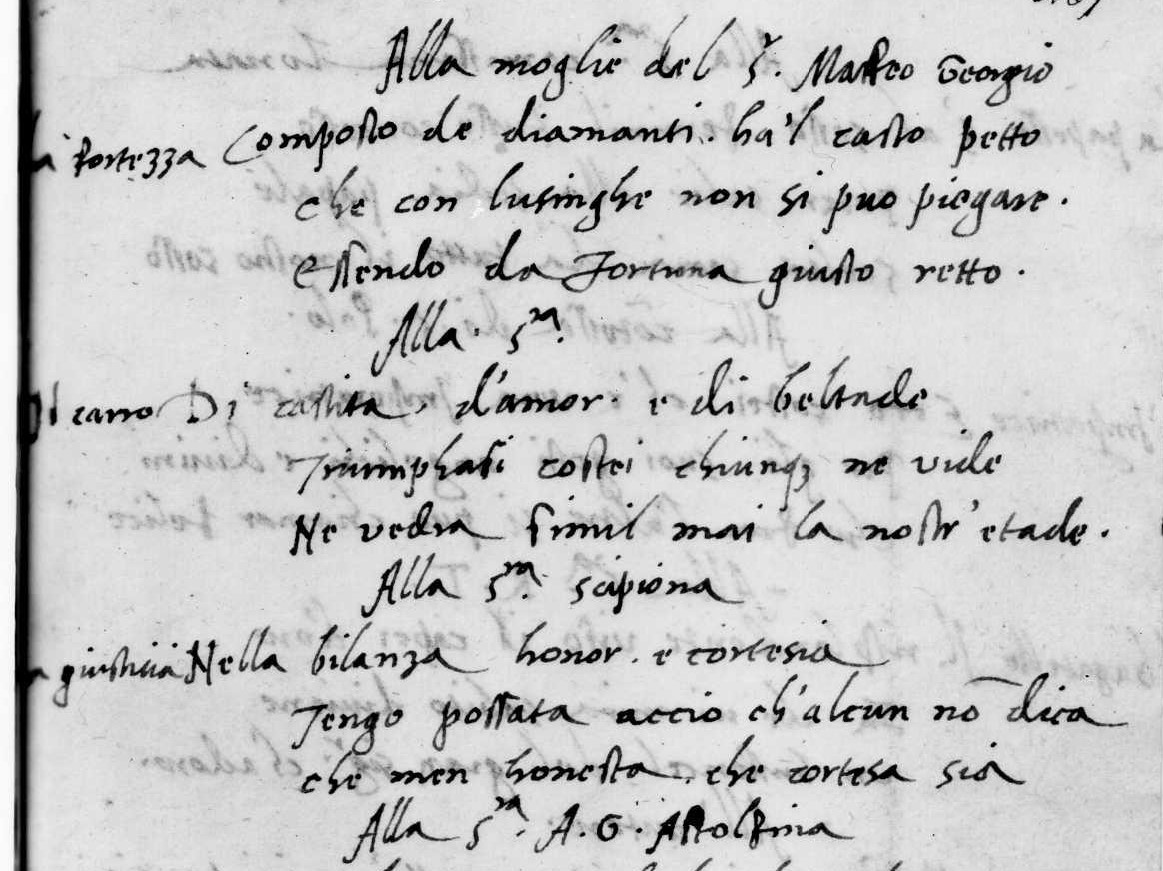 I read "giustitia", even if the first dot over the first i is misplaced. There is no z. True, the t is not crossed. But that is true in the sermo, too. The document from Ferrara reported by Bertoni also has a "t", uncrossed. It is probably standard.

An interesting handwriting variation is in the Sermo de Ludo. The t seems to be crossed. Whether the next consonant is a t, z, or c I have no idea.

In any event, the Pavia manuscript probably has "giustitia," and only Pratesi got it right.

In this case I can't see any significance one way or the other. Spellings varied. The strambatto had "giustitia" in one version (Depaulis, "Early Italian lists," online, p. 41) and "giusticia" in the other (p. 42)

I trust Depaulis here, since he was writing directly from the printed versions.) It just shows how sloppy we are.

The other confusion has to do with card 1. Renier and Depaulis have "Bagatella". And here is Depaulis:

If Pratesi had a spelling, it is not reported on the only page given on naibi.net for that "addendum." Dummett does not include it in his sample.

Moiraghi in this case is the odd one out, with "Bagatello".

So here is the manuscript. I include a lot of text so you can see the difference between final a and final o. 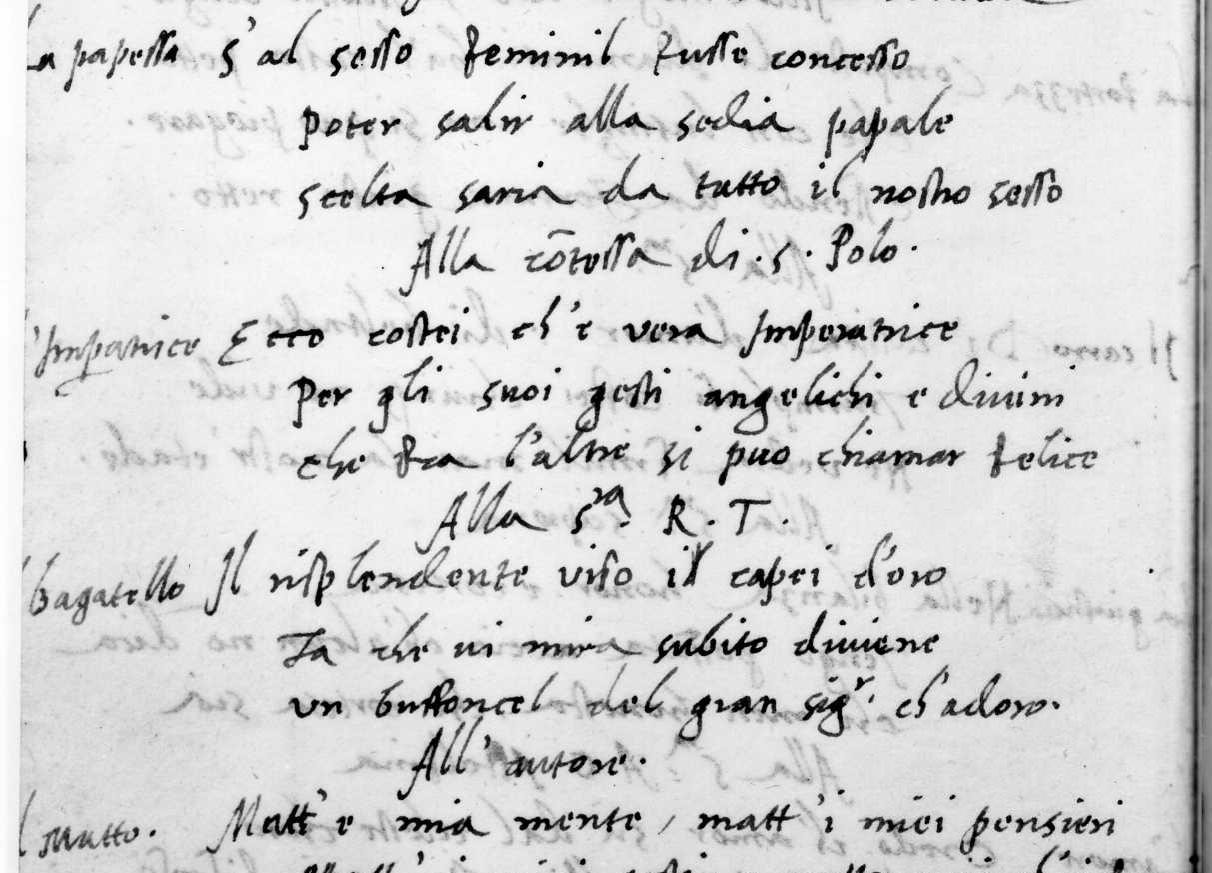 What I see is "bagatello", no doubt, for the only C region spelling of the title (Alciati and Piscina both have words for "innkeeper").

The Sermo has "bagatella", and so do several other B region sources.

It is the A region sources, like the strambotto (see above), that have "bagatello".


Now I want to make a big deal out of the spelling "Bagatello" in Pavia, even if, regrettably, it is the reason I put this post in the Unicorn Terrace.

Pavia's "Fortezza" "Ruota" "Vecchio" and "Carro" are spelled as in Ferrara of that era, as opposed to the strambotto's "Forteza", "Rota" "Vechierello" and "Caro". But the first three are not important, because the "sermo de ludo", in the B order, has them similarly, or close variants, like "caso" and "rotta". I don't know what to make of "gobbo". The hunched back is an early feature of the card everywhere. 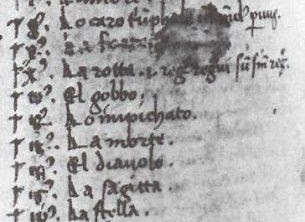 Out of all of this, there seem to me two things I can make sense of. One is "Bagatella" vs. "Bagatello". "Bagatella" is the original word, documented in the 1399 poem cited by Muratori. It makes a thing, the trifles that the sleight-of-hand artist carries with him, into a word for a person. In English there is "faggot," perhaps an odious suggestion that homosexuals are fit for burning. There is also "cut-purse", for someone who cuts purses, and "ne'er do well", etc. In English the closest to "bagatella" would be from "trifle" to "trifler", one who trifles, although I suppose one could call someone of no value a "trifle". From "trifle" to "trifler" is more like the shift from "bagatella" to "bagatello". But "bagatella" is the original, made "El bagatella" in the sermo, a kind of contradiction in terms that is ironed out in "bagatello". It tells me that the card of that name probably was in Ferrara before it was in Florence or Milan. Since I also think it most reasonable that the tarocchi began in the A region, my conclusion, however uncertain, is that the Bagatella was an addition there that spread to the other regions. Moreover, its addition, out of all the possible low-life characters the card makers might have put on the cards, is to take advantage of the play on words, "trifle" as the lowest as well as the ubiquitous entertainer, to attract a crowd for the sale of dubious wares, and con artist of the cup and balls game, the picture immediately suggesting his position in the sequence.

The other thing that seems to me of reasonably possible significance is about "impiccato/impichato" vs. "traditore". "Impichato" clearly implies the death-penalty and shows what is on the card. "Traditore" is a step away. Traitors can and sometimes are pardoned. An act of betrayal would be the kiss of Judas, not his self-hanging. So I am inclined to place that card's origin, too, in Ferrara as opposed to either of the other two, as something in between the Old Man, who is near death, and Death, which is the fact itself.

Both of these considerations support my argument about those cards being additions to a smaller original set of triumphs, at https://marzianotoludus.blogspot.com/20 ... velop.html
mikeh
mikeh

Re: Discrepancies in reporting the Pavia triumphs

2 by mikeh
Andrea Vitali tells me that he sees the Justice title in the Pavia document as "giusticia". That may well be true. If so, I see no consequences other than that everybody else reporting on it got it wrong. Pratesi reported it as "giustitia" and Renier, Moiraghi, Dummett, and Depaulis as "giustizia". All I know is that the latter is too much of a stretch.

Re: Discrepancies in reporting the Pavia triumphs

3 by Nathaniel
Thanks for all those images of the manuscript and its transcriptions! I had overlooked this post before, and only just saw it now. Are you able to provide images of the manuscript for the other verses not included in Franco's transcription, namely Pope, Emperor, and the rest of Matto? That would be very helpful, as it would mean we would have the entire poem viewable online (in one form or another).

I do think you're making too much of the masculine ending on bagatello, however. It's more likely that the word developed from bagatella into bagatello independently in multiple locations. It's a natural change to make, a "correction" of what feels like a mistake. It's therefore not strong enough evidence to suggest an influence spreading from one area to another. I also don't see any significance in the Hanged Man's name being impiccato/appiccato sometimes and traditore other times: That kind of hanging punishment was strongly associated with traitors, so both names would have come equally easily to mind to any Italian who was looking at that card at the time. Just as with Bagatella/Bagatello, this doesn't really support an argument of influence from one place on another.

One other, minor objection that could be raised against your thesis here is that it is incorrect to say that Ferrara used the term Fuoco for the Tower card. The names used in the Ferrarese sources are Sagitta (=Saetta) in the Steele sermon, Casa del diavolo in the Bertoni poem, and Casa in Il Sivello's song (which was probably written for Ferrara; and Casa was no doubt an abbreviation of Casa del diavolo). Lollio and Imperiali both appear to call it Inferno (I reject the alternative reading of Imperiali's poem which interprets him as naming the card Ciel, partly because that is not what the verses in question seem to me to imply, and partly because Inferno is entirely consistent with Casa del diavolo).
It does appear as Fuoco in Garzoni's Piazza Universale (which was probably written near Ravenna but can be considered a Ferrarese source because that area in general, and Garzoni in particular, were very much within the Ferrarese cultural orbit at the time) but that is only because he copied the trump names almost verbatim from a Venetian source (Citolini's Tipocosmia). The place where the card was consistently called Fuoco (or Foco) was Venice.

Also, a minor correction which does not affect your argument: Piscina used the name Bagato for the lowest trump, which is consistent with the names used in Savoy/Piedmont later (Bagat/Pagat etc.) and also with the name on the Viéville card (BAGA).