Together with Finale cards arrived into Florence cards from Oneglia, now one half of Imperia.

I have no idea of the previous history, I only imagine that people have studied the history of papermaking there. If there was a big production of paper, it is reasonable to assume some production of playing-cards as a secondary activity.

At an older text I quoted once an IPCS page ...

The I.P.S.C. gives the following information:
This type of pack originated in Florence in the first half of the 16th century, by 1540 at the latest. It is properly designated "Italo-Portuguese", since, while it has several "Portuguese" characteristics, it lacks others, and the pattern was presumably devised at a date when the Portuguese type was not yet thought of as constituting a distinct suit-system. By the later 17th century, it was in use also in Genoa, where it was known as Ganellini, and in Sicily, where it was known as Gallerini, the word "Minchiate" having an obscene connotation in both areas. It died out in Sicily during the 18th century, when, however, it became highly popular in Rome under the name "Minchiate", which in the 17th century had replaced the original name of "Germini". It seems to have died out in Florence in about 1900, and in Rome probably some decades earlier.

62 by mikeh
Most of Roselle's pictures do not appear on my computer, nor do her links work. I just get a blank spot, in the middle of which is a circle with a horizontal line in it. I do get the one of the chalices, the picture of the book, the Fool cards and two similar backs, a sheet with French writing on it, and one strip from a sheet of minchiate cards 4 through 8, but that's all. I certainly don't see any Libra!

One way to at least get a link that works is to use the "attachment" tool at the bottom, below "submit", then upload from your computer.

Roselle, it would be good to get accurate measurements of what you have, certainly the two dimensions we see but if possible also the thickness. That will convey an idea of whether what we see is itself made up of several sheets of paper glued together.

You still have not told us much about the book you found all this in: is it a printed work, a diary, or what? Does it have a title? Are there watermarks on the pages (as opposed to the cards)? What makes you think that it is before 1700? All that is important information to write down before you return the book. And if you have other books that appear to be from the same period, the same information should be written down about them.

What I have seen so far is two types of deck. One is a horizontal strip cut from a sheet of woodcut engravings, and the deck is a Germini/Minchiate/Ganellini (all just different names for the same thing). Oddly the sheet has not been colored before being cut. That suggests that the strip is from a discarded sheet that never made it to the stenciling stage. The other style is two "Fool" cards in Tarot de Marseille style. We can't tell whether the next word after "Le" is "Fol" or "Mat". The two cards are different sizes. There are also a couple of pieces of back. I haven't seen what is on the front of the backs, or the backs of the fronts. Perhaps they are glued onto some other sheet. But otherwise the two pieces of front look similar.

The closest similarity I can find is with Jean Payen of 1713 Avignon. But there are many differences. What links it to Payen is the style of cloak, without bells, that the man is looking vaguely upward rather than straight ahead, and his beard is less pointed.. Below I have combined Rosele's card with two others, Payen in the center and Madenie to the right, Dijon 1709 (at least that's what they look like to me; the website I found them in didn't say). In Thierry Depaulis's nomenclature, Payen is "type I" Tarot de Marseille and the other type II. I'd say Roselle's is closer to Payen's. 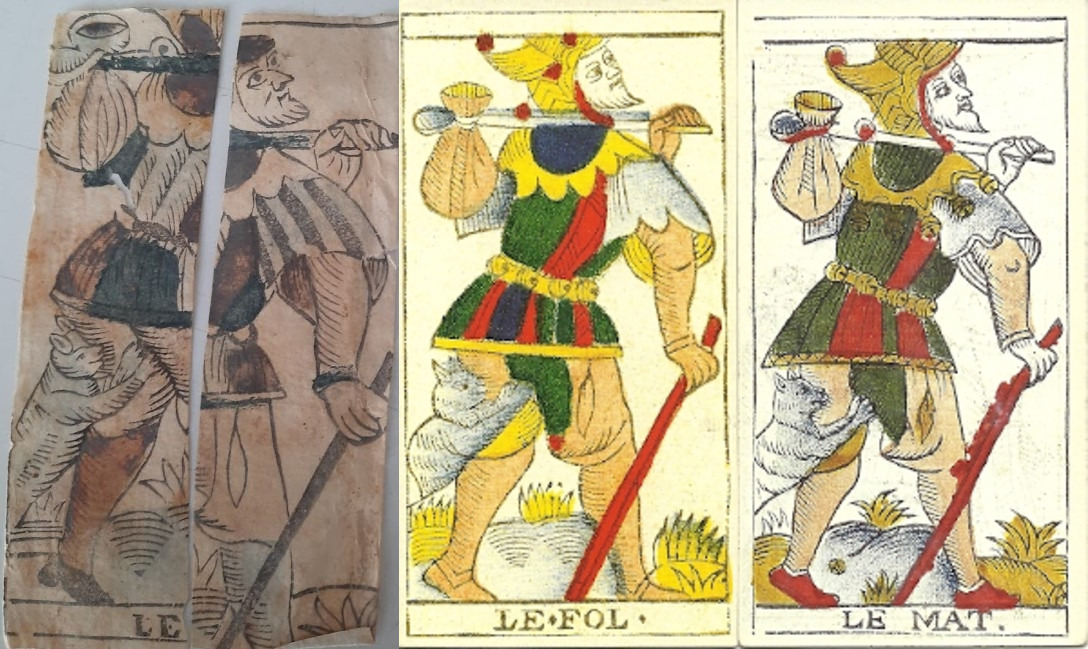 The Germini/Minchiate/Ganellini deck is similar to those produced in Lucca in 1722-1745.

One could surmise that both decks are from the same period, i.e. roughly the first half of the 18th century, conceivably a little earlier. But with more information perhaps more could be said.

Huck, did Franco give dates?

Together with Finale cards arrived into Florence cards from Oneglia, now one half of Imperia.

Interesting idea - "carte imperiali" could mean cards from Imperia (or rather from the region of the Impero river, because the town of Imperia did not have that name before Mussolini). It's also interesting that these cards seem to have been bound together with papers with French trump names written on them. As I said before, this means the minchiate cards might have been French copies of an Italian pattern (maybe from Imperia), or the French influence in the area was simply so great that you end up with Italian cards and French writing all together in the same book cover.

mikeh wrote: 29 Apr 2021, 10:51 Most of Roselle's pictures do not appear on my computer, nor do her links work. I just get a blank spot, in the middle of which is a circle with a horizontal line in it. I do get the one of the chalices, the picture of the book, the Fool cards and two similar backs, a sheet with French writing on it, and one strip from a sheet of minchiate cards 4 through 8, but that's all. I certainly don't see any Libra!

Mike, you really don't see the photo of several fragments assembled together to form one sheet? It's in this post here: viewtopic.php?p=23819#p23819 The reassembled sheet is entirely of trumps, including Libra.
The fragments evidently came from two different sheets, but were cut up in a similar way. It doesn't look like they had any other sheets of paper stuck on the back of them—as you said, it looks like a printed sheet that was discarded before it went any further in the cardmaking process.

The two Fool fragments both came from the same card, as Huck made clear here: viewtopic.php?p=23767#p23767
The two back fragments were presumably both from that one card.

As for what the book was, Rosele has said that it was originally a book of empty pages which a priest used as some kind of registry (probably for births, christenings, marriages, etc.) in a parish church. The registry entries were all handwritten, and she can presumably tell that the binding is from before 1700 because the earliest entries in the registry are from around that time.

65 by Nathaniel
This is the image of the assembled sheet:

I put the ruler on a card,
the sheets have no watermark, I can measure the distance between strands and wire rods if you want 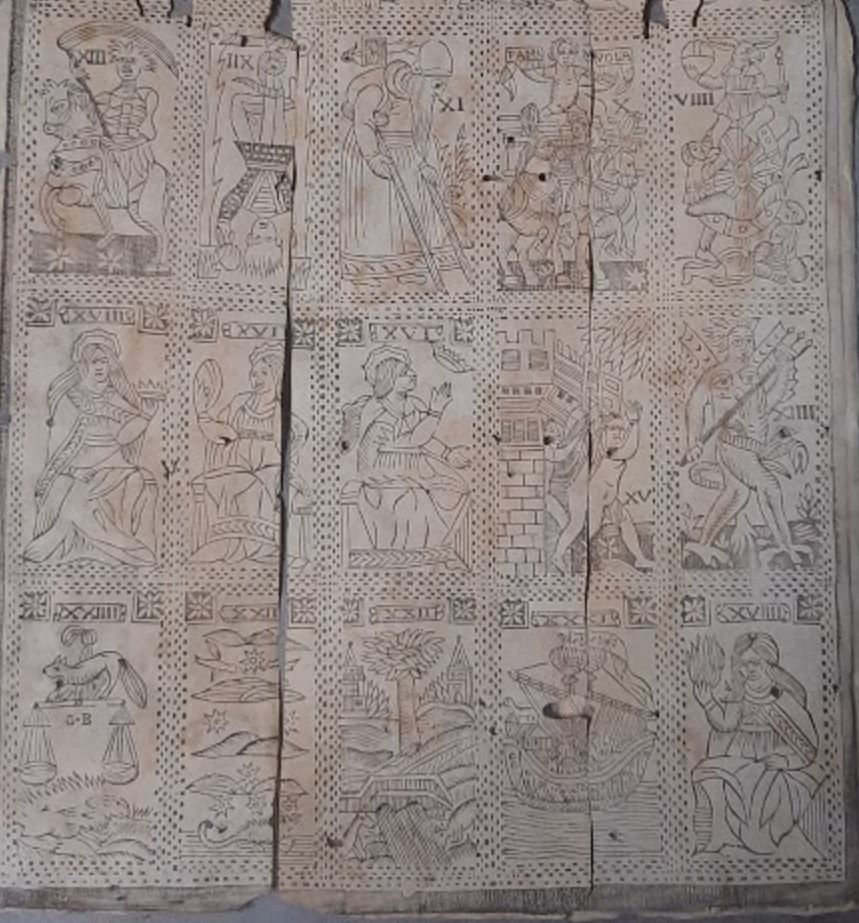 Huck, did Franco give dates?

69 by Huck
Earliest dates for Ganellini


In April 1585 he participated in the diplomatic mission of Lannoy to the Madrid court of Philip II and contributed to the negotiations to solicit the conferral of the Golden Fleece to Francesco I de 'Medici, then delivered in June of the same year, as well as to the negotiations for the restitution of Piacenza to the Farnese duke.
On the way back, Vannozzi was sent by Lannoy to Turin to demand a debt of 300,000 scudi from Jacqueline d'Entremont, 'Madam l'Ammiraglia', and stayed here for three and a half years. He attended the Studio and at court served Baron Paolo Sfondrati, agent and ambassador to the Savoy for Philip II, receiving the task of founding the Accademia degli Incogniti from Duke Carlo Emanuele I. Profitable contacts with the writers and scientists present in the Savoy capital: Cavalier Battista Guarini, Annibale Guasco, Ciro Spontoni, Bartolomeo Zucchi and the mathematicians Giovanni Battista Benedetti and Francesco Ottonai.

At this opportunity (4 years in the region of Genoa and Turin) he might have learnt about the existence of the terminus Ganellini.
Charles Emanuel had become duke in 1580 and he married in 1585 a Spanish princess.
https://en.wikipedia.org/wiki/Charles_E ... e_of_Savoy
Charles Emanuel I is already known to us by the thread "1584: Tarotica"
viewtopic.php?f=11&t=767&p=10977&hilit=tarotica#p10977

[February 2012: Thierry Depaulis comments that Ganellini was played in Genoa as early as 1600 before the game became known in Sicily. Also, tarot cards were made in Palermo as early as 1630, much earlier than Villabianca assumed.]

Unluckily there is nothing to find about this detection ... at least in the moment

Automatic translation:
When I invited Dummett in Genoa for the "Analytic Philosophy and European Culture" meeting and in one second Genoese occasion where truth and philosophy would be talked about, Dummett had asked me if I still knew anyone in Genoa who knew how to play the game of tarot called "cannellini". 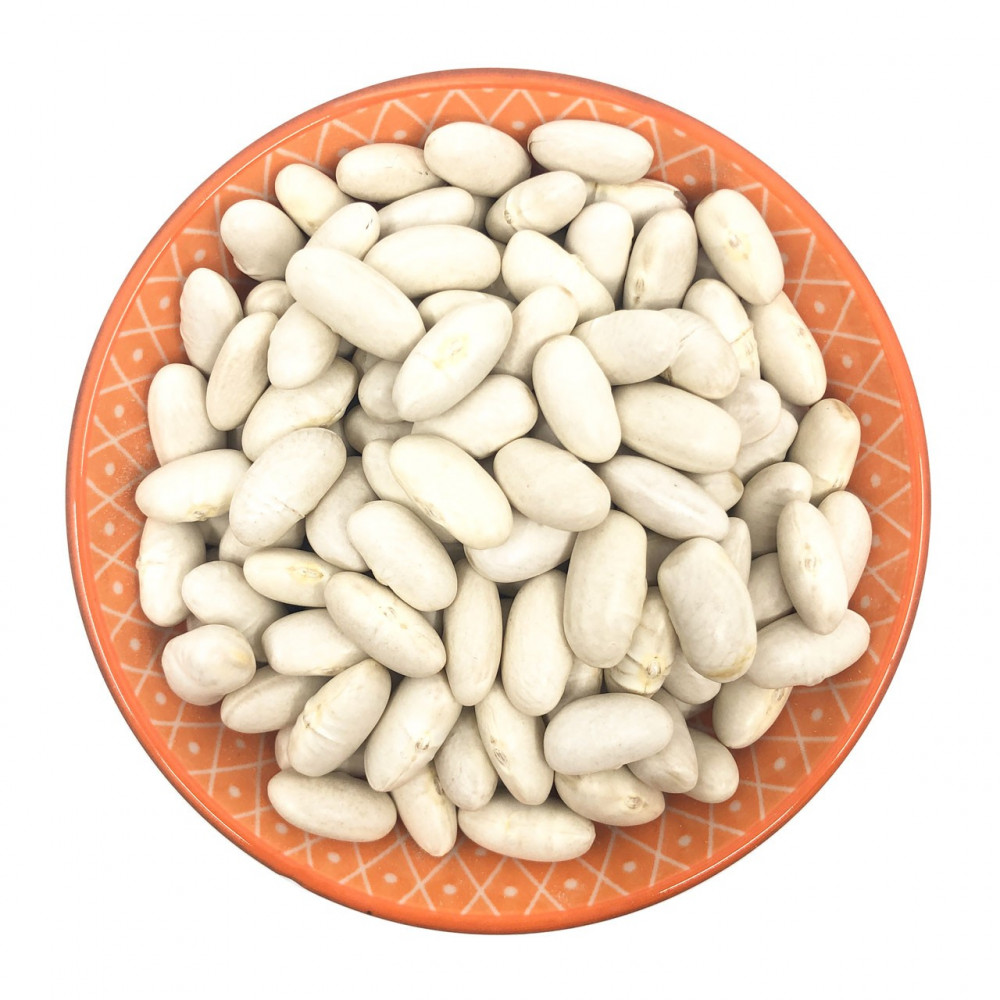 
169 Faustino Solesio, Genova. 97/98 (Ace of Coins missing). Color
lith., 98x58 mm, square corners, no
index mark. Backs: Plaid, bluish green
and brown. Circa 1930.
Lit.: Comp. Braun 793, Mann coll. 215;
Dummett [1980] p. 342; J. Darquenne in
Joker-Journal 10/85, pp. 10-13.
The minchiate died out in the 19th century, with the exception of Liguria where
they were called Ganellini. Their last and
probably sole remaining maker, F. Solesio, stopped producing them at the beginning of the 1930ies: this is why our deck
can be considered as one of the last
specimens of the species, and with
that in the very rare variant counting
98 cards that arises through a supernumerary trump.

We’ll quote Darquenne now who reports
on a deck from circa 1900 (our translation): The additional card is obviously to
rank as the 98th. Truly it can only take
that place for it belongs by virtue of its
background color to the last trumps, the
„rossi“, and the sequence of the remaining unnumbered trumps (Star-MoonSun-World-Judgment Day) is anchored in
such a rich tradition that we cannot think
of another place. The theme of the illustration assigned to that card confirms our
assumption. It shows a naked woman
running to the left, standing on a spoked
wheel (in our younger copy it is just an ornament, maybe a cloud) and holding
with both hands the ends of a ribbon that
is certainly meant to represent Fortuna’s
sail. And what would be more logical
than to crown a deck of cards with the
capricious goddess of luck?
Almost mint.
US$ 2,818.00 € 2.450,- 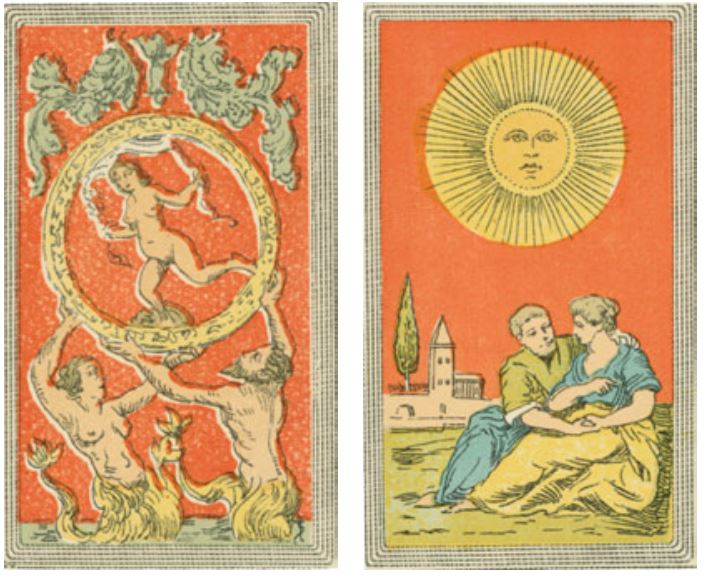 I've a small black-white picture of the 98-card-deck in the Tarot-Tarock-Tarocchi catalog 1988 of the Leinfelden Museum. It shows a deck of second half of 19th century. Card 98 looks similar, but the world card is very different. The producer is given as unknown.
Huck
http://trionfi.com