The Shield of the Chariot

The Shield of the Chariot

1 by Ronan
I have come across a detail in Pliny’s work, which may well shed light on one of the later occultist modifications of one of the Tarot cards, namely, the Chariot.

The detail in question is the phallus, or lingham as it is usually called, following the Sanskrit term, depicted on the shield on the front of the chariot. This makes its first appearance with Éliphas Lévi’s depiction of the card in his book, Transcendental Magic, later to be taken up again by Waite for his deck.

In passing, the Chariot in the deck by Bernardin Suzanne bears a lozenge-shaped glyph which does conceivably have a passing resemblance to a lingham, or at least to what the later occultists put on the heraldic shield instead, but it could just be a pair of stylised initials, or a corporative mark, instead. https://www.tarot-de-marseille-heritage ... llery.html

Robert Place has an article which provides the relevant images, although he gives no information regarding the phallus other than to say it is an addition of Lévi’s. https://robertmplacetarot.com/2015/05/14/397/

In any case, in Pliny’s Natural History, we find the following quote (notes included; emphasis mine) concerning what has come to be known as the fascinum:


If we are ready to give faith to such statements as these, we must believe also in the efficacy of the following practices: upon the entrance of a stranger, or when a person looks at an infant while asleep, it is usual for the nurse to spit three times upon the ground; and this, although infants are under the especial guardianship of the god Fascinus,12 the protector, not of infants only, but of generals as well, and a divinity whose worship is entrusted to the Vestal virgins, and forms part of the Roman rites. It is the image of this divinity that is attached beneath the triumphant car of the victorious general, protecting him, like some attendant physician, against the effects of envy;13 while, at the same time, equally salutary is the advice of the tongue, which warns him to be wise in time,14 that so Fortune may be prevailed upon by his prayers, not to follow, as the destroyer of his glory, close upon his back.

12 This divinity was identical with Mutinus or Tutinus, and was worshipped under the form of a phallus, the male generative organ. As the guardian of infants, his peculiar form is still unconsciously represented in the shape of the coral bauble with which infants are aided in cutting their teeth.

Could it be the case that Lévi had either read this (or a similar textual description), or seen an illustrated depiction of such a chariot? I have been unable to find a corresponding image, but one never knows.
mikeh
mikeh

2 by mikeh
Thanks for drawing our attention to this connection, Ronan. I've seen the phallus on the chariot before (notably the drawing in the Hypnerotomachia Porphilii (Venice, 1499), viewable at http://www.codex99.com/typography/82.html and probably other places on the web. but if I ever thought to connect it to Levi, I have forgotten about it. That of course is not the military setting of the card and of Pliny's reference.. The Hypnerotomachia illustration was probably inspired by a passage in St. Augustine's City of God, book 6. I can't find it in the "Church Fathers" translation online, but it is quoted, I hope accurately, at https://books.google.com/books?id=TRI4D ... ts&f=false. In this case it is not on a general's chariot, but a god's, or someone impersonating a god, in a rural setting. Levi might have run across it as a seminary student. A source in English near Levi's time is at http://www.archaeologicalresource.com/B ... 7.html?i=1 (search "car"). I expect that Levi did not have to have been too widely read to have come across one or more sources in French or Latin. However the closest to what is on his card is indeed the passage in Pliny about the generals' chariots, which I had not known about; nor have I seen pictures in that context.
Ronan
Ronan

3 by Ronan
Thanks Mike for the illustration.

Pliny’s quote turns up in a few places in works published around that time (Döllinger’s history of paganism and christianity, for one), and Constant presumably was well-read in the classics. Perhaps he had that image - or something close - in mind when writing the commentary for his own chariot? At any rate, he did not see fit to reproduce the fascinum tel quel. 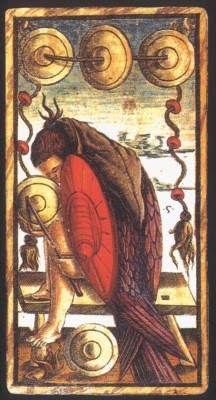