1 by Huck
Klaverjas is - likely - an 18th century game. It became the Netherlands national card game and it took some influence on the various Jass games, which became the national game of Switzerland.
One detail is of special interest: The Trump-Jack got an extraordinary card value of 20 points, the trump 9 got the value 14 pints. This feature appears in many variants.

The terminus Fama appeared in the Tarot game family at the cards 14 (connected to Temperance) and 20 (connected to Angel). This is discussed at the thread "Fame riddle" ...
viewtopic.php?f=11&t=747

Inside the 5x14-theory the hypothesis was formed, that the 20 special cards of the PMB (Pierpont-Morgan-Bergamo Tarocchi) had to be parted in a group of 14 and an additional group of 6 cards. The theory assumes, that the group of 14 cards had originally together with court and number cards totally 70 cards, forming a 5x14 deck.
6 cards were added at a later time. Inside this theory it's assumed, that the Angel (or judgment) had originally the position 14. In the later development the Angel had a relation to the number 20.
http://trionfi.com/0/f/11/

Klaverjassen is said to have existed in the year 1700. So I've read once, I remember.
https://www.pagat.com/jass/klaverjassen.html ... gives rules.

I searched for the word at books.google.com. The earliest appearance I found for 1762 ...
https://books.google.de/books?id=sJxcAA ... en&f=false

As these type of games had many names, it might become difficult to search for older appearances. But that's from 1749 ... 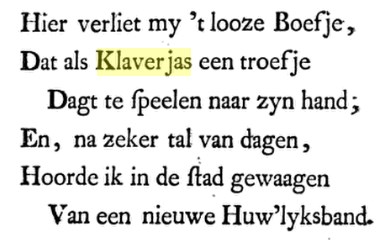 It seems, that the term "Klaverjas" is just the name of the Jack of clubs, possibly cause "clubs" was the trump suit ... earlier. Klaver means "Klee" in German and trefoil in English and trefle in France, so simply it's the clubs-suit in card games. Jas likely means Jack in English, in the Cologne version of the game the trump Jack is addressed as Jappa.
Modern versions decide the trump suit during the game.

English wiki gives 1821 for the oldest rules of "Klaberjass".
https://en.wikipedia.org/wiki/Klaberjass

It has a historical part:

"Klaverjas" is Dutch for "Jack of clubs", and there is evidence that the game once went through a stage in which clubs were a preferred suit for trumps.[13] The term "Jas(s)" for the Knave and the game was first recorded in the Netherlands in 1721 and seems to have given rise to the English term "Jack". It seems that by the end of the 18th century, Dutch mercenaries had brought the game to Switzerland.

The earliest recorded Jass game appears to be the two-handed game described in a Dutch book from 1821 as "Smoojas" ("Jewish Jass"). The following account is based on a slightly later version, where it is alternately named "500" or "Klaverjassen"[14] and on David Parlett's version of the 1821 rules.[1]:308f The most fundamental differences to modern two-handed Belote are tens ranking in their natural position, slightly different scoring values (more similar to Manille and All Fours), and more restrictive rules for trick-play (in the second phase). Apart from the trick-play rules, these characteristics are shared by several modern Dutch games of the Jass–Belote family.[nb 4] Another difference is a first phase as in Sixty-Six, over which the melding activity is spread.

score meld
100 sequence of ≥5 in suit
200 4 Jacks
100 4 Kings, 4 Queens
50 sequence of 4 in suit
20 sequence of 3 in suit
After both players have received 9 cards, a card is turned face up to determine the trump suit. A player who holds the Seven of trumps may exchange the two cards, so long as the stock is not empty. The game continues with two trick-play phases, in which ranks and point values of cards are as shown in the table.

In the first phase, the second player to a trick may play any card and need not follow suit. The player who leads may also declare a melding combination held in the player's hand and score for it as shown in the table. However, if the second player can counter with a higher melding, the second player scores instead. Every combination of cards may only be declared once, but it is allowed to declare a longer sequence that contains a shorter sequence which was declared previously. Independently of melding, a player who leads a king or queen of trumps and holds the other card, can score 20 points for marriage by showing it. After every trick players complete their hands from the stock.

The second phase starts when the stock has been exhausted. Now the second player to a trick must follow suit if possible, and must take the trick if possible while following suit. There is no melding in this phase. The winner of the last trick scores 5 points, and a winner of all nine tricks in the second phase scores 100 points.

The game is played for 500 points; by melding this target can be met in a single deal.

The 20 points for the trump-Jack and 14 for the trump-9 is not mentioned. But in a diagram this info is given in connection to the year "1836".

The German(Swiss) Jass-wiki-article is very optimistic. It has, that the Jass game came from the Orient in the 14th century, and gives no reference.
https://de.wikipedia.org/wiki/Jass
According this article Swiss Jass games descended from the Dutch Klaberjas, wandering with home-coming Swiss mercenaries along the Rhine valley to Switzerland. Other reports see this detail different. The Schweizer Garde in the Netherlands started around 1750 (as far I know from earlier researches).
But one point seems clear ... the rule with the trump-Jack (20 points) and the trump-9 (14 points) seems to be part of a majority of the Swiss Jass variants.

Master PW made a 5x14-deck with round playing cards around the year 1500, likely when he returned home from a longer stay at the courts of Roman king Maximilian and his Italian wife Bianca Maria Sforza. Master PW made various woodcuts to the war between Maximilian and the Schweizer Eidgenossenschaft 1498-1499. Peace was made in September 1499 and Maximilian lost the war and had to accept the Swiss independence.
It seems, that Master PW had worked a longer time for the court. Bianca Maria Sforza was well known for her addiction to playing cards. Perhaps Master PW made also other cards.

His 5x14-deck had 2 additional cards, one showing the coat of arms of Cologne. 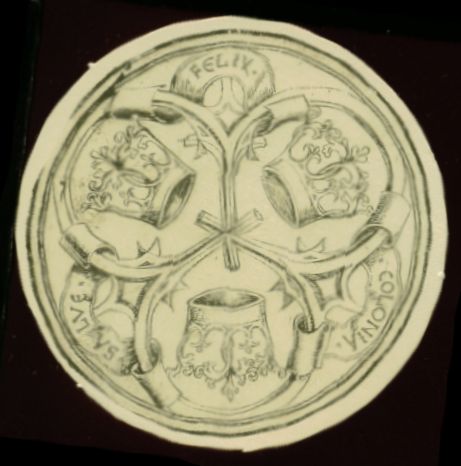 "Salve, Felix Colonia" and 3 crowns for the 3 Magi

There is not much known about playing cards in Cologne, but here the suspicion is given, that in Cologne the decks had possibly 14 cards in each suit.

The same observation is done some time later, when the Cologne artist Anton Woensam added 8 cards to a deck f Schäufelein in Nuremberg to increase the number of cards for each suit from 12 to 14. Perhaps one can conclude from this, that the Cologne region preferred 14 cards for each suit instead of 12 in other German regions.

Cologne is near to the old Burgundy and the following states Belgium and Netherlands. There was always traffic and trade between these regions. If Cologne had the playing card tradition "14 cards for each suit", then this might relate to an old Burgundian tradition. That, what is available information to the Dutch game Klaberjas gives the suspicion, that Klaberjas is the mother game for the rule "20 points for trump-Jack and 14 points for trump-9". The curious 14 points might go back to the tradition "14 cards for each suit".
In Cologne also a Klaberjas game is played, it's called "Klammern" or "Klammerjass".
https://de.wikipedia.org/wiki/Klammern_(Kartenspiel)
The description gives the rules without 20+14 points, but I learned the game here with 20+14 points for the 2 highest trumps.
Huck
http://trionfi.com

2 by Huck
A wiki page knows something ...
https://en.wikipedia.org/wiki/Mariage_(card_game)

Mariage (German: [maʁiˈaːʒə]) or Mariagespiel is a German 6-card trick-and-draw game for two players in which players score bonus points for the "marriage" of King and Queen of the same suit. The game, first documented in 1715 in Leipzig, spawned numerous offshoots throughout continental Europe. Many of these are still the national card games of their respective countries.
The King–Queen card games, also known as the marriage group, are a family of point-trick games of which the Mariagenspiel is the earliest and most typical representative. Games in this family are typically played by 2–4 players using a pack of 20–40 cards, with aces and tens scoring 11 and 10 points in tricks, respectively, and marriages scoring 40 points in trumps and 20 points in a plain suit.[1]:261ff[2] An elaborated form of Mariagenspiel known under various names including Klaberjass and Bela is especially popular among Jewish communities and spread worldwide. Its offshoots form the Jass group Jack–Nine card games, characterized by the fact that the Jack and Nine of the trump suit are the highest trumps.[1]:305[3]
According to David Parlett, the modern German/Austrian Mariagenspiel variant 66 or Schnapsen, which remains close to the original, is "one of the best two-handers ever devised".[1]:261 The "marriage" theme seems to have originated in France in the context of unrelated card games. Two-handed Schnapsen and three-handed Mariáš and Ulti are the most popular card game in the area of the former Austro-Hungarian Empire.[4][5][6][7] Klaberjass, first documented in the Low Countries as a Jewish game, developed into Dutch Klaverjas, Swiss Jass and French Belote. Bezique and its variants Binokel and Pinochle are further examples of popular games in the King–Queen or marriage family.[1]:305ff

This theory of Parlett seems to sort the mariage card game as earlier and mother to the Jack-nine games. He gives the year 1715 as the first note. 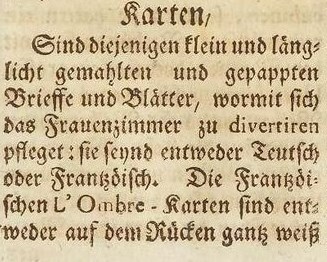 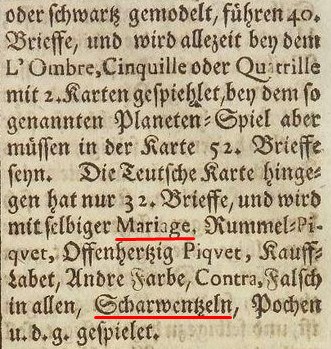 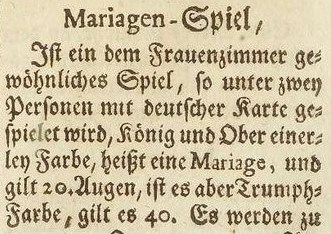 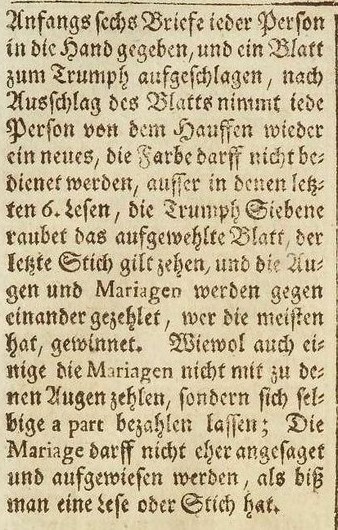 After a short fight with the search engine I got something, which is older ... 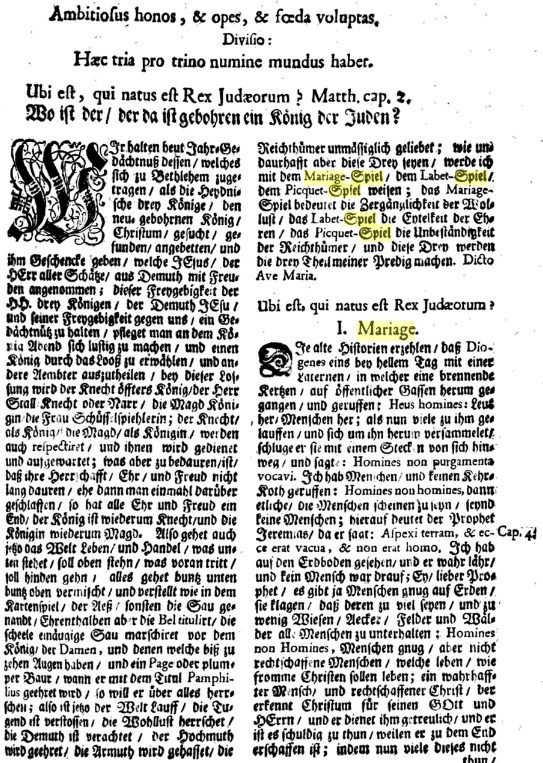 A longer preaching against the Mariage game from 1710 ... and also against 2 other games at the following pages.

With the improvement of the search engines and the number of the connected books a lot of dating improvements become possible.
Huck
http://trionfi.com