1 by spiralingcadaver
So, first, this is my first post (on any tarot forum) and this is very new for me.

Second, I'm honestly a bit nervous about sticking my neck out and posting this, because I know how opinionated people can get about things they care about, and I'm definitely less knowledgable than most people here.

While this is repeated below, I'm also going to preface the post with the same explanation: This deck is largely about trying to maintain the sensibility of tarot decks, while altering them for legibility/openness, and my own illustration style.

I'm looking for feedback,which is why I came to this site- the short version (again, repeated in more detail below) is that I'd like to be alerted to any decisions I've made which are categorically inaccurate (as opposed to, for instance, missing interpretations). If you want to leave feedback, I'd greatly appreciate it (either here, or on my blog- that'll also get you the complete width image, since (at least on my screen) I'm seeing the image cut off by the forum parameters).

The premise
The title pages to chapters of a graphic novel I've been illustrating are tarot cards. I did some very basic research when initially illustrating these, but, as I did more, I became more invested in the process, and refined my vision of the cards.

At a certain point, I realized I wanted to actually create a whole tarot deck, and put more research into the aesthetics of the cards.

These cards are based on the most popular illustrations of the Marseille imagery, and I tried to keep the sensibility of the original designs, while modernizing some of the graphics for consistency and legibility. 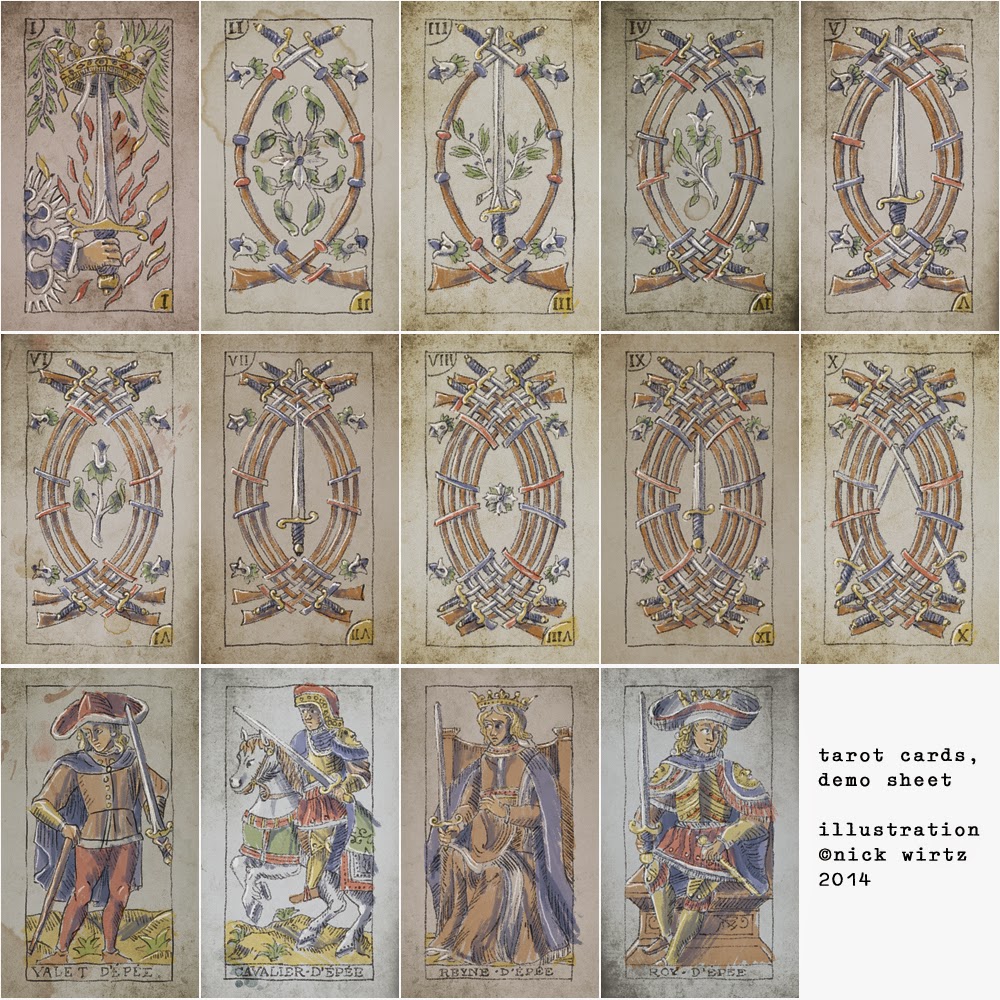 Design
Other than the illustration style itself, some of the notable design choices I made:
-The numbered cards (1-10) have their numbers marked in the corners, per regular playing cards, for ease scanning. Numerals have been replaced with the more common variants (for instance, 9 is "IX" instead of "VIIII").

-All shading is from the upper-left corner, making it easier to quickly determine orientation

-Each of the basic numbered cards' bottom number is gold, to make the orientation doubly clear

-The swords and wands (clubs, etc.) were based on the least similar historical variations I could find within the aesthetic sense: Instead of the more traditional flared ends on both, the wands have rounded tips while the swords are partially unsheathed.

-The suits have more heavily consistent colors, with the swords & wands emphasizing blue, and the cups & coins emphasizing red, both in the dominant colors and in the shading hue. These match the respective regular suits of spades & clubs (blue instead of black) and hearts & diamonds.

-The face cards in each suit feature matching details (such as the capes in the above set) to repeat visual notes without limiting palate.

-A number of proportions on the illustrated cards and ornamentations on the numbered cards have been altered remove some of the more distracting proportion issues and open up the graphic space on some of the number cards, while attempting to remain faithful to the style and content of the originals.

Feedback
So, these are a draft that I consider quite close to done, and I'll be putting up the other suits as they're completed, but I'm looking for feedback. (Note: these include bleed for printing, so the margins will be smaller once printed)

I recognize that there are details I may have missed or ignored, regarding some of the more specific or historical connotations. I'm okay with this (and hope you are, too): The focus on this deck is aesthetics and legibility. However, details are important for functionality (as a factor of being able to read the cards' meanings), too, so, my first feedback question (if you happen to know your tarot):

-Are there details I've gotten wrong that are absolutely essential to the cards? ex: Did I misinterpret water as ground or elide some detail all iterations contain? (This is opposed to details I missed, that aid in certain interpretations or are in many versions.)

Also, the other aspect of functionality yields another feedback request:

-Are there ways I could improve legibility? Are there choices I've made which make cards harder to read?

More generally, I'd gladly welcome constructive criticism or advice on content or style, though obviously it's a bit late to change any major stylistic elements.

... nice deck.
But you're here in a forum for Tarot history, mostly dedicated to Tarot facts of old times and mostly not interested in reading questions and design of new cards (even if they look old). Occasionally we've "reconstruction old Tarot decks" themes here, but that' rare.

3 by spiralingcadaver
Hi, thanks (both for the compliments and advice

I know that there are a number of theories on the historical symbolism of the marseille deck (i.e. that certain illustrations are specific references), so was thinking that it'd be worth checking here for that side of things, too- for instance, I haven't uploaded it, but it seemed appropriate to put the eagle heraldry on the emperor/empress in the yellow/black/red of the holy roman empire, as it made the most sense, but that's just guesswork.

4 by Huck
Well, you're right, some persons are very specific about the symbolism of the Marseille. However, when the Marseille Tarot developed, divination with cards wasn't developed ... as far we do know this from the historical point of view.

There are (or there were) some French speaking groups .... perhaps these are also of interest for you. I don't have the address, but you'll likely find them in the web.

5 by spiralingcadaver
I'm not sure if I'm miscommunicating, or if I'm not understanding what this forum is for...

For instance, I'm probably not concerned with drawing the wrong type of ornamented flower because of some interpretation that's become a common one, but am interested if one of the face cards is blonde since they're supposed to be a given figure.

Is that not the sort of relevant question here?

6 by Huck
You wrote a sentence ..
"Are there ways I could improve legibility? Are there choices I've made which make cards harder to read?"
... which made me think, that you're interested in the divination aspects.

Maybe I misinterpreted you.

If you're interested in details of the early presentation of the Marseille decks , there are people, who were once active in the reconstruction of old decks. Camoin belongs to them (see the French forum I gave), Flornoy, but he has died some time ago, Yves Le Marseillais.

Yves Le Marseillais is a member here, but he was a longer time not active. You could try to write him a private message or email to him to capture his attention.

I thought that there was more overlap between symbolism of both reading and history, so had merged the concepts mentally as both visual details that had meaning, though it looks like the two schools are more distinct.

Thanks for the tips, I'll check out those leads.

8 by Huck
Tarot divination started with Etteilla, who produced an own Tarot deck in 1788, very different from common Tarot.

The Tarot de Marseilles existed then already in different forms. Etteilla's deck got its place in the general divination scene, which had a center in Paris then. But Etteilla wasn't dominant. Dominant became Madame Lenormand, from whom it is said, that she used various decks, but not much Tarot cards or never Tarot cards.

About the Tarot de Marseille I've read, that it served till the mid 1800s more or less for card playing.

Etteilla wrote, that he started with card divination in the 1750s, for Germany we have a first divination note in 1763, Casanova offered one for 1765 in Russia. Forms of minor quality of card divination are known from 1505 and then occasionally, but there is a qualitative difference between these early minor divination examples and the later ideas of cartomancy.
Ross, active here, wrote a good collection of these earlier examples.

9 by spiralingcadaver
I already knew that the Marseille deck isn't very closely linked to divination and that it wasn't historically part of it. I'm actually interested in making the deck specifically for the historical games (hence some of the changes for quick legibility, for instance), but didn't want to ignore/alienate people whose interests were the divination side of things, historical or not.

Thanks for the other details, though- the more my knowledge base has grown, the more I'm interested in the form's evolution.

10 by Huck
Yves Le Marseillais engaged for these both decks: Madinie 1709 and Chosson 1736