1 by Ross G. R. Caldwell
Due to the constant interest in this subject, I thought it best to start a thread for everything concerning the text of Jacopo Antonio Marcello, and his copy of Marziano's "De deificatione sexdecim heroum".

First, Marcello's letter to Isabelle of Lorraine, followed by my transcription and translation. They are from 2003; I know my Latin has improved since then, and I hope other eyes will make suggestions as well.

As always, for larger versions of these images, click on the URL below each picture. 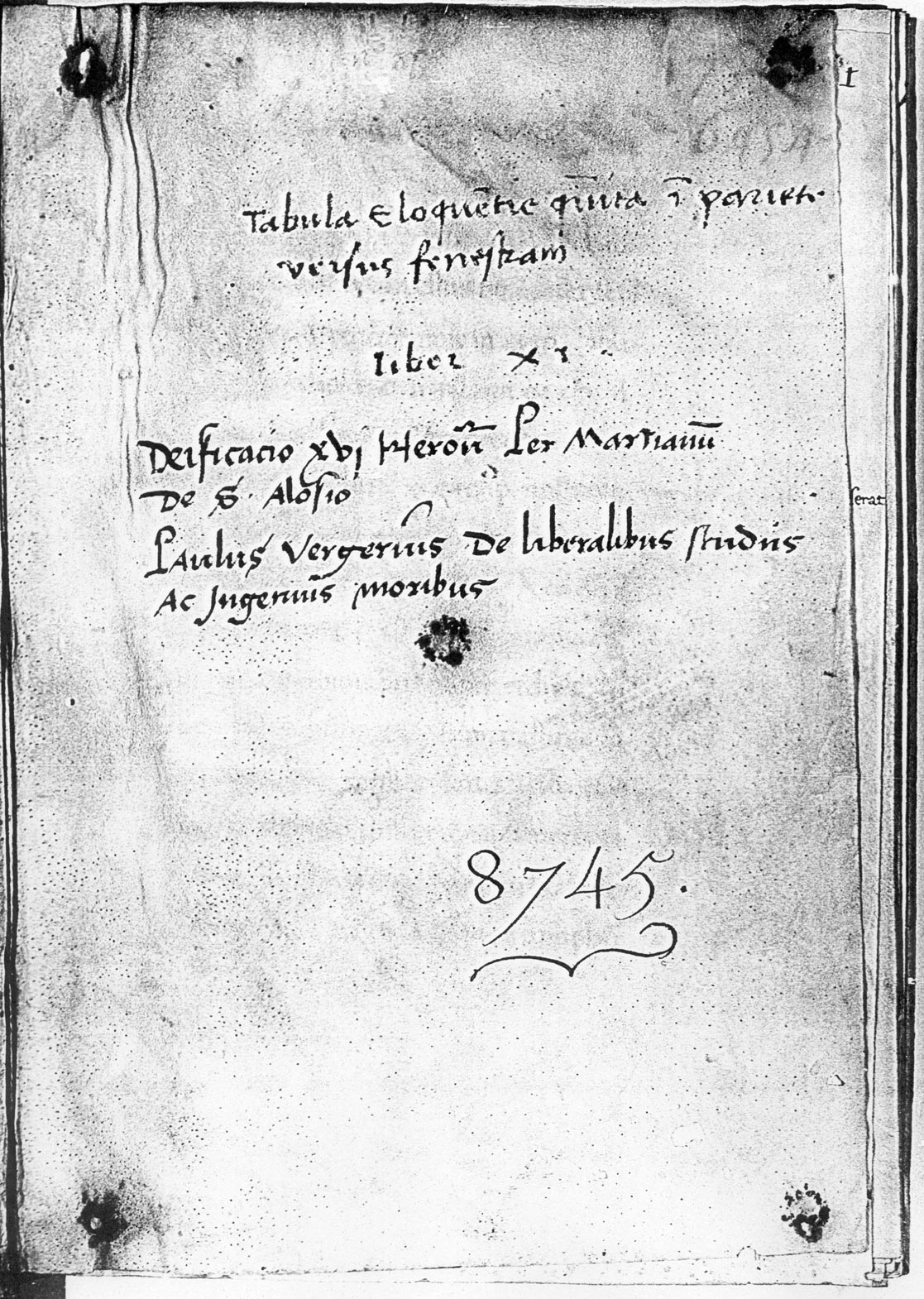 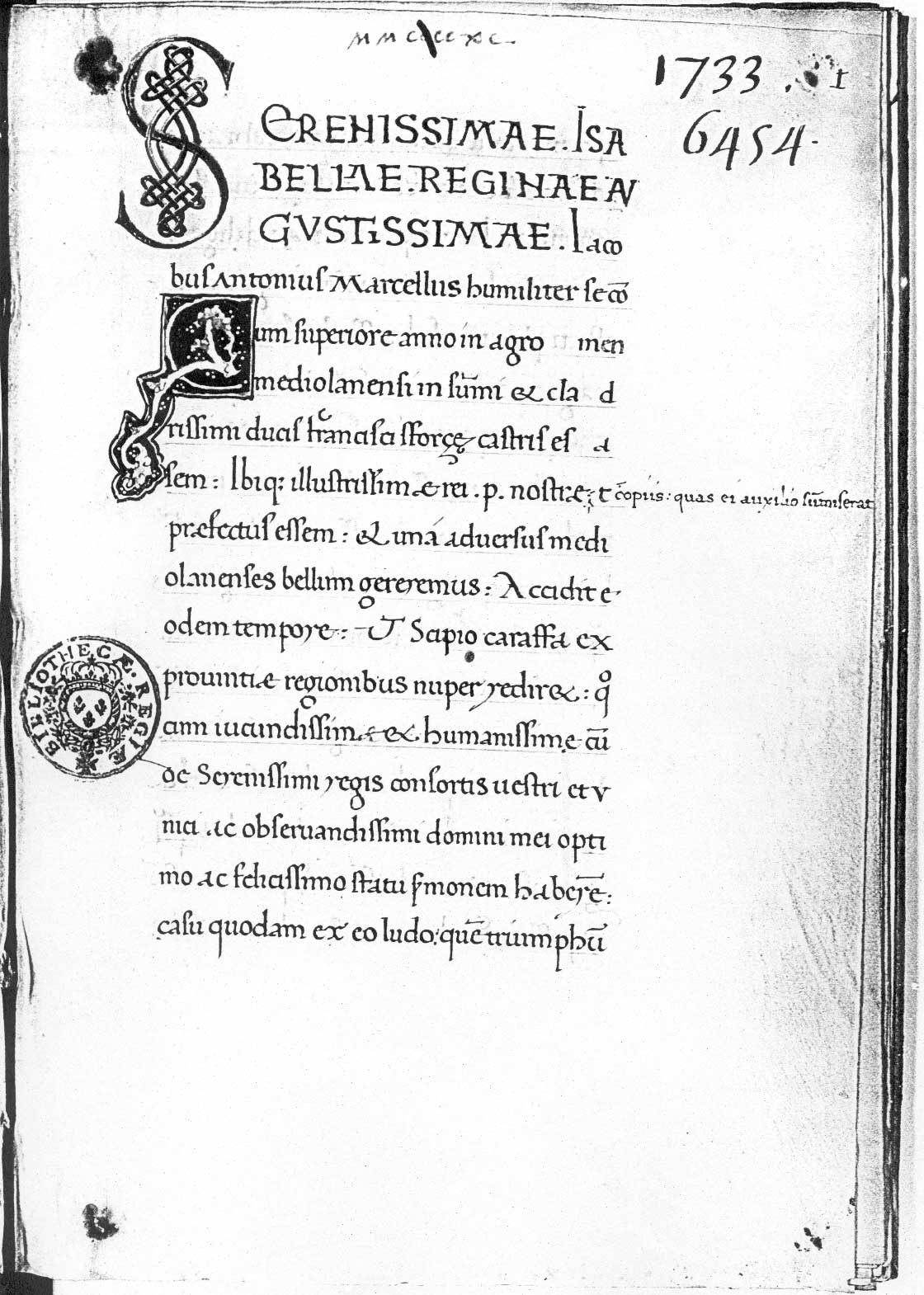 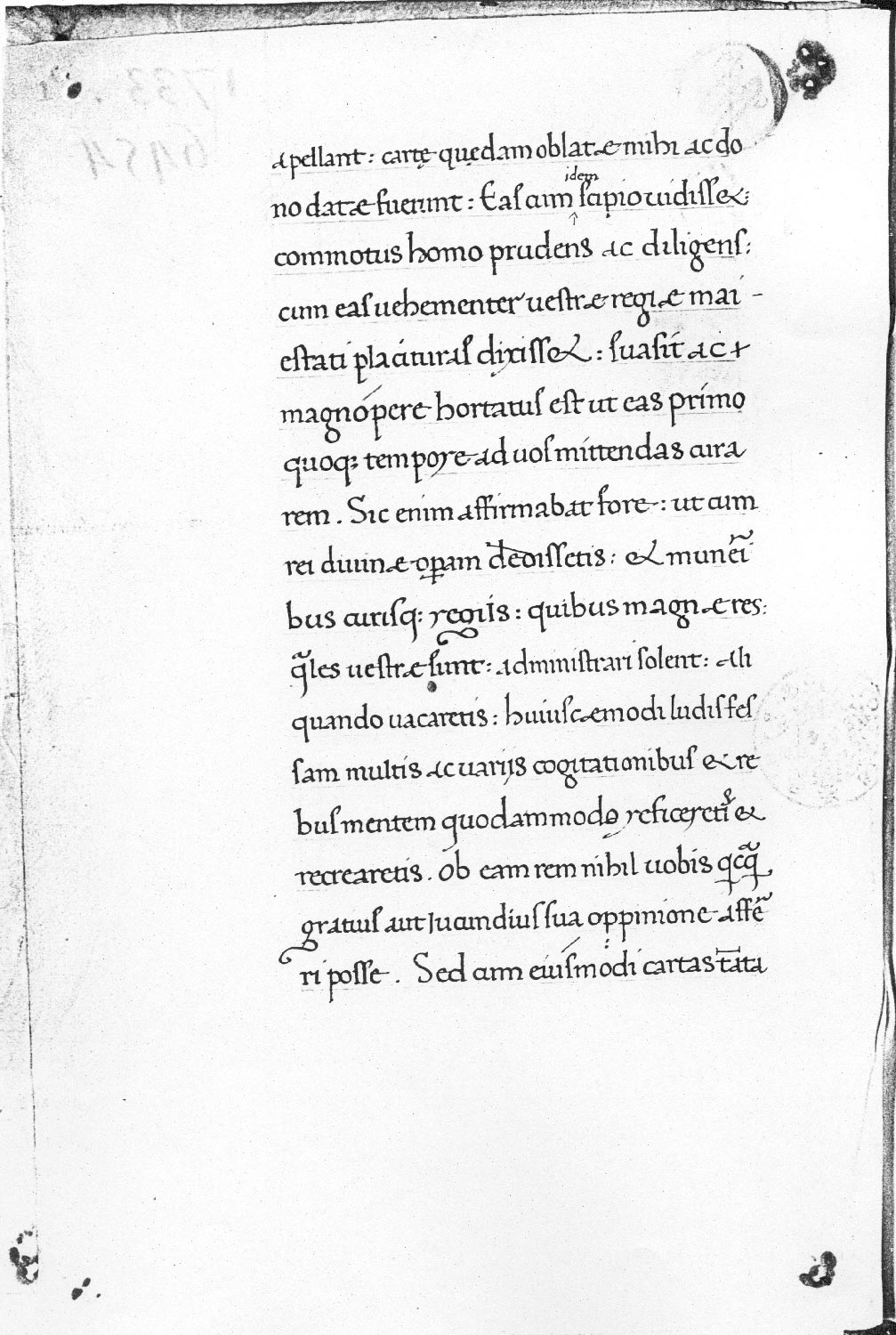 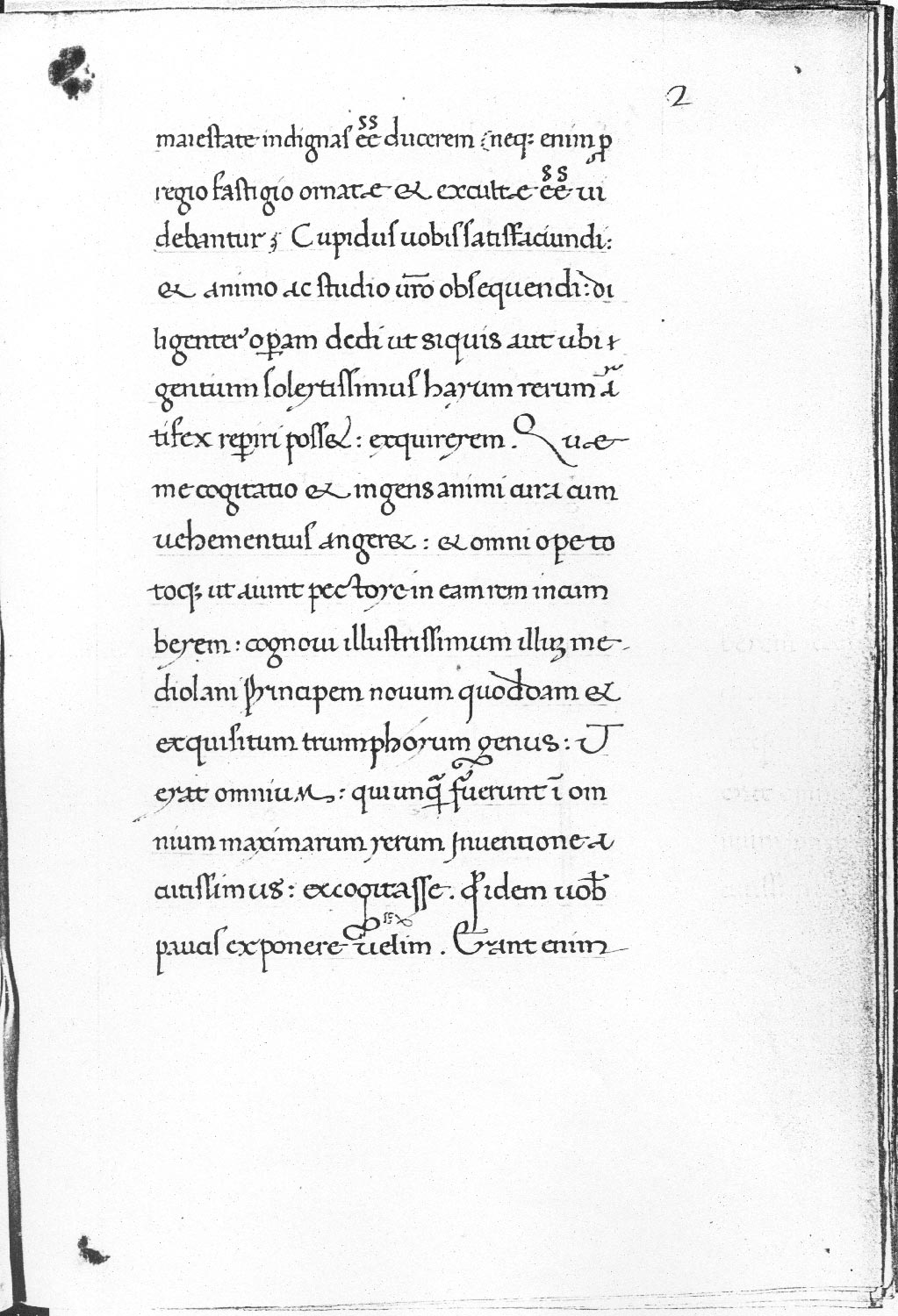 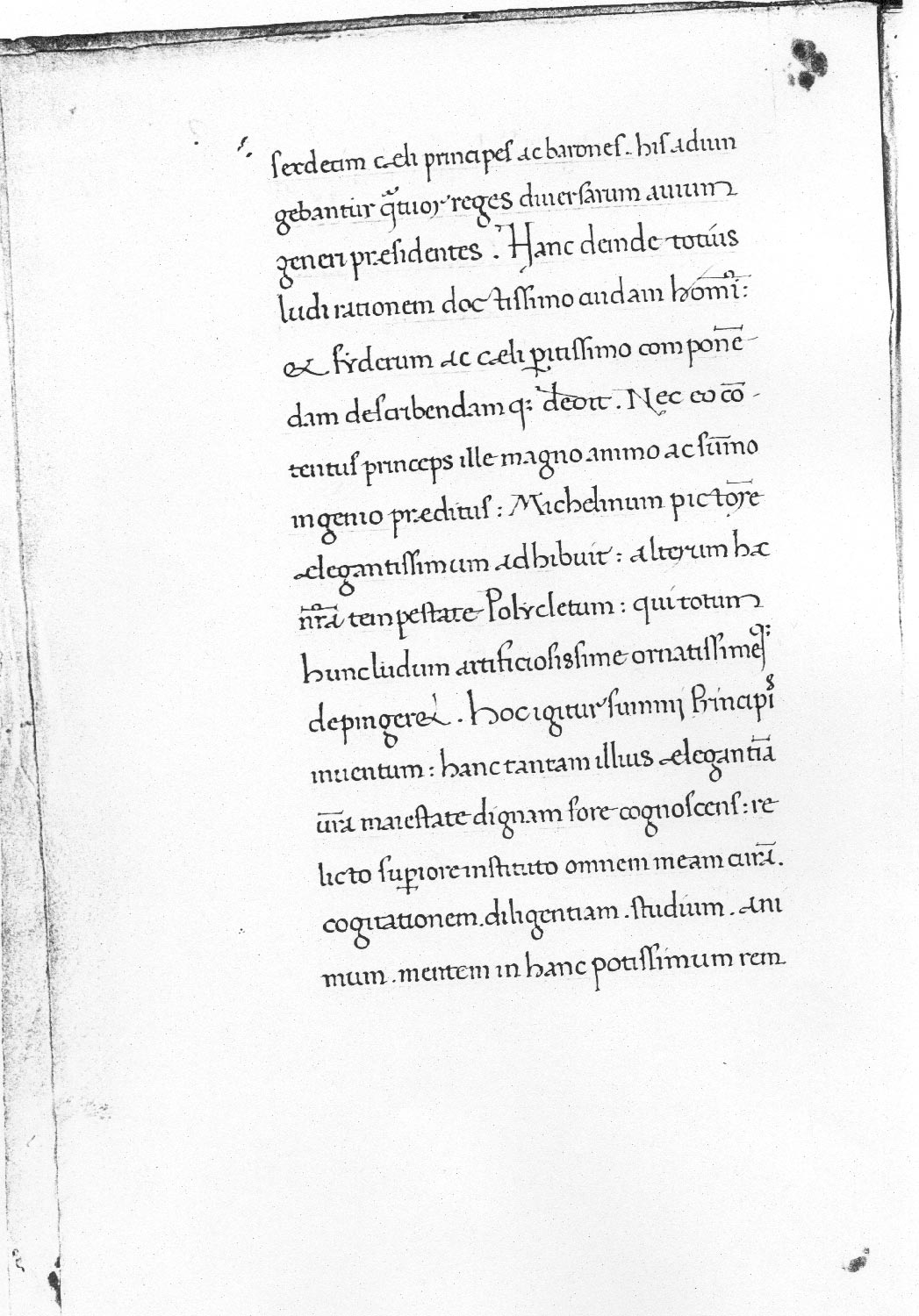 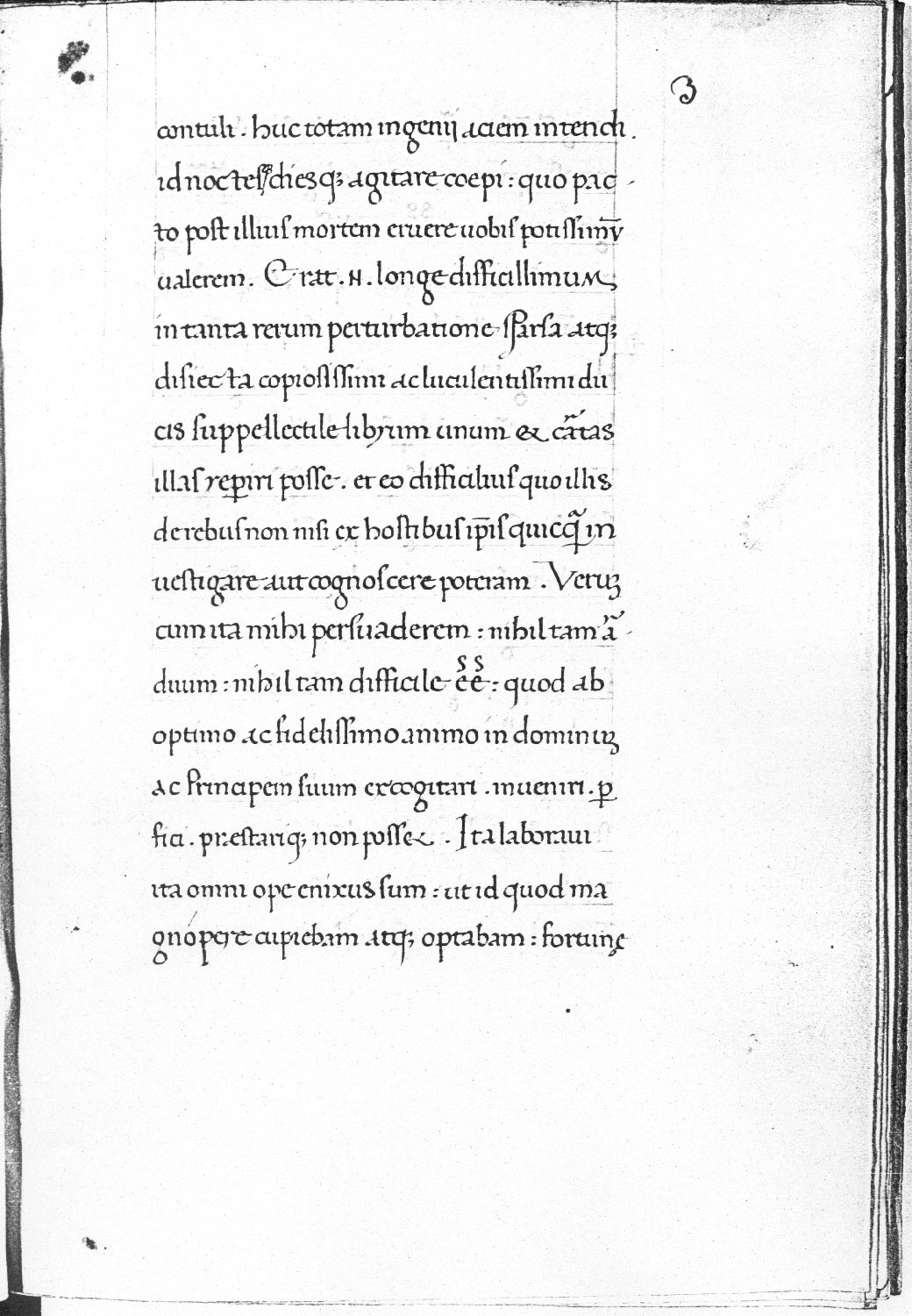 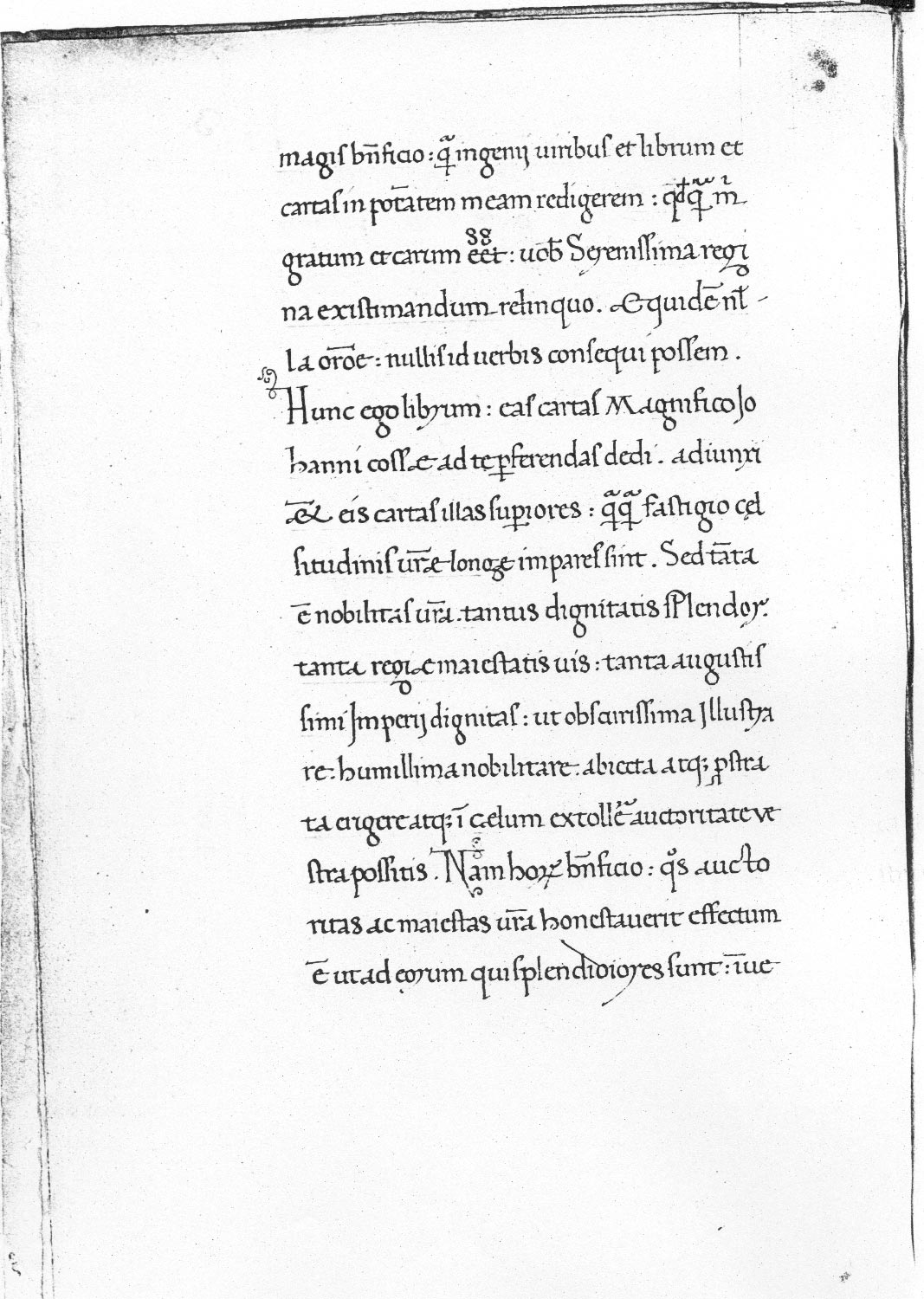 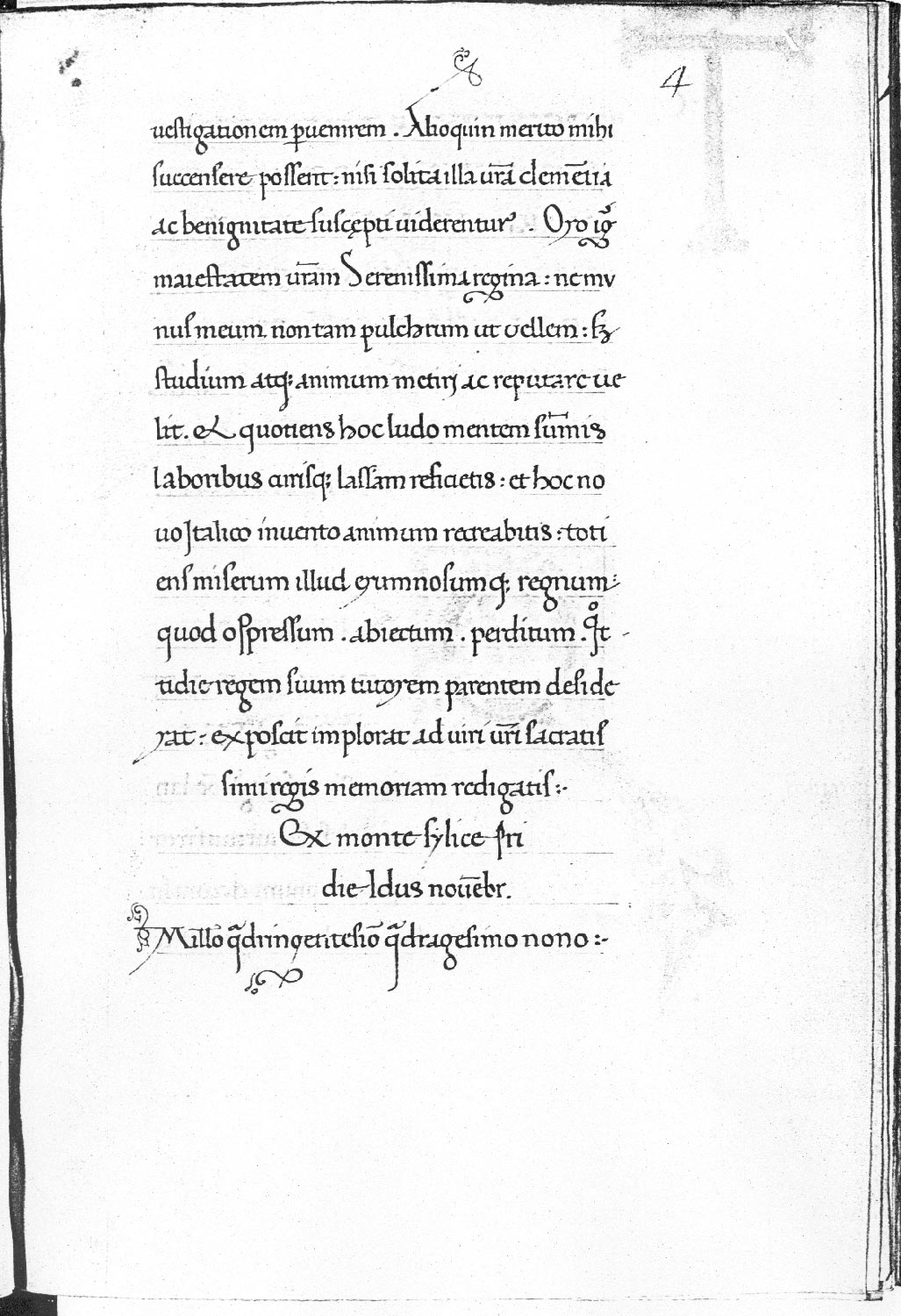 TO THE MOST SERENE AND NOBLE QUEEN ISABELLE,
Jacopo Antonio Marcello humbly commends himself.

Last year in the territory of Milan, when I was in the camp of the highest and most celebrated leader Francesco Sforza, I was in charge of the troops of our most illustrious republic, which he had sent as reinforcements while we were waging war together against Milan. At that time it happened that Scipio Caraffa had just returned from the region of Provence. While I was most pleasantly and courteously discussing with him about the best and happiest condition of the most serene king, your consort and my only and very observant lord, by some chance, certain cards of this game which is called "Triumph" had been offered and given to me as a present. When Scipio saw them, being a thoughtful and diligent man, he said earnestly that your Majesty would be very much pleased by them: and he urged exceedingly and immediately that they should be sent to you at the first opportunity. Thus indeed he affirmed that, after you have given your attention to religion and to the royal duties and concerns (by which great things, such as yours, are usually managed), you will have some free time. By means of these pastimes, you might restore and revive in some measure your mind, wearied by many and different thoughts. On account of this fact, in his opinion, nothing more pleasant or agreeable could be brought to you. But these particular cards I regarded as unworthy of so great majesty (as indeed they did not seem made and decorated at a kingly level). In the desire of being satisfying to you, and being concerned for your spirit and study, I diligently set to work inquiring into how someone among the class of most highly skilled artisans of these things might be found. With the thought of such an enormous undertaking anguishing me vehemently, while pressing on in that business with all my resources and, as they say, with all my heart, I came to know that the most distinguished, illustrious Prince of Milan had thought out a certain new and exquisite sort of triumphs, being, as he was of everything, at one time the keenest in the invention of all the greatest things. I would briefly explain them now to you. They were indeed sixteen celestial princes and barons, to which were added four kings presiding over different kinds of birds. Afterward he gave the plan of this entire game to someone most learned among men, most expert in both the stars and the heaven, to be set up and described. Nor with this was that Prince content, being provided with a great spirit and highest ingenuity: he summoned Michelino, the finest painter, another Polycletus of our time, that he should paint this entire game with greatest artifice and ornament. Therefore by the highest Prince was this invented: such great elegance as this being worthy to be known by your majesty. Having abandoned my previous intention [of searching for a painter], I exclusively applied to this thing all my care, thought, industry, study, spirit, and mind. To this I exerted all of the keenest ingenuity, this I started to pursue night and day: by which means, after the death of the former prince, I might obtain [the game] for you. Indeed, for a long time it was difficult for one book and deck of cards to be able to be found among the furniture, so much of the riches and splendours of the Duke being scattered as well as destroyed in the disturbance. And even more difficult because I would not have been able to investigate and to know about those things in any way whatsoever, unless I had depended on the enemy himself. Truly, as I myself was persuaded, nothing is so arduous, nothing so difficult, that it should not be able to be thought out, discovered, accomplished and fulfilled, by the best and most faithful soul for his Lord and Prince. Thus I laboured, thus by all means it was striven for, until (the thing I so greatly longed and desired) I had both the book and the cards in my possession, more by good fortune than by the strength of my ingenuity. I leave to you, fairest Queen, to judge how pleasing and precious that was to me.
For my part, by no speech, by no words, would I be able to convey it. This book, these cards I greatly prize, will be carried by Giovanni Cossa to be given to you. Also attached, the cards mentioned above, although they are by far unequal to your Boundless Highness; but the splendour of your dignity, the power of your royal majesty, the dignity of your most august empire is such that by your authority you can light up the most obscure, bring the lowliest to nobility, raise up the abject and prostrated, and extol them in heaven. Indeed, thanks to those [humbler cards] that your authority and majesty will honour, it happened that I carried out the search for those that are more splendid. Otherwise they could deservedly condemn me, unless they will appear to be accepted with your customary mercy and kindness. I beg therefore, your Majesty, Fairest Queen: do not judge and evaluate my gift, [which is] not so beautiful as I wished, but my dedication and my efforts. And as often as you will restore the mind wearied by the highest labours by means of this game, and you will revive your spirit by this new Italian invention, so many times remember to your husband, the most sacred King, this poor kingdom: wretched, ruled by oppression, abject, lost, daily longing, requesting, imploring for its king, its protector and parent.
From Monselice, November 12, 1449.

4 by Phaeded
Ross,
Along with the Visconti Hours that came into Bianca’s possession sometime after her father’s death in August 1447, is it not possible Marziano’s deck came too (i.e., wouldn’t cards have been kept with other bibliophile materials even as they are today, especially as the cards game with a brief manuscript explaining them with rules of play)? A minor detail compared to Marcello’s use of them - but the timing of Marcello’s gift is all important towards understanding the significance of his own commission.

Marcello saw the Marziano deck sometime in November/December 1448 when he rejoined Sforza from Brescia, for these are the only months in 1448 that the Venetians were not incurring loss after loss to Sforza (notably Casalmaggiore and Caravaggio) . So when Marcello writes at the end of 1449 to Rene’s wife that he saw the cards “last year in the field of Milan” it had to have been after the October 1449 Treaty of Rivoltella when Sforza switched sides back to the Venetians who agreed to support him in taking Milan against the Ambrosian Republic. But that new Treaty had started to disintegrate by September 1449 when the proposed peace with Milan and Venice is not to Sforza’s liking and Venice cuts off its funds and orders Colleoni to withdraw with the Venetian troops. Good friend Marcello must have known exactly where Sforza was headed (breaking with Venice) by November when he wrote to Rene’s wife. Sforza’s siege of Milan begins in earnest in December.

So why was Marcello commissioning a Marziano deck for King Rene’s wife at this moment? Surely a token of foreign relations to keep Rene neutral as both he and Sforza had just been enrolled in his Order of the Crescent and thus might have seen himself – as the representative of Venice – on an equal footing with Sforza, but now Marcello was required to do only Venice's bidding.

The trionfi-like illumination – oddly having the general aspects of a playing card – that Marcello subsequently sent to King Rene in 1453 (an illuminated page within his commissioned life of St. Maurice, patron saint of Rene’s new order) was to keep Rene, once again, from joining Sforza against Venice. This image has received little attention, as far as I am aware, in regard to the milieu that produced the PMB. Without proposing my own take on this item at this time, just posting scans of the image (could not find it on-line) and Margaret King’s text that describes it in detail (The Death of the Child Valerio Marcello, 1994):
Marcello King text_Page_1.jpg Not downloaded yet 750.66 KiB
Marcello to Cossa-Rene.jpg Not downloaded yet 1008.17 KiB
Marcello King text_Page_2.jpg Not downloaded yet 730.42 KiB
9/8/14 Edit - a color scan of the Marcello image:
Marcello Bibliothèque de l’Arsenal, Ms-940 réserve, f. 39r. Passio Mauritii et sotiorum ejus. 15th century.jpg Not downloaded yet 68.35 KiB