Huck wrote:maybe this is of interest: I saw the remark (I don't know about the "where" in the moment), that Dante had his lover Beatrice on a triumphal chariot and this would be the first appearance. I remember no remark about any connected early pictures, but later there is at least one.

Here's a Giotto picture in San Francesco of Assissi context " "Legend of St. Francis: 8. Vision of the Flaming Chariot"...

A few years ago I began a series of posts on triumphalism, from ancient times to the 17th century, with particular emphasis on the use of a chariot as one symbol of triumph. Only two of the five essays got posted, but you might find something interesting in them. Here was the outline of the series, which includes pointers to other sources of interest.


I'm going to discuss triumphalism and related iconographic motifs in five posts, although the division is naturally somewhat arbitrary. For example, Helios in his chariot continued to be depicted in the Middle Ages as a holdover from ancient times; but it was also a precursor of the Renaissance fondness of the quadriga and a cognate for medieval images of Elijah's fiery translation. This first post will deal with ancient Roman triumphs a bit, with quotes from Margaret Ann Zaho's Imago Triumphalis. The second post will examine the transmission and transition of triumphal motifs in medieval Christian works beginning with Prudentius' Psychomachia, the most prominent early Christian example outside of the Bible (which I'm largely ignoring). It will continue through Pope Innocent III, Dante, and Giotto in the early 14th Century. Petrarch's Triumphs: Allegory and Spectacle, edited by Konrad Eisenbichler and Amilcare A. Iannucci will be the source for much of that. The third post will talk about the revival of triumphalism in the later 14th Century as allegory (i.e., Triumph of Death frescoes), as homage (i.e., Cola di Rienzi's 1354 entry into Rome), and as literary devices in Boccaccio and Petrarch. This too will rely largely on Petrarch's Triumphs. The fourth post will present some material on Renaissance triumphalism in Italy, the fashion for trionfi in the 15th and 16th centuries. This will draw mainly from Imago Triumphalis but also including comments and images regarding Durer and Mantegna. The fifth post will show some images of 17th-century German pageant wagons which illustrate how allegorical figures in such a procession might have appeared at the time Tarot was invented. Those images are from Triumphal Shews: Tournaments at German-speaking Courts in their European Context 1560-1730, by Helen Watanabe-O'Kelly.

The first one should also have included at least one picture of an ancient coin with Nike and a charioteer driving a biga or quadriga.

P.S. Here are a few more early triumphal pics, two of them from manuscripts of Petrarch. (Thanks to Ross for pointing out the article from which they were copied: Triumphal Processions in Italian Renaissance Book Illumination, and Further Sources for Andrea Mantegna’s Triumphs of Caesar, 2008, by Lilian Armstrong.) 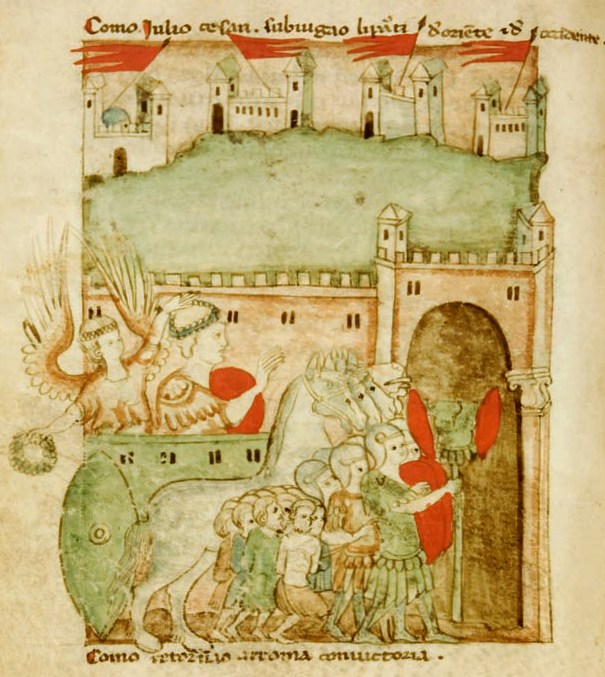 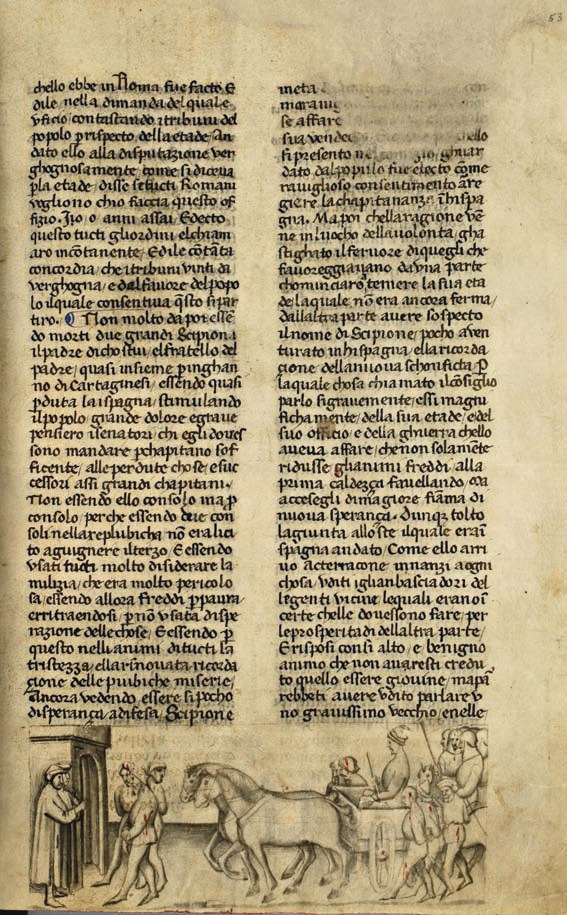 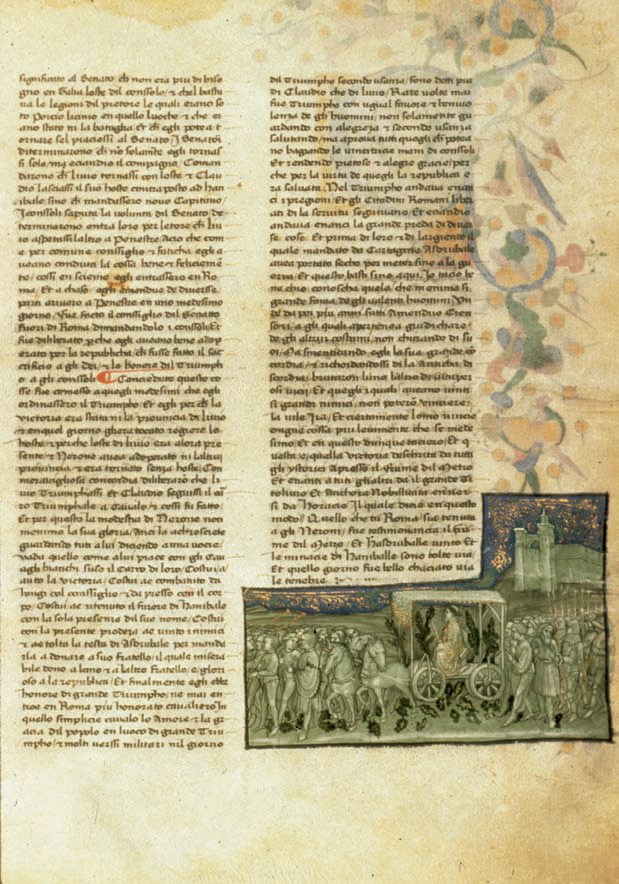 We are either dwarfs standing on the shoulders of giants, or we are just dwarfs.
mikeh
mikeh

Michael, do you know of other Trionfi editions "before 1441" beside those, which we have already mentioned (fragments in 1439, 1414 and one "first quarter in 15th century", possibly the not confirmed version in 1418 in Medici hands)?

In his reply, Michael said he didn't know of any, but he gave a list of authors he's referenced over the years. Since I didn't know much about this area, I thought I'd start reading, and keep my eye out for answers to Huck's question.

Some book or other, however, probably one of those Michael mentioned, spoke of a series, "Petrarch Manuscripts in..." and then you name a country. So I ordered Petrarch Manuscripts in the British Isles, by Nicholas Webb, 1975. After a few weeks, it came today, so I took a look. It's a 500 page book, but it has a good index I found what look like descriptions of seven manuscripts of the Trionfi in Italy before 1441. Perhaps others can check and see if I'm right. Since I've probably made typographical errors, I'll scan the pages before I check the book back in.

ORIGIN. Italian. Except for ff. 167ff-180r, written in a different humanistic cursive script, the text was copied by a scribe who signed f. 1r: "M-CCCC-XXXI a dì III Zenarro in Gaffa in prixone in una tore". (Footnote: Dr. Andre Watson tells me that Caffa is Feodosiya in the Crimea, where there are still the ruins of a Genoese tower; cf. Enciclopedia Italiana, VIIII 255-56.)

OWNERS. A few annotations, mostly later. In the bottom margin of f. 1r, a coat of arms has been sketched in: three tower gules; [footnote: the field, which is circular, is untinctured; the towers stand on mounds, and each has a coat of arms above its door, apparently argent, a cross gules]. to the right is drawn the lion of St. Mark with its paw on an open book. Bought by the British Museum from the bookseller Thomas Rodd, 9 January 1847.

Nice. The Genoese supposedly brought the Black Death from around there, the north shore of the Black Sea. A good place to send a budding Ovid.

So we don't really know when the Trionfi were added, but given the early date for the Rime, I'd guess before 1441. Webb also describes the historiated inital V on f. 1r, showing "Petrarch, reading, and Laura beside a laurel tree, holding a wreath." Lots of color and conventional foliage on the Rime. "Trionfi initials left blank."

ORIGIN: Italian; unsteady semi-humanistic script; the date MCCCCXXVI appears at the end of the Life of Petrarch, f. 134v.

OWNERS. Several members of the Minoccio family of Sienna in the XVth and XVth c. ..bought by Sir Thomas Phillipps from the bookseller Thomas Thorpe in 1836.

There is also a description of the lettering: "Red and blue pen initials alternating; red paragrph signs (later, red and blue alternating); in the Trionfi[/i], red and blue calligraphic initials; Rime numbered in ink. "

OWNERS. Bought by Sir Thomas Phillipps at the sale of Count Guglielmo Libri's books in 1864; offered for sale in the Phillips sale in June 1919, but remained in the hands ofthe Robinson Trust until 1972; now Florence, Bibl. Laurenziana, Acq. e Doni, 688.

ORIGIN. Italian; semi-humanistic script. The manuscript is palimpsest, written over various XIVth-c. Latin and Italian texts. (Footnote: Including some accounts and Latin verse. The Table is written over a devotional text.)

OWNERS. The emblem of an owner or notary, f. 1r, with the initials P.I.T.; (3) Matteo Luigi Canonici; his brother Giuseppe; Giovanni Perissinotti; acquired by the Bodleian Library in 1817. (Footnote: many annotations in S XV-SVIth-c. and later hands, including a large nunmber of numerical references in the Rime, perhaps cross-references to another ms.

Webb No. 193. Bodleian Library, Canonici Ital. 80. Paper, (watermarks caught in spine, unidentifiable), XVth c. (1431). Trionfi in 16 sections. (I don't know, but there may be different versions of the Triumph of Fame.) Then a Table, followed by Epytaphim Petrarce, a biographical note, and extracts from the Rime. Webb:

OWNERS. Not known before Iacopo Soranzo; Matteo Luigi Canonici; his brother Giuseppe; Giovanni Perissinotti; acquired by the Bodleian Library in 1817.

f. 44r is immediately after the end of the Trionfi, at the Table. The reference to Paecht and Alexander, Illuminated Manuscripts..., II, 47 no. 457, pl. XLV, might be worth a look.

I have mostly omitted descriptions of the illuminations, except where there was an actual depiction of something. Mostly it's just different colored inks.

So the Trionfi are clearly in Florence and environs, although not nearly in the quantity we see after 1440. The other significant place is Venice.

Next I'll request the volume in the series on the United States. I'm not sure I can get the rest, for France, Switzerland, Germany, and who knows where else.

83 by Phaeded
On the subject of Petrarch and triumphs, any chance he viewed the triumphal Visconti frescoes at their castle on Lago Maggiore at Angera (which Filippo used in his title as count of Angera, MARIA PHILIPPVS ANGLVS DVX)? The chariots for the planets, at least the sun and moon's, hover over terrerstrial events, somewhat suggestive of his Trionfi themes (at least in terms of Time rules over our fame).

The fresco would have likely been painted some 50 years before Petrarch saw them when he went to Milan and worked for archbishop Giovanni Visconti; the frescoes were painted for Ottone Visconti, c. 1280, to celebrate his triumphal entry into Milan over the delle Torre. My own cruddy pictures of Angera from 2 years ago:
Italy, April 2010 126.JPG Saturn over Ottone's entry into Milan Not downloaded yet 2.5 MiB
Italy, April 2010 114.JPG Angera, Sun and Moon Not downloaded yet 1.62 MiB

84 by Ross G. R. Caldwell
Thanks for taking the time to extract those references, Mike. This is very good - now we're getting somewhere.

In addition to noting Florence and Venice as copying centers of the text, there seems to be an increase in the number beginning in the 1420s. These seven are probably too few to be used to draw firm chronological conclusions, but we could test this tendency when we get other such lists -

It definitely "takes off" in the mid-1420s. When you say these are "not nearly in the quantity we see after 1440", can you give a rough estimate for those after that date found in Webb?

85 by mikeh
Short answer: I count 63 here including 2 with just short fragments. So about 90% are after 1440 (assuming I lost count and missed a couple of those listed below).

86 by mikeh
Here is the most recent list I can find of the various books detailing Petrarch manuscripts, from which the information about Trionfi manuscripts can be extracted. This is on p. 2 of J. B. Trapp's Studies of Petrarch and his Influence, 2004, a book that Michael had mentioned.