51 by mikeh
Sorry for the late reply. I had some things to take care of.

I have two editions of the "Julia Orsini". One is an undated book that also contains black and white images of the cards, an engraving of Mlle. Orsini, etc. The other, in both French and English, is part of the LWB to Dusserre's edition of the Grand Etteilla III, which I only know is "Julia Orsini" because it is very close but not identical to the book. I assume it is later than the book. It seems to be the version that Waite had, judging by his word-lists. Perhaps he did the translation reproduced by Dusserre. Tell me which it is that you need. I can give samples of the different wordings in the two editions if you wish.

Your second post after mine deals with card 61, is about the number symbolism, something I am definitely interested in. Where does this quote from Etteilla come from? I do not recognize it. Also, do we know what keywords were on the original card? The card you have a picture of is an English translation..

In the 3rd Cahier Etteilla writes of card 61, upright (from http://www.tarotforum.net/showthread.php?t=180963):

"Bewilderment" is an acceptable translation of "Egarement". "Estrangement" is of course not a translation of "Religieuse" but rather of "Eloignment" (a better translation would be "Separation" or "Removal"), the keyword that appears on the 19th century French versions of the card (Grand Etteilla I, II, III). It would seem that "Religieuse", surely referring to a cloistered nun, was too specific.

The versions of the Grand Etteilla I that I have seen invariably have a sunburst on card 1; hence they are by way of D'Odoucet. I do not know if Depaulis's deck has this card, to verify what was on the original card. It is not pictured in Wicked Pack. For the 3 of Swords, the text of Wicked Pack has "Separation" only (p. 94), not bothering with the Reversed. They do not say where they get this, whether from Depaulis's deck or some other source. 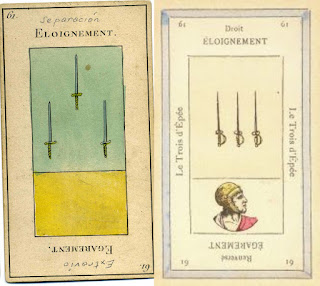 My hypothesis about the keywords is that they are related to the Sola-Busca version of the card, the heart stabbed by three swords with a wreath underneath, which in turn is related to 14th-15th century paintings of St. Augustine's vision of the Trinity, which showed three shafts of light directed at Augustine's heart, emanating from a vision, sometimes of three heads, sometimes a vision of Jesus on a cross (thus meeting the Franciscan competition). See my blog post at http://neopythagoreanisminthetrot.blogs ... hrees.html.

I tend to think the keywords are an underground historical product spanning three centuries and have nothing to do with Etteilla's or his followers' feeble ad hoc explanations. However I am willing to give them a try.
SteveM
SteveM

This has now been digitized and is viewable online here:

53 by mikeh
Wonderful, Steve. And good to hear from you. (I have myself been avoidingreading THF for a week or two, so that I can finish some other projects.) I have been wanting to see that card with "citoyen" on it for a while. As usual, they have not updated their bibliographic information. The best discussion is in Decker, Depaulis and Dummett, 1996, who say "last years of the 18th century" for it and correctly do not attribute it with certainty to Saint-Sauveur, only with high probability, giving their very good reasons. See DDD p. 274, note 62, and p. 275, note 65, which, somewhat confusedly, has a little more. I attach these pages as well as the pages that these are notes to, p. 96 and 98 (although they do not say what particularly applies to the BM's images).