"Hisler" is likely to have been a nickname, a humorous one. In the prophetic Centuries by the seer Nostradamus (1503-1506), Germany someday would fall under the sway of a man named Hisler.

I cannot verify this particular prediction of Nostradamus, other than to observe that if true he was only off by one letter, very close to it in the alphabet.

Beasts wild with hunger shall cross the rivers:
Most of the fighting shall be close by the Hister [Danube],
It shall result in the great one being dragged in an iron cage,
While the German shall be watching over the infant Rhine.

13 by mikeh
Thanks, Ross. I don't know how you find these obscure things so quickly!
Added later: Well, a little googling and I perhaps see that it's not so hard. But are you sure that "Hisler" isn't in there somewhere? Well, I see the book is online. So I'll check.
Added later. Well, I searched all of http://www.sacred-texts.com/nos/. No Hisler.

mikeh wrote:Thanks, Ross. I don't know how you find these obscure things so quickly!
Added later: Well, a little googling and I perhaps see that it's not so hard. But are you sure that "Hisler" isn't in there somewhere? Well, I see the book is online. So I'll check.
Added later. Well, I searched all of http://www.sacred-texts.com/nos/. No Hisler.

I'm an old hand at occultism, that's all. I know all the perennially hot topics, and Nostradamus' "Hister" is one of them. I'm surprised that Decker got it wrong.

15 by Huck
Considering the Habsburg-French war (contemporary to Nostradamus' times) the Hister (= Danube) interpretation makes perfect sense.
Nonetheless the original likely was handwritten (printed after Nostradamus' death ?) and perhaps an early error about an "l" or "t" caused the trouble about "Hisler" and "Hister".
Huck
http://trionfi.com
mikeh
mikeh

16 by mikeh
Ronald Decker's new book, The Esoteric Tarot (2013), has three chapters on Etteilla and his followers. Much of the information about the followers can be arranged as a time-line. I include information on Etteilla only as it directly relates to his followers. I give the page number in Decker's book as well as his source, when given. I have not checked the accuracy of his information, but it is consistent with what I remember from other sources.

1788. Claude Hugand, a Lyons native, joins the Temple of the Sun; also joins Etteilla's group, Society of the Interpreters, founded that year. (Decker p. 191, from Amadou; on membership of the Society, Thierry Depaulis in Wicked Pack of Cards pp. 100-112.)

1789. In Lyons Hugand writes a pamphlet Faites Mieux, J'y Consens, ou les Instructions d'Isis Divulguées par un Electeur de la Commune de Lyon, en l'Année 1789 (Do Better, I Agree, or the Instructions of Isis Revealed by a Voter of the Commune of Lyons, in the Year 1789). (Decker p. 191. For a translation and discussion of some of this pamphlet, see my post at http://www.tarotforum.net/showpost.php? ... tcount=251.)

1789. Etteilla in an advertisement of his work mentions that lessons are available from d'Odoucet as well as from himself. (Decker p. 192.)

1790. De la Salette joins the Temple of the Sun. Reveals its existence to Etteilla, for which he is reprimanded for breaking the vow of secrecy. (Decker p. 192, Amadou 26ff.)

1790. D'Odoucet publishes Revolution Francaise in Paris, which contains a footnote critical of Etteilla and Hugand, although not mentioning their names. Etteilla is judged a neglectful husband and father, as well as a charlatan. Hugand is declared unskilled. (Decker p. 197, from Wicked Pack of Cards pp. 103-104.)

1790, summer. Etteilla founds the Nouvelle Ecole de Magie (New School of Magic). In the Apperçu sur La Nouvelle Ecole de Magie (Prospectus on the New School of Magic), he calls d'Odoucet "Dodo", which Decker says is equivalent to the infantile "goo goo" in English and not the name of the famously stupid bird. Adds that d'Odoucet is "ungrateful" and "despising in tone". (Decker p. 196.)

1790. De Bonrecueille, Hugand, and de la Salette have all begun to compile interpretations of individual cards. De Bonrecueille writes de la Salette: "Brother Hugand has indeed received your epistle on the synonyms of the Book of Thoth, but according to the announcement made by Monsieur Etteilla, we had presumed that you had composed something more complete about it." (Decker p. 197, from Amadou, p. 20.)

1791, February. De Bonrecueille writes to Etteilla, "You will find here enclosed the manuscript of our estimable competitor Monsieur de la Salette. There are many synonyms [for individual Tarot cards] whose fortunate conjunctions I have admired. However, there are many others that I do not think are at their natural places. Either he is wrong or I am; but it is true that the work is very helpful, and--for fear it would not be printed--I made a copy of it." (Decker p. 213, from Wicked Pack, p. 110.)

March 1792. De Bonreceuille reports that d'Odoucet has seized Etteilla's private papers and is usurping Etteilla's role. He is also selling Etteilla's merchandise, as evidenced by the 40 cards of the original first edition of Etteilla's Tarot that Thierry Depaulis owns, where on the Eight of Batons, Etteilla has obliterated the engraving and used a pen to insert his own name and address. (Decker p. 199, from Wicked Pack, p. 91.)

1792. Hugand moves to Paris and collaborates with d'Odoucet until 1794, running a small press with him. Hugand, like Etteilla, is a supporter of the Revolution. D'Odoucet is a Royalist. (Decker p. 199.)

1794. Hugand, under the name Jéjalel, publishes his Course Complet: Théorique et Pratique du Livre de Thot; no further information about Hugand after this publication (Decker p. 199). The book extends Etteilla's Cours Théorique et Pratique and unlike that one "is truly complete' (Decker p. 291 n20), It includes a list of synonyms (Decker p. 244). On p. 6 Hugand mentions that the Alexis from whom Etteilla learned about the Egyptian tarot was a "descendant" of the famous "Alexis Piémontese" (Decker, p. 191; his real name, Decker says, following Depaulis, Wicked Pack p. 272 n16, was Girolomo Ruscelli, 1520-1566). Hugand also says (p. 72 of his book) that the name Jéjalel is from a Table of the 72 Cabalist Angels in the Zodiacus Vitae of Palingenius, where it is number 40; this is in contrast to its usual number, Decker says (p. 215), which is 58; I myself have found no such Table in either the French or the Latin editions of Palingenius that appear online. For more on this book see the thread "Palingenio's Zodiacus Vita, 1535 Venice" at viewtopic.php?f=11&t=854)

1804 and after. D'Odoucet publishes the 3 volume Science des Signes: Médecine de l''Esprit (Science of Signs: Medicine for the Mind). Vol. 1 draws on Etteilla's Cours Theorique et Pratique. Vol. 2 condenses the Dictionnaire Synonimique. Vol. 3 does not include the tarot but discusses other matters occult and Masonic. Disappears from history in 1808 when the Prefect at Lille orders a warrant for his arrest. (Decker pp. 199-200.)

I attempt to create a better overview about themes, which have used various threads.

In this thread once I found (December 2015) a Petit Etteilla deck in British Museum:
http://tarotforum.net/showpost.php?p=45 ... tcount=356

appeared in the context 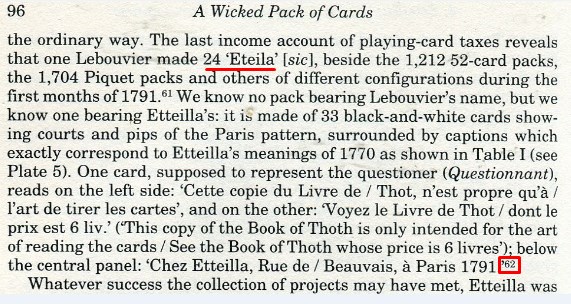 DDD wrote "1793 ?" in relation to the use of "citoyen" for St. Sauveur, but we found examples, that St. Sauveur was addressed as citoyen at least till 1798, so this evaluation doesn't count much.

1796a. Saint-Sauveur publishes Europe. Tome I, per announcement at http://a-tarot.eu/p/2012/tarots/sauveur-5.jpg . The address of the author is given as “rue Nicaise, maison de la section des Tuileries”. 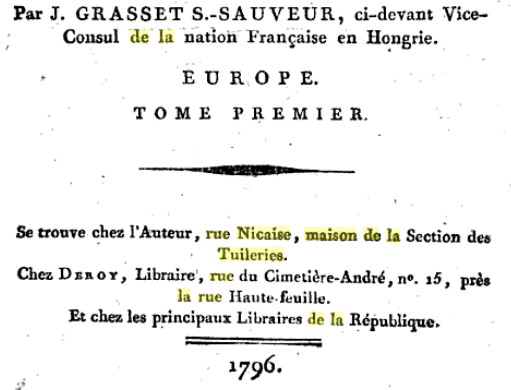 https://books.google.de/books?id=UuJaAAAAQAAJ (IV 1795 in other source)
... gives Deroy as publisher, but doesn't give the author address. I saw a cooperation between Sauveur and Deroy already indicated for a work in 1794.


MikeH ...
In the same year is his Encylopedia des Voyages, at https://books.google.co.uk/books?id=...auveur&f=false , at the same address, published by Deroy. It seems to be just about Asia.

1796b. L’Art de Tirer les Cartes, ou le Moyen de Lire dans l’Avenir (The art of reading the cards, or the means of reading into the future), with a treatise on interpreting dreams, and accompanied by a “jeu de cartes” (deck of cards), described in a 1796 review at https://books.google.co.uk/books/conten ... 068&edge=0. 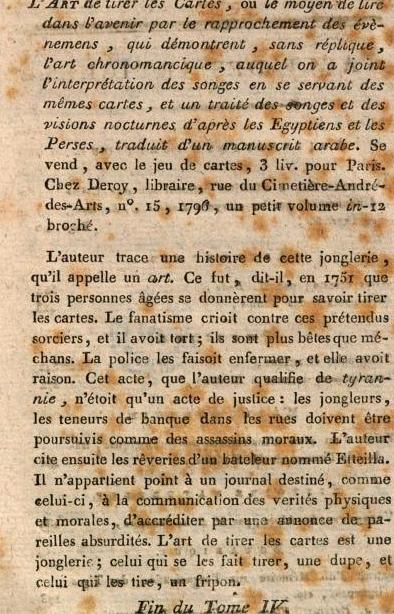 The referring book ...
Revue encyclopédique: ou Analyse raisonnée des productions les plus remarquables dans la littérature, les sciences et les arts
Revue encyclopédique, 1796
https://books.google.de/books?id=XXO2K0 ... navlinks_s
... has an an interest redactor, Aubin L. Millin, author of many volumes of a competent Dictionnaire des beaux-arts ...
http://digi.ub.uni-heidelberg.de/diglit/millin1806bd2
It's interesting to observe, that this review got the last page in a work of 596 pages.

I detected the dictionary of 1806 recently, when I researched details of the Rothschild Tarocchi. Perhaps one may conclude, that the review was written by Millin himself?

According to Depaulis (personal communication to Kwaw of 24 Dec. 2015) it is the same as the booklet published in 1791, except that the spelling “cartonomancie” has been changed to “cartomancie”. It is for use with a Petit Etteilla deck. No author given. Published by Deroy, at the address “librarie, rue du Cimitiere-Andre-des-Arts, no. 15”. The content as described in the review corresponds to that of the LWB that accompanies the current Petit Etteilla published by France Cartes.

The first edition of Le Petit Oracle des Dames / Petit Etteilla was published in 1797 as:

Deroy seems to have taken over Grasset de Saint-Sauveur's publications. He remained Grasset's main publisher, but died in 1801.
His stock was dispersed; Gueffier clearly bought the rights for Le Petit Oracle des Dames.
As a consequence:
(here quoting the summarised timeline above that I sent to him)
1801, 13 April – Le Petit Oracle des Dames (chez boulevard Cerutti, No.21 (Gueffier) the rights of which are later (Mutations des Fonds - February
1823) acquired by M. Peytieux, libraire, passage du Caire, n.121, à Paris, from Gueffier jeune).

Gueffier jeune (i.e. Pierre-Charles-Augustin Gueffier, d. 1803/4), was succeeded by his widow, the Veuve Gueffier, who died in 1809 (a probate inventory is in our Archives Nationales), then by their son Gueffier jeune no. 2 (or Gueffier fils), who bought the remaining stock of Etteilla's books in 1817, as your rightly pointed out, and later (1823) sold Le Petit Oracle des Dames and Le Veritable Etteilla to Philippe-François Peytieux.

I don't know, if it is of interest. DDD mentions it at p. 88 and elsewhere.
Huck
http://trionfi.com
SteveM
SteveM

19 by SteveM
http://gallica.bnf.fr/ark:/12148/btv1b1 ... 20de%20jeu
Immature poets imitate; mature poets steal; bad poets deface what they take, and good poets make it into something better, or at least something different.
T. S. Eliot

I'm wondering about the "1788" date though; none of the text, except for a tiny subscript on the last (information) sheet, uses the medial s (long s). I could be wrong in this, it could be that some French presses started using the normal "s" everywhere already in the 1780s. I'll have to study it a bit more.

Whatever the case, they are old, late 18th century, and probably exactly as Etteilla intended them. It would be good for someone to print a coloured deck based on these - perhaps we could get a crowdfunded or kickstarter campaign going to do it. Etteilla - his cards at least - has a strong and growing following.