1 by Huck
Germini and Ganellini are assumed to be other names for the Minchiate game.
As I recently made some extended studies to the Minchiate Francesi (also called Poilly decks) it became of interest to know a little more about the development of these other names.
With some luck I found the oldest known use of the Germini name ... for the current moment. 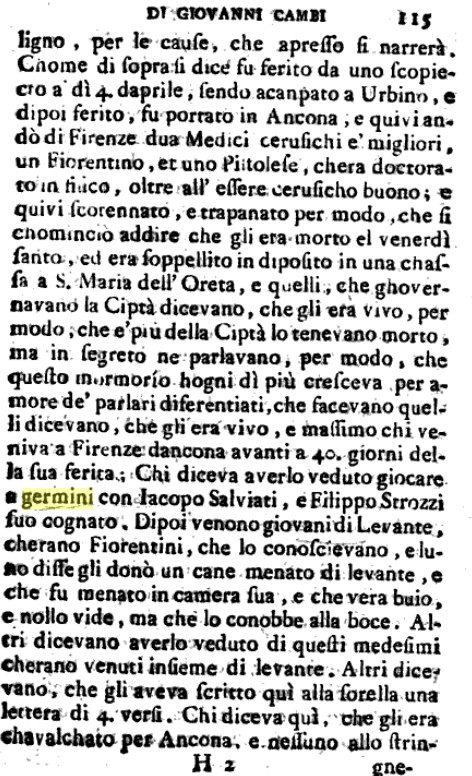 The mentioned Filippo Strozzi is the grandfather of Filippo di Piero Strozzi, from whom I assume, that he participated in the production of the Tarot de Paris in the year 1559. 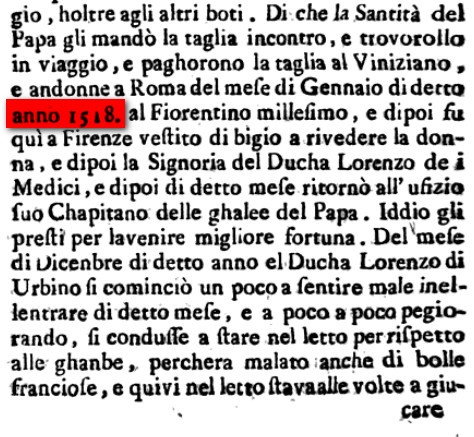 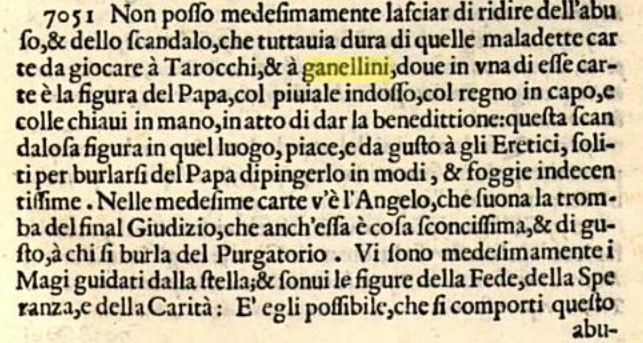 The author Bonifacio Vannozzo (1540-1621) worked as a cardinal's secretary, at least in the 1590's. The cardinal had been then from the Caetani family, actually a great-uncle from Francesco Caetani, duke of Sermoneta, who is said to have introduced the Sicilian Tarocco to Sicily in 1662.

For both texts I've my difficulties to understand fully the circumstances. The passages of Germini might demand, that one studies the original editions to get the context.

About the Germini passages I assume, that they are the oldest momentary known (not counting Minchiate and Sminchiate). Franco Pratesi knew an earlier oldest passage from 1529.

About the Ganellini passage: it's just the oldest, that I found. I've no information about the currently oldest notes ... but I finally found ...


The version of Minchiate played in Genoa presumably continued to be played there until the very early 1930s, when the last packs were manufactured by Solesio. It was probably imported there from Sicily; if so, it was probably known as ‘Gallerini’. Is it possible to find out the rules under which it was played? Can the function of the additional unnumbered trump to be found in some Genoese packs be determined?
[February 2012: Thierry Depaulis comments that Ganellini was played in Genoa as early as 1600 before the game became known in Sicily. Also, tarot cards were made in Palermo as early as 1630, much earlier than Villabianca assumed.]

So my passage isn't the oldest.
Huck
http://trionfi.com

2 by Huck
The Ganellini passage of 1613 was translated by Andrea Vitali with ...


“7051. In the same way I can’t avoid to speak about the abuse and scandal, that however continues to play with those damned cards, Tarot and ganellini, where in one of these cards is the figure of the Pope wearing a cope, with the kingdom on head, and with keys in hand, in the act of giving his blessing. This scandalous figure in that place (in the cards), like and give taste to the heretics, who are used to make fun of the Pope to paint him in different ways and indecent styles. In the same cards there is the Angel who plays the trumpet of the Last Judgement, that is a very indecent thing and of taste for who makes fun of Purgatory. There are likewise the Magi guided by the star and the figures of Faith, Hope and Charity. How can this abuse continue among the Catholics? If those things happen among the Lutherans what we would say? In the game where you curse, where you say a thousand shameful words even against the cards themselves, how is it possible to use such mystery (sacred) figures? I protest with whom I must do, and I apologize that it is not my fault if nothing is done to remedy. I forgot to say that in this card deck used to playing, a Monkey is painted, dressed as a monk, preaching from a pulpit: Oh, my God, what are these? And yet the Princes use them for fun? O great sacrilege!”

Andrea feels not enough safe in the use of English language ... improvements are welcome.
Huck
http://trionfi.com

Franco Pratesi: GERMINI AMONG OTHER GAMES
http://trionfi.com/germini-1517-1519
(Franco could confirm, that the term had been in the earliest documents)

and the Ganellini note (1613) was embedded in Andrea Vitali's article 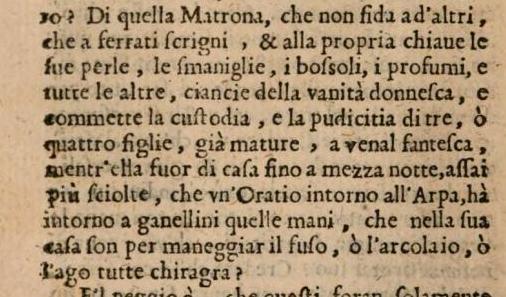 ... contains the word ganellini ... I don't understand the text, possibly this has no relevance to the game
Huck
http://trionfi.com
mikeh
mikeh


and the Ganellini note (1613) was embedded in Andrea Vitali's article

If you click on the British flag at the top of the web-page, you will find my English translation of his essay, which Andrea and I discussed before he posted it. It has been there since 2013. Here is my translation of the passage indicated (with typos. "glues turnkey" shouldn't be there):


7051. I cannot let likewise leave off criticizing the abuse, & the scandal, that however persists of those accursed cards to play Tarot, & ganellini, where in one of these cards is the figure of the Pope, with the crown on his head, with the keys in his hands , and glues turnkey, in the act of giving benediction: this scandalous figure in that place, pleases and is to the taste of the heretics, done to make fun of the Pope painting him in various way and in the most indecent fashions..In the same cards there is the Angel, who plays the trumpet of the last judgment, that too is a most indecent thing, & in the taste of those who joke about Purgatory. There are likewise the Magi guided by the star, & there are the figures of Faith, Hope, and Charity: Is it possible that this abuse is put together among Catholics? If these things were done among Lutherans what would we say? In the game where blasphemy is said, and a thousand curse words, also in the same cards, they use figures so sacred? I protest with whoever has need, & I apologize that it exists and is not remedied. It slipped my mind, that in the deck of so-called playing cards is similarly depicted a Bertuccia [Barbary ape] dressed as a monk, put in the pulpit in the act of preaching: O my God, what things are these? & Even Princes use them as a pastime? Ò great sacrilege!" (7).

And the earliest reference so far to "Germini" as a card game and pack is in the article by Franco Pratesi that you cited three days ago, highlighting the "germini" passage.

I have translated the article, with some help from Franco, at http://pratesitranslations.blogspot.com ... on-on.html

As you noted, the document is 1506. But the game is the same as Minchiate, as can be seen by looking at the literary references to the game under both terms, for example for Germini the one at http://www.letarot.it/page.aspx?id=887 (in Italian only, but for translations of a few verses go to "Tarot and Literature I".

It is a matter of transcription.

Run through Google, there are just a few words to look up in an online Italian dictionary, remembering that you can often change an initial "sm" to just "m".

Or you can just read what Andrea said, and together we translated, on the web-page I referred to earlier, http://www.letarot.it/page.aspx?id=310&lng=ENG :

In a satirical passage of Sermon X focusing on womanly "virtue", we find reference to the game of Ganellini:

That Matron, who not to trust others, keeps in iron chests, & with a key to the same, her pearls, bracelets, sweets, perfumes and all the other nonsense of womanly vanity, and commits the custody and shame of three or four daughters, already mature in venal servitude, while she was out of the house until midnight, looser than Orazio on his Harp, having her hands on ganellini, those hands that in her house are for managing the spindle, the spinning wheel, or the needle, everything [that gives the hands] gout. (11).

Actually, there is a mistake. Instead of "shame" I should have said "honor", I think, for "pudicitia". I was having difficulty with that word, and we miscommunicated.

it is the same, also discussed by Vitali, as translated by us:

Among the many tax proposals is also the following: "One could in addition impose on these things, serving to restrain the vices of lust, throat, and play, as on Cuochi [Restaurants], Tavernari [Taverns], Bettolanti [gaming houses], and Camere locande [gambling inns] and on cards and ganellini." (19).

Yes, both are about the game.

7 by Huck
Post 3 (and the title) in this thread is from 2012, so 9 years ago. Post 4 was from today, cause I repeated the search for Ganellini cause of the cards in book-binding, that we discussed. Actually I had prepared to add the sentences ...

But it appears in a work of Andrea Vitali, translated by Michael Howard.

"That Matron, who not to trust others, keeps in iron chests, & with a key to the same, her pearls, bracelets, sweets, perfumes and all the other nonsense of womanly vanity, and commits the custody and shame of three or four daughters, already mature in venal servitude, while she was out of the house until midnight, looser than Orazio on his Harp, having her hands on ganellini, those hands that in her house are for managing the spindle, the spinning wheel, or the needle, everything [that gives the hands] gout "

In the current situation (the book-binding situation in Finale Ligure) it's of interest to determine the first date of the Minchiate-type decks in the region of Genoa .... actually this might be as early as 1506.
Huck
http://trionfi.com