GirolamoZorli wrote:Ah, important, I forgot. I sense a trap. The name of the game. In XVI century we have, from Aretino on, several documents citing Germini. Was the Rosenthal sheet a 96 card Germini pack ? was it called by us Minchiate pack just because we usually take for granted that Minchiate and Germini are the same thing ? in fact, from the middle XVII century on, they were the same thing. Aretino and Cardano (De ludo Aleae, about 1530) do not seem to agree. Even John Florio, in his World of Wordes (1599 or so), says : Germini, a tarot game. Minchiate, a card game.
Interesting. :-s

Nobody else than Franco and us talks about Minchiate in this context, as far I know. It's usually seen as a Tarocchi.
For me it's a "suspicion with reason", that the Rosenthal deck might belong to a very early generation of Minchiate. Usually it's dated c. 1500. But since recently it's clear, that Florence exported great numbers of "Triunfi" decks since at least 1463/64 and this changes the perspective. Before this was very unclear, if mass production started 1460, 1470 or even much later.
With "export from Florence" is said "trade on land" from or via "Florence"

I don't know so much abot the appearances of Germini and Minchiate in 16th century. Generally we (or I) had the focus on 15th century and I'm catching up in this field just a younger time. But these differences interest me. Whatsays this 1552/53 production? Germini or Minchiate?
Huck
http://trionfi.com

32 by GirolamoZorli
Right. I mean the Rosewall sheet. Dummet and Pratesi discuss about a possible Minchiate sheet. If you assume for a second that XV century Minchiate wasn't a tarot game, the Rosenwall sheet and Pratesi's brilliant conjecture could apply for a very early Germini pack.

In 1553 or so, the anonymous I Germini sopra Quaranta meretrice della città di Fiorenza openly explains the Germini deck and never calls it Minchiate deck. One century is needed to see a game called Minchiate clearly played with the Germini pack. First is Lorenzo Lippi (died 1664), than Paolo Minucci (in 1683 or so).

The Tuscan state from 1638 to 1682 put taxes on decks called Germini until 1682. Their first mention to Minchiate decks is dated as late as 1696. Then in 1716 Niccolò Onesti gives us a full explanation of the game and calls it Minchiate only and never Germini. The deck reported by Onesti is the 1553 Germini deck.
And so on. I have written few articles about this puzzling subject. Whenever I see a Minchiate game recalled in XV or XVI century document, I wonder which pack it was played with.

You just gave me a lot of material to dive into. Thank you. I will study it.

What does the number of the registers say? Are these an indication of time?

Yes, of course, but likely the Register numbers (in this case "reg 52") lead to specific dates "from xx.xx.year till yy.yy.year".
Huck
http://trionfi.com

35 by Huck
I got these lists from the Esch text, which should be the major sources: 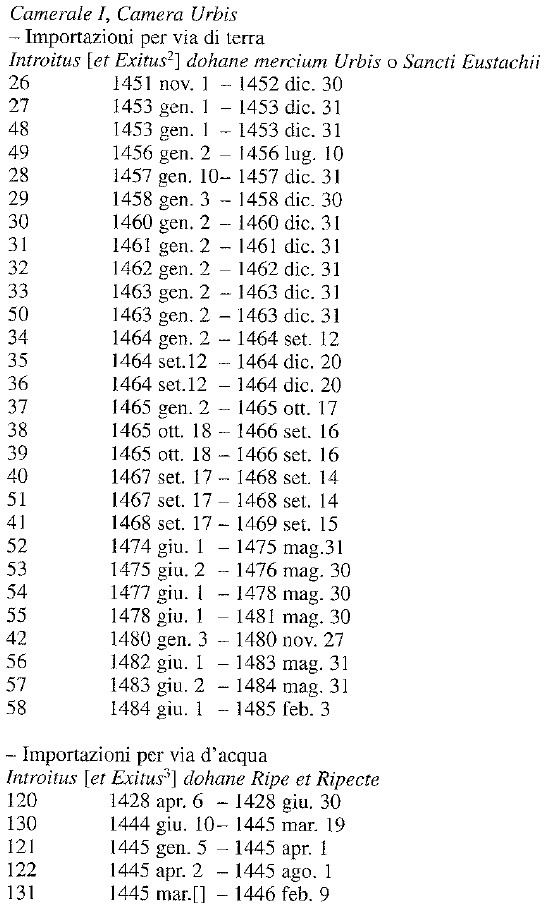 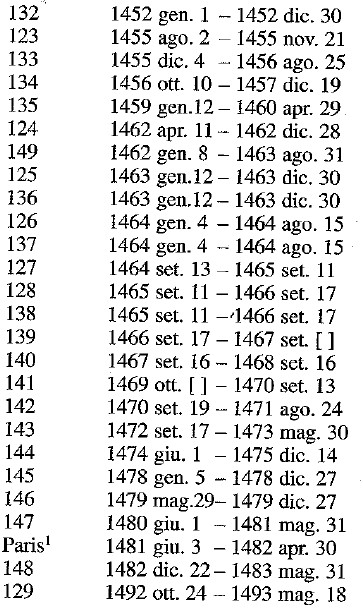 36 by Ross G. R. Caldwell
Didn't we used to have Raimondo Luberti?

38 by Ross G. R. Caldwell
It seems some people who get an academic degrees with a paper on this subject drop out of view. Perhaps they get employment where they have no time to research it anymore, or just lose interest.

J.-P. Etienvre is still around, I believe, but he has lost interest in the social history of playing cards.

Franco Pratesi got news from Prof. Esch, that he has prepared an article (which meanwhile has entered the press), in which further new data is revealed ... also about playing cards. The private announcement sounds very promising, so that we possibly have in near future better material to the situation of Triunfi documents in the Roman custom registers.
Huck
http://trionfi.com

40 by Ross G. R. Caldwell
Sounds promising. Did he say where it would be published, and when?