1 by Huck
When I think about the current activities inside Tarot history forums in the recent time (maybe a year or so, or even longer), I can't help it, they remind on this ... 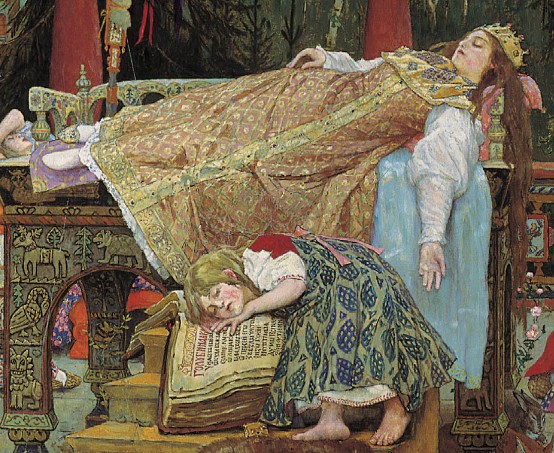 ... look at the full picture to see the whole catastrophe
http://upload.wikimedia.org/wikipedia/c ... %D0%B0.jpg

Sleeping Beauty, or, as the Germans has it "Dornröschen". A very famous story, which also got cinema attention. 2 by Ross G. R. Caldwell
I guess the pace of discovery has slowed... things trickle in, but it is not like the flood of most of the last decade.

Here is something I missed before:

Afterwards he set alight a huge castello del diavolo, onto which were thrown many forbidden books, even if they had miniatures in gold and silver, and also many playing cards, among which were some worked with gold leaf, and covered with expensive silver, which duke Gian Galeazzo had had made for his girlfriend (?). These cost 60 lire per pack.

This refers to a date in 1487, when Bernardino da Feltre preached in Parma. The price (60 lire for a deck) and the gold and silver surely mean it was triumph cards that Gian Galeazzo Sforza had made for his "amante" - his fiancée maybe?

Bernardino became object of a letter exchange between Beatrice d'Este and Isabella d'Este (notorious card players in this time):

"A report has reached us here," wrote the young duchess, "that the venerable Father bernardino da feltre, who has been preaching in Verona this Lent, was heard to declare from the pulpit that he had received a message from heaven, warning him that he would die in Holy Week, after miraculously opening the eyes of a blind man. Now I am very anxious to know if this report is true, and since at Mantua you are sufficiently near Verona to learn the truth of these tales, I beg you to make inquiries and let me know the result."

A fortnight later, Isabella, who had been absent from Mantua, was able to satisfy her sister's curiosity and at the same time answer a previous note in which Beatrice had given her a bad character of one of the Marchesana's _proteges_, an archer in Fracassa's service. She writes:--

"MOST ILLUSTRIOUS AND HONOURED SISTER,

"Only yesterday I received two letters which you wrote to me on the 16th and 17th of April: the one in answer to my recommendation of Malacarno, Signor Fracassa's archer, the other regarding a report which had reached you as to certain words which Fra bernardino da feltre is said to have spoken at Verona. In reply to your first letter, I assure your Highness that if I had ever dreamt Malacarno could be guilty of such detestable crimes, I would never have pleaded his cause, since naturally I hate such conduct. But as I had been told his faults were trifling, I consented to intercede with you on his behalf; and now I hear the bad character he bears, am well satisfied to hear the punishment which he has received, and praise your illustrious consort's prudence, while at the same time I thank you for the very kind expressions in your letter. As to Fra bernardino's supposed prophecy that he would die this Holy Week after miraculously opening the eyes of a blind man, I find that there is absolutely no truth in the report you mention. Neither at Verona, nor yet at Padua, where he has also been preaching, did he ever use such language, which indeed his humility would forbid, and as I have learnt from a monk who attended his sermons. All the same, in order to satisfy you and make sure of the truth, I have made further inquiries, the result of which I now lay before you, begging you to commend me warmly to your illustrious lord.

Either they really did respect him, or - another possibility - the sisters had their own ways to hide their irony. "Opening the eyes of a blind man" ... Bernardino da Feltre's own eyes?

"Bartolomeo Montagna: Virgin and Child Enthroned with St. Homoborus and a beggar, with St. Francis and the Blessed Bernardo da Feltre, and with Saint Catherine, c. 1515"

In July 1493 Bernardino also burnt cards in Florence. I saw the opinion, that Savonarola, who burnt card 1497, learned from him.

This page says: "Like many other missioners of his century, he had made a vast outdoor bonfire called “burning the Devil's stronghold”. The crowds were asked to throw into the fire all objects of vanity and sin such as playing cards, dice, pornographic books and pictures, jewelry, wigs, superstitious charms, cosmetics, and so forth."
http://www.facebook.com/pages/Bernardin ... 6000138116