1 by Huck
There's something strange about a phenomenon called St. Vitus dancing ...


The earliest known outbreak of dancing mania occurred in the 7th century, and it reappeared many times across Europe until about the 17th century, when it stopped abruptly. One of the earliest known incidents occurred sometime in the 1020s in Bernburg, where 18 peasants began singing and dancing around a church, disturbing a Christmas Eve service. Further outbreaks occurred during the 13th century, including one in 1237 in which a large group of children travelled from Erfurt to Arnstadt, jumping and dancing all the way, in marked similarity to the legend of the Pied Piper of Hamelin. Another incident in 1278 involved about 200 people dancing on a bridge over the River Meuse in Germany, resulting in its collapse. Many of the survivors were restored to full health at a nearby chapel dedicated to St Vitus. The first major outbreak of the mania occurred between 1373 and 1374, with incidents reported in England, Germany and the Netherlands. On 24 June 1374 one of the biggest outbreaks began in Aix-la-Chapelle, Germany (now Aachen), before spreading to other places such as Cologne, Flanders, Franconia, Hainaut, Metz, Strasbourg, Tongeren, Utrecht, and to countries such as Italy, Luxembourg and Madagascar. Further episodes occurred in 1375 and 1376, with incidents in France, Germany and Holland, and in 1381 there was an outbreak in Augsburg. Further incidents occurred in 1418 in Strasbourg, where people fasted for days and the outbreak was probably caused by exhaustion. In another outbreak in 1428 in Schaffhausen a monk danced to death, and in the same year a group of women in Zurich were reportedly in a dancing frenzy. One of the biggest outbreaks occurred in July 1518 in Strasbourg (see: Dancing Plague of 1518), where a woman named Frau Troffea began dancing in the street; within four days she had been joined by 33 others, and within a month there were 400, many of whom suffered heart attacks and died. Further incidents occurred during the 16th century, when the mania was at its peak: in 1536 in Basel, involving a group of children; and in 1551 in Anhalt, involving just one man. In the 17th century, incidents of recurrent dancing were recorded by professor of medicine Gregor Horst, who noted that:

several women who annually visit the chapel of St. Vitus in Drefelhausen ... dance madly all day and all night until they collapse in ecstasy. In this way they come to themselves again and feel little or nothing until the next May, when they are again ... forced around St. Vitus' Day to betake themselves to that place ... [o]ne of these women is said to have danced every year for the past twenty years, another for a full thirty-two.

Dancing mania appears to have completely died out by the mid-17th century. According to John Waller, although numerous incidents were recorded, the best documented cases are the outbreaks of 1374 and 1518, for which there is abundant contemporary evidence.[

The observed "strange phenomenon" is, that twice the distribution of the dancing sickness meets years, in which also playing cards might have taken a jump of distribution:

1374/1376 ... in this years there was a remarkable and far spread outbreak of the dancing mania (Aachen, Cologne, Luxembourg, Netherlands)

1376 is suspected as a large distribution moment for playing cards, as in this year the Emperor son Wenzel was crowned Roman king in Aachen. In 1377 definitely "a large distribution of playing cards" was on its way (according Johannes of Rheinfelden and other following card playing prohibition documents)
Aachen (outbreak of the dancing 1374) and Aachen 1376 is naturally the same location.

From the playing card advance there is assumed an increased production after the council of Constance 1415 - 1418. Strasbourg has 200 km distance to Constance. A minor outbreak is mentioned 1428 in Schaffhausen. Schaffhausen is very near to Constance (50 km).

From this it appears, that Vitus dancing and increased playing card distribution seem to accompany each other - cause of unknown reasons.

Further we have: In 1344 (started ?) /1355 (consecrated ? Prague got a head of Vitus then as a holy relict) Emperor Charles IV builds a church dedicated to St. Vitus in Prague (the project wasn't finished then, it proceeds with interruptions for a very long time).
http://en.wikipedia.org/wiki/St._Vitus_Cathedral

In 1373 Charles IV allows a market in Crefeld (= Krefeld) at St. Vitus day. Mönchengladbuch (not too far from Aachen, very near to Crefeld) has a big church dedicated to St. Vitus (from old times). The St. Vitus cult played a very great role for the Czech countries (long before emperor Charles IV):


His cult grew in Prague, Bohemia when, in 925 A.D., king Henry I of Germany presented as a gift the bones of one hand of St Vitus to Wenceslaus, Duke of Bohemia. This relic is since then a sacred treasure in the St. Vitus Cathedral in Prague.
The cult of St Vitus became very popular in Slavic lands, where his name (Sveti Vid = St. Vitus) replaced the old cult of the god of light Svantovid. In Croatia alone, 123 churches are dedicated to St. Vitus.

In 1374 or 1376 in Echternach (Luxembourg) an annual dancing procession is started, still existing (naturally this was a home-domain of the Luxembourger dynasty, to which Charles IV belonged)

The Vitus cult is considered very strong in 14th century (and before) in Bohemia.

Theologische Realenzyklopädie: Chlodwig - Dionysius Areopagita (1981)
By Gerhard Krause, Siegfried M. Schwertner, Gerhard Müller
http://books.google.com/books?id=-ntgMb ... &q&f=false
According this the city of Regensburg (Ratisbon) in considered as the origin of the 14 Nothelfer, which developed during 14th century since c. 1300. The row was fixed at least in the year 1408 (likely around 1400), as

According this page ...
http://www.haber-brandner.de/eshop/shop ... c60e99e4c0
... the number "14" (Nothelfer) wasn't fixed in Regensburg during 14th century (presentations of the Nothelfer showed other orders and partly other figures).

A legend reports the foundation of the church in Vierzehnheiligen in 1445/46:

According the following source the city of Regensburg (Ratisbon) was visited by 14 Bohemian princes in the year 845. They begged for the christianization of Bohemia. In the following 10 years various invasions were done by Karlmann. This was the begin of the longer christianization process.
http://books.google.com/books?id=-ntgMb ... &q&f=false

Bohemia was subordinated to the bishopric of Regensburg until 973-6.
My suspicion: the "14" Bohemian princes of 845, which are said to have initiated the Eastern christianization, might have influenced the choice of the number of the "14" Nothelfer later (around 1400).

************
A debated note of an author Anton Kerschbaumer "Geschichte der Stadt Krems" (1884) talks of a Nothelferaltar in Krems, 1284 (which would make it the oldest appearance.
Krems has as major church a St. Vitus church and belonged till 1271 to Bohemia ... in this time Krems was of greater importance than Vienna, which is 70 km to the East. The text is online, but disturbed, and I couldn't find the relevant passage.
http://www.archive.org/details/geschich ... 00kersgoog
**************

Generally it's said, that the 14 Nothelfer are mainly from "Eastern origin", so the concept carries strong Byzantine influences.

For the St. Vitus dancing it's said, that it was occasionally (or earlier) called St. John (the baptist) dancing. In 1374 in Aachen at 24th of June (day of John the baptist), it's said, that the dancers talked of John, not of Vitus.

According this the day of St. Vitus (15th of June) was seen as the longest day of the year at the end of 13th century (which somehow preceded the later correction by the Gregorian calendar change in 1582; so this was "somehow" a correct astronomical observation). Possibly the observable name change of St. John dance (St John the baptist = the earlier longest day, 24th of June) to St. Vitus dance (St. Vitus = the real longest day) depended on this knowledge.

Under this condition the assumption, that St.Vitus was chosen as a saint for the Eastern christianization, cause his name sounds like Svantovid, a Slavic sun-god, gets further logic. Naturally the mid-summer-night is an ideal date to celebrate the sun god.
The Svantovid (also Svantevit, Sveti Vid, Swantewit, Svetovit, Svatovit, Świętowit oder Святовит) cult was noted as still existent on the island of Ruegen at end of 12th century. He had 4 heads (as occasionally Janus), had a drinking horn, which was filled with mead (somehow as Bacchus), and a white horse. In Ruegen he was used as a god of divination (like another sun god, Apollo). But he was also responsible for merchants (like Mercury) and for war (like Mars). In Slavic countries he was a replacement of the more common Peron.
Mid-summer-night was celebrated with dancing and jumps through the fire, especially in Northern countries, where the mid-summer-night and the longest day is more remarkable than in Southern countries.

The descriptions of the 14th century dancing mania (which - somehow naturally - were connected to a common dancing opportunity, mid-summer-night) to some part reminds the dancing trances of the voodoo cult. It's somehow also similar to the more harmless modern appearances like carnival, the soccer ecstasies at each weekend and the common disco behavior. In the attempt to explain the phenomenon various answers are given, but in my opinion none really fits the phenomenon, which according the descriptions turned more harmless with the later time. Possibly the developing dancing culture tamed "dancing as sickness".

For the observer of Limburg, who reported the dancing catastrophe in 1374/76 and that "500 persons in Cologne" were inflicted, the whole was a cheat and he reported, that it was simply used for sex and that all the participating women became pregnant.

In Italy (15th century) we meet the Florentine John-the-baptist-festivities, which to a large degree were partly similar to carnival, though in a more comfortable part of the year (more pleasant weather). The festivity-season started with 1st of May and went then towards 24th of June. It was filled with religious processions and theater, Luigi Pulci, Lorenzo di Medici and his mother Lucrezia Tornabuoni were active in it.

But generally I find only Tarantella dancing mentioned as a comparable phenomenon.
Huck
http://trionfi.com

2 by Huck
Article to Spring-Prozession in Echternach 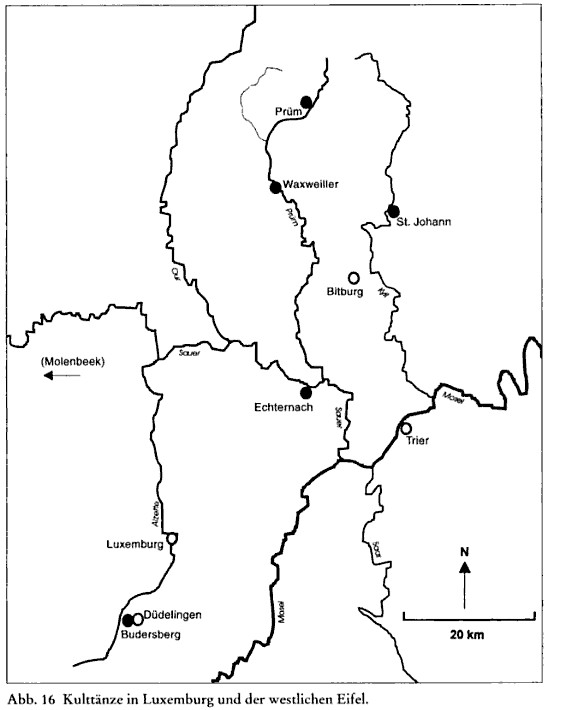 Map of locations near Echternach with some "religious-dancing" tradition ... and all have a connection to the John-the-baptist cult.
Huck
http://trionfi.com

3 by mmfilesi
Very interesting, thanks Huck.

Another dancing mania very interesting is the "tarantismo" of Puglia.