... just for mathematical reasons. However, there seems no confirmation outside in a text, that chess and geomancy was really connected in the 14th century minds (not everybody thinks in the mathematical way). Also we observe, that chess players experimented, changed the size of the boards, altered the number of figures, made variations in the rules, had different start positions.

Evrart da Conty had 16 other gods and another row, clearly dominated by the planets gods (which are the top 7 of his row) and also he felt it necessary to fulfill the chess dream with definitions from the Roman de la rose. Why not? This chess symbols enrichment game was a discussion and card designers fulfilled different visions of a possible allegory.
There is no truth in such mental games, there was just the game of building an analogy between different systems, occasionally "elegant" and "understandable by our modern mind" and occasionally "strange" and "not understandable".

has a lot of interesting researches (an attempt to get some order in the geomantic chaos) and finally presents as an idea and observation:


But there is a shocking alternative to this attractive view. One Greek manuscript – the Codex Harleianus 5596, British Museum, from the 15th century CE presents a simplified geomancy based not on tetragrams but on trigrams, i.e. only three lines of one or two dots each – out of which of course only eight different configuration can be constructed: 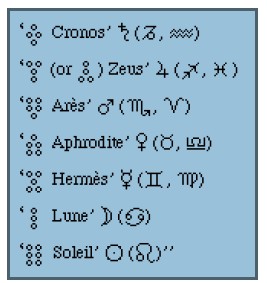 ... which is then related to the figures of I-Ching: 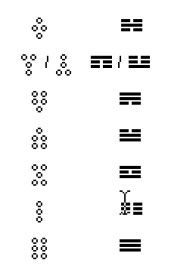 I don't discuss, if this "translation" is very clever.


In the more complex versions like al-Zanati’s (Footnote 22) the first twelve of these sixteen configurations are identified with the twelve astrological houses and interpreted accordingly, while taking into account the usual correspondences and conventional meanings of the twelve houses, the planets and the zodiacal signs.

Here we see, that the 12+4 order is used (for astrological intentions) and this appears also in the Michelino deck with 12 Olympian gods and 4 special figures.
In this aspect it's of interest to know, that Filippo Maria (as others) surely was excited about the finding of the Manilius manuscript in Constance by Poggio ... this shows the 12 Olympian gods as rulers of the monthes or the zodiac (later artflly presented in the Palazzo Schiffanoia. The new elected pope Martin visited as first place after his election the court of Milan. Poggio accompanied him. Filippo should have gotten his information "first hand". His astrologers surely were interested. But the Michelino deck didn't imitate Manilius.


Ibn Khaldun’s Muqaddima, written by the end of the 13th century CE, explains the emergence of geomancy as resulting from a situation when would-be astrologers, typically poor, under-educated and urban, had no longer access to the astronomical tables and the complex techniques necessary for calculating a proper professional horoscope, and therefore replaced the empirical input (the actual, astronomically absolutely correct, position – in most cases simplified to a mere longitude – of the heavenly bodies at the particular moment which the horoscope seeks to interpret) by the mock-astrology of geomancy: a series of chance outcomes of simple manipulations with a stick on sand, with pebbles, beans, shells or with pen on paper, but subsequently interpreted in the light of a conventionalised or better ossified astrological idiom deprived from all spatio-temporally specific astronomical input. This status as a ‘poor man’s astrology’ is confirmed by the fact that only the first four astrological houses receive an independent input, while the contents of the eight others is merely secondarily derived – which is comparable with a hypothetical situation in which some astrologer would only calculate the planets and zodiacal signs for the first four houses, and ignore the others, or (and this as been widely attested practice astrological since Antiquity) as if the horoscope would be based not on the painstaking calculation of the heavens at the time of birth, but by the mere casting of dice.

Here we learn, that geomancy was connected to the terminus "poor man's astrology" already in Arabian sources.
It's said, that many lot books were used in 14th/15th century and that many had an Eastern origin, between them also text with geomantical content. The quality of many of them should be regarded as rather low.

The I-Ching in its long tradition since ca. 11th entury BC had incorporated other systems or was used inside other contexts, which not really present the original state, similar as astrology was mixed with a lot of themes.

In other words: the 64 hexagrams are somehow artificial reduced to 16:

The I-Ching is very old, the time of the origin of the nuclear trigram technique is difficult to determine. But China was often the dominant culture, which exported technologies and culture ... so possibly also this.In contrast to the Western culture they never had such a strong interpretation of the planets, at least it appears as not so dominant at the surface.
Huck
http://trionfi.com

2 by Huck
A good overview about geomancy is found in ...

mmfilesi wrote:This is the pasage where explain the bad, neutral and good figures:


This evaluation is different to one of of the Eastern evaluations.

At page 15 there is a table with variations in the relations between geomantic sign and astrological house.

mmfilesi wrote: In any case, in reality, its not very important for this scheme. The important is they are 8 pairs opposed. 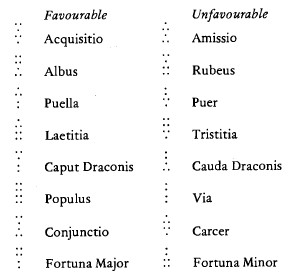 Probably you mean this.

The article of Skinner ...
http://www.iot.org.br/caostopia/wp-cont ... ingles.pdf
... at page 107 gives this to BARTHOLOMEW OF PARMA.
Huck
http://trionfi.com

http://biblioteche2.comune.parma.it/lasagni/an-ar.htm
When a man has a theory // Can’t keep his mind on nothing else (By Ross)

5 by Huck
I would think, that Palazzo della Ragioni includes an astrological program of Peter of Abano, but it contains nothing which adds to geomancy ... is this true?
So might be better to keep this topic in another thread.

The Skinner text ...
http://www.iot.org.br/caostopia/wp-cont ... ingles.pdf
... has a good overview about Geomancy production with some biographical information. The article to medieval geomanty (page 88 - 120) includes ...

... whereby the acceptance of geomancy by Kings and Dukes short before and contemporary to Filippo Maria Visconti should be of special interest (especially King Wenzel), as this court definitely took influence on Milanese ideas.
Huck
http://trionfi.com

I dont know yet. In this days I don't have many time, but I investigate it.


So might be better to keep this topic in another thread.

Perfect.
When a man has a theory // Can’t keep his mind on nothing else (By Ross)

7 by mmfilesi
The name of astrologos in the circle of Filippo:

Antonio Bernardigio aka Antonio Bernaregio
Luigi Terzaghi (born in Luca)
Lanfranco di Parma (don`t appear in other fonts)
Elia, l'ebreo (Doctor, too, of Popes Martino V and Eugenio IV).
When a man has a theory // Can’t keep his mind on nothing else (By Ross)

9 by mmfilesi
I don't know whats fonts adoperated Tolfo, but I think Decembrio knows who are the astrologi of Filippo.
When a man has a theory // Can’t keep his mind on nothing else (By Ross)

mmfilesi wrote:I don't know whats fonts adoperated Tolfo, but I think Decembrio knows who are the astrologi of Filippo.

Decembrio didn't knew everything about Filippo. And the biography had been written rather quickly short after the death of Filippo, why should he hadn't forget somebody? In Milan the situation was revolutionary and Decembrio had been in Ferrara, when Filippo died. In Milan waited important chances for Decembrio, he finally became a sort of president for the Ambrosian republic (or something similar). At least he made a lot of diplomatic mission. He became so important, that Francesco Sforza never allowed him to return to Milan.
Huck
http://trionfi.com