The movie presents the pictures in the way, that they covered 3 1/2 upper walls of a quadratic room, the studiolo, this misssing 1/2 upper wall was filled with a window. This naturally led to 8 pictures (2 rows with 4 pictures) for each full wall and 4 for the 1/2 wall (2 rows with two pictures.
Unluckily there is no indication (to my current knowledge), that this was the original way, how the pictures were distributed.
If one assumes, that the 24 pictures at the full walls were arranged in 12 old masters and 12 younger masters, this arrangement might have had a similar idea as the 12 gods and their 12 messengers.

4 pictures would have been special (1/2 wall). So the whole might be rather similar to that, what was used in the wedding manuscript.

According another reconstruction, there was a 29th picture (showing Montefeltro with his son, see below), above a bird (eagle ?).
I don't know, what sort of recreations this are ..... that such different results are both possible. 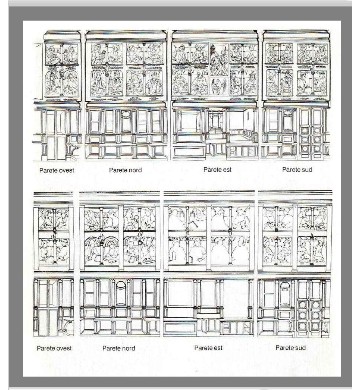 The picture is dated according the apparent age of the son, so ca. 1476. Another dating refers to 1475.
Huck
http://trionfi.com

Cut from the marqueterie work below the 28 pictures of famous men,


Intarsien (marqueterie) work in the studiolo of Montefeltro in Urbino ...
... the interesting object is the checkered ring with (I tried to count the fields from this picture, hopefully I'm not wrong) with 32x8 fields.

At least modern chess variants know the version how to play "without left and right border" (a figure, which leaves the chess board at the right side, enters the left side). ...

... using the upper ring would need magnetic figures and a cord to hang it somewhere. But the ring might be a visualization of this game idea.
The dimension of the board are astronomic, so it might be rather difficult to play a game till its end.

Cut from the above shown picture "Montefeltro with son", which is assumed to have been present in the Urbino studiolo at central position 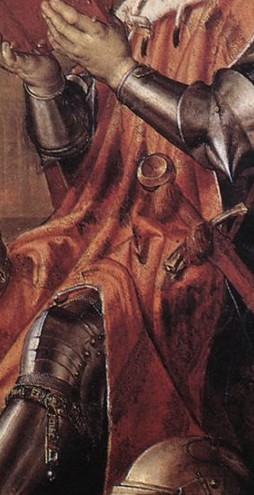 At the picture cut there are 3 interesting objects ...

1. a small ermine figure at the top signifying Montefeltro's membership in a knight order of Aragon called "Order of the ermine", founded 1465 by king Ferrante of Naples
2. A "garter" at the left leg of Montefeltro, indicating Montefeltro's membership in a knight order of England "Order of the Garter", founded in the mid of 14th century
3. a representative upper knot of the sword with some (accidental or intentional) similarity to the chess ring in the above shown picture. I would like to say more it, but ... I'm stillin search for an explanation.


The Ermine - in the studiolo Gubbio (not in Urbino)

Another emblem on the main wall shows an ermine surrounded by a circle of mud with the Italian motto NO[N] MAI ("never") above. The ermine is a well-known symbol of innocence and purity because it was believed it would rather die than soil its immaculate white coat.

An ermine appears in the Mantegna Tarocchi at 34 Temperance: 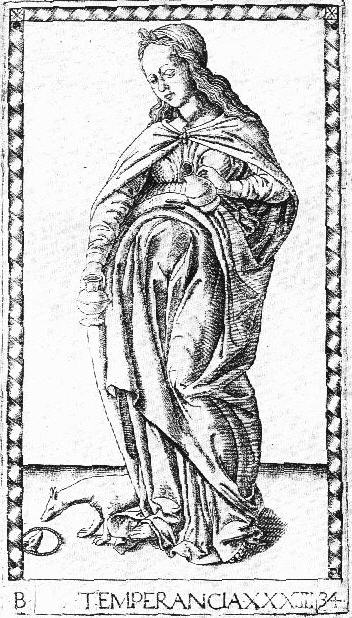 The Garter - in the studiolo Gubbio (not in Urbino)

In the center of the main wall is the Order of the Garter. It is the most prominent personal symbol, one identified with the very presence of the prince, and it was displayed throughout his private apartments and on the door of his studiolo. Federico had been elected a member of the prestigious English Order of the Garter and confirmed by King Edward IV. The insignia of the order, the jeweled garter, was presented to him by the English ambassador in a solemn ceremony held at the abbey of Grottaferrata, near Rome.

Further Details of interest in Gubbio:

Other emblems allude to Federico's virtues as a military leader. The crane, with a leg held up and a stone in its claw, is a time-honored symbol of watchfulness and an allusion to Federico's celebrated virtue of being "always vigilant and awake."

This Ostrich figure (Montefeltro studiolo Guggio) appeared in older 16th century German playing cards and at the backside of the Tarot card producer "F. in Gorizia" is discussed in the thread "Lombardische Trieste"
search.php?keywords=ostrich&terms=all&a ... mit=Search

As did many noblemen of his time, Federico had several personal emblems or devices that alluded to significant events, virtues, or aspirations. Along the center of the main wall an ostrich holds a spearhead in its beak, behind the bird is the German saying: "I can swallow a big iron." The oldest of the emblems used by Federico, it had belonged to his grandfather, on whose tomb it appears—it was evidently meant as a symbol of resistance to adversity. 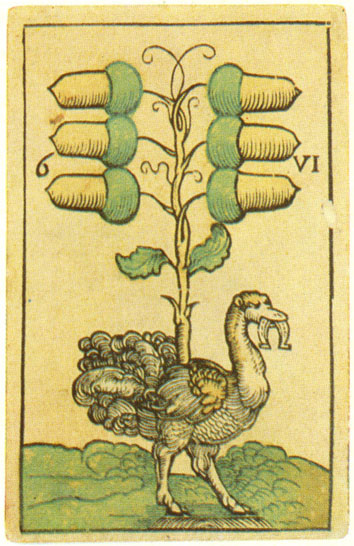 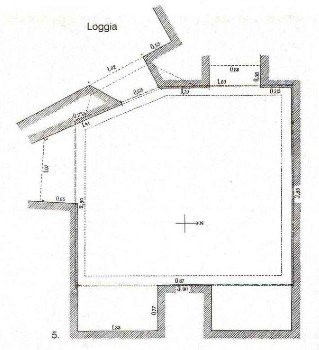 http://www.slideshare.net/christianomod ... urbino-icp
picture 5, enlargeable
base plan of Castle Urbino with position of the studiolo above the entrance 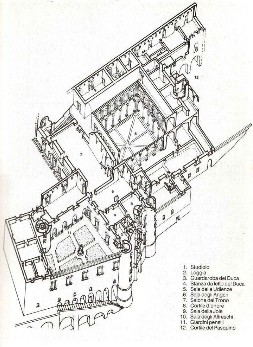 also seen at this picture

I open with this a new thread to Montefeltro, as this might be well a topic of itself.
Huck
http://trionfi.com

64 by marco
In case this has not been posted before, Biblioteca Apostolica Vaticana BAV Manuscript Urb.lat.899 is available online:
http://digi.vatlib.it/view/MSS_Urb.lat.899

No, I didn't know this online edition, though I had the pictures by a private way. It's indeed worth to take a look.
Huck
http://trionfi.com

66 by Huck
Harvey Miller
Studies in Medieval and Early Renaissance Art History (HMSAH 71)
J. Bridgeman
A Renaissance Wedding
The Celebrations at Pesaro for the Marriage of Costanzo Sforza & Camilla Marzano d’Aragona (26 – 30 May 1475)
http://www.brepols.net/Pages/ShowProduc ... 05375936-1

The translation has been made from the early printed text (the incunable in the British Library, I.A.31753 Sforza, Costantio Signore di Pesaro, 1475) and also directly from the unique illustrated presentation manuscript in the Vatican Library (MS Vat. Urb. Lat. 899) which, though previously thought to have been produced in 1480, may in fact have been made at the same time as the incunable edition. It is not known for whom the printed books were intended (7 copies only survive), but it is likely that the prominent dignitaries among the 108 guests – who included Federico da Montefeltro, the groom’s brother-in-law – would have been the recipients of the account when it was printed in November 1475.

This present edition of the text includes all the images that illustrate the original manuscript – 32 full-page miniatures that depict the floats that welcomed the bride at the city gates of Pesaro; the costumed figures at the wedding banquet who represented the presiding Sun and Moon or the male and female messengers of the classical gods and goddesses who announced the exotic dishes of the 12-course banquet; and further colourful, unusually interesting illustrations of the ballets, fireworks and triumphs of the final two days of the celebrations.

In addition to the Introduction that provides the reader with the historical background and biographical details of the protagonists and personalities of this special occasion, Dr Bridgeman also adds helpful and highly informative annotations to the narration itself. In addition she provides full descriptions and explanations of the illustrations – all reproduced here in colour – and devotes a separate appendix to listing and explaining all the dishes served at the wedding banquet, together with their ingredients and recipes.

Dr Jane Bridgeman is an Associate Lecturer in Fashion History and Theory at Central St Martin’s College of Art, London. After graduating in Italian at Birmingham University, she studied History of Dress under Stella Mary Newton at the Courtauld Institute of Art, London where she also gained her Ph.D. on Aspects of Dress and Ceremony in Quattrocento Florence. She has taught at a number of universities and art colleges in the UK and has published numerous articles in English and Italian on the iconography of dress and the history of textiles.

67 by Huck
Notes to the theme:

thread: A Palermo Empress for the "Alessandro Sforza"?
viewtopic.php?f=11&t=1112&hilit=palermo

Phaeded wrote:
At all events, why do the 'CVI' and 'AS' decks feature black shields on the highest suit of swords, a color of mourning?

Huck wrote:
My 2 cents ...maybe this was just a free place to add the heraldry of the buyer of the deck?

That only makes sense if the black is then painted over with the relevant livery color(s) of the buyer/recipient, which in the case of the 'AS' would be red; why is it instead black, when on the numerous examples in the festival book they always show the Sforza-Pesaro color of red? E.g.:

It makes more sense for an artist studio to leave a shield blank and not waste the black paint. The black signified something: (a) death.

The themes involved a check of older posts from (2009/10), which had focussed on the diamond symbol ...

Further expansion of the theme in the thread ...
Costanzo Fest book and 'AS' deck - shared attributes
viewtopic.php?f=11&t=1162
Huck
http://trionfi.com

69 by Huck
Researching the members of the knight orders of Renee d'Anjou I found the following context:

Charles d'Anjou (above) is the younger brother of Renee d'Anjou, so it's not a wonder to see him as a member in the knight order.
Surprising to me was the name of Francois-Alexandre Sforza (= Francesco Sforza, later duke of Milan) who appears here as a sort of rather distant brother-in-law to this Charles I.

Polissena Ruffo married 1418, October 23, Francesco Sforza. She got a daughter Antonia, who died early. Also the mother died (1420). Later Sforza called another daughter (illegitimate) Polissena (* 1428,1429). She married Sigismondo Pandolfa Malatesta (1441/42) and was (possibly) killed by her husband in June 1449.

Charles I (above, Anjou-family) married a sister of Polissena in 1434, Cobelle (or Cubella) Ruffo (1400-1442/1445), who was a widow of Jean-Antoine Marzano before.
Cubella and Giovanni Antonio Marzano got a son, Giovanni Francesco Mariano Marzano. He married in 1444 a daughter of Alfonso of Aragon, king of Naples, Leonor d'Aragon (close to the marriage of Leonello d'Este with another daughter of Alfonso).
The young pair got children, between them Camilla d'Aragon Marzano, the bride in the festivities in her wedding with Costanzo Sforza in 1475.

So the discussed wedding activities were based on old family relations between Sforza and Ruffo.

The name San Severino appears also in the ancestor lists. Later the condottiero-family Sanseverino served in the Milanese armies for the Sforza. Cicco Simonetta, the long-time secretary of Sforza and for some time the most important man in Milan under Bona of Savoy, came also from this direction. He was executed, when Ludovico Sforza got the power.
Huck
http://trionfi.com
Cara
Cara

70 by Cara
Hello Everyone !

Could you please tell me, if you have a transcription and translation of this part of the text. You mentioned it in one of the posts here- post n. 42, page 5 of the topic. Or could anyone help me with sorting it out ? I would like to use it in my paper.