Attachments
LyonFabR1.jpg Not downloaded yet 267.09 KiB

2 by Huck
Is it known, who "NR" (on the chariot) is? I found Nicolas Rolichon

Jean-Marie Lhôte in his Histoire des jeux de sociétés reproduce an image from the Dictionnaire Larousse Mensuel juillet 1919 that pictures the atouts from a Tarot de Marseille deck attributed to a Nicolas Rolichon from the XVIIth century. The picture seems to present a lot of similarities to Dodal or Payen decks, but I didn't find a lot of discussions online regarding this supposed Nicolas Rolichon' Tarot - which is odd since there are lots of discussions about the Chosson's datation. So is that a known mistake that has already been documented or another big question mark ?

Thanks in advance for your replies,

3 by Nathaniel
Steve, what is your source for the 1638 date for Rolichon? The sources I have seen give 1635 as the latest known date for Nicolas Rolichon.
SteveM
SteveM

[There was another son Nicolas, but there are no records of him after his birth in 1636 - and he probably died at birth or early infancy] 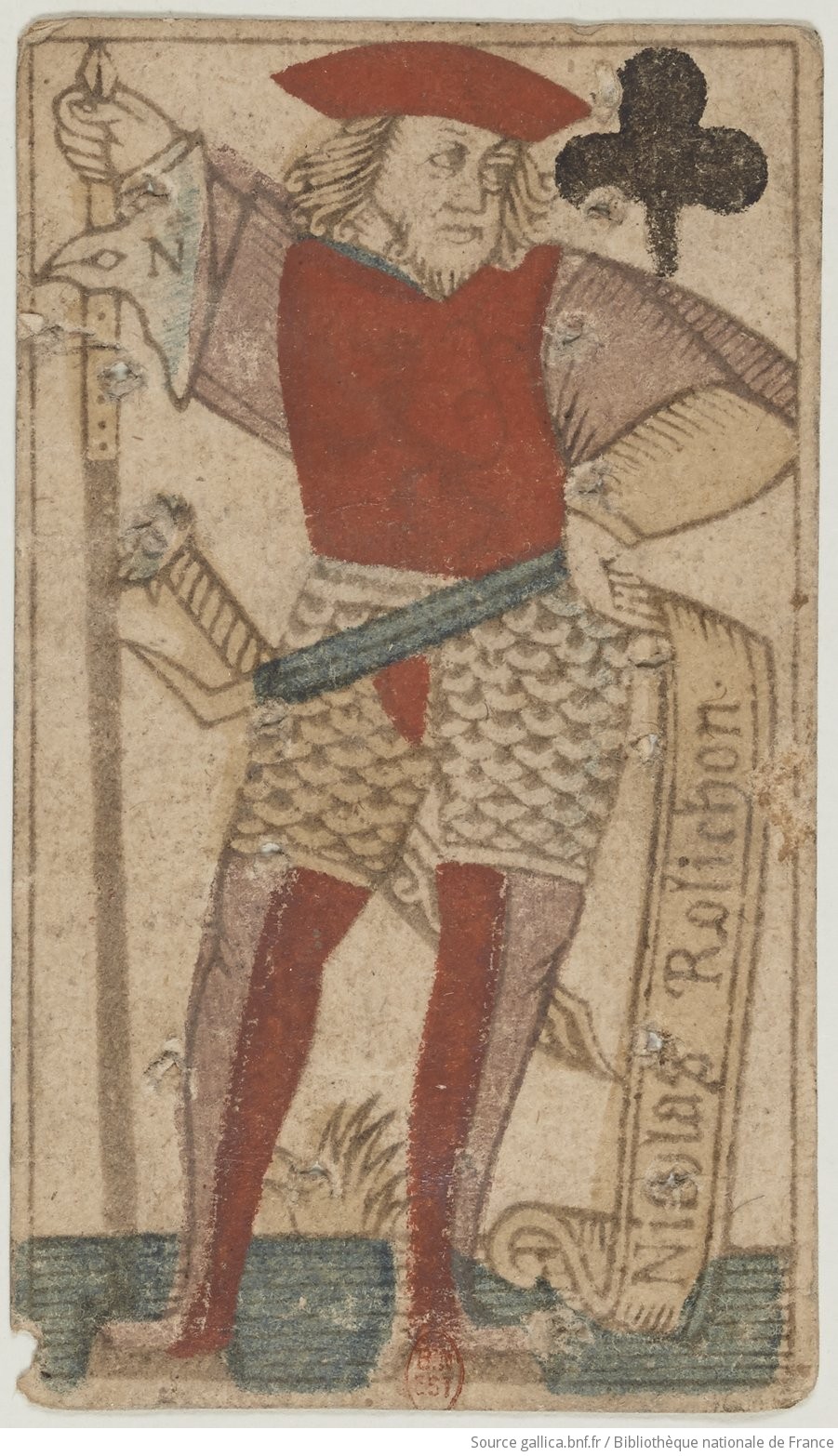 That's the Nicolas Rolichon card from 1575 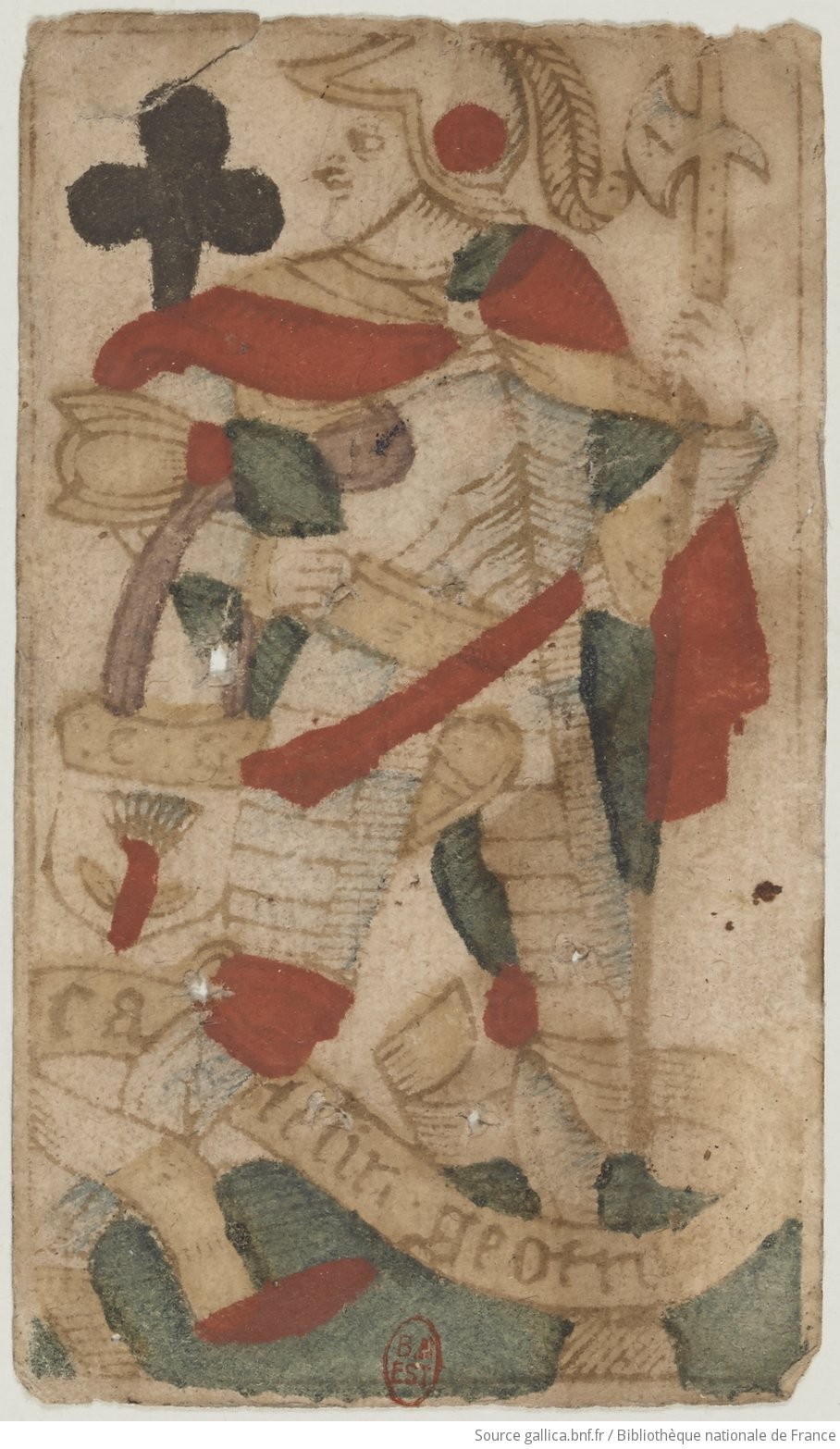 7 by SteveM
"Acts of adoption of the Fédides children, both by the Hôtel-Dieu of Lyon and by the general alms" :

quote
"Testament (December 28, 1670) by which Étiennette Durrieu, widow of Antoine Fédides [sic]*, merchant and master cardmaker in Lyon, named as her universal heirs seven of their children; and as the testatrix has no relative, neither on her side nor on that of her late husband, who can take charge of the administration of the property of her heirs, she asks the rectors of general alms to be good enough to fulfil this office...;
"and for the pains and cares which the said rectors shall take, she bequeaths to the poor of said alms the sum of 600 pounds, which they (the rectors) will charge, in addition to the expenses and what they shall pay, out of that which they shall receive of his heirship: appointing them, for the above purposes, executors of his present will and absolute administrators of the property of his heirship and of the persons of his children."
end quote

*Note: Étiennette Durrieu was actually the widow of Estienne Fédides [c1620s - c1668], who was active as a Maitre Cartier in Lyon from c1638 - c1668. She is among 17 Master Cardmakers recorded as such [Dame Estiennette Durieu veuve de Estienne Fedide] in a list of 63 members of the cardmakers corporation in a document of a meeting dated June 5, 1668. [Held in the Municipal Archives of Lyon, ref: HH/28]. Antoine Fédides was her stepson and is listed in the same document as a Companion Cardmaker at that time. He was the son of Estienne and his first wife, and he was baptised December 15, 1645. Étiennette Durrieu & Estienne Fédides were married January 30, 1650.

"Extract from the estimated inventory of manufacturing equipment and worked and unworked goods, found both in the workshop and in the shop of the deceased Fédides and Étiennette Durrieu, his wife, who all occupied a house in the rue de la Sirène, In Lyon.

Note: The word translated as 'dressings' [l'habilage - dressings, coverings] refers to the materials by which the imprints of the mold are coloured, i.e, stencils. See the original french text for a fuller list of the inventory [link below], I have only translated the beginning and end of it above.


quote:
"Sale made concurrently by the rectors of the two hospitals in Lyon as adoptive fathers of the children and co-heirs of the wedded couple Fédides and Durrieu, for the benefit of Jacques Vianay, merchant and master card maker in this city, of all the tools, paraphernalia and proper utensils necessary for the profession of the cardmaker, and of all the merchandise, cards worked and unworked, papers & other assortments utilized by the deceased Fédides and Durrieu for the exercise of their industry, and described in the inventory above: the present sale passed average price and a sum of 3,000 pounds. By the same act, the aforementioned administrators' lease to Vianay, the purchaser of the fund of Fédides, for five years and at the annual price of 130 pounds, the name and privilege of the said late Sir Estienne Fédides: during which time, the said Sir Vianay will use the said name and mark of the said Sir Fédides, following the privilege obtained by him from the late Monsignor the Duke of Orléans; and on the superscription and envelope of the said cards, in large and in detail, will be inscribed these words: Fine cards or Trialles* of Estienne Fédides made by Jacques Vianay; on the express condition that during the said five years, the said two names may not be separated and will always be united, to the form only above," etc.
end quote

Note: Trialles are the discards sorted out from the Fine cards during the sorting and collating process. To reduce the expense of waste those that are of sufficient quality to still be used are sorted and collated into packs of a lower, less than fine, quality. Trialle or Triaille of Fine packs were subject to different tax rules and thus cheaper to sell and in the Articles of Master Cardmakers of Lyon it is forbidden for any cardmakers to produce such packs of lower quality on purpose, or to cut and re-package used second-hand decks, or to use discards from any other cardmaker and that they are to be formed only from the discards of their own blocks. That this occasionally nonetheless occurred is one of the possible explanation for variations is spelling in a deck. This was easier to do and get away with when making a standard regional portrait of a similar size, which at that period usually had blank white backs. It was more difficult with tarot decks and their patterned backs, but still possible if the cardmakers used the same backs and the decks were of a similar size. This might be one explanation for how mixed Type I and Type II decks developed? Or of why we find many variations in orthography within a deck?

Question: What are 'Grands" & "Petits" tarot? A large & small tarot, or a full & a reduced [as in number of pips] tarot?

If any French speaker would like to check, correct or amend the translation, I shall be pleased to edit it upon their advice.

ps: We have no examples of the tarot decks by Etienne Fedice, whether Grands or Petits, which is why I have filled his spot with the armorial of the Master Cardmakers of Lyon. Of course, they may have been very different from those of Rolichon, Dubesset & Dodal[Dodat].
SteveM
SteveM

8 by SteveM
Dating of the Guillaume Dubesset

The dating of the Guillaume Dubesset is speculative, based upon the little information available to us, and admittedly insecure assumptions, but not, I think, too much of a stretch?

"Sieur Guillaume Dubesset, maître cartier de Thiers en Auvergne, demeurant à Versoix",as registered in the Archives of the Republic and Cantons of Geneva, married Dorothee Depreaux in Versoix on September 4 1690, with whom he has two children there in 1691 & 1692.

On June 15, 1691, Sieur Louis Despréaux, the cousin of Dorothee Depreax, signed an apprenticeship contract with Sieur Guillaume Dubesset for his son Isaie Despreaux - who will then, in turn, become master cardmaker (Isaie, born in 1673, is c17/18 years of age in 1691). He is then found installed in Grand-Saconnex, until 1722.

1> There is no record of birth, marriage or of children or of the death of any likely candidate in the archives of Lyon, nor any other record of such a person in the notaries. The archives of Lyon are extensive, and it seems unlikely to me there would be no testimony of his presence there at all, besides that of the Tarot deck bearing his name, if he had been permanently resident there.

2> The surname Dubesset, while rare in Lyon, is common in Thiers and other regions of Auvergne. While I can find no record, as yet, of a cartier by that name in Thiers, there are at least people of that name there. There are for example the baptism of two Guillaume Dubesset in the Parish of Saint Jean [Gene] in Thiers, one in 1650 & the other in 1659. The Godfather of the second is also named Guillaume Dubesset, unfortunately the registy does not record any professions of parents or godparents.

3> The movement of cartiers between Thiers & Lyon was commonplace, there are many examples of such we can draw upon.

4> He is the only candidate we have. Despite not only my own researches through relevant archives, but the far more extensive research of Jean Luc Lanez & of Thierry Depaulis.

The other, and perhaps even less secure assumption, is that Guillaume Dupesset maitre cartier of Thiers would be active in Lyon prior to his emigration to Switzerland, and thus would be pre-1690.

It is possible I suppose, that after getting married, having children and setting up shop in Geneva, he deserted them and ran off to Lyon? Or that he had a workshop in both Geneva & Lyon concurrently?

Pertinent to note maybe, given the religious troubles of the time between Catholics and Protestants being the cause of much of the emigration to Switzerland, that Guillaume & Dorothee were married in a Catholic church. I was assuming that Guillaume was nominally a Catholic anyway, given that the articles of the master cardmakers of Lyon and other regions stipulate that any apprentice taken on had to be Catholic.
SteveM
SteveM

SteveM wrote: 24 Jan 2022, 14:23
Pertinent to note maybe, given the religious troubles of the time between Catholics and Protestants being the cause of much of the emigration to Switzerland, that Guillaume & Dorothee were married in a Catholic church. I was assuming that Guillaume was nominally a Catholic anyway, given that the articles of the master cardmakers of Lyon and other regions stipulate that any apprentice taken on had to be Catholic.

Or at least that was the case in the Statutes of 1724:

Art. 8 - Those who wish to be bound as apprentices will have reached at least the age of twelve years, it is forbidden to receive any who are married and who are not of the Catholic, Apostolic and Roman religion, on pain of nullity of his apprenticeship and a forfeit of fifty pounds towards the master who will have obliged him.

The Catelin Geoffray card, which is given to 1599 (by whom for what reason ?)

There is something written in the middle height of the card at the left side (5 letters ?). Any ideas?

There is a second card with a Geoffray ... 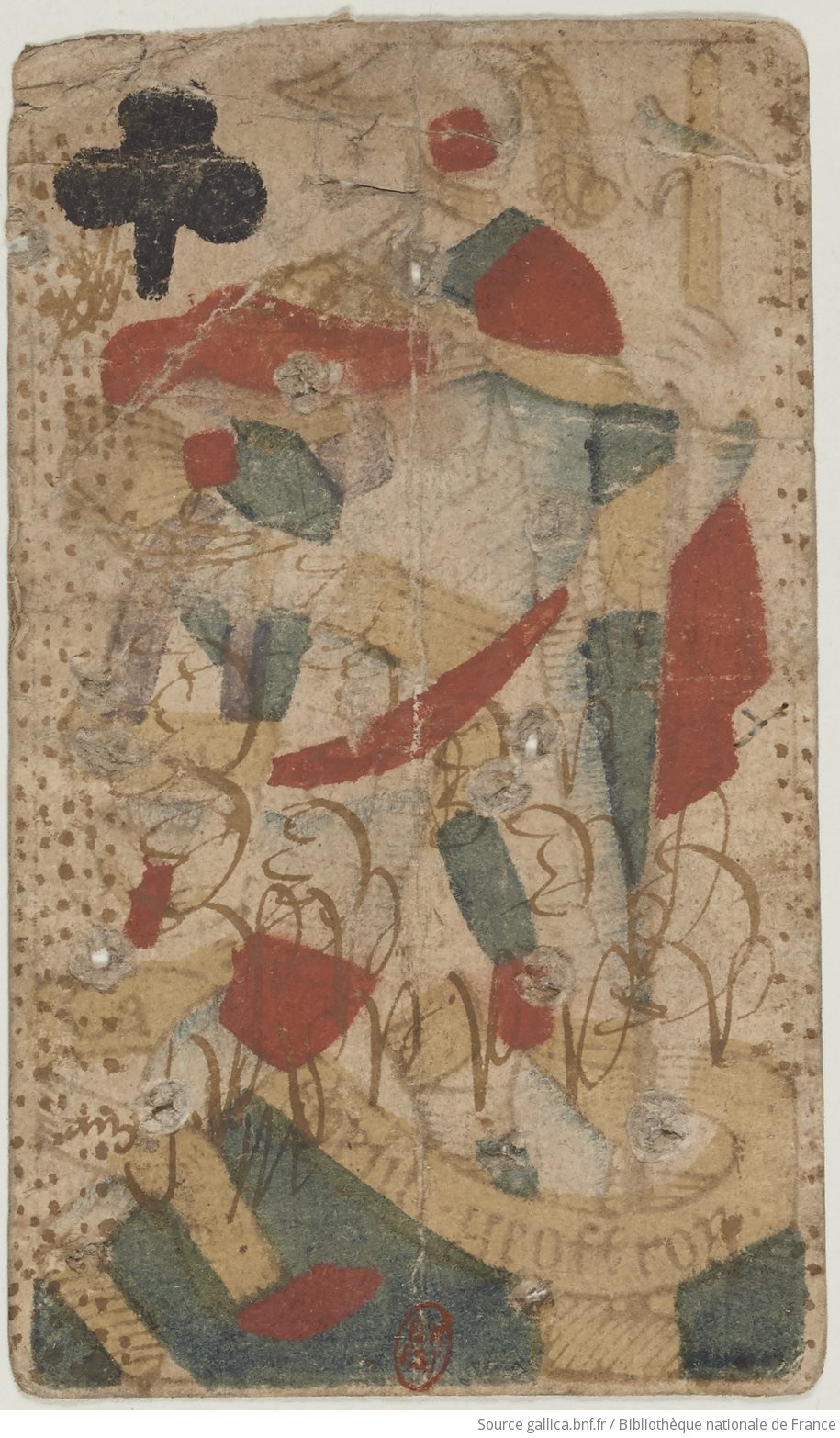