Re: Evidence of the Bolognese tradition in French tarot

Nathaniel wrote: 05 Jun 2021, 11:16 The Belgian batons are even more uniquely Bolognese: They share features with the batons of the Bolognese Primiera deck, which are found in no other place. They are admittedly different from the batons in the earliest surviving Bolognese tarot decks, but the earliest of those decks (the Alla Torre) is from the 17th century, so it is likely that at least some Bolognese tarot decks in earlier centuries had batons more like those of the Primiera decks. The Belgian cards—which were normally labeled “cartes de suisse”—also show another connection to Switzerland here: Not only did they have the Fool marked as the highest trump, as in the tarot of Swiss Valais, but their batons were also very similar to the batons in some Swiss tarot decks. These Swiss batons essentially look identical to the Belgian ones, except that the rings that bind the even-numbered batons together was removed, with all the batons being made to look the same as the central one on the odd-numbered cards.
. 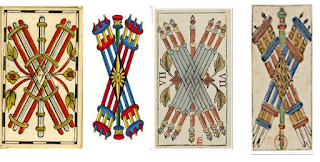 
I feel the need to update the above section of my post on the Bolognese links to French/Belgian tarot: I now believe that the early Bolognese batons always looked essentially like those of the Alla Torre deck, and never like those of the modern Bolognese Primiera deck.

I'm basing this on a 7 of Batons from a double-headed Bolognese Primiera deck from around 1840 in the late, great Guiliano Crippa's collection (I wonder what has happened to that collection now?) which is pictured on p. 63 of Alligo and Milano, eds., Le carte da gioco in Emilia e Romagna secoli XVIII e XIX, Turin: Lo Scarabeo, 2007. The previous page of this book, p. 62, describes two complete single-headed Bolognese Primiera decks from the early 18th century which were also in Crippa's collection, and which would have been even more useful for my current purposes, but alas no numeral cards from their Batons suits are shown.

However, all twelve of the cards that are shown from these two single-headed decks are identical to their counterparts in the 17th century Alla Torre tarocchino deck. Six more single-headed 18th century Primiera cards are shown on p. 235 of Hargrave's A History of Playing Cards, and those too have designs identical to their Alla Torre counterparts. So it seems that the Bolognese Primiera cards of that era were essentially identical to the suit cards of the contemporary Bolognese tarocchino decks. This means the Primiera Batons cards would have looked like those of the Alla Torre deck, and not like those of the Belgian and Swiss tarot. And there is nothing to suggest that they had changed much since the 15th century, as they are basically quite similar to several 15th century hand-painted cards (like these in the Louvre, probably from Florence).

Does this invalidate my argument that the Belgian/Swiss batons look like they were derived from a Bolognese original? No, I don't think so. If we look at the 7 of Batons from the double-headed Primiera deck of 1840 and compare it with the 7 of Batons from the Alla Torre deck, it is fairly clear that the top half of the two cards is essentially identical. What has evidently happened is that the top half of the old Batons card was copied in mirror image onto the bottom half of the card, as one would expect in a double-headed deck: 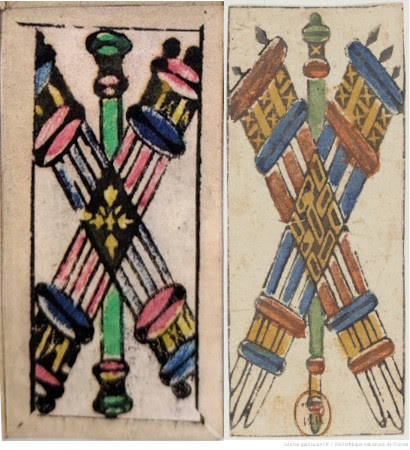 Now, I am not suggesting that the Swiss and Belgian tarot decks, after having developed from a Bolognese original from the 15th century, mediated via Piedmont, were then somehow influenced anew by Bolognese double-headed decks in the 18th century. No. Rather, I think this is simply a case of "convergent evolution": at some stage, the Swiss cardmakers did basically the same thing as the Bolognese, and changed the bottom half of the Batons cards into a mirror image of the top half. As a result, their Batons cards ended up looking remarkably similar to the double-headed Bolognese ones.

Some might find that difficult to believe. But in fact, it seems extremely likely. Why? Because this decision to make numeral cards look more symmetrical—especially those of the Batons and Swords suits—seems to have been made again and again, in various different regions at different times. For example, the 2 of Batons in the Minchiate deck shows a round knob on one end of the batons, just like those of the Budapest-Metropolitan cards and a set of cards from mid-15th century Rome (see Lamberto Donati, Stampe del XV secolo, Strasbourg: Heitz, 1936, pp. 12-15 and corresponding plates), but the other Minchiate Batons cards have removed the knob, making both ends look identical. The opposite seems to have happened in Ferrara, where the court cards of the 15th century Este tarot deck show a knob on only one end of the batons, whereas the 16th century Orlando tarot cards in Rome show symmetrical knobs on both ends. The highly symmetrical appearance of the Batons and Swords in Milanese decks (and consequently in the Tarot de Marseille) is no doubt due to the same general design trend. Presumably this trend had the same motivation as the trend toward double-headed court cards, i.e. the desire to make it easy for players to recognize cards regardless of which way up they were held.