21 by Huck
I looked for it, but I don't get a clue, why in the article of the Gutenberg year book Erhard Ratdolt (German printer in Augsburg and for some time active in Venice, often with astronomical topics) and Crivelli are mentioned. Crivelli worked on a geography text, printed 1478 in Bologna, which competed with the work of Sweynheim in the same year, which we discussed in the Mantegna Tarocchi thread ...
viewtopic.php?f=12&t=463&p=5950&hilit=crivelli#p5950
... and following posts Feb/Apr 2010.

Crivelli worked with copperplate engraving. It seems to me (I know only the snippets) #, that the writer of the article speculated about this new technology, if it was the background of the Bologna-1477 document found by Orioli.

Anyway, one gets, that Robert Biancichelli (or Blancichelli) was a man from Rimini and I found, that he had a notary archive, which reaches from 1423-1498 and it seems to exist still in our times. I wonder, if there is more to his activities with Bonozzi (I just found a note about this archive, not more).

Perhaps Bianchelli made the decks for the Rimini market?
Robert Malatesta ruled in Rimini. He was then (1477) condottieri of the Chiesa and he had married in 1475 a daughter of Federico Montefeltro (leading general of the Chiesa), which was thsame year, when Costanzo Sforza married Camilla d'Aragon (and Montefeltro had managed this marriage). The wedding had remarkable features and these were manifested in a festival book ...

In this text a specific Venus motif was presented ... 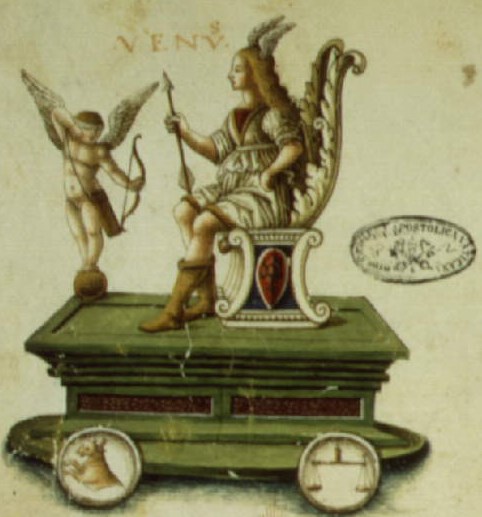 ... which curiously was repeated in a text of Erhard Ratdolt some time later (Ratdolt edition of 1488, Flores astronomiae) ... 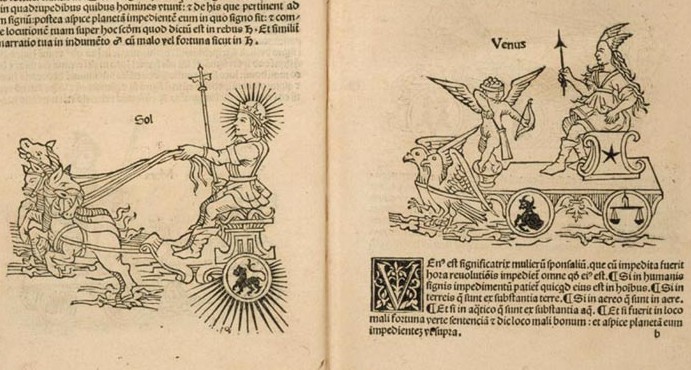 Maybe this was just a rather common motif, but I'm puzzled, that Ratdolt was mentioned in the this article of 1940.

There are 32 km distance between Pesaro and Rimini. Guests from far away could travel from one festivity to the next.


The translation has been made from the early printed text (the incunable in the British Library, I.A.31753 Sforza, Costantio Signore di Pesaro, 1475) and also directly from the unique illustrated presentation manuscript in the Vatican Library (MS Vat. Urb. Lat. 899) which, though previously thought to have been produced in 1480, may in fact have been made at the same time as the incunable edition. It is not known for whom the printed books were intended (7 copies only survive), but it is likely that the prominent dignitaries among the 108 guests – who included Federico da Montefeltro, the groom’s brother-in-law – would have been the recipients of the account when it was printed in November 1475.

SteveM wrote: *The modern cost of some artisan pigments/dyes from one supplier today (for 10 grams), which may give some idea of their relative values:

So one ounce of verde azuro (malachite) that cost 6 soldi (L.0.6] would cost today in dollars $42.51. Azurite is 3x as much, verdigris less than half as much, and brazilwood a little less than a 15th as much; the cheaper azure/blue pigment is 45x more expensive than the cheap brazilwood (however, one might need a greater amount of brazilwood to get a decent colour than one does the expensive pigment).

23 by Huck
Added: To the wedding of Roberto Malatesta and Elisabetta Montefeltro

... the girl was 11 years old, which possibly means, that the actual wedding night was consumed some time later, possibly a reason, why Rimini needed Trionfi cards later, let's assume 1479. The (first) wedding took place at 25th of June 1475 and likely was needed for immediate political interests.

Google-translator: He married the daughter of Federico da Montefeltro Elizabeth: the dowry is set at 12,000 ducats. Among the festivities it is also organized the battle of the castle, where a team that led by Giovanni della Rovere tries to get hold of a castle defended by Baldaccio from Pontoglio and by the Malatesta. The defenders of the castle all wear a green livery.


Giovanni della Rovere later married another daughter of Federico Montefeltro (1478) ... all this was suggested earlier between Montefeltro and Pope Sixtus IV (22 agosto 1474) and led later to the condition, that the Rovere family got Urbino after the death of Federico's son Guidobaldo. The real wedding was at 11 May 1478, the bride also got 12.000 ducats as dowry (I remember to have read, that there was the contract in 1474, that Urbino would fall at the descendents of Giovanni Rovere, if the son Guidobaldo would stay childless).

The date of the Bolognese document is 21 June 1477, which means, that the work started at 1 August 1477 and the contract was finished after 18 months at 31 January 1479. If we assume, that a fixed date for the second wedding was given (or a first child was expected around that time ?), then we have a reason, why the contract was so heavy in its fines, if the work wasn't delivered at the right time.
Huck
http://trionfi.com
SteveM
SteveM

(For comparison we know that Borso d'Este's fresco painters were paid 10 bolognini per square foot - these were skilled artisans of course, not apprentices.)
mikeh
mikeh

The modern cost of some artisan pigments/dyes from one supplier today (for 10 grams), which may give some idea of their relative values:

I notice that the Rothschild sheet uses blue sparingly--and then a light blue rather than deep--relying more on green (verdigris?) and red (brazilwood)
http://gallica.bnf.fr/ark:/12148/btv1b105109607
But blue swords do take up a bunch. I see no tendency to turn green, which you say would happen with malachite's blue.

The Metropolitan cards use less. relying on red and brown
http://www.metmuseum.org/art/collection ... cchi&pos=3

(For comparison we know that Borso d'Este's fresco painters were paid 10 bolognini per square foot - these were skilled artisans of course, not apprentices.)

Things are difficult with the money. I once attempted to get an overview, but it was difficult.
viewtopic.php?f=11&t=884 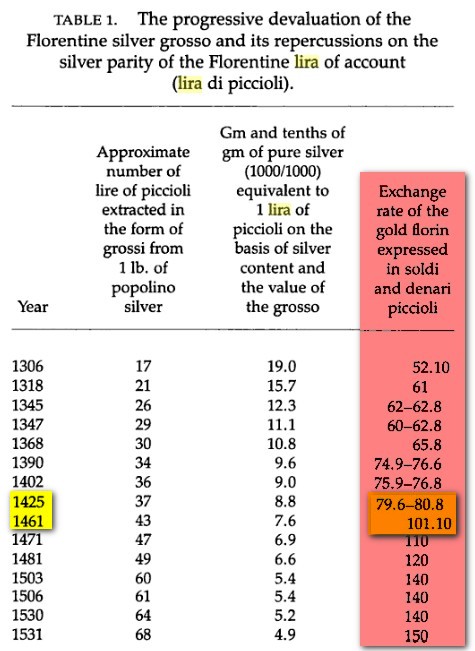 ... shows, that the relation ducat - soldi changed with the time. The soldi did fall in c130 years about 66,3 % between 1302 and 1531 against a ducat. I think, this is a Florentine list. Around 1450-1455 there must must have been a factor, that an old Florin had 80 soldi and a new Florin coin had 100 (or I misunderstood something). The time of an event plays a role. Around 1477 (which interests us in the moment) the Florentin ducat should have had about 115 Soldi in Florence and likely 5,75 Lira.
But with that we don't have the key of the Bolognese money.

The Lira Marchesana (Ferrara), which interests us in some documents, was earlier far stronger than the Lira in Florence. 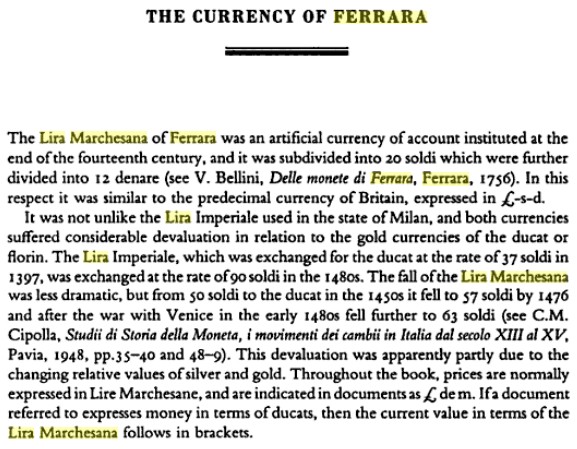 It's still stronger in the relevant time, perhaps around 60 soldi for a ducat. So 1 ducat = 3 Lira Marchesana. Actually I find a c832 Lira Marchesana = 300 ducat (1 ducat = 2,77 Lira Marchesana) in 1476.
Bologna is closer to Ferrara than to Florence. I don't have a list for Bologna, it's difficult to estimate something.
Huck
http://trionfi.com
SteveM
SteveM

27 by SteveM
Re: currency - this article on the earnings of a fencing master/astrologer in Bologna in the XVth century might be of interest:

28 by Huck
Somewhere exists a list of incomes in Ferrara. I remember, that a common noble man, who had to pay salary for 1-2 servants and for a horse, had about 20 Lira Marchesana in a month. A servant might have had only 1-2 Lira (but I assume, that he had free meal and direct living costs).

We need a list of Bolognese currency around this time. Actually something like this should exist. But it's difficult to find.

I find this ... money notes of Leonardo da Vinci, likely from Milan, before France captured it.
https://abagond.wordpress.com/2007/05/1 ... rdos-time/


Leonardo da Vinci mentions money and prices in his notebooks, almost in passing. He tells how much he paid gravediggers, for instance, and how much it costs to have your fortune told.

Like the English pound, shilling and pence, these come from the Roman system of of libra, solidus and denarius. But the money in Italy lost its value far more quickly than in England so that by Leonardo’s time the soldi had pretty much the same value as Shakespeare’s penny.

The coins that Leonardo mentions (with their rough value in metric pennies, which have 0.5 grams of silver):

The soldo and lire are silver coins. I put six lire to a florin, but in practice it was not that fixed. You might get anywhere between four to seven lire for a florin, depending on the going rate between silver and gold.

Leonardo generally got paid in ducats and florins. His income went up and down a lot, but in the long run he made about 50 to 100 ducats a year. That is equal to about a painting a year.

At the end of his life Leonardo worked for the king of France, who paid him 400 ducats a year. Compare that to Michelangelo, who got between 200 to 450 ducats for his sculptures.

One ducat was spending money for Leonardo, but for one of his students it was ten days’ pay.

Some prices from his notebooks (in soldi):

This looks promising, but difficult to understand. This is volume 1 ...

This seems to be an expansion of volume 1
https://books.google.de/books?id=kWBLAA ... r_versions

This seems to be an expansion of volume 2
https://books.google.de/books?id=pmBLAA ... r_versions

In volume 1 page 281-289 seems to be of interest.
Huck
http://trionfi.com
sandyh
sandyh

As to why the number 125 was chosen, rather than ten dozen, that was likely to be because it was a contract for a mixed supply of regular and tarocchi decks. As the need for each kind of deck varied, there would not be an even number of dozens of either kind of deck, most months. If a dozen came in a box, there would not be full boxes, in any case.

The smoothness of this arrangement does require that the ratio of tarocchi cards to regular cards be a ratio of small integers. If it was 56 cards in regular to 78 cards in tarocchi, then the only way to get more tarocchi decks would be to take 39 fewer regular decks for each 28 extra tarocchi decks, hardly practical. So this evidence is strong support for a simple integer ratio between regular and tarocchi cards. The regular deck was 52 (although four different face cards are used in Italy, any given region uses only 3) This is true as far back as the evidence goes, as far as I know. The ratio of 52 to 78 is 2 to 3. That is by far the best fit to this contractual arrangement. If the ratio was 4/5, and if the regular deck was 52, and the tarocchi deck had 14 cards per suit, and a fool, then the number of trumps was 8. If the ratio was 4/7 or 5/7 or 6/7, the number of trumps was not an integer. If 2/4 or 4/8, the number of trumps was 47.

Unless 8 or 47 trumps seems plausible to anyone, and if it is true that the regular deck had 52 cards in 1477, this contract would seem quite strong evidence that the number of trumps in these 1477 tarocchi decks was 21.

Have I made a mistake in my math?