Huck wrote:According my information Dummett wrote
"From a letter of 1451 from Bianca Maria Visconti to her husband Francesco Sforza, asking him to send to Sigismondo Malatesta, lord of Rimini, a pack of Tarot cards of the kinds made in Cremona, which he had asked for the previous autumn, we may infer that Cremona was especially renowned hand-painted playing cards of this kind. (39)" (Page 22)
Note 39: (unluckily I've not note 39 .... anybody else?)

Footnote 39 reads: "Gregory 1940, p. 157, quotes this letter, asking the Duke to send to Sigismondo Malatesta a pack of "carte da trionfi de quelle fatte a Cremona", together with a straw hat, another speciality for which Cremona was famous. She quotes it again in Gregory 1958, p. 32, where the phrase is given slightly differently as "quelle carte da trionfi che se ne fanno a Cremona".

I've wondered if there is more than one letter, given the different quotes people like Gregory and Bandera use, but since nobody has published the whole thing in any available source, I can't say yet.

Note that more results turn up if the phrase quelle carte di trionfi che se ne fanno a Cremona is used, but Gregory's quote, with "da trionfi", is the only one found in Google Books.

Everybody quotes the same fragment of the sentence, nobody seems to quote the whole letter.

#13 by Huck
Franco Pratesi has checked the both sources of Gregory. The note of 1440 he found not interesting, the note of 1458 doesn't say much. 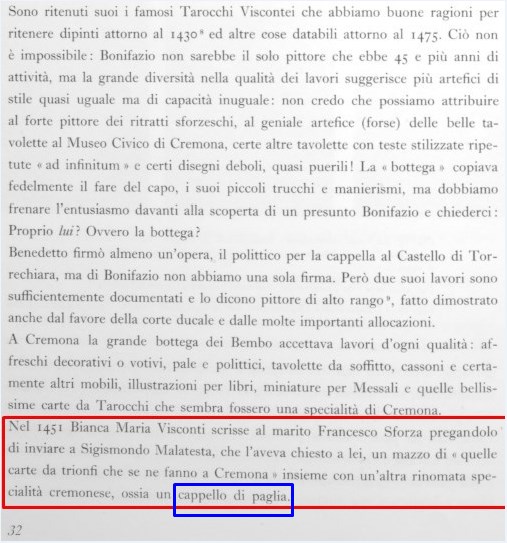 It doesn't really help in the expected matter. But ...

A "Cappello di Paglia" is a straw hat and a straw hat is at the table on the card of the Bagatello. Does this passage tell us, that the PMB Sforza cards are indeed the cards of 1451/52?

Added: I found an older discussion (2010) to this point ...
http://www.tarotforum.net/showthread.php?p=2402925
... I didn't remember the detail about the detail of the straw hat in the letter.
Huck
http://trionfi.com

Huck wrote: A "Cappello di Paglia" is a straw hat and a straw hat is at the table on the card of the Bagatello. Does this passage tell us, that the PMB Sforza cards are indeed the cards of 1451/52?

And speaking of Sforza's letters, wading through them for hours yesterday (looking for something else) I found two references to the hats - both from 'Registro n.5' (the webpage provides a summary in Italian and then the text in Latin or Italian, per the missive in question) http://www.lombardiabeniculturali.it/missive/registri/

While there is no mention of trionfo in either case (or anywhere in the letters as far as I searched), it does appear that Sforza wanted to bundle the gift of hats (as well as trionfi presumably) along with the condotta approved by Florence's Ten of War as well as the related money. I'm a bit confused on this point because elsewhere Sforza is directly asking Cosimo to provide funds for the likes of Ludovico Gonzaga, but in Malatesta's case his history was that of a direct condottiere of both the Pope and Florence, and the latter would presumably regard his employment elsewhere as a matter of state that required the Ten's blessing (Gonzaga was outside of their purview). All of this should be kept in mind when considering Giusti's gift to Malatesta (Giusti was in frequent contact with the Ten). But the context of June 1451 is this: Malatesta (and Colleoni) were previously marching on behalf of Venice on Sforza's encirclement of Milan in February 1450; the city of course capitulates before it can be relieved. Also note that in the mid-40s Malatesta was reducing Sforza's Marche on behalf of Pope Eugene IV (dead in the same year as Filippo Visconti in 1447), while Cosimo/Florence stuck with Sforza. Who could Sforza ultimately trust with so many immediate examples of duplicity (not discounting his own)?

As to your Q: the "Juggler" is a universal constant and thus the reaching for a hat as a personal joke to one of Sforza's allies, such as Malatesta, would be seem illogical when it would need to impart a universally understood message (at least in c. 1450 N. Italy among "lords"). And the straw hat in the PMB is barely recognizable as such - it's shabby shape can't refer to an expensive gift. But again, the context is that both of Sforza's regained mercenary generals - Malatesta and Colleoni - in the build-up to renewed hostilities in 1452 with Venice, is that both of those generals had already turned on Sforza (at least once), the previous year.

With that in mind, if the "Juggler" means anything it is that very duplicity. For that to be a correct reading then the "Juggler" would have to be understood not as a street entertainer but instead at least the equivalent of a court personage found in the court cards. Two indisputable iconographic details of the "Juggler" - not discussed in the literature as far as I know - do put the "Juggler" on the level of a court person (such as we'd expect of a mercenary lord of Rimini):
1. The hat (speaking of hats) worn by the "Juggler" is exactly the same hat worn by the surviving Brambilla court figures of the suit of coins (also of relevance is that in the CY the suit of coins has Visconti imprese, the radiate dove, not Sforza's). However disreputable (the ends of the hat droop, unlike in the Brambilla), this is a person from a court, not the street. And the suit of coins speaks directly to what Sforza, Colleoni, and Malatesta all principally engaged in: condotta / money. They are not proper lords but live by condotte.
2. The "Juggler" holds a scepter. This is not a street juggler's stick used to move objects about on a table (there is also no audience to entertain), as this scepter is identical in length and held against the shoulder the exact same way as all of the other court figures or trumps also holding a scepter. What is different is that the Juggler holds the scepter in his sinistra (with all those connotations) hand. In a word, duplicity is in play here.

Where does that leave the shabby straw hat, being slyly reached for with the free hand (the "Juggler" does not look at it)? Although nobility wore straw hats it was principally while hunting, or in the case of generals, while campaigning. But the straw hat, particularly a poor one, was mostly associated with the peasants of the field. The hat goes with the card immediately preceding the "Juggler" - the peasant-as-Fool. In a better sense, the popolo. Paired, the "Juggler" would be a court personage reaching for the Popolo - which would only mean sedition (again, sinistra). The PMB definitely has a strong Mirror for Princes aspect. The Hanged Man trump is merely the correction to sedition - to a traitor - one can expect from the Prince/Duke.

It was not just external alliances that could go bad - Sforza had all kinds of problems within Milan itself, principally Ambrogio Trivulzio who lead the faction against him (Trivulzio did not want to agree to the terms offered Sforza before his first ingresso in February 1450), and as an established lineage in the city, Trivulzio could claim to speak for the popolo. But there was also a host of Visconti from cadet branches with whom Sforza had to tussle with, per his letters (see link above), in which he has to instruct, admonish or threaten a variety of Visconti podesta, bishops, etc. located throughout Lombardy - just a few of the names: Sagramoro Visconti, Ottaviano Visconti, Esterolo Visconti, and my fav, Filippo Maria Visconti (yes, a relative shared the dead duke's full name). Sforza even has to make peace between various Visconti, in this cited case, a Pietro Visconti to pay his debt from Antonpietro Visconti (Reg. 8. 753. Francesco Sforza a Pietro Visconti, 1452 febbraio 8 Milano).

PS The Juggler was re/mis-interpreted in subsequent decks - I'm not going argue against that. But that is true for more than one trump in the PMB.

The two letters prepare the negotiations between Malatesta-Sforza, which led to a payment. It was in a situation of peace, so possibly no direct use existed for Malatesta from the side of Sforza. According Klaus Schelle: ("Die Sforza", p. 60) a rule existed, according which a condottiero wasn't allowed to fight against an earlier commissioner in 2 years following a condotta contract (a rule, which was often broken, adds Schelle). So, with his 25.000 ducats Sforza avoided, that Malatesta could fight against him for 3 years (September 1451 - September 1454) ... or at least only with a loss of personal credibility, with possibly negative results for future contracts.

A contract for one year.

Montefeltro ...
http://condottieridiventura.it/federico ... di-gubbio/
... is informed about the contract (July/September 1451), and seems to complain (likely he didn't like to be on the side as Malatesta, his personal enemy):

Before Montefeltro had complex contracts to Sforza and Florence. In October 1451 Montefeltro makes a contract
with Alfonso in Naples ... that's from the perspective of 1451 a change to the other side. I remember, that there were peace negotiations in Florence and these didn't go very well. I'm in the moment not sure about the date. But there seems no to be no actual war ... possibly cause the time expected the emperor crowning in Italy. In the following period Montefeltro did fight against Florence, but not directly against Sforza and Milan.

The future emperor arrives, meets his bride and they made station in Rome, where they marry and both are crowned as emperor and empress. (mid of March). Then they travel to Alfonso in Naples, where the celebrations take place.

In (early ?) April Malatesta seems to take part in the celebrations:

Montefeltro attacks Fano, and that's Malatesta's territory, possibly using the absence of Sigismondo. End of the month April Sforza in Milan declares the intention to have a new war with Venice. Likely Sforza is also disappointed by the affronts of Emperor Fredrick III.

First battles Venice-Milan are recorded for June 1452. Malatesta doesn't appear in these battles. In August he has another contract with Florence ... likely the direct engagement with Sforza is finished with this, Florence takes the payment. This seems to be the state, when Sforza writes the letter from the battlefield in October 1452.

In August 1452 we have a battle between Aragon in Naples and Florence., Montefeltro appears on the victorious side of Aragon. 500 Florentine cavalli are captured at that opportunity (it's the only participation of Aragon and Florence in the battle lists). Montefeltro stays in the service of Alfonso, mostly occupied to attack single cities, till the peace of Lodi.

Malatesta has occasionally contacts to Venice and Aragon, but it leads not too much till the peace of Lodi. .
Huck
http://trionfi.com