The Ancona Arch of Trajan and the CY “World”

The Ancona Arch of Trajan and the CY “World”

#1 by Phaeded
Against the view that an artist’s whim chose a highly peculiar landscape with a distant view of a coastline, uniquely framed in an arch (all other 15th century "World" trumps showing a tondo), I’m still proposing that the CY “World” reflected the geopolitical circumstances then prevailing around the time of its production in c. 1441. Those circumstances are namely that Sforza was affirmed in his lordship of cities in the March of Ancona in February 1439 by Pope Eugene IV (and revoked and attacked by the same in 1442, but irrelevant here, except perhaps as a possible terminus ante quem for the CY), and allied to Visconti the subsequent year in 1440, as honorarily proclaimed on the Pisanello medal made for Sforza in that year. Despite the honorary familial designation of “Vicecomes” (Visconti), Sforza was lord of Ancona, and its symbols along with the Attendolo/Cotignola hereditary stemmi defined him. No need to recount the quince/pomegranates nor personal impresa of the fountain that occur in the CY, as that and all of the above is well-trod territory. But what of that unique arch?

What I’d like to interject is that Sforza’s social standing, appropriate for marriage to Visconti’s only daughter in 1441 (along with the aforementioned honorific Vicecomes), was somewhat due to his recently acquired fiefdom of Ancona. That port city’s most recognizable symbol, looking over the harbor that allowed it to somewhat compete commercially with Venice in the Adriatic, was the Triumphal Arch of Trajan, erected by the Senate and people of Rome to commemorate from where Trajan departed for the ultimately successful war against the Dacians in 116 CE (an episode which is commemorated in the bas relief of Trajan's column in Rome). The arch and harbor today:

Giving the growing interest in Roman antiquities in the early Renaissance, the arch would have been of interest to humanists, but became especially renowned due to the most famous antiquarian of the age who happened to hail from there, Ciriaco (de' Pizzicolli) d’Ancona. Regarding his special interest in arches, stemming from this one in his hometown and the age’s obsession with Roman triumphs in general (from which Petrarch named perhaps his most famous work), I’ll excerpt relevant passages from this relatively new study: Jasenka Gudelj, “The Triumph and the Threshold Ciriaco d’Ancona and the Renaissance Discovery of the Ancient Arch”, «Roma moderna e contemporanea», XXII, 2014, 2, pp. 159-176.


Ciriaco’s interest in antiquities and the latin language, according to his biographer Francesco Scalamonti, was triggered by examination of the arch of Trajan in the early 1420s, as part of revitalization of the port of Ancona sponsored by the Cardinal Gabriele Condulmer, future Pope Eugenius IV (1431-1447). as Augusto Campana and Stefano Casu have demonstrated, Pizzeccoli’s notions of the arch strongly influenced renaissance visual reconstructions, including the idea of an equestrian statue of the emperor on its top, similar to the city’s protector saint George, sculpted on the Loggia dei Mercanti by Giorgio Dalmata (163-164)


The key here is the arch was already receiving attention in the 1420s from a powerful cardinal, ironically Sforza’s future nemesis. Regarding the local arch parallel, unfortunately Ancona’s Loggia dei Mercanti (also near the port and arch) has been damaged and restored on more than one occasion, but the current site was begun in 1442 by architect Giovanni Pace, and therefore under Sforza’s rule. The current mounted figure over the main arch is not St. George but an equestrian statue of the Roman emperor Trajan (that looks thoroughly unclassical and more like the sword-bearing medieval knight behind the PMB’s Justice trump). The St. George would of course most likely also appear as a mounted knight, and if the later Trajan statute matched its disposition, it matched the left-facing mounted knight shown on the CY “World”. The Trajan statue today: 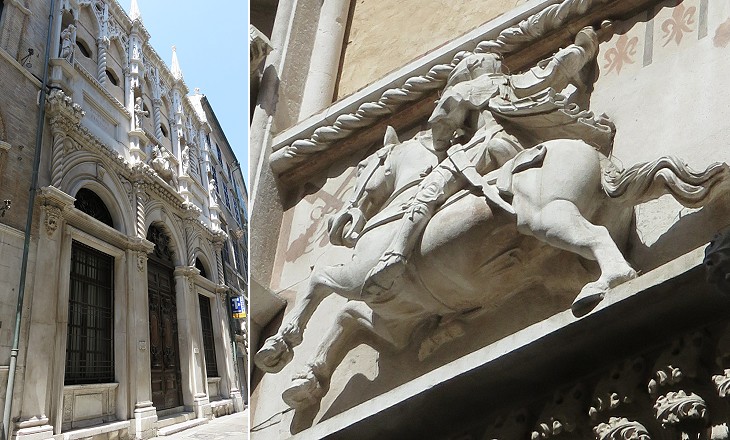 Ciriaco even introduces the notion of arches being surmounted by an allegorical figure bearing a trumpet-like instrument as we find in the CY “World”, this particular arch restored at a date quite close to the CY:


In Zadar, the capital of the Venetian Dalmatia, Ciriaco described the antique arch decorating the so called maritime gate erected by Melia Aniana to honor her husband, which at the time was surmounted by a sculpture of a one of Neptune’s tritons trumpeting. The arch was restored to its former beauty in the year of 553rd olympics (i.e. 1434) by Ciriaco’s friend, the learned abbot of the Benedictine monastery of saint Grisogonus, petar Kršava21. (166)

Another pre-1440 arch for one of Sforza’s condottiero-prince contemporaries involved Ciriaco and Alberti as well:

It seems that Ciriaco was also present in Ferrara when a pedestal for the equestrian monument to Niccolo III d’Este (1393-1441) called the Arco del cavallo was erected, with Leon Battista Alberti (1404-1472) acting as a judge. The solution of a triumphal arch surmounted by an equestrian statue, as discussed by Casu, is similar to Ciriaco’s idea of the original form of the arch of Ancona. (173)

While the CY “equestrian” is within the arch and does not surmount it (Fama does), it can be argued that is because it was depicting a living triumphator (Sforza) and not a deceased, historical exemplar.

Ciriaco likely even influenced the triumphal arch built in Naples, after the CY, but oddly matching the CY “World’s” narrow aspect, the flanking four engaged columns being nearly identical to the Ancona example, although the author argues even closer to the Pula arch in Venetian Istria, also studied by Ciriaco (ibid, 175).

Further echoes of the arch can be found in the symbolism of the towered gate of the rebuilt Visconti-Sforza castle in Milan, the building site visited by King Rene himself during the one year he finally intervened for Sforza against Venice in 1453 (Evelyn S. Welch, Art and Authority in Renaissance Milan, 1995: 187-188). Unfortunately this tower was destroyed (the reliability of the modern restoration is unknown), but we do know what Rene saw was the marble design around this main gate, complete with Sforza’s stemmi.

The enduring fame of the Ancona arch in the 15th century is in evidence in Pinturicchio’s famous cycle of paintings in the Piccolomini library in Siena, where Trajan’s arch is placed adjacent to Pius II’s head, celebrating the (failed) departure of the fifth crusade from Ancona’s harbour as a neo-Trajanic enterprise in 1464. 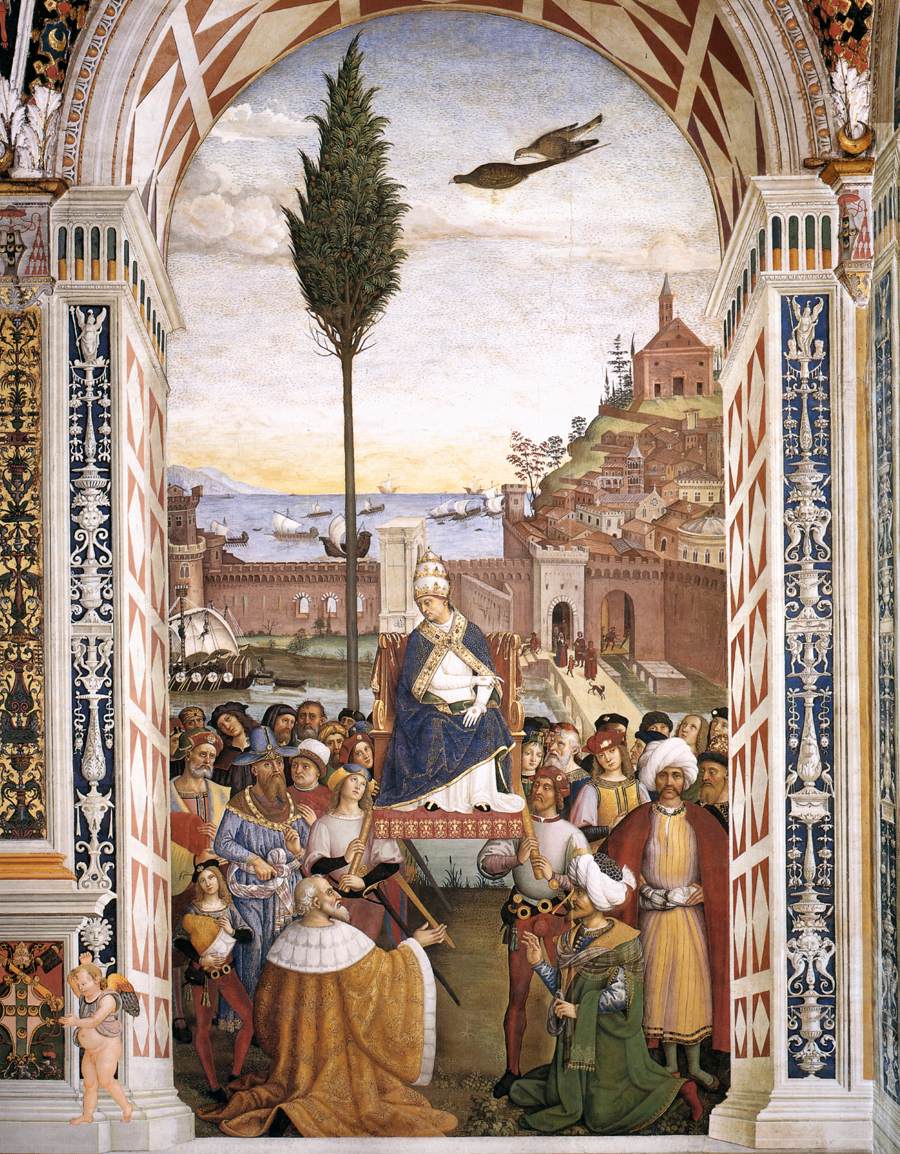 As for the CY “World” trump somehow expressing both Fama and Prudence, perhaps the key to that is literally inscribed on Trajan’s arch; again: PROVIDENTISSIMO PRINCIPI – “the prudent prince” (Fama proclaiming the renown of the same in the CY). The 16th century engraving by Serlio of the Ancona arch showing the inscription, not otherwise clear in photographs:

Providence and Prudence are etymologically identical: Prudens [Prudenzia] is in fact a contraction of providens, pro in sense of before, in front of, foreseeing. Aquinas makes this explicit in his Summa Theologiae in his sixth part of article 6 on whether prevision/providience is part of prudence:


Both contingency and purpose are implied in the notion of human providnece, which signiofiesd looking aheqad to soemthing distant to which prsent occurences are to be adapted. Accordingly providence or prevision is part of prudence.”[ ST, 2a2ae. 49,7] (Thomas Aquinas, Summa Theologiae: Prudence v. 36, Latin and English Edition by Thomas Gilby, 1974: 77).

Every humanist of the age would have read this famous arch as extolling the prudence of Trajan.

I accordingly posit that the CY arch, mounted by Fama, proclaims the virtue of prudence of the prince depicted below the arch, Sforza, on his way from his March of Ancona, home to the famous Arch of Trajan, that lay to the south/right, and from there up the Adriatic coast to the Po River, to the dowry city of Cremona, site of his wedding to Bianca Visconti (thus the knight in transit, left-facing, to the north). Fama above her prudent prince, is not very different than any of the virtues/gifts of the gods imparted to their “children” in Christine de Pizan’s L’Epistre Othéa (her famous "mirror for princes" to the French court). In fact the exact same scalloped cloud nimbus, used to denote divinity, is used by both the French and Lombard artists (and throughout the Visconti Hours as well); e.g.Venus and Mercury here (Harley MS 4431, f. 100r and f102r) , juxtaposed with the CY “World.”


And yet the CY "World" does not isolate the prudent prince below Fama nor even just show him across the Po River from Cremona, but insists on a somewhat detailed depiction of the Adriatic coast – why? Again, I believe the answer was geopolitical – our Florentine Giusti was himself in the Romgana with a Papal-Florentine army assisting Malatesta take Forli in 1441 (it was during this campaign that the tarot was actually given to Malatesta) against the Milanese allies organized under Piccinino. Equally important, Obizzo da Polenta, from the family traditionally in control of Ravenna, was forced in 1438 by Piccinino, to ally himself with the Visconti against Venice. The latter sent a fleet which conquered Ravenna without opposition, putting an end to the Polentani seigniory in February 1441, under our familiar Venetian provveditore Marcello. The Sforza-Bianca wedding was eight months later, and included the Romagna-facing Cremona – a would-be bulwark against Venice, if not launching point for future campaigns. The wedding was itself a precursor to the the Peace of Cavriana (just outside Cremona), concluded in the following month of November, in which Sforza was the arbiter of the peace settlement between Visconti and Venice. Without this context the CY “World” landscape vignette makes no sense in its specific peculiarities.

In conclusion, we have a famous Roman triumphal arch in Sforza’s primary fief of Ancona that literally says “PROVIDENTISSIMO PRINCIPI” on it. It is not a stretch to think that such a monument, made especially famous by Ciriaco, was appropriated as an identifier of Sforza’s power and could be coupled with his stemmi/imprese in the CY “World” trump. That trump’s meaning must be tied to the action below Fama featuring a knight, extolling his prudence as argued here (evidenced by the forthcoming peace, among other Sforza feats). By applying that virtue to a specific “prince” (the fame of the prudent prince, Sforza), it thereby became further isolated from the other virtues, which are purely allegorical without a specific real world attachment (hence the oft-asked "where's prudence?" in the CY). Prudence was especially associated with rulership, by Aquinas, et.al., so it is not surprising to see it visually linked to a prince in the CY.

Re: The Ancona Arch of Trajan and the CY “World”

#2 by mikeh
The issue raised in the last paragraph of Phaeded's post, about the CY World card's representing Prudence, is discussed in a series of posts in another thread (rather off-topic, but it came up there), starting with mine at viewtopic.php?p=21354#p21354, in a short couple of sentences singled out by Phaeded in the post following (#97 in that thread) and discussed further by him in that post and in successive posts by the two of us,