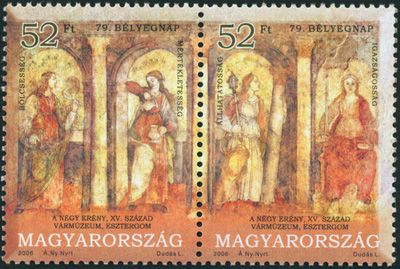 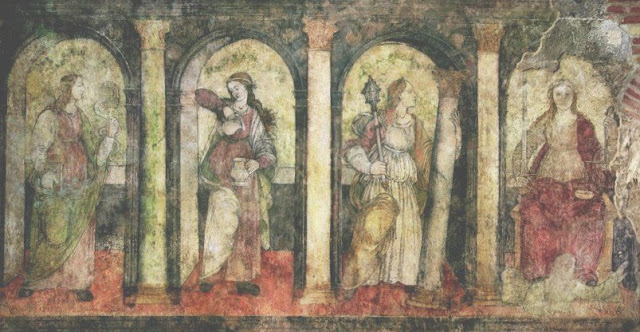 As the report below shows, that there are two different theories to this production. The earlier theory assumed, that the production took place in 1494/95 by a Florentine master "Albertus".
The later theory assumes, that the young Botticelli was active with this object "before 1470", under the commission of Estzergom archbishop Johannes Vitez (archbishop since 1465), the uncle of Janus Pannonius, who had studied in Ferrara (back in Hungary in 1458).

Though first a few things about the general situation.

The fresco of virtues in Esztergom

The fresco representing the Cardinal Virtues in the castle of Esztergom is the only survived work of art of monumental painting of the Hungarian renaissance, which was made under the immediate influence of the Italian quattrocento. Esztergom Hungarian town which is 50 km far from the capital and its royal court has been the religious centre of Hungary since the year 1000 and until the middle of the 13th century was the royal residence as well.
The building of the medieval palace, where the archbishop of Esztergom had lived since the 13th century and which was situated next to the medieval St. Adalbert Cathedral was modelled and enlarged in Renaissance style by archbishop Johannes Vitéz, after his election in 1465. Although the palace was seriously damaged in the course of the Turkish occupation during the 16th and 17th century, contemporary description completed with the archaeological finds makes possible to us to imagine the former magnificence of the archbishop's residence. The most reliable account was given by the famous Italian humanist, Antonio Bonfini, historian to king Matthias Corvinus, who, after his patron's death in 1490, moved to Esztergom, to the court of Ippolito d`Este, archbishop of that time, in company of the widowed queen Beatrice of Aragon.

"He had a big dining hall built the walls of which were decorated with the portraits of Hungarian kings and Scythian ancestors. In front of the dining-hall on the Danube side he had a marvelous red marble loggia built with a double balcony. The dining-hall opened into the vaulted chapel of Sibyls decorated with their images. He also set up cold and hot bathing boxes. On the Danube side there was a double garden surrounded by a colonnade with terrace. Between the two gardens archbishop Vitéz had a round tower erected with dining and living-rooms decorated with colored stained glass windows. Where Johannes Vitéz mainly lived he had a fine view of the Danube opening out before his eyes over the garden. It was a suitable place for meditation and philosophising." (Antonio Bonfini/1427-1503/, in Rerum UngaricarumDecades, ca. 1495).


Bonfini went to Buda for the first time in 1486, at the invitation of Matthias. At first he served as reader to Queen Beatrix. Later Matthias commissioned him to write Hungary’s history from the time of the Huns. Bonfini’s great work, Rerum Hungaricum Decades (“Ten Volumes of Hungarian Matters”), was incomplete at Matthias’s death in 1490 and was finished at the urging of Vladislas II. Its first full publication was in Basel, Switzerland, in 1568, while Gáspár Heltai’s Hungarian version, Chronika az magyarok viselt dolgairól (1575; “Chronicle of the Hungarians’ Past Deeds”), was printed in Kolozsvár, Transylvania (now Cluj, Rom.). With this work, long considered definitive, and his other writings and translations, Bonfini exerted a powerful influence on Hungarian historiography. Vladislas made him a nobleman in recognition of his work.
quoted from http://www.britannica.com/biography/Ant ... #ref895624

The painted decoration of the renaissance palace has almost totally destroyed. Only fragments were found, most of them on the first floor of the medieval castle tower including the representations of the four Cardinal Virtues with the remains of the allegories of planets and zodiac signs in rather bad condition.
The iconographical programme of the room was reconstructed convincingly by Antal Lepold in 1938. According to him, the walls were decorated with seven Virtues including the theological and cardinal ones as well, the seven literal arts, the signs of the zodiac and the triumph of seven planets in compliance with the latest theoretical texts, such as principally with Filarete`s Trattato dell `Architettura written between 1460 and 1465 by Francesco Sforza, duke of Milan. Filarete`s treatise was well known in the humanist circle of the king who had it translated from Italian to Latin for his royal Corvina librarv in Buda. "Filarete suggests that in an ideal palace the walls of the hall should be decorated with paintings of Virtues, famous men, ancient gods, heroes and sibyls. The vault should resemble the planets, fixed stars and all the heavenly signs." According to the contemporary descriptions, similar painted decoration could be seen in the royal palace of Buda, made during the reign of king Mathias and also king Wladislaw II. The correspondence of virtues and planets can be also found in Dante's Divine Comedy, so their presence in the decoration of the same room isn't surprising.
Jolan Balogh, a specialist in Renaissance art, has dated them in the 1490s and associated them with "Magister Albertus pictor" from Florence who was in Hungary between 1494-95. Presumably he belonged to the circle of Filippino Lippi. It is difficult to say more because none of the artist's works are known.
Balogh's opinion was conceded by the Hungarian art historians, also during the great exhibition of Hungarian Renaissance "Matthias Corvinus and the Renaissance in Ungarn" in 1982 in Schallaburg, Austria, although another art historian, Maria Prokopp has publicated her different opinion containing other convincing aspects for the dating and attribution based on stylistic connection between Fortitude in Esztergom and Filippo Lippi's Salome at Prato in her study of 1975. Prokopp claimed that the archbishop Johannes Vitez, seemed the person to have ordered these frescoes for his studiolo in the second half of 1460's.

***********
Janus Pannonius, a pupil in Ferrara in the time of Leonello and Borso. He was the nephew of Johannes Vitez, archbishop in Estzergom (above mentioned) since 1465. He participated in the same rebellion (1471) and died 4 months before his uncle (1472).
https://en.wikipedia.org/wiki/Janus_Pannonius

Sentence at his graveyard, which he had chosen himself (according German wiki)
https://de.wikipedia.org/wiki/Janus_Pannonius
„Janus ruht allhier, der als erster die lorbeergeschmückten Musen von Helikons Höhen an die Ufer des heimischen Ister gebracht hat.“
He claims, that he was the first, who brought the laurel-crowned Muses of the heights of Helicon to the river Ister (= Danube). Estzergom is located at the shores of Danube.
One has to remember, that Ferrarese art in the times of the late Leonello and Borso had the theme "Muses", as Leonello had desired pictures of them for his studiolo. It was just also the time, when Janus had been in Ferrara (arrived 1447, back in 1458).

The other foreigner [the other mentioned was the above noted Antonio Bonfini], Galeotto Marzio, was also Italian. He became acquainted with the poet Janus Pannonius in Ferrara [1447] and visited Hungary several times, staying for long periods. For a time he was librarian to the Royal Library, the Corvina. He also lectured at the University of Bologna. On account of his philosophical views he had to appear before the Inquisition, and it was King Matthias who saved him. A versatile person, he wrote on widely differing subjects. His manuscript, written in Latin, Of the Remarkable, Wise and Amusing Sayings and Deeds of King Matthias, was published posthumously (Vienna, 1563). It is a collection of anecdotes and personal reminiscences of the court of Matthias as seen by a foreigner, frequently witty and entertaining, and always praising Matthias as the true Renaissance Prince, or paying tribute to his eloquence and depth of knowledge. The work displays definite literary ambition, and it is also remarkable as a source of information on the daily life in the court of King Matthias. As Galeotto did not know Hungarian, he could report only business conducted in Latin in the court, yet he did not fail to remark that the noble Hungarian lords and the King were best entertained when singers praised the heroic deeds of their forefathers in their native tongue. Moreover, Matthias’s human weakness also emerges from the anecdotes (e.g. he was an excellent orator in Latin: nevertheless Galeotto once caught him using the relative pronoun in the wrong gender. The king immediately corrected himself, as Galeotto faithfully recorded, yet the modern reader cannot suppress a smile; this mistake is made by many Hungarians, since Hungarian has no grammatical gender). Galeotto, unlike Bonfini who died in Hungary as a naturalized Hungarian and had been ennobled by Matthias, led a life shared by many Humanist scholars; he stayed in various courts* as a guest, whose well-read and often amusing though superficial conversation was a contribution to the entertainment of the court, and a tacitly agreed return service to his royal host.

(will be proceeded)
Huck
http://trionfi.com