Lorredan wrote:The black and white Death as Cardinal that was posted by mmfilesi has some interesting connections.
...
So I see Huck's explanation of Chess and Death as a Bishop who travels across the board diagonally as just perfect.

Interesting aspects, Lorredan.
Real cardinals got - in the relevant time - often great military missions. One example is the monster Vitelleschi, which first was used by pope Eugen and then executed (1440), or Cesarini (death at battlefield 1444 in Nicopolis, Bulgaria) and St. Capristanus (1456), which organised crusades and battles. Much later Cesare Borgia took a start as a cardinal and was feared in all Italy. So the cardinal as "Karnöffel" (which meant an "aggressive beating man") wasn't a bad idea.
Unluckily we don't know precisely, when this death=cardinal association was used (in other cards="when this card was made") and also we don't know, when precisely the change from slow bishop to quick bishop (= modern use) was done at the chess board.
Huck
http://trionfi.com

#12 by mmfilesi
in the dances of death, at least in the engravings of Holbein, death is represented as Pope when take the abbot.

#13 by mmfilesi
I found a color image, but he is very annoying watermarks. Anyone have a color copy without spoiling? 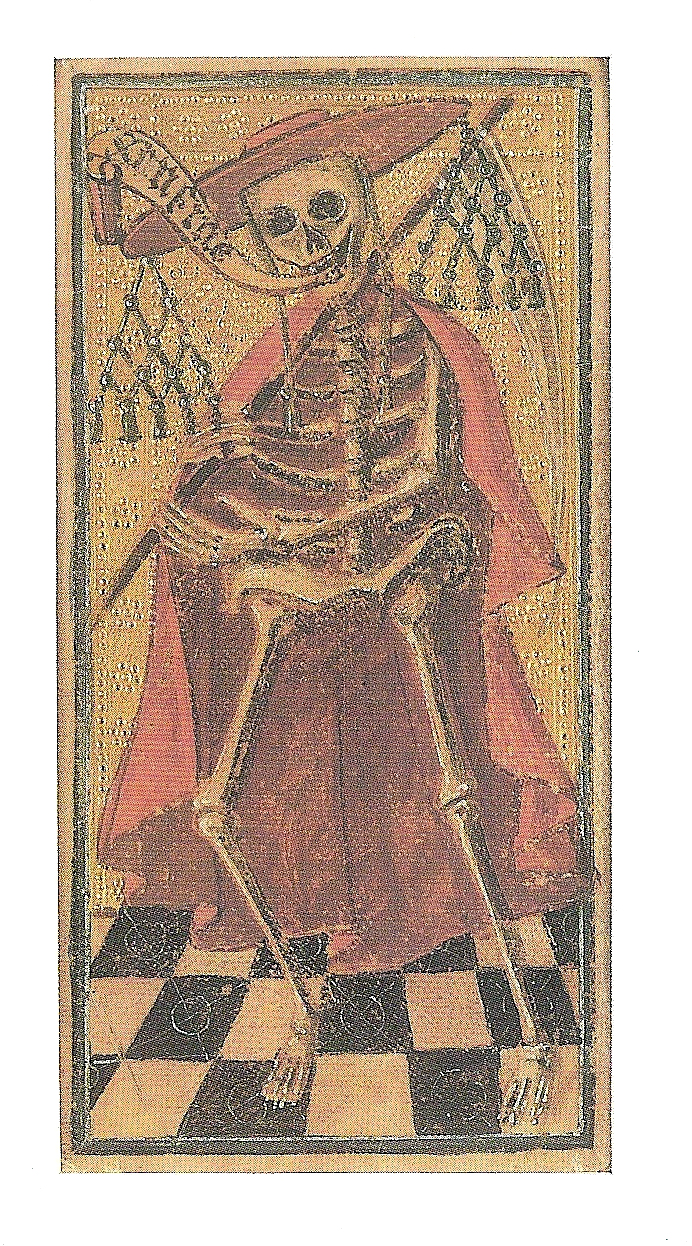 This is the best I have. The colours are not as rich, but the resolution is higher.

In the mouth says "san fine." Kaplan says that amounts "Sine fine", without end. This is an idea associated with the dance of death. Eternal death.
When a man has a theory // Can’t keep his mind on nothing else (By Ross)

Not a cardinal, but an altar dedicated to the departed. 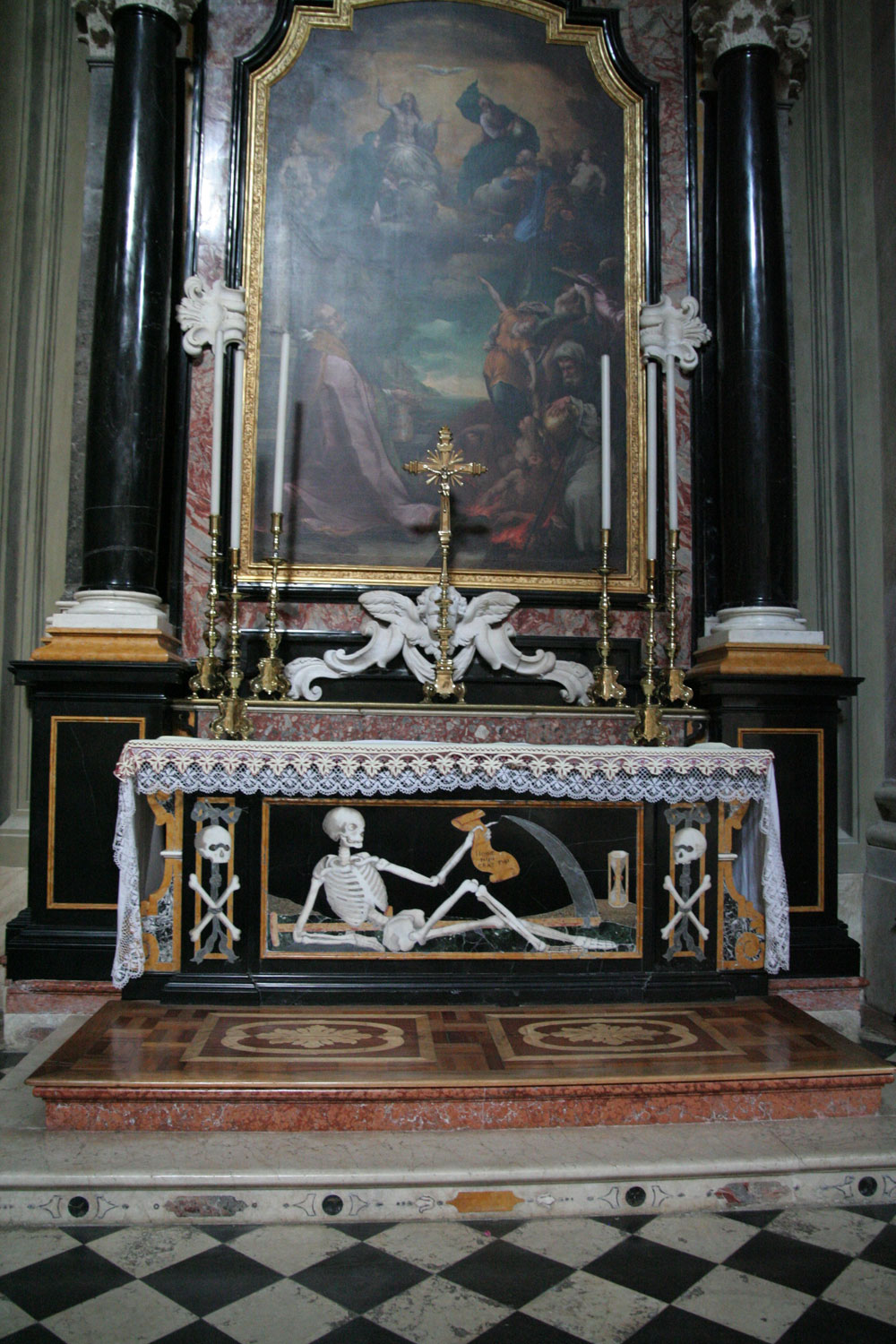 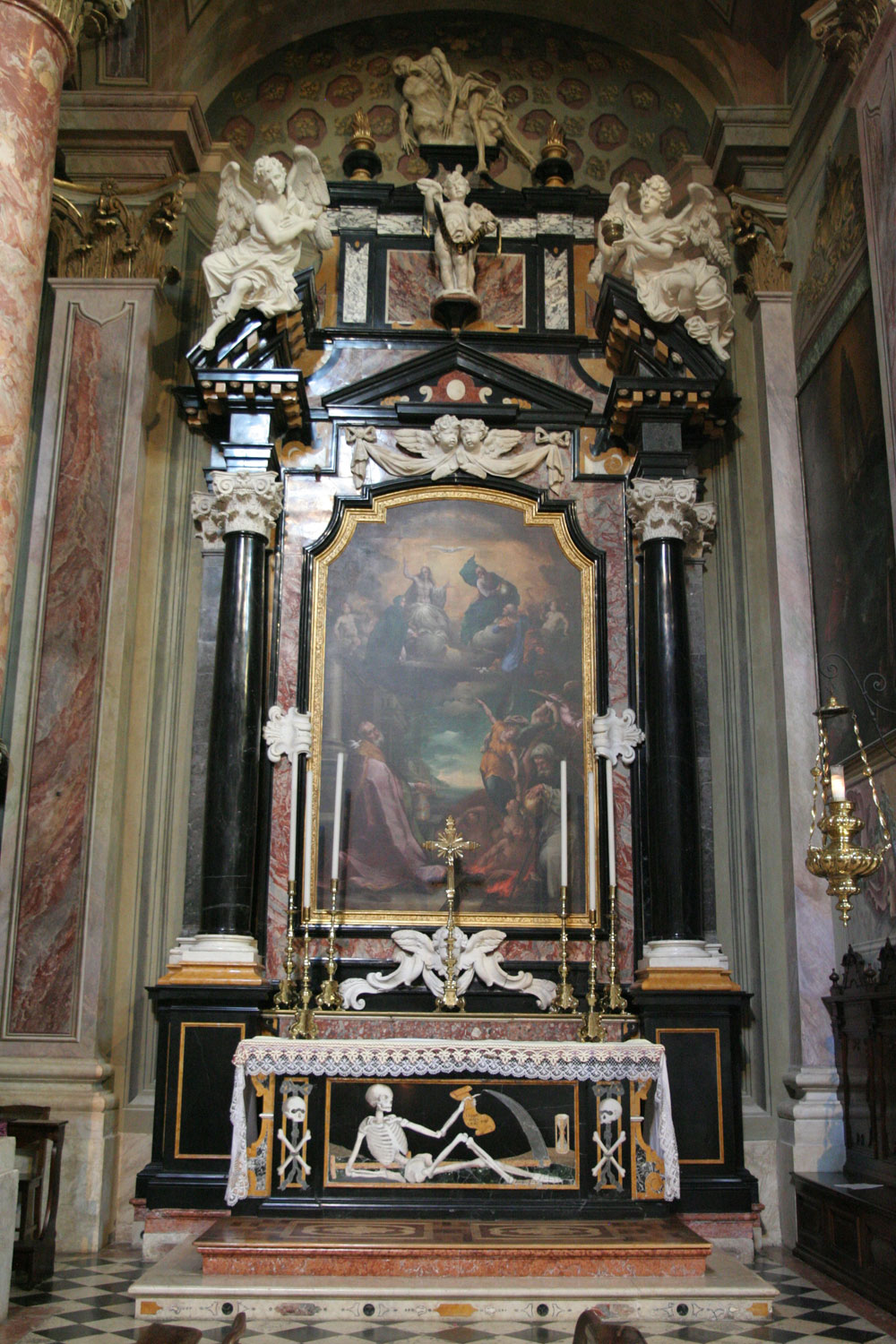 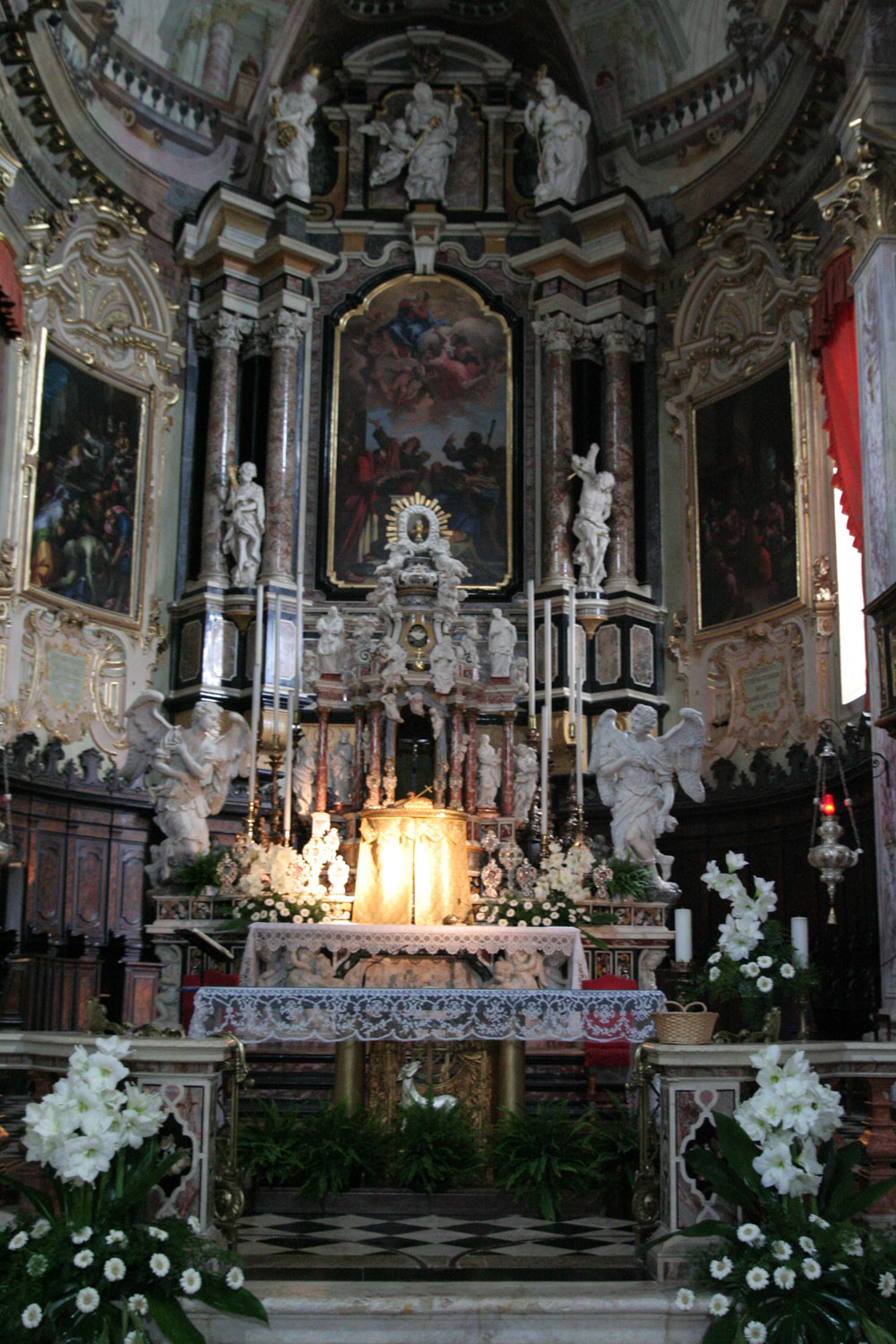 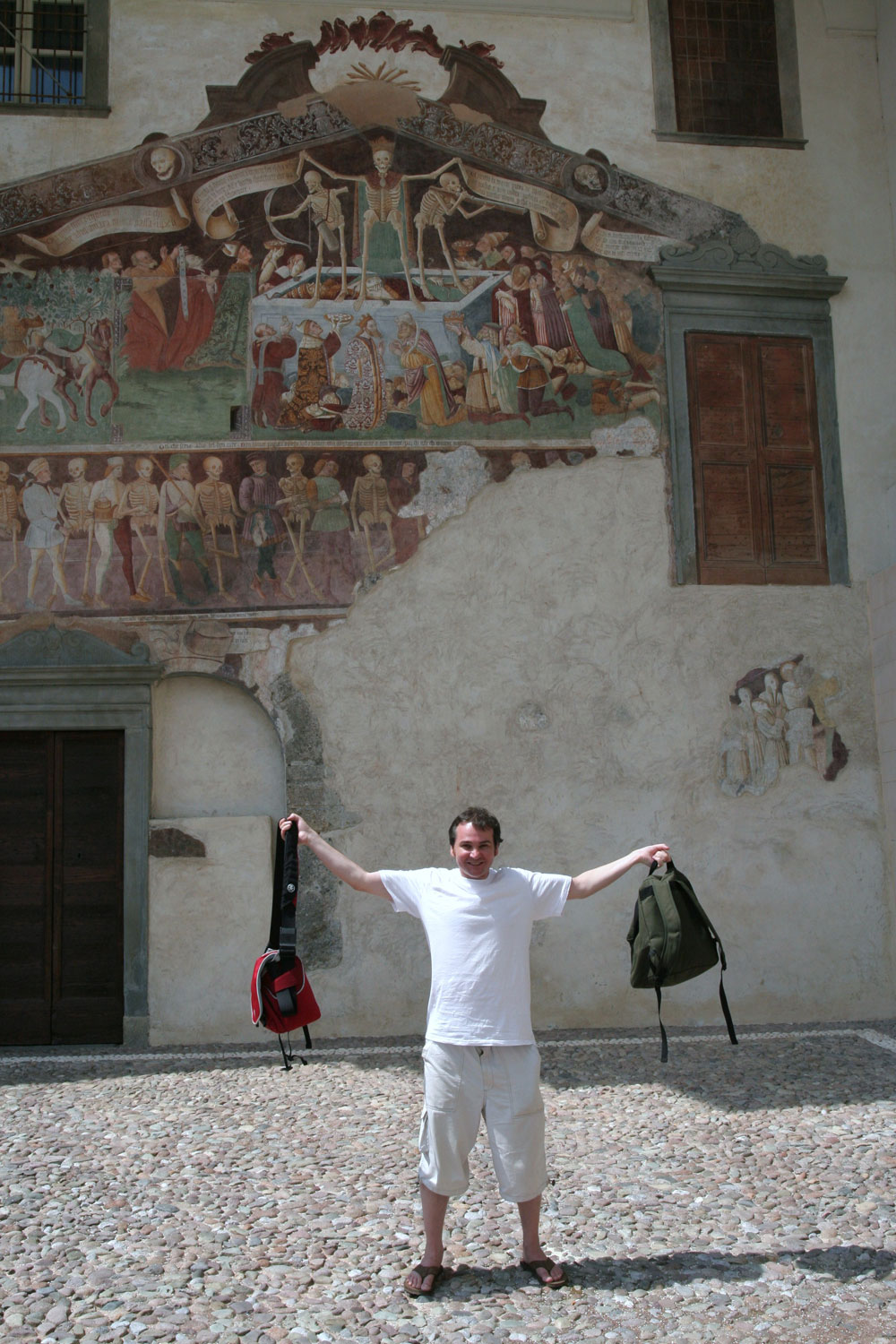 That's me in front - just for perspective. 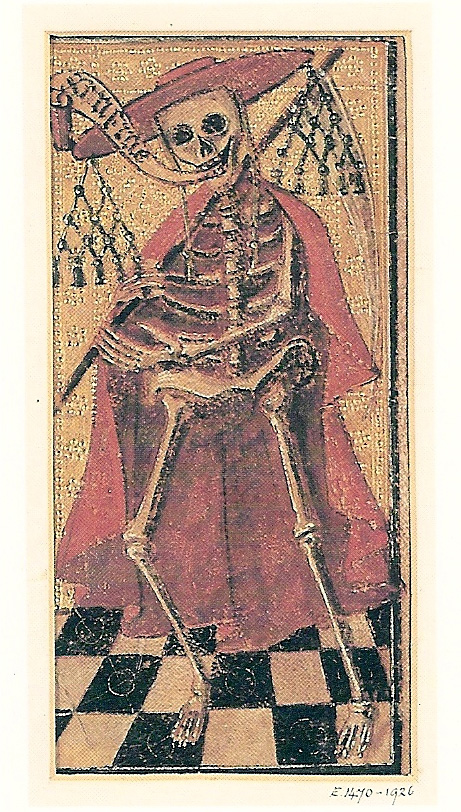 Another interpretation of the words on the scroll is "son fine" (for "sono fine") - "I am the end".

LOL! Its a strange dead with two bags, very fun!

mmm... sounds more reasonable, yes.
When a man has a theory // Can’t keep his mind on nothing else (By Ross)
SteveM
SteveM

#19 by SteveM
Given a christian interpretation: those that die in Christ are 'without end'
----
***

over stinky Styx
I dance with skinny Charon
in pink silk boxers
to the sound of Stravinsky
playing something out of tune
Immature poets imitate; mature poets steal; bad poets deface what they take, and good poets make it into something better, or at least something different.
T. S. Eliot
SteveM
SteveM

"Therefore does St. Paul say of himself, If I be offered upon the sacrifice, and service of your faith, I joy, and rejoice with you all", that is, it is a just occasion of our common joy, on your part, and on mine too; and therefore does St. Augustine say in his behalf, whatsoever can be threatened him, Si potest vivere, tolerabile eat, Whatsoever does not take away life, may be endured; for, if it could not be endured, it would take away life ; and, Si non potest vivere, says he, If it do take away life, what shall he feel, when he is dead ? He adds the reason of all, Opus cum fine, merces sine fine; Death hath an end, but their reward that die for Christ, and their peace, that die in Christ, hath no end. Therefore was not St. Paul afraid of melancholy apprehensions, by drawing his death into contemplation, and into discourse; he was- not afraid to think, nor to talk of his death ; but then St. Paul had another end in doing so here, (which is our last consideration) to make the deeper impression in them, to whom he preached then, by telling them, that he knew they should see his face no more."

The works of John Donne: with a memoir of his life by John Donne

The dressing of the skeleton in cardinals clothing represents one who has died in Christ, who thus 'hath no end'.
Immature poets imitate; mature poets steal; bad poets deface what they take, and good poets make it into something better, or at least something different.
T. S. Eliot