The tarot and the tarasque...

#21 by mmfilesi
The Tarascan and Cucafera (a kind of Tarascan) in Spain were also used to frighten children. As the possible "Krampus" of the Cary sheet

http://encina.pntic.mec.es/~agonza59/peninsulares.htm
When a man has a theory // Can’t keep his mind on nothing else (By Ross)

#22 by mmfilesi
The legendes of the tarasca in Santiago Voragine (c. 1256). Sorry, but i cant translate this long text

mmfilesi wrote: I dont know whats hapen with Chorpus Christi in Avignon arround 1475-1500. My knowledge of French is not enough.

Seems to have started in Liege much earlier.

#24 by mmfilesi
Perfect. Thanks Hugh.

http://books.google.es/books?id=5AGgAAA ... CBcQ6AEwAw
When a man has a theory // Can’t keep his mind on nothing else (By Ross)
mikeh
mikeh

If Italians didn't know the derivation 50 years later, maybe it's because the word is Arabic, and describes a paraticular innovation in the rules that occurred around 1505 or so, distinguishing the game from Triumphs, and with an Arabic basis. This is what the Grand Robert Dictionaire de la Langue Francaise says, roughly. I'll get the details.

yes. Its a posibility. I read somewhere (Andrea Pullet?), Which could come from an Arabic word referring to the decoration with holes, like the skin of an orange, which in Arabic is said like tarot (or similar).

However, this is rare. Between 1442 and 1505, never speak of "tarot" or "taraux" or "taroccho" ... It the game of triumphs. That is, a new word, the late fifteenth century, early sixteenth century. Long ago the Arab origin of the cards (mid, late fourteenth century) has passed.

I'm not talking about what you read about the skin of the orange, the little dents put in the metal. I am talking about a rule change, associated with particular decks around 1505, so that the producers introduced a new word to describe the decks sold to be played with these new rules, a word that described the rule. Unfortunately I do not have access to a copy of Game of Tarot to see if Dummett mentions such a rule. By your time line, the rule change would have been around the same time in Avignon and Ferrara, so we don't know where it started. The cardmakers, on this theory, took a word from Arabic--it seems to have been in use in Italy and France for some time, "tara," meaning "deduction"--and gave it an "o" on the end instead of the "a."

This theory, as I said, comes from the Grand Robert--2nd edition, 1985, volume IX, to be precise; It is a huge work, 10 thick volumes of small print and large pages, no casual job. I get this reference from J. Karlin, http://jktarot.com/faq2.html. To make sure I get it right, here is a copy of the entry in the book. All you actually need is the first paragrph: 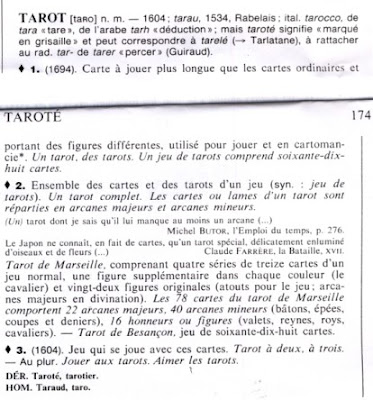 This book is saying it comes from the Arabic word "tahr," meaning the same as "deduction" in French. What rule would it correspond to in tarot? Karlin suggests that it is the rule that the dealer has the option of discarding a certain number of cards, removing them from participation in the trick-taking game that follows. The dealer "deducts" these cards from his or her hand. I don't know if that is the only rule that could possibly correspond to the word. When the score is added up, are there deductions, say, for losing the Bateleur or playing an illegal card during the hand? Karlin's suggestion makes the most sense to me.

The Arab word, according to Robert--although now spelling it "tarhah"--also gives us the word "tare," meaning "part removed." Here are the entries for "tare" and also "tare" with an accent acute on the last e. I apologize for the quality of the copy; again, only the first paragraph is important for our purpose:

I include so much because maybe something will click with you from Spanish. Notice the year it gives for a recorded appearance of the French "tare"--1318. Then in 1460 it gets a new application, so there's some activity with the word. That's in France; I don't know about Italy or Spain.

"Tare" even exists in English. Here is what my Webster's New World Dictionary, 1967, says:

n. Fr.; It. & Sp. tara; Ar. tarhah < taraha, to reject. 1. The weight of a container, wrapper, box, truck, etc. deducted from the total weight to determine the weight of the contents or load. 2. the deduction of this.

There is a little dot under the first h of both Arab Words, and the t of the second one. Perhaps it is to distinguish it from another sound written with an h or t.

#26 by mmfilesi
Thank you very much for speaking in this thread, Mikeh.

b) In the fifteenth century in Italy, called the tarot "game of triumphs" in connection with the festivals organized with triumphs (popular word derived of Petrarch, of course).

c) In Avignon and Provenza the protagonist of the parades of triumphs (popular) is the Tarasque. This confirmed me by specialist and in this forum I uploaded a piece of an article where he talks about tarasque processions in Avignon in 1466.


d) Well... The Italian nobles (Visconti-Sforza, Este, Medici ...) called their cards "game of triumphs" because their festivals were "Procession of triumphs". The cardmarkers French called their cards "game of taraux", perhaps, because their festivals were Tarasque (pronunciated taRask) processions. (And guilds, as cardmarkers, actively participated in the processions popular)

e) Now, we need to bolster the hypothesis, confirmed its possible the jump tarasque - taraux, taking into account the particularities of French language in Provence in the early sixteenth century. I have written to a specialist (a professor of medieval French). I am waiting for her reply.
When a man has a theory // Can’t keep his mind on nothing else (By Ross)
mikeh
mikeh

#27 by mikeh
Your (a) is crucial. There has to be something specific to tarot around 1505, in either Italy or France, because the word tarot, or tarau, or tarocchi, doesn't appear before then in either place. Tarasque processions had been going on for a while, since at least 1466, with no indication of any name change from "Triumphs." Here we have to remember that before 1505, at least in Italy, the name used was "triumphs," a term that applied to several different games and types of cards, their common denominator being that they all had special cards with special points and powers to take tricks. For example, the Sola-Busca is a Triumph deck, but not a tarot. Whether the PMB or the other luxury decks count as "tarot" I don't know; they weren't called "tarocchi" at the time. Technically, I think they should be called "proto-tarot."

What happened in 1505 or a little before? Here are the possibilities advanced:

(1) Just before or in 1505, "Triumphs" as a game with the Devil card (and the other usual cards associated with tarot), reached places with Tarasque processions, the name was changed to "tarot" so as to associate the two, and this name-change quickly was adopted elsewhere, including places that knew nothing of Tarasque processions, so as to distinguish these decks that had "Devil" cards from those that did not.

(2) Just before or in 1505, a cardmaker with a relationship to the town of Taraux in France had the bright idea of calling by a special name the particular type of Triumph cards we know as "tarot," and this name-change was quickly adopted in all the major places using these decks. (Why just then? The only thing I can think of is the French invasion. But the French invasion must have also introduced the decks into the Avignon area: otherwise, why wasn't the name change earlier there?)

Or (3) Just before or in 1505, there was a rule change involving discards or deductions that applied especially to these decks called "tarot," a rule change that was quickly adopted in the major places where these decks were used, and the name for these decks and games was changed to remind people of the new rule.

Your choice is 1; Ross's is 2; mine is 3. Now, what are the probabilities? I see I will have to get a copy of Game of Tarot from somewhere. I don't know if it will help.

#28 by mmfilesi
I will try to ask questions, but it's hard for me to say this in English. Well... I try. Please give your opinion.

a) Since 1475, approximately, there is a chart production in Provence?

c) The carmarkers guilds participating in the procession, popular, of the Tarascan? Probabily. This procesions, in general, are paid by the people. And it is a solidarity mechanism.

d) The meaning of the word "taraux" applies to all tarot card games or just type tarot cards (with triumphs) (this discarted to be for decoration, or the name of a town or any other deck's generalization)?

e) The Italians know whats mean the word tarocchi? No (Lollio said). But, the cardmarkers french knows taraux? Probabily (In 1505 says it is a common word).

f) In short, is not it logical that the craftsmen of Provence called his deck with triumphs, the deck of the tarasque?

I'm afraid I don't find the proposed relationship between tarot and the Tarasque very convincing.

The devil in the tarot is usually portrayed as either "THE" devil, or a demon of some sort, and the tarasque seems to have been much more of the "dragon" or "monster" sort. Whereas, the Cary Sheet devil is certainly a devil, I only point out the iconographic relationship to Krampus, who is also more of a devil then a dragon or monster. So, I see a monster rather than a devil. The description and portrayals of the tarasque are very different than anything in tarot.

I also personally believe the Devil card was one of the cards in tarot from the beginning, I don't believe the Devil and Tower to be "added" cards. So, I find little reason to assume that the Devil would be chosen as the main card to name the deck after, it just doesn't make sense to me.

Even considering that there were guild celebrations of the Tarasque, these sorts of processions were very common with almost every guild choosing a saint or subject and being responsible for some sort of activity and procession. If you can find evidence that the cardmaker's guild were sponsors of the Tarasque, then that would improve the case, but we can't assume that they had anything to do with it.

At this point, the strongest connection between the tarasque and tarot that I see is that they share a few letters in their names.

I wonder if there is a some sharing going on between Martha and the Tarasque and Margaret and the Dragon?

#30 by mmfilesi
I'm going to Cusago one day and it is filled with interesting articles. GREAT!

Probabily I need send the hypothesis of Tarasque to narrland, where the man and the moose is Santa Claus (or Venus ^^). I will investigate this taroccho's fool. Thanks very much.

PS. Anyway, I also continue to look a little more this Tarasca. (In Catalonia and Spain, in the procession of the Tarasca are fools).
When a man has a theory // Can’t keep his mind on nothing else (By Ross)