For the exclusive use of studying the iconography of tarot cards. Each trump has its own thread, allowing detailed exploration from a variety of sources.
Post Reply
118 posts

robert wrote: The Fool from the d'Este Tarot:

Looking at this image again, it seems possible that the children are not actually touching (or intending to touch) the Fool's penis, but simply revealing it.

You're right! It looks like they are pulling down his loincloth.

What what what does this mean?
Top

debra wrote:You're right! It looks like they are pulling down his loincloth.

Debra, I wish I knew. I'm sure it means something specific though. The initial impression of a tableau or play remains strong - his posture has a "Da Dah!" feel about it, both with the banner and the upraised left hand in an open-palm gesture. He's very clearly meant to represent a Fool, but I wondered perhaps if he is simply 'playing the Fool' in one of the many entertainments that must have been held at the Este court.

I've looked through the illustrations of Das Narrenschiff, hoping to find a clue there, but I can't find all of the woodcuts online, and Brian Williams' Book of Fools only shows the originals he used for the Ship of Fools Tarot.

The cards from the Ercole d'Este tarot don't seem to have any obvious theme that I can ascertain (apart from the figures' richly patterned garments) to give us a lead. I have eight of them (major arcana) in colour in a small book called The Art of Tarot by Abbeville Press: The Fool, The Mountebank, The Pope, Temperance, The Star, The Moon, The Sun and The World. Kaplan shows all sixteen (8 major, 8 minor, ET Vol. 1), from the Cary Collection of Playing Cards at Yale University, but they don't seem to be available as images in their online database. The most unusual of all these (apart from the Fool) is the Sun card, which features Diogenes in his barrel.

Interestingly, the cards are:

Woodblock print and tempera and gold on pressed cardboard...

which suggests that quite a few decks may have been printed, if not actually painted over as well.

Oddly, two more or two of the same curious children connect the Fool to the Mountebank.

On the Fool card they're shown revealing the Fool's crown jewels; on the second card one child is reaching up to pull down the Mountebank's arm, presumably to try to see what's in the cup. This seems so normal and understandable that I doubt if any one of us would question what's happening here. It's straightforward so we don't begin wondering or looking for an answer.

But... suppose the Fool is taking part in some sort of entertainment, posing as something abstract and elevated such as Pride (which could perhaps be equated with Folly). The banner looks a little like Fortune's sail, but possibly that's stretching imagination too far. The children, in their innocence and curiosity (the meaning wouldn't work with adults), are simply exposing him for what he is - a man, not to mention a Fool with his badge of office on his head.

On the second card, it's the Mountebank who's in control. One knows that (unlike the Fool) he's not going to let a couple of children expose his trickery to the audience. His right arm is staying up there until his left hand has checked the child's efforts to reach the cup. He even looks as though he's winking.

To get to the Beinecke's images of the d'Este from their site, http://beinecke.library.yale.edu/dl_crosscollex/, search "d'este" and it's on p. 2. They have two images, one a low-res black and white. I would guess that this is not just a black and white image of the same card, but a different one, that had been printed but not yet colored. Trionfi.com mentions the d'Este card-printing machine somewhere. I doubt if it is a black and white illustration for an early printed book, because of the large amount of white in the image. (Compare it to Kaplan's reproductions of d'Allemagne's 1906 versions, Kaplan vol. 1 p. 118. For whatever reason, Kaplan does not have a d'Allemagne image of the d'Este Fool.) But I am no expert. 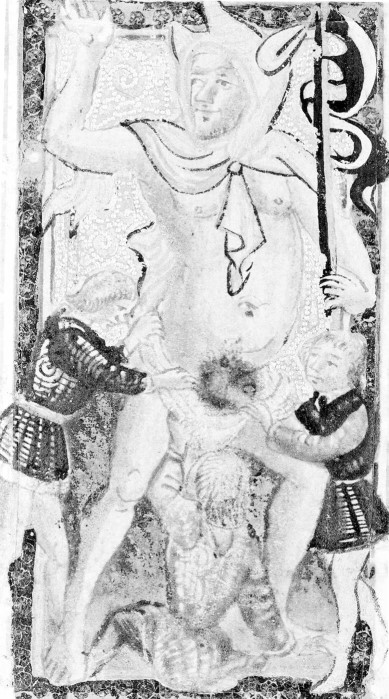 This image, interestingly, is something like a mirror image of the colored one. 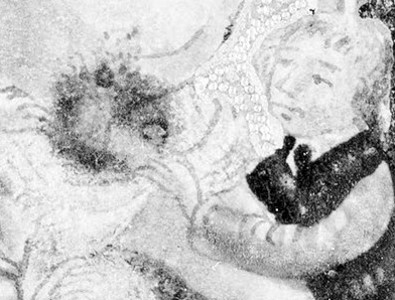 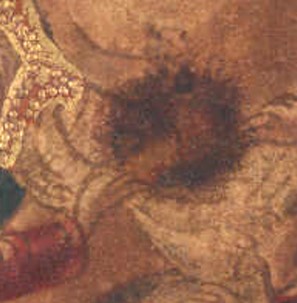 The boy is definitely pulling down the loincloth, as might be permissible at Carnival, if the Fool acts unresponsive when the crowd says "Show us your c--k" (the wording used in New Orleans; I am not sure what the bounds of good taste are on this Forum, regarding words). But the boy also might be sneaking a touch, with one or more of his fingers.

For my analysis of the meaning of the gesture, I don't think it makes any difference whether he is touching or not. It is the outline of an artificial phallus under a cloth on the tray, as described by Clement of Alexandria and depicted on Roman sarocophagi, and perhaps the lifting of the cloth at some point, that matters. It is a sacred object and fertility charm, not to be defiled and especially not to be handled inappropriately, as the animal is attempting to do on the "Marseille" cards (most clearly in Noblet).

Daimonax makes a big thing of the touch, especially in the "Lover" card (where I don't see it implied at all, nor necessary for his point), in part based on its significance at Pompeii. For me, Pompeii is irrelevant, because it was excavated long after the cards were made; and even there, it is an artificial phallus that the girl touches--with her hand, over a cloth covering it. One of the Dionysian sarcophagi that might have been seen in the Renaissance does show the touch of one satyr's phallus onto the buttocks of another satyr, part of a suggestion of ritual intercourse. (You can see it on Daimonax's site.) It is unclear that the image was meant to signify something that actually happened in a ritual, but the Renaissance might have imagined that it did, in the "Bacchanalia." There was the Roman historian Livy's account that it happened in his day, in ritual intercourse by both sexes. He says it was a debasement of the original ritual. And of course these examples are a different order of magnitude than mere touch.

Thanks Mike. It's odd, but today, unlike yesterday (failure with exactly the same procedure from the same page), I was able to access the images. It's a somewhat frustrating site, as it doesn't seem possible to browse, only to search.

It's strange that the printed only image is reversed from the printed & painted image - is it possible that one was flipped digitally by mistake or that a second print was taken from a printed paper rather than the block?

Re. your explanation of what's happening on the Fool card, are you completely happy with it? It doesn't feel enough like one of those beautiful insightful moments to me - as with the white girdle on the Charles V1 Moon card. Perhaps something just right (for me, at least) will come to light in time.

Well no, I'm not completely satisfied--not any more, not since you've kept pointing out things I overlooked, twice now. It's a fascinating image, that d'Este card. I'll email the Beinecke. Once I got a good response from them, and the next time I asked something they didn't reply at all. We'll see. And yes, I find it a frustrating site, too.
Top

Looking again, the page with the black and white image gives: "Physical Description: 4x5 bw neg". I think this image is simply that, an image made from a black and white negative of a painted card. Look at the banner and the darker parts, and the lightness of the 'ink' where the gold should be (or actually is). From my experience of printmaking, it's not as consistent as one would expect if it were simply a printed image or a photgraph of one.

I'd agree it is a b&w negative, it looks exactly the same in detail to me.

As for the subject, it still reads as "exposure" to me, the Tarot de Marseille is the dog pulling down his britches, and the d'Este is children. IMHO.