Hello! - and kind question for help w.r.t. the etymology of tarot

What we need is a German version of the younger Pratesi, someone who can go and actually be permitted to look at the Nördlingen records.

And yes, people really should join the IPCS. It's not expensive, about 16 US dollars a year, if I remember correctly. And also read their forum (which I have not been doing!). Richter's posts are terse but complex, and I'm not sure any paraphrase by us can do it justice.

Schreiber's text is very complex. Actually I imagined, that he got a lot of material by writing to the archives. He published 1937. This was a time, when German children got the commission to check their ancestors, what promoted ancestor research and generally much activities in the archives, possibly a very good time to search for playing card records. For the nasty political aims of the time the ancestor research was done to find out who is Jewish and who not.
"Die Altesten Spielkarten und Die Auf Das Kartenspiel Bezug Habenden Urkunden Des 14. und 15 Jahrhunderts" ... Schreiber notes "Urkunden", not book reports in 18th or 19th century.
Ah ..... Checking his long publication list, the text about Spielkarten isn't listed ... Schreiber died 1932, the book (1937) was published posthum. Schreiber likely had gathered a collection of material, which was published by his pupils.
https://de.wikisource.org/wiki/Wilhelm_Ludwig_Schreiber

And yes, people really should join the IPCS. It's not expensive, about 16 US dollars a year, if I remember correctly.

The IPCS discussion forum has been up since 2012, but only recently, in the last couple of years, has become very active. There is not much discussion of Tarot.

The only reference to our forum there seems to have occurred in 2014, in a conversation about the Castello Ursino Nude on Stag card, between Marco Ponzi, Emilia Maggio, and finally Michael Howard, who discusses our discussion of that card here. No further replies were received after that.

according Beyschlag: KARNÖFFEL in Nördlingen (possibly) in 1456

#34 by Huck
according Beyschlag: KARNÖFFEL in Nördlingen (possibly) in 1456

Perhaps Richter would be interested, when he hears, that his thesis was discussed here in this forum. We also discuss occasionally topics outside of Tarot, perhaps the IPCS members don't know this.
Huck
http://trionfi.com
mikeh
mikeh

Well, I don't need hard copies. The price I quoted was for digital only, which gives all the same access, they say. It's 12 British pounds a year, $16.40 at today's rate.

Yes, there is hardly ever anything that interests me on the Forum, which is why I don't remember to look at it. I don't have a general interest in old card games, such as for Maw (Irish, 16th cent.), Rümffen (a1609 "ordnung" ), Turmspiel (16th cent.), Glic (mid-15th or earlier), Linkieren (18th), Höllfahren (16th cent.), Knüffeln (modern Karnöffel), etc., etc. Although sometimes interesting stuff hides under dull titles: I wouldn't have guessed, for example, that "Bassen, Im Turn, etc." would be where Richter's posts on Karnöffel would be, or that one of many threads about Tarock, in particular one about Tarock-Hombre, would give a reference for what game Mozart played.

But the journal occasionally publishes articles of relevance here, even if Pratesi and Depaulis also post their articles online. There was an article fairly recently on the "Alessandro Sforza" deck, convincing if not earth-shaking, about the latest possible date for the deck. There is also the search engine "Ask Alexander," where old articles appear after a decent interval (I'm not sure how long), included in the membership fee. I use it often. If you know of some other way to access old Playing Card articles, let us know.

If this is not all, at least I am interested in more information...

c. 1455
The Hofämterspiel is produced for the young Bohemian king Ladislaus posthumus. It presents Hofämter (a sort of professions) on its number cards. One may conclude, that, if the Hofämterspiel was produced for a Bohemian king in 1455, that the deck with 60 cards and also with professions on the number cards, which was observed by John of Rheinfelden, was also produced for a king of Bohemia. In this case either for the young Wenzel or for his father Charles IV. Likely for Wenzel 1376, when he was crowned in Aachen.

1368/1369
The journey in the future of 1368/69 gives reason to believe, that the hypothetical decks, which Charles IV had brought to Lucca, possibly were similar to the decks, which John of Rheinfelden described. Between these was a deck with 5 suits, and each of the suits had 13 cards, which made then together 13-13-13-13-13 and this gives 65 cards.
History has it, that some playing card researchers observed an anomaly in some fragments of a specific deck Type from Lucca, made in 17th century. From the various fragments in different locations they concluded, that there should have been used a deck consisting out of 4x14 suit cards and 13 trumps of a Minchiate deck, consisting of Fool, the trumps 9-15 and the 5 not numbered trumps on the positions 36-40.
see http://trionfi.com/0/g/72
... a rather old article, maybe from 2004/5

This is an overview from the Regesten, what emperor Charles IV made at a specific time in Lucca in 1369 ... 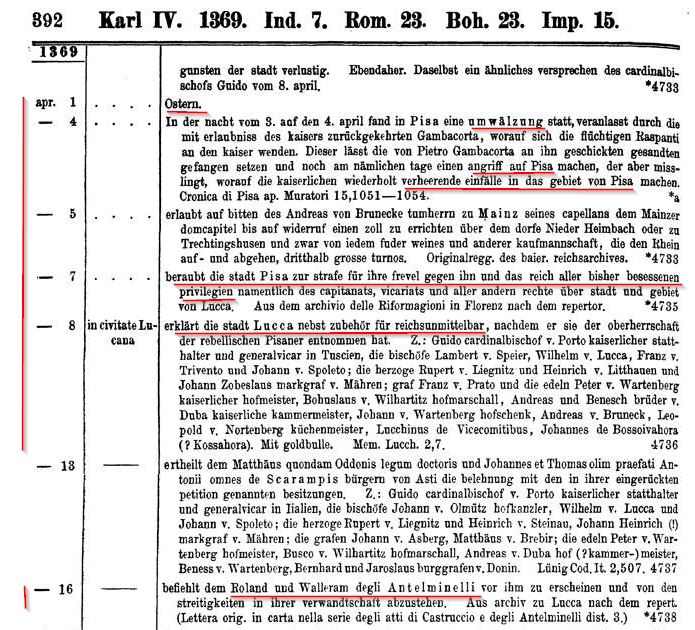 There is trouble in Pisa and Charles IV solves the situation with military actions and making Lucca "reichunmittelbar", which means independent. This is done at 8th of April 1369, a Sunday after Easter. This "Sunday after Easter" becomes a day of Independence, which is still celebrated in Lucca till today, though Lucca lost its independence in 1799.


Lucca In the Year 1369
Italians have long memories, especially when it comes to historic events and rivalries. The Lucchese are no exception. Each spring they celebrate several long-ago events - World War II Liberation Day and the feast of Santa Zita, for starters. One unique local celebration recalls the year 1369, when the city of Lucca gained its liberty from its most hated rival - Pisa (not by war, but by declaration of the Emperor Charles IV, in exchange for a large sum of money). Today’s rivalry with Pisa mostly involves soccer and the claim to who has the best city to visit or live in, but in 1369, achieving freedom from domination by a rival city state was huge. After that, Lucca fought hard to maintain its independence from all rivals, especially Pisa and Florence,

In the Regesten-picture appears for the 16th of April the name Antelminelli. Roland Antelminelli is identical to Orlando Antelminelli, whom Andrea Vitali takes as the father of Prince Fibbia, who according a picture of c1630 invented the Tarocchino Bolognese.
Huck
http://trionfi.com

Huck wrote: ↑
25 Mar 2021, 02:31
Perhaps Richter would be interested, when he hears, that his thesis was discussed here in this forum. We also discuss occasionally topics outside of Tarot, perhaps the IPCS members don't know this.

I found Jonas Richter at his website and contacted him.
https://gespiele.hypotheses.org/author/gespiele
He has a strong interest in old games and he's expert in Mittelhochdeutsch (German spoken between 1050 and 1350 in the upper and middlegerman regions). He has an astonishing big note collection to the game Karnöffel, which impressed me. I've made one myself, but I think his is in many aspects better.
A further text is added to the discussion:
Nördlinger Stadtrechte des Mittelalters. Bearb. v. Karl Otto Müller. München 1933. (Bayerische Rechtsquellen 2)
https://drw-www.adw.uni-heidelberg.de/d ... blaettere=>
"Karneffeln" is mentioned at page 86 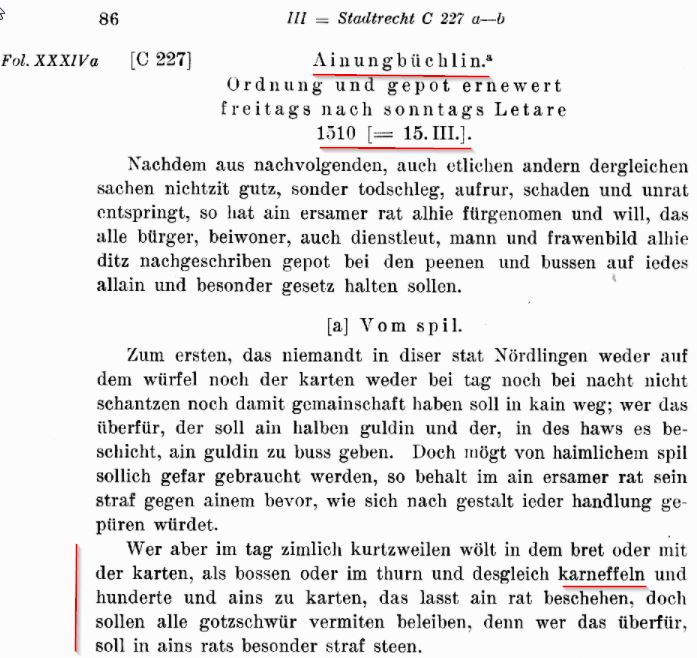 Now I can come back to this thread. There I read


mikeh wrote: What we need is a German version of the younger Pratesi, someone who can go and actually be permitted to look at the Nördlingen records.

and as a new-comer to the field, it seems to me that you look for the impossible:

a German version of the younger Pratesi is simple something impossible, since Pratesi seems to be --to my humble eyes-- a Genius of its own. You will never find someone who could be "a version of" him.

However, if you look for a quite young German professor in a mechanical department (as Pratesi was) at a renowned university at the southern part of Germany, I know someone: I am discussing the issues in this forum with him quite lately. Hence, if the mandate is clear --with that I mean: the questions to be answered are clear--, I can try to convince him to go to Nördlingen and to see the archives, if he is permitted and time permits (more difficult will be to convince his wife..).

#40 by Huck
For the case of "Karnöffel in Nördlingen" one first has to understand the arguments of Jonas Richter, who at the moment has only limited time. This shall be better in the second half of April, as he had told me. For the moment one can study the 7 sources ... all collected by myself at ...
viewtopic.php?t=345&p=23637#p23562
Especially important is the last part published in 1933.
https://drw-www.adw.uni-heidelberg.de/d ... blaettere=

There it might be of interest to understand the complete book, not only page 86.
Huck
http://trionfi.com