#1 by Ronan
Researching a couple of points in Court de Gébelin’s essay which mentioned Aluette, I looked into the literature on the subject, and it may interest some readers to know that the classic studies on this neglected relative of the Tarot are now available online; the two early (and quite lengthy) articles by Dr Marcel Baudouin, and the more recent monograph by Alain Borvo, Anatomie d’un jeu de cartes – l’aluette ou le jeu de la vache.

Baudouin’s articles may be found on the website of the regional archives of the Vendée here: http://recherche-archives.vendee.fr/arc ... ype=simple
and Borvo’s book is available to purchase here: https://www.numilog.com/827472/Anatomie ... rtes.ebook
Ronan
Ronan

#3 by Ross G. R. Caldwell
Thanks for these links, Ronan. I find the Vendée site very inconvenient to use. Several times the pages didn't open at all, but they do today. I wish they'd offer a single PDF...

Why do think Aluette is a relative of Tarot?

Relative of Tarot in the loose and figurative sense, being a card game, and it is mentioned in the same breath in Rabelais’ Pantagruel, right before “taraux”.

Yes, the way the files display on that site is inconvenient, I’ve compiled the articles into PDFs here: 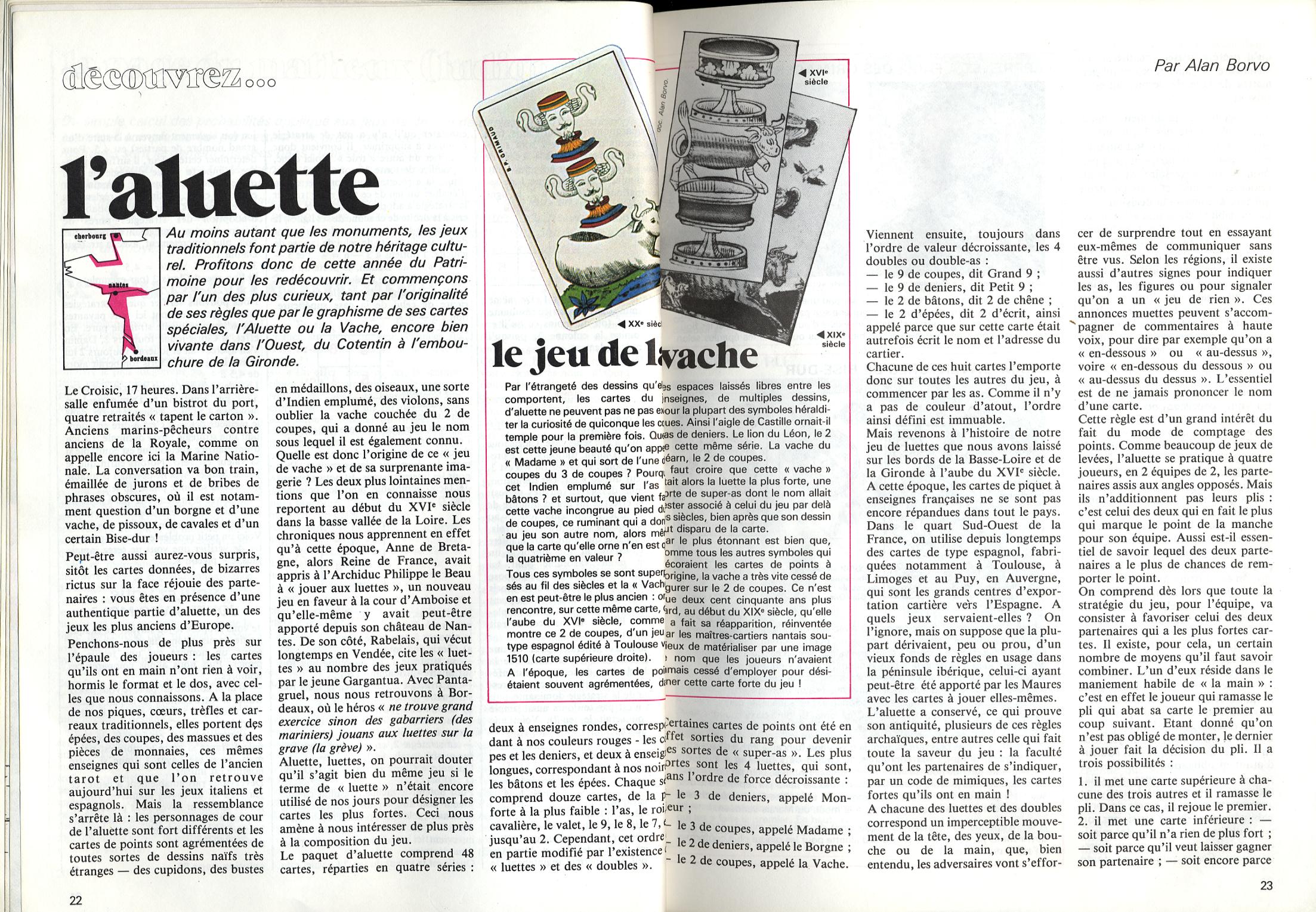 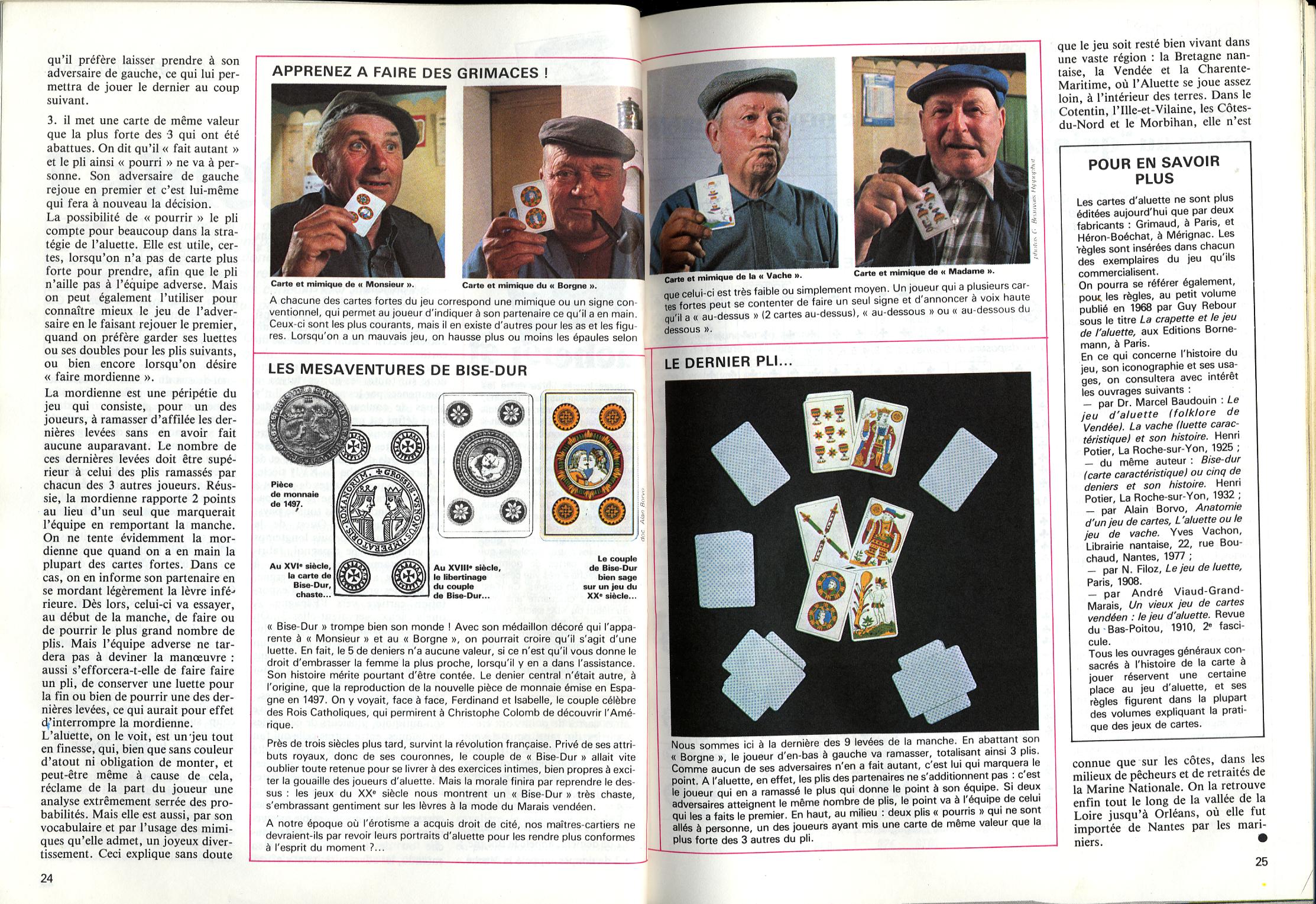 I don’t think that Baudouin’s supposedly massive Aluette card collection or the rest of his unpublished book were ever discovered, they are mentioned in Borvo’s book, and perhaps something has turned up since?

Another of Baudouin’s discoveries made the news the year before last when some of his letters were unsealed; he had supposedly discovered an underwater prehistoric cavern full of carvings and the like. Who knows what else is out there?

#5 by Ross G. R. Caldwell
Delightful! Learn how to make the "grimaces"! LOL. Those are exactly the kinds of faces you'd expect to be playing the game.

Thanks for making those PDFs - I was really dreading assembling them all page by page. I'm glad you're doing the research.

#6 by Ronan
Yeah, the "papies" are probably the main demographic who still play; the latest set of Grimaud aluette cards (the only ones available, in fact) have the instructions for the grimaces written on the cards.

#7 by Ross G. R. Caldwell
Ah, yes! I have that Grimaud Aluette. It has a folded up sheet for instructions. I bought it when I first got here, 20 years ago, and put it in a drawer.

If I had known of Borvo's book, I might have studied it long ago.

#9 by Ronan
Speaking of folded-up sheets in boxes, one of Marteau's decks in the BNF had a little surprise in it, another article by the good doctor Baudouin: 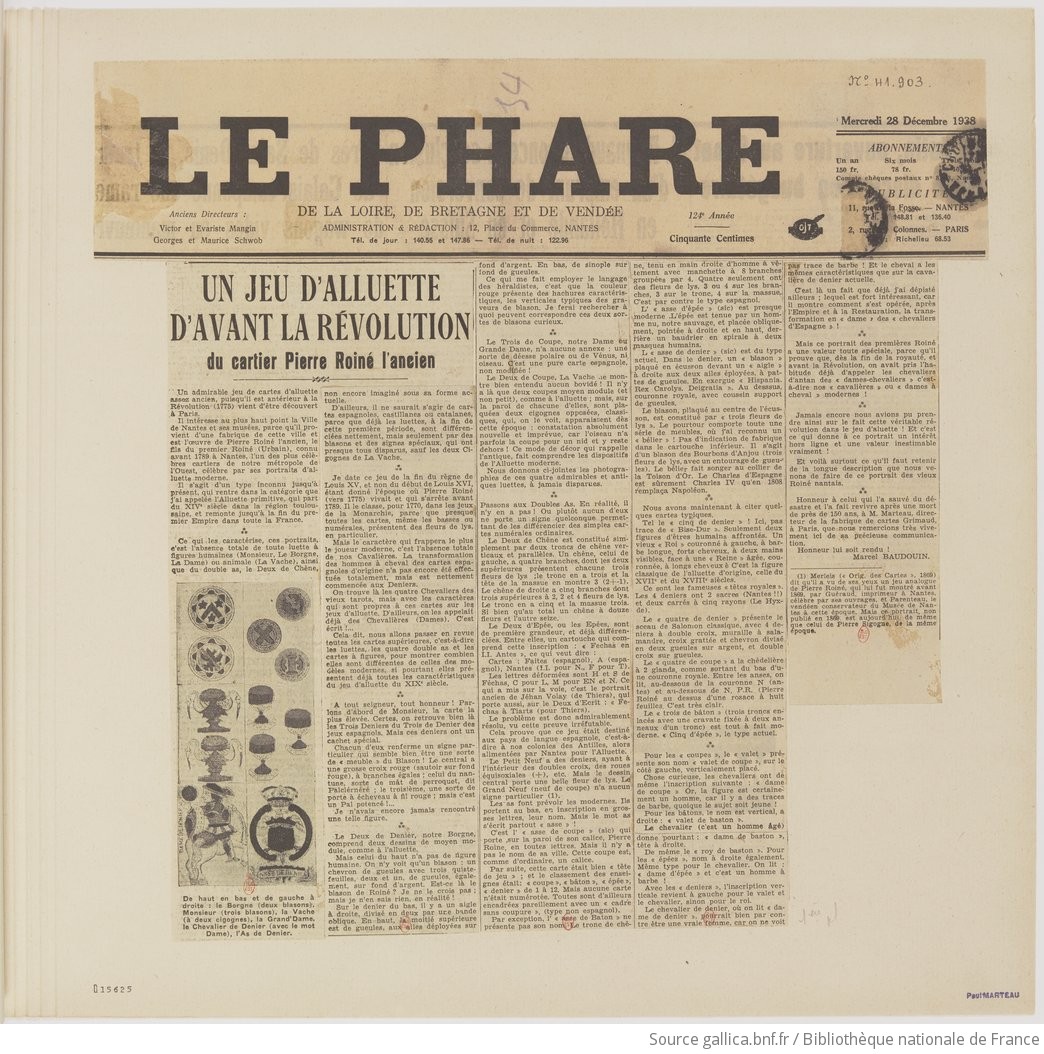 #10 by Ronan
Here’s an article on Aluette by René-Louis Doyon, which some may find interesting.