#71 by Huck
The Hymenaeus is a general figure in some wedding rituals since very old time. The text is of a specific wedding in 1475 and was written for a festival book with many pictures (in this case the wedding was the festival). The wedding pair was Costanzo Sforza (Pesaro) and Camilla "Covella" Marzano d'Aragona (Naples). The book and the wedding were very expensive.
The name Hymenaios comes from the Hymen. The bride loses her Hymen. 1475 is the time of Renaissance and in this period some persons attempted to revive old antique rituals. The Hymenaios stands for the phallus, it's not very surprizing.
Huck
http://trionfi.com
Cara
Cara

#72 by Cara
Hello, thank you. Thanks ! I went through some literature on the topic already, as well as I read all your posts in this particular topic. I was asking whether any of you had done a transcription and a translation of the above part of the text, but I'm trying to do it now by comparing the two versions - one of the 1480 manuscript in the Vatican Library (MS Urb. Lat. 899) and the incunable in British Library, London (IA 31753). You meant it just as an implicit association, or a pun , when saying " Hymenaios stands for the phallus" ? Or do you have in mind any accounts, where something like this was suggested ? While writing two different variations of the name "Hymenaeus" and "Hymenaios", you meant the same, or you treat them as a different entities ? Because you mentioned something about the " general figure". You meant some variants of this deity ? He was to be praised during every such ceremony. But were there any other deities of the similar names, who would accompany him ? Except from the association with the word "hymen", it has also a reference to the bridal hymns. Of any others, so far I haven't read. Thank you for a quick reply! Thanks.

#73 by Huck
Hymen or Hymenaeus (Latin) or Hymenaios (Roman) was according Vollmar, Lexikon der Mythologie, a poor but beautiful young man in Athen, who loved a rich girl and the girl loved him, but he had no chances cause his low position. He disguised as a girl at a celebration of the Eleusian mysteris, when a troup of pirates robbed him and all the other participating beautiful girls. The pirates became drunken, and Hymenaios killed them. Then he returned to the parents and offered to bring all girls back, if it was agreed, that he could marry his favoured girl. The parents agreed and the daughters returned in triumph. Then it became a custom to think of him at weddings, and then he became a son of Apoll and Calliope or of Bacchus and Aphrodite and he became an object of art and got temples, which could serve for wedding celebration locations. 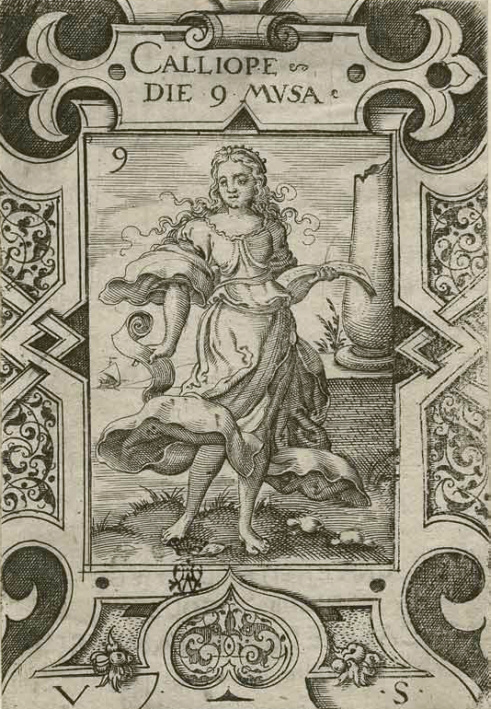 If it were Apoll/Calliope, who served as parents, then Orpheus (musician) and Linos (literature teacher of Herakles, killed by Herakles) were brothers of Hymenaios... .-)

Well, the phallus breaks the Hymen with pirates or without pirates, then it is a common bloody event in all weddings and for this action the phallus and a deflorated virgin is needed. Part of the wedding events is still the kidnapping event for the bride and the searching future husband, who has to pay the alcoholica for the kidnappers.
It is a common popular tradition, that weddings are celebrated and that the guests behave a little bit crazy.


.... is a bibliographical note of the text, which includes the name of the printer. The festival book had a handwritten version, and a posthum printed version, which was done by Hermano Levilapide coloniensi, aka Hermann Liechtenstein from Cologne (Köln) in the city of Vicenza.

The translation once was done by Marcos Mendez Filesi. His last activity here is a longer time ago. My own Latin isn't very good.

I think, this was the Hymenaios picture in the book ... 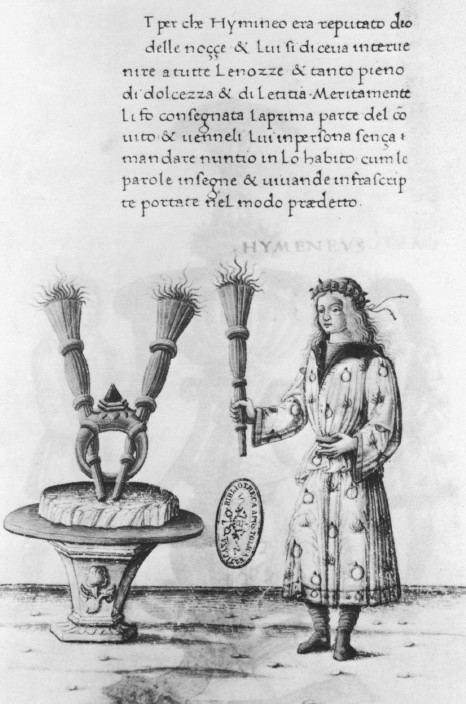 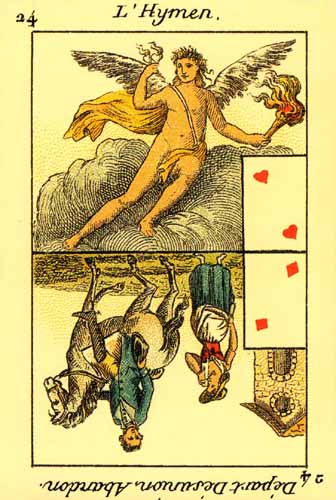 A hymen appears in the Petit Oracle des Dames, which has some complex relations to the Etteilla Tarot
Huck
http://trionfi.com
Cara
Cara

#74 by Cara
Hey , how supportive you are !! Thank you ! Thanks, I'll definitely pursue a further research in reference to my current paper on the basis of what you wrote, as well as will visit here from time to time to see, if I can take part in any discussion, or so !
mikeh
mikeh

#75 by mikeh
Here's a little more: "hymen" comes from the ancient Greek ῠ̔μήν (humḗn), meaning "thin skin, membrane" (https://en.wiktionary.org/wiki/%E1%BD%9 ... ient_Greek, https://en.wiktionary.org/wiki/hymen#Noun_5). In French, according to the latter web-page, the word has two meanings: the hymen, a part of the female anatomy, and also a term for marriage. Probably "L'Hymen" on a card, unless it is anatomical, is an allegorical figure related to the second of these meanings, so either marriage or the god of marriage.

"Hymenaeus", in Latin, comes from the ancient Greek ὑμέναιος (huménaios, or in English Hymenaios), and means either "nuptial song" or "marriage, wedding, nuptials" (https://en.wiktionary.org/wiki/hymenaeus). In ancient Greek religion, Hymen or Hymenaios was a deity who protected marriage. Greek Wikipedia gives six specific mythic characterizations, each a beautiful young man but slightly different, having in common the theme of the wedding and the songs associated with weddings (https://translate.google.com/translate? ... ch&pto=aue). In relation to Eros, Greek Wikipedia says, Hymen or Hymenaios is slightly taller (and without wings, it would appear). "Hymenaeus holds a torch, while Eros [Cupido in Italian] rekindles the flame." No mention of the phallus; apparently that is left to the imagination. And bear in mind that Temperance was also sometimes depicted as a lady holding a lit torch (and a pitcher in the other hand) (for which see the thread on that card).
Cara
Cara

#76 by Cara
The genesis of this word is rich. So many meanings , and they all together combined still make sense, that could be another paper on this. And do you use some specific dictionaries, or rather encyclopedic sources to search for all of this ? Thank you, thanks !
mikeh
mikeh

#77 by mikeh
I used Wiktionary, at the links indicated, and Greek Wikipedia, at the link indicated (both in bold). They each give further references.