#1 by Reugelith
I want to establish upfront that I am not an Oswald Wirth tarot expert, but I want to learn more about it. I have not read Wirth’s works, but from other references I am aware that he did not support Gébelin’s theory of the tarot’s Egyptian origin. So:
1. Why did he incorporate Egyptian references? Le Chariot (1889, 1926) Sphinxes with nemes in the head; La Papesse (1926) Sphinx seat; Ammit and obelisk in Le Fou (1889, 1926); Hermanubis in la Roue de Fortune (1889, 1926). Probably he was not fully against the Egyptian theory. I get that.
2. But the following I cannot understand it by any means: The Yin Yang (I Ching) symbol in La Papesse (1926): It is so out of place; How it is related with Freemason iconography?. 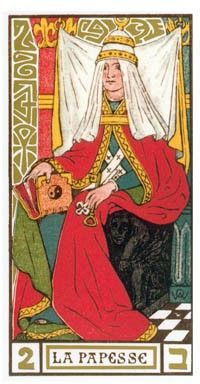 I'm not an expert in Oswald Wirth, also not in matters of Crowley, but Crowley had interests in I-Ching since .... I don't know precisely. At least in the time of Book of Thot, which is later than 1926. The magical records of the beast 666 (1914-1920) show, that Crowley used the I-Ching in this period, eatlier than 1926/27. There are publications, which indicate, that Crowley translated the I-Ching, likely based on Legge, who was much eatlier.
https://hermetic.com/crowley/libers/lib216

The theories of Aleister Crowley to a connection between I-Ching and Tarot, which he gave with the Book of Toth I regarded as nonsense in the time, when I was active with the I-Ching (and I still do), cause there is a better way to connect the Golden Dawn Tarot theories to the I-Ching, if one believes in the Golden Dawn theories about Tarot (which are based on ideas of the Sepher Yetzirah to the socalled "32 ways of wisdom" .... created very early at a date between 1st century and 5th century AD).

http://trionfi.com/tarot/new-themes/sepher-yetzirah/
I agree with the idea, that there is a mathematical connnection between the "32 ways of wisdom" and the "I-Ching with 64 hexagrams".

I could imagine, that there was some influence of Sepher Yetzirah ideas on the genesis of Trionfi/Tarot decks during 15th/16th century, but I don't think, that this was a very dominant factor.
I don't know, if there was a communicative connection between Wirth and Crowley, but somehow it looks probable to me, that Wirth knew a little bit about English Tarot decks and ideas of the Golden Dawn development.
Huck
http://trionfi.com
Reugelith
Reugelith

#3 by Reugelith
That is a plausible connection. Thanks for your answer and the link.

#4 by Huck
James Legge translated all Chinese classics during his long life. He died 1897. An influential I-Ching translation was published 1899 short after his death.
https://en.wikipedia.org/wiki/James_Legge

#5 by Ronan
You would need to go and read Wirth’s book, now available in English, to confirm or infirm your theories. Wirth’s booklet has been retranslated and published again recently, although I have not seen either edition. It is apparently a condensed version of his main work. You can find more details on this forum and elsewhere.

That done, you might want to consider a number of points, the first being the mythical Egyptian origins of Freemasonry, as opposed to that of the Tarot, and secondly, the manner in which Freemasonry was able to co-opt symbols belonging to traditions other than those of the builder’s art.

Finally, the question of the Book of Changes and the associated diagram may be easily resolved if one considers some of the influential French translations and commentaries of the time - and neither Crowley, Wilhelm nor Jung enter into this - those by P.L.F. Philastre, and the partial translation (only the first two trigrams) and commentary by one of the grey eminences of Belle Epoque occultism, Albert de Pouvourville, alias Matgioi; Gnostic, Freemason, Taoist, member of a Triadic secret society, and mentor to René Guénon among others.

I may have an answer to part of your question...

Wirth joined with Gérard Encausse aka Papus in 1888 to form the Rosicrucian Kabbalistic Order of the Rose-Croix. The answer may be found in the book, "The Science of Numbers" (Papus).

Here, the number two is associated with a table of figures on page 98 which he calls "Chinese apparel". In it , item 2 is called" eulr:

"Two denotes the elements which can give birth: father-mother, active-passive, spirit-matter, etc. This is the principle called binary (ibid, p.99)."

#7 by Renard
For esotericists at the end of the 19th century, all civilizations came from a first, mythical civilization that must be rediscovered. See the books by René Guénon cited above.

They do not therefore find it contradictory to have Taoist, Egyptian or Masonic symbols (the black and white paving) hold on the same support, all of which refer to a universal archetype.

Their tarots wanting to be divinatory, the goal is to make the "arcane" as explicit as possible and to impose on it a meaning that we might not find otherwise.

That's why I don't really like these tarots. Wirth's is however less overloaded than Papus's. And, although less well illustrated, more respectful of the initial cards than that of Waite.

Return to “The Plush Parlor”