#31 by Ross G. R. Caldwell
Busch clears up earlier scholarship; he says that the Chronica Danielis was probably made for the Della Torre family, not the Visconti, and that the identity of Inglexia is unknown, but that Fiamma conflated it with Angleria.

#32 by Huck
I found a list, which speaks of Lombardian kings. I expected actually, that there would be a higher number of congruent entries to the Visconti list (as presented at Trionfi.com). However, there are only very few.

HISTORY OF THE LANGOBARDS
(Historia Langobardorum)
by Paul the Deacon (Paulus Diaconus)
Translated by William Dudley Foulke, LL.D.
Published 1907 by the University of Pennsylvania
http://www.thule-italia.org/Nordica/Pau ... BEN%5D.pdf
The list is at page 3/47 ... 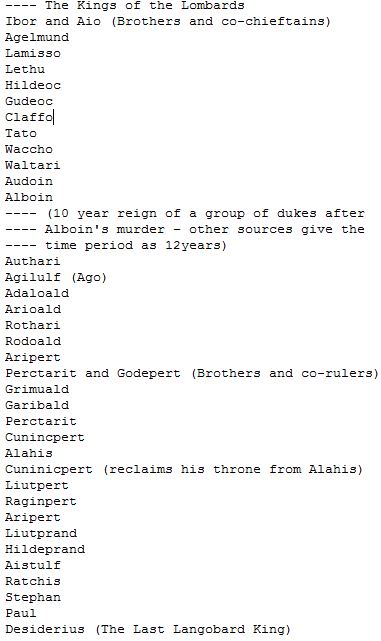 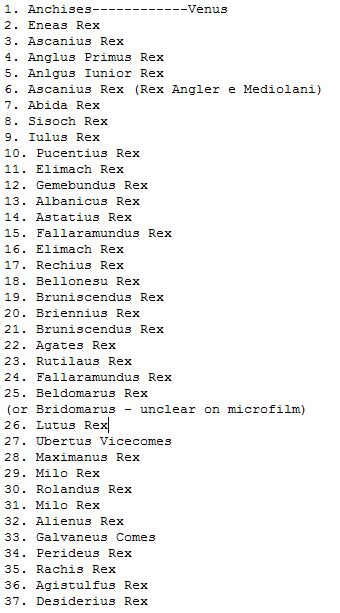 Actually I detect only "37 Desiderius" identical to Desiderius, the last Lombard king and possibly 36 Agistulfus identical with Aistulf (sic) 4 places above the position of Desiderius on the Lombard king list. So my earlier consideration was somehow wrong ....
Huck
http://trionfi.com

Cestelletto inverts their order, but these two are also in the genealogy.

Yes, you're right, there are 3 identical names. The change of Aistulf to Desiderius appears all in the year 756.

Born in Brescia, Desiderius was originally a royal officer, the dux Langobardorum et comes stabuli, "constable and duke of the Lombards," an office apparently similar to the contemporaneous Frankish office of dux Francorum. King Aistulf made him duke of Istria and Tuscany and he became king after the death of Aistulf in 756. At that time, Aistulf's predecessor, Ratchis, left his monastic retreat of Montecassino and tried to seize the kingdom, but Desiderius put his revolt down quickly with the support of Pope Stephen II. At his coronation, Desiderius promised to restore many lost papal towns to the Holy See, in return for the papacy's endorsement of his claim. Conflict with the Holy See under Pope Stephen III arose, for Stephen opposed Charlemagne's marriage to Desiderius' daughter.

Aistulf (also Ahistulf, Aistulfus, Haistulfus, Astolf etc.; Italian: Astolfo; died December 756) was the Duke of Friuli from 744, King of the Lombards from 749, and Duke of Spoleto from 751. His reign was characterized by ruthless and ambitious efforts to conquer Roman territory to the extent that in the Liber Pontificalis, he is described as a "shameless" Lombard given to "pernicious savagery" and cruelty.

#35 by Ross G. R. Caldwell
For how the Langobard connection became forged with the Visconti family, read Areli Marina, "The Langobard Revival of Matteo il Magno Visconti, Lord of Milan," I Tatti Studies in the Italian Renaissance, 2013 -
https://www.jstor.org/stable/10.1086/673405 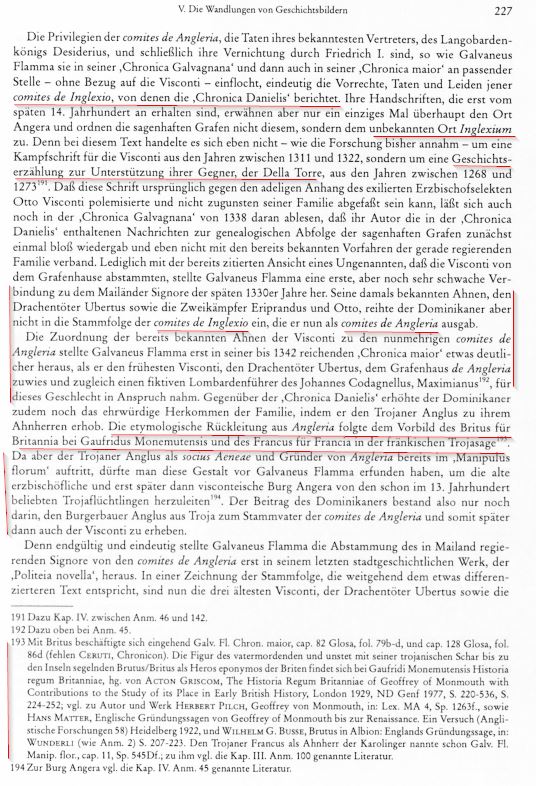 As far I can see it, Busch comes to similar ideas as myself for Anglus, Angera, Brutus and Inglexio.

The text has the pair "Elimach+Gemebundus" (see trionfi.com list) connected to a year number "annum mundus", likely for the year "X" after creation of the world. The author variously refers to "Chron. Flamma".
I searched the author name "Vitale" in the Busch text ... negative. "Theatrum" ... also negative.
Huck
http://trionfi.com

#37 by Huck
Occasionally in our discussions the personal name "Francus" had appeared. He was - at least in one version - the brother of the British Brutus.
search.php?keywords=francus

#38 by Ross G. R. Caldwell
But is there any such Urvater for "England"?

They wanted Brutus for Britain, but England comes along later that classical times, from the Angles. Maybe that tribe derived itself from some mythic father, but I haven't come across it.

Starting searching on wikipedia - "Bede states that the Anglii, before coming to Great Britain, dwelt in a land called Angulus, "which lies between the province of the Jutes and the Saxons, and remains unpopulated to this day."
https://en.wikipedia.org/wiki/Angles

But no Urvater by that name - "According to Anglo-Saxon legends recounted in Widsith and other sources such as Æthelweard (Chronicon), their earliest named ancestor was a culture-hero named Sceaf, who was washed ashore as a child in an empty boat, bearing a sheaf of corn."
https://en.wikipedia.org/wiki/Kings_of_the_Angles

It seems improbable to think no one ever connected Anglus with the Angles or English peoples, but evidence remains elusive.