#391 by Ross G. R. Caldwell
Here is a good recent discussion of these coins and the story of Laïs, with excellent photos of the coins.

#392 by Huck
It seems, that Lais was a real person and not only a mythological figure.
Huck
http://trionfi.com

Yes, it's only because she has a relationship to the Black Aphrodite that she has entered the discussion.

And now her place of death, Thessalonika, might be a link to Anchises, since that is one of the alternate places that claim him (a tomb? I haven't found the author yet). It is far-fetched, but it's all I've got the moment.

Closer in age than I thought - December '63 for me, on an air force base in W. Germany (couple weeks after Kennedy got shot ...)

You must have mixed feelings about Trump's decision yesterday. Or maybe not mixed at all.

Of course I'd assume that your birth had nothing to do with the atmosphere at the time, unless it were premature because of stress on your mother, worried about your father's perhaps imminent call to arms.

I was 2 weeks late - I like to sleep in. As for Trump - the sooner he's back to being a full time real estate con man, the better. Blowhard idiot if there ever was one. And just to clarify your own background - were you a yank at York or are you British? For some reason I thought you were American....

Back to the problem at hand - can you explain why Semideus or the genealogy in general has to refer to Boccaccio's "3rd Venus"? I would think the context of dragon(time?)/Saturn would place an emphasis on Venus's cosmological aspects (especially in regard to generating life), as well as there being a clear connection to Anchises/Aeneas...none of which the Lais story provides (and you are obviously grappling with this, i.e., "I really have found no way to connect this story to the Visconti genealogy of Semideus"). I found some interesting references in Solomon's Volume I that I'll share shortly....

No, Canadian. I lived and worked continuously in the United States from 92-2001, though, which might account for why I give the impression of being American. Plus, I adopted American spellings of certain words, although for my books I write with the Commonwealth standard spellings. Especially in Europe, where most English speakers are either British or learned British-style English.


Back to the problem at hand - can you explain why Semideus or the genealogy in general has to refer to Boccaccio's "3rd Venus"? I would think the context of dragon(time?)/Saturn would place an emphasis on Venus's cosmological aspects (especially in regard to generating life), as well as there being a clear connection to Anchises/Aeneas...none of which the Lais story provides (and you are obviously grappling with this, i.e., "I really have found no way to connect this story to the Visconti genealogy of Semideus"). I found some interesting references in Solomon's Volume I that I'll share shortly....

Because she is the daughter of Jupiter, and Castelletto says that this Jupiter is "Rex cretensis."

The banner underneath in BnF latin 5888 says:

#396 by Huck
The general model of old mythology was, that Uranos (= heaven) and Gaia (= earth) had 18 children (which were 6 male titans and 6 female titans) and 3 guys which had only one eye (cyclops) and 3 guys, who had 100 arms (and so likely 50 bodies). Then there was trouble between Uranos and Gaia, and the youngest titan Kronos made a big cut and the genital of Uranos dropped in the Ocean (that became Aphrodite alias Venus) and some drops of blood dropped and became Erinyen (furies, probably 3). That makes 18 + 4 and that's 22. Then there were melische Nymphen (Melainis or Melaina) ... and Gigantes, also from the Uranos blood.

There we have a strange accident. MELiae for melische Nymphen and Aphrodite MELainis or Melaina.

Twice a "Mel" and Aphrodite + Erinyen + Gigantes + melische Nymphen, which all belong to a dark-mystery-scene, in which a son and a wife castrate a father god.
A very powerful scene in the genesis of Greek mythology.

THE MELIAI (Meliae) were the Oread-nymphs of mountain ash-tree, born of Gaia (Gaea, the Earth) when she was impregnated by the blood of the castrated Ouranos (Uranus, the Sky).

They were the wives of the Silver Race of Man and mothers of the Bronze, the third generation of mankind. They nursed their sons on the honey-sap (Greek meli) of the ash, and armed them with spears crafted from the wood of their trees (Greek melia). The Bronze were an overly warlike race who incurred the wrath of Zeus and were destroyed in the floods of the Great Deluge.

The Meliai were probably the same as the honey-nymph (meliai) nurses of the god Zeus--Ida and Adrasteia. The manna (meli) of the ash and the honey (meli) of bees were both thought to be ambrosial foods rained down from the stars of heaven. In Hesiod's Theogony the Meliai were born alongside the Erinyes--avengers of the castrated Ouranos--and the Gigantes. The latter appear to be the Kouretes (Curetes), the male guardians of the infant Zeus. As children born of Heaven's castration, it is appropriate that the Meliai and their brothers would have some role to play in the downfall of the perpetrator Kronos (Cronus).

They also don't have a clear idea, what the melische nymphen are good for.

Greek words, which start with meli- (as Meliai) are often related to sweetness, honey and bees. The most common interpretation as "ash tree nymphs" (which has no sweetness, honey or bees) depends on the idea, that there was a forerunner word which started with smeli-.
Huck
http://trionfi.com


I don't think anything more than lining up Saturn ("time"/creation) as the father of Jupiter in Crete is intended by specifying Jupiter as king of Crete, to connect the genealogy to primeval roots (and more importantly to the Aeneid; more on that below); Boccaccio:


The fact that the third Jupiter is specifically a man here fits in with Marziano's own euhemeristic emphasis and thus avoids impiety in positing a deity as ancestor (although they cross that line repeatedly in my book).

The bigger issue in my view is the addition of Saturn to the genealogy, connected with a dragon. Although depicted in the Semideus as neither strictly the biscione stemma nor uroboros, I do think it's ultimate meaning has to relate to the latter - the medieval symbol of time connected with Saturn, and critically depicted as such in the monumental fresco cycle in the city of "Anglus":


Anchises and Aeneas are also named with Cretan Jupiter in the banner in BnF latin 5888 due to the Aeneid. In Book 3 of the Aeneid, Virgil has Aeneas at Delos where Apollo speaks to him, instructing him to go to the land of his ancestors. Anchises interprets Apollo’s remark as a reference to the island of Crete, where one of the great Trojan forefathers—Teucrus, after whom the Trojans are sometimes called Teucrians—had long ago ruled. Aeneas and his group sail to Crete and began to build a new city, but a plague strikes. The gods of Troy appear to Aeneas in a dream and explain that his father is mistaken: the ancestral land to which Apollo referred is not Crete but Italy (and let's recall here that Saturn is also seen as the founder of Italy). More on the significance of Crete in the Aeneid here: Rebecca Armstrong, "Crete in the Aeneid: Recurring Trauma and Alternative Fate", The Classical Quarterly, Vol. 52, No. 1 (2002), pp. 321-340.

Crete thus belongs to the Visconti genealogy's origins but not its future (in the Aeneid's timeline sense of course), and that place connects Saturn with Jupiter as a man. Saturn unavoidably connotes something divine however....at least the creation of "historical time."

#398 by Ross G. R. Caldwell
One thing to bear in mind with our Black Venus is a suggestion somebody on my Facebook Tarot History group suggested - that the artist painted her face with silver (or white) to make her stand out, and over time this has turned black.

It's ad hoc and, without close examination of the manuscript, unverifiable. I don't know any analogies offhand, or how to test its likelihood in any other way. Perhaps look at the rest of the page, to see if something similar has happened that we can verify. 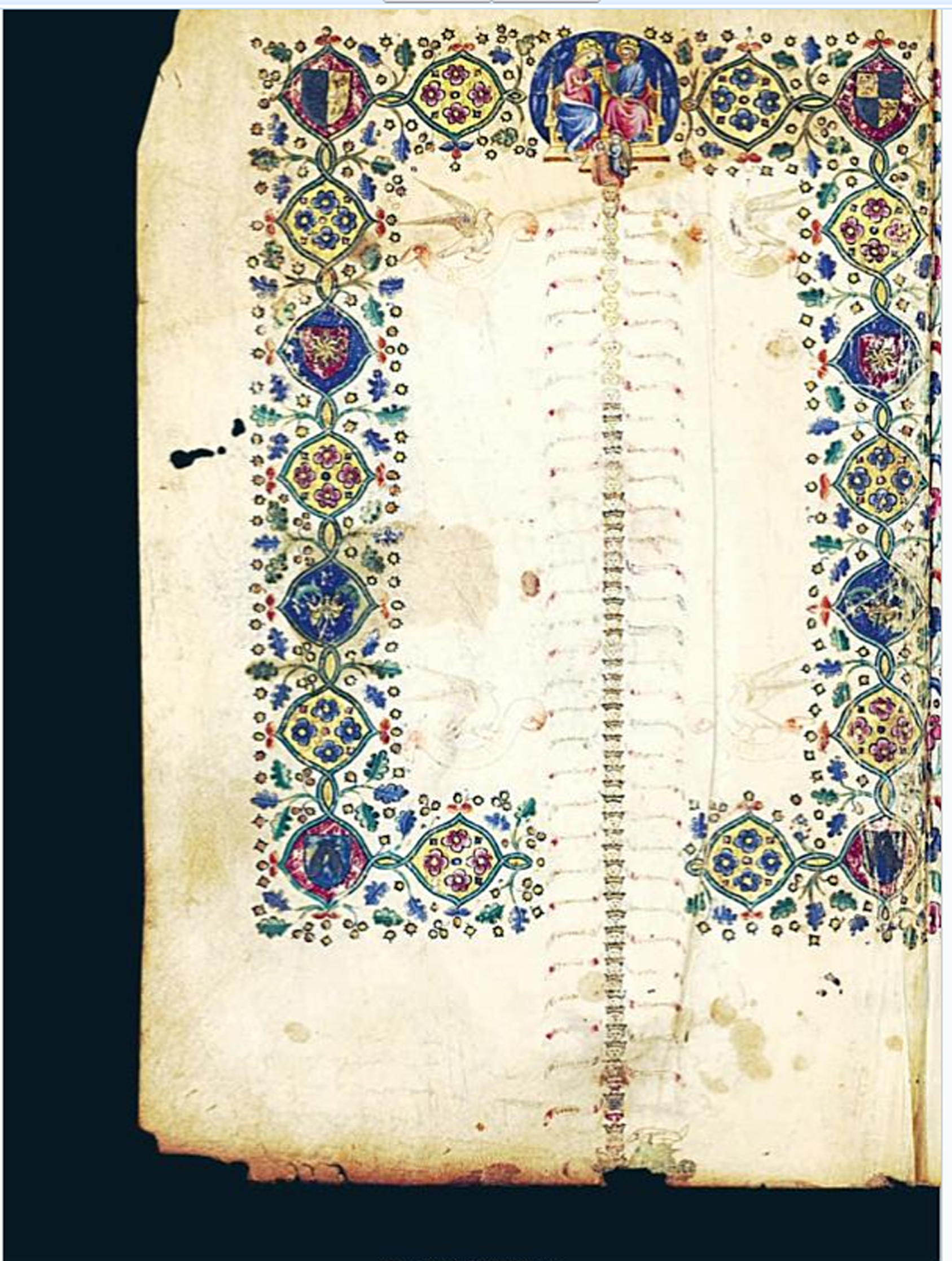 What is this shield? Is the left part supposed to be silver, or is it blue/black? 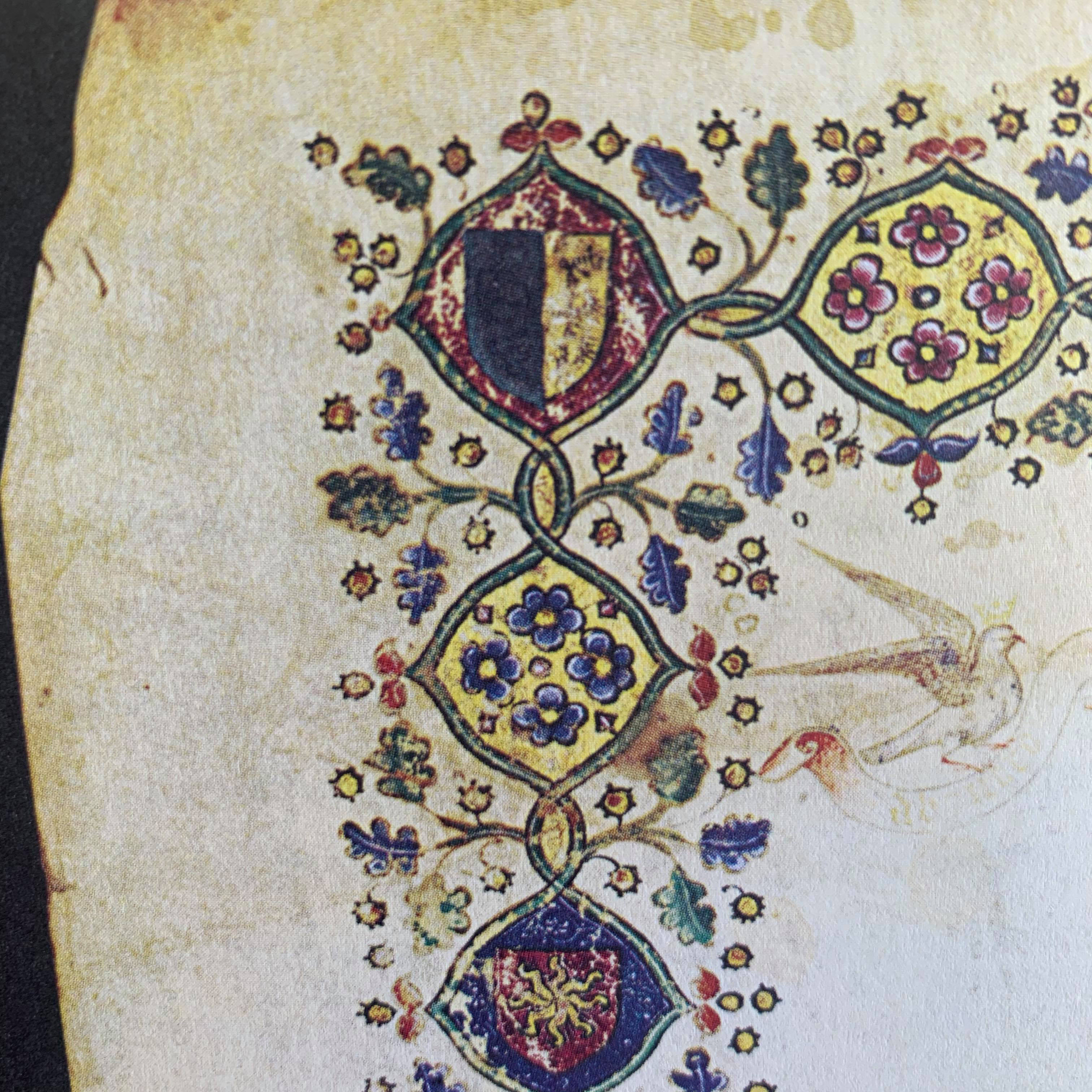 The "black" of Venus seems to match the "black" of top right shield. And we know that this shield was the quartered Visconti shield with two imperial eagles and two biscione. Obviously something has happened to darken it, or the resolution of the picture is just not good enough. But what color is this part of the shield normally?

It looks like the background is supposed to be white, which is heraldic for silver when metals aren't used. Thus, the shield at top right originally had a silver field under the viper. 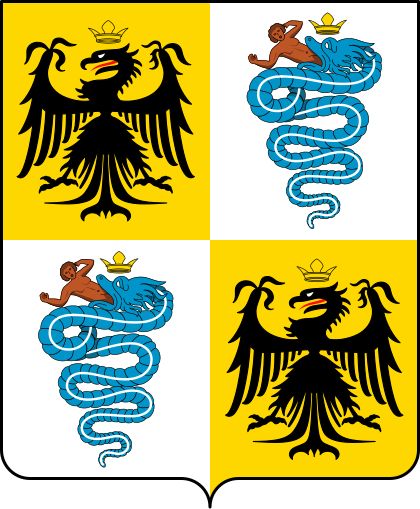 So, all we have to assume is that the painter made Venus silver originally, and this has turned to blue-black now, like the shield at top right. Is this a good solution?

We should keep in mind in any case that we could be misinterpreting this iconographic detail.

Now back to our regularly scheduled programming.

I suppose we have no way of knowing what local dark goddess got assimilated to Aphrodite. But it is not relevant to us, we only want a way to connect it to what some artist in Pavia or Milan in 1438 might have intended.

#400 by Ross G. R. Caldwell
"Black" Venus and shield comparison, same photograph, same scale. The dark blue-black of the shields should be silver. Perhaps the artist painted Venus silver as well, and she has similarly blackened. 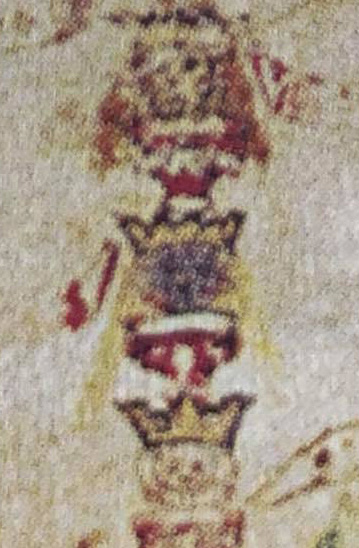 The "somebody" on Facebook that I mentioned above is Alison Cross, and then supported in theory by Fabian Fidel Aguilar.
I have provisionally come to accept silver-oxidation as the most probable explanation of the Black Venus of the Russian National Library, St. Petersburg, Q.v.XVII 2.