#371 by Huck
It's unusual, when a list starts at the bottom of a page.
Huck
http://trionfi.com

It's not a "list," it's a genealogy or lineage, growing upward. 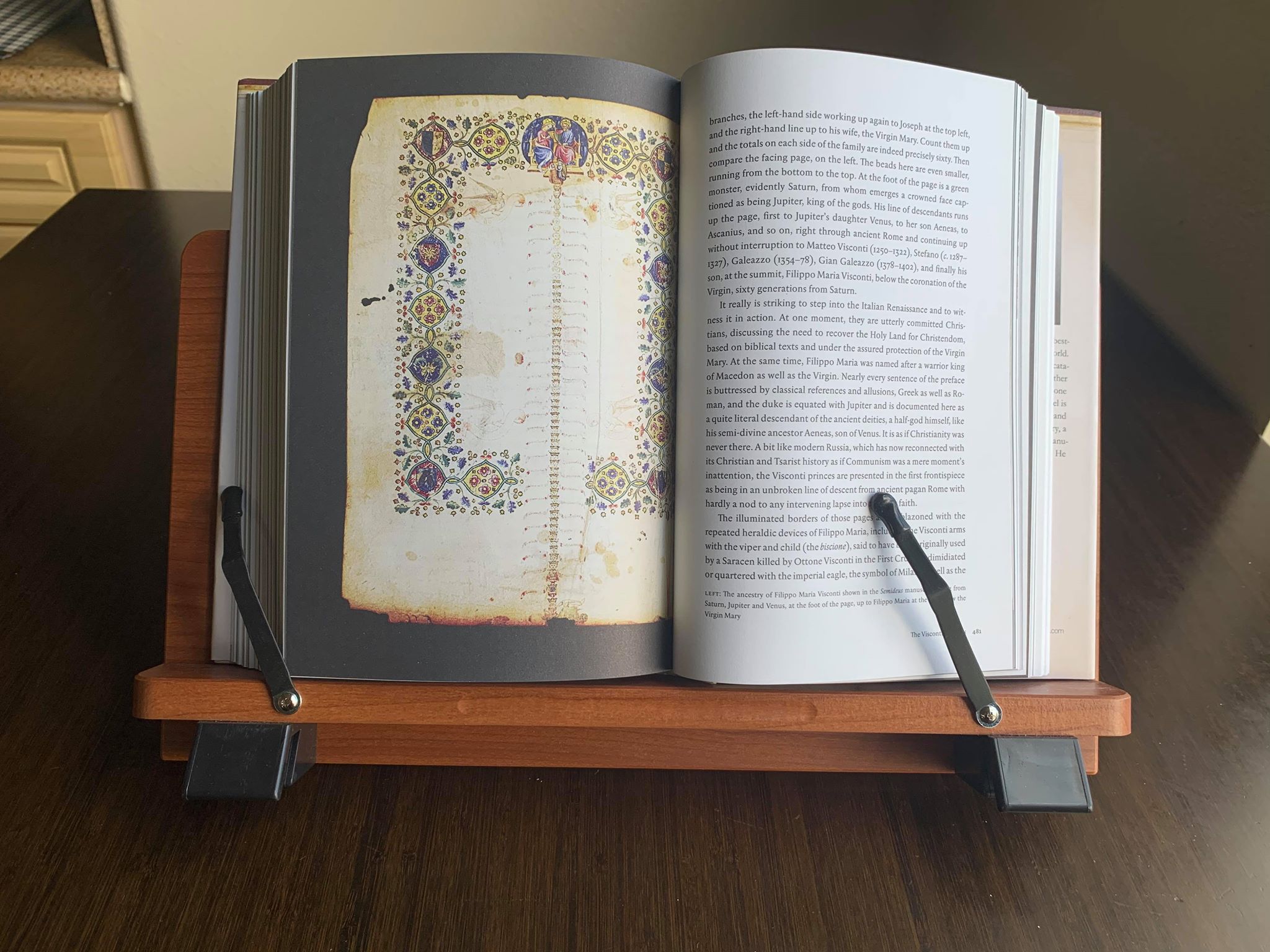 It is 60 figures, starting with Jupiter as 1 and Filippo Maria as 60. Sacco associates this with the sixty generations from Adam to the Virgin Mary.

Please note that I miscounted in the genealogy you use at trionfi.com - I missed number 57. Use this one instead -

... :-) .... A list can contain a genealogy or a lineage or soccer teams or tarot cards or the emperors of China or whatever.
The other genealogy list with the nearly the same content was not growing upward, but falling downward.

Venus in black reminds me on a black madonna.
Most old Black Madonnas have appeared in France, but there were also some in Italy though not very much in the Lombardy region.
https://en.wikipedia.org/wiki/Black_Madonna
Huck
http://trionfi.com Bueno de Mesquita does not note any other examples of the generalization. Aeneas, just above Venus in the genealogy, is shown with red hair. Is this trying to show that the Visconti inherited their "reddish hair" from Venus and Aeneas?

But more striking in the genealogy is Venus' dark complexion, and vibrant blond hair.

Does anyone know of medieval precedent for a black Venus?

Equally valuable in this context, this article put out by the Walters Museum - "Becoming a Blond in Renaissance Italy",
https://journal.thewalters.org/volume/7 ... -at-w-748/


By 1256 the Latin language barrier started to fall. Beatrice of Savoy [a sure connection to Milan], wife of Raymond Berengarius, count of Provence, commissioned their court physician, Aldobrandino of Siena, to write, in French, the Régime du Corps—an expanded compilation of passages lifted from Tacuinum Sanitatis [definitely Milan] and a variety of other medical sources, including Isaac Judaeus, Avicenna, Rhazes, Constantinus Africanus, and Ali Abbas. The Régime du Corps covers a wide array of topics including Galen’s precepts, information on the properties of seventy-three different foods, advice on pregnancy and the care of newborns, and a discussion of physiognomy and body care; a section devoted to hair includes a passage on hair lightening.[14]

[a bit later but obviously drawing on earlier texts]
Within this brief discussion, the Walters’ Treatise on Cosmetics can be usefully compared with other contemporaneous cosmetic manuscripts: the Experimenti compiled by Caterina Sforza (1463?–1509), Countess of Forli and Lady of Imola,[19]and the anonymous Ricettario Galante compiled between 1500 and 1520.[20]

The Experimenti is a wide-ranging compilation of more than four hundred recipes for “curing headache, fever, syphilis, and epilepsy; lightening the hair or improving the skin; treating infertility, making poisons and panaceas; and producing alchemical gems and gold.”[21] Many recipes require distillation, including two for blonding.[22] Sforza collected recipes from numerous correspondents over many years, which might account for the compilation’s haphazard organization. Recipes are composed in both Latin and Italian; Sforza ensured the secrecy of some recipes by writing them in code (it is therefore likely that only she could quickly locate specific items).[23] Ingredient quantities are often vague or even missing altogether, perhaps due to oversights by her correspondents.

[finally the recipe "outcomes" from the latter Ricettario source]
Recipe A shifted both samples one-half level lighter, and Recipe B, one level lighter (fig. 9). The results are most evident on the tips of the hair, where it was least compacted. While the change is barely noticeable on a gray scale, it is important tonally. When hair lightens, warm tones (i.e., red, orange, and yellow) automatically appear, making the hair seem more “golden,” the medieval and Renaissance ideal.


Naturally Venus as the exemplar of beauty is blonde, but why dark-skinned? Pure guess here, but given the highly symbolic nature of the genealogy, is it possible the painter was instructed to make sure the higher Venus Urania, versus the base/terrestrial Venus, was indicated? Perhaps the dark (blue?) color was to indicate the color of the heavens, as in the celestial background of Venus depicted for Pizan c. 1410: 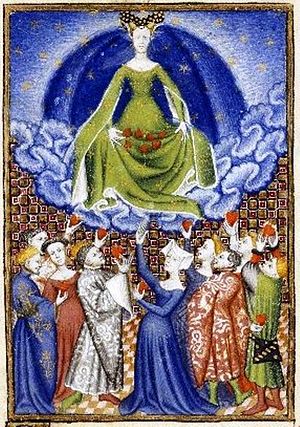 The classical roots of Venus Urania/Caelestis:

According to Plato, there are two Aphrodites, "the elder, having no mother, who is called the heavenly Aphrodite—she is the daughter of Uranus; the younger, who is the daughter of Zeus and Dione—her we call common." The same distinction is found in Xenophon's Symposium, although the author is doubtful whether there are two goddesses, or whether Urania and Pandemos are two names for the same goddess, just as Zeus, although one and the same, has many titles; but in any case, he says, the ritual of Urania is purer, more serious, than that of Pandemos.
....
From the middle Imperial period, the title Caelestis, "Heavenly" or "Celestial" is attached to several goddesses embodying aspects of a single, supreme Heavenly Goddess. The Dea Caelestis was identified with the constellation Virgo ("The Virgin"), who holds the divine balance of justice [and of course Mary is blonde under French influence]. In the Metamorphoses of Apuleius,[3] the protagonist Lucius prays to the Hellenistic Egyptian goddess Isis as Regina Caeli, "Queen of Heaven", who is said to manifest also as Ceres, "the original nurturing parent"; Heavenly Venus (Venus Caelestis); the "sister of Phoebus", that is, Diana or Artemis as she is worshipped at Ephesus; or Proserpina as the triple goddess of the underworld. Juno Caelestis was the Romanised form of the Carthaginian Tanit.[4]

Grammatically, the form Caelestis can also be a masculine word, but the equivalent function for a male deity is usually expressed through syncretization with Caelus, as in Caelus Aeternus Iuppiter, "Jupiter the Eternal Sky." (Wiki)


The only depiction of mythical subjects in blue/dark skin I can think of are Aeolus' wind gods, often thought of as intermediary between the heavens and earth, and indeed, the upper left one is set amongst the stars here in this Apollonio di Giovanni cassone (and let's not forget Venus fell to the sea through the realm of the wind gods): https://upload.wikimedia.org/wikipedia/ ... 282%29.jpg

I would tend to think of Venus's dark blue coloring in this context as "celestial grace" with which the entire genealogy is blessed (the holy ghost/radiant dove impresa paralleling that thought).

The problem here is that the Visconti ancestor, "wife" of Anchises and mother of Aeneas, is the third Venus, the daughter of Jupiter, told in Genealogia deorum gentilium XI, iv. This book hasn't been published by Jon Solomon yet, so, for translations, we have to use the French of 1498 or the Italian of 1547, both excellent.

But to get to the point, the text there doesn't mention her skin color, although it does allude to her resplendent hair. Boccaccio quotes the first line of a poem of Claudian, the Epithalamium of Honorius and Maria, 99 (here translation Maurice Platnauer, 1922 for Loeb, third result of "venus" search, page 249 (250) scrolled down on right side of margin. Latin is linked at head of paragraph - http://penelope.uchicago.edu/Thayer/E/R ... mium*.html )

Cesariem tum forte Venus subnixa corusco fingebat solio.
"Venus was seated on her glittering throne, tiring her hair." ("tiring" is apparently an archaic word meaning "attiring," to dress or fix the head or hair, especially with a headdress).

We don't think we can place better than here the nicknames of [nymph], Migonitis & Melaenis given to her by Pausanias. The first needs no explanation: with regard to the second, it is claimed that on the shore which is opposite the isle of Cranae in Laconia, there was a temple of Venus, which Paris had built after the abduction of Helen, to perpetuate the transport of his joy and his recognition; that he gave to this Venus the epithet of Migonitis, and named the territory Migonion with a word which signified the gallant adventure which had passed there. On this, one must refer to Pausanias, and also to the epithet of Melaenis which he said was given to Venus, because men prefer night for the mysteries of love, while other animals approach their females during the day. In any case, the Goddess had a small chapel in Arcadia, & another in Boeotia, where she was honoured under this title. Venus Melaenis, or the Black, also had a temple in a fauxbourg of Corinth; it was she who appeared in a dream to the Courtisan Laïs, to announce the arrival of very rich lovers. On which Bayle makes a rather pleasant reflection: if the foundation of the nickname Melaenis, he says, was solid, one would not find that Venus, as Black, should have shown herself in a dream-vision to the young Laïs, who was not destined to pride herself with the distinction of days and nights.

Venus the Dark, Venus the Black.

Pausanias, Description of Greece 2. 2. 4 :
"Before the city [of Korinthos] is a grove of cypresses called Kraneon. Here are a precinct of Bellerophontes, a temple of Aphrodite Melainis (the Black), and the grave of Laïs."
https://archive.org/details/pausaniasgr ... 6/mode/2up 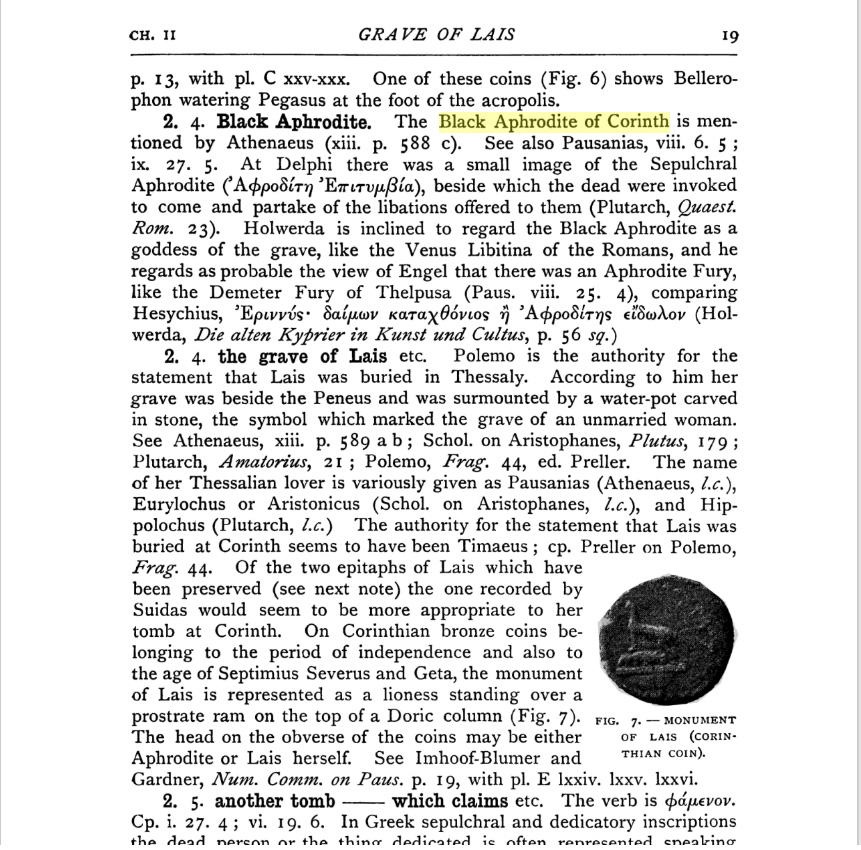 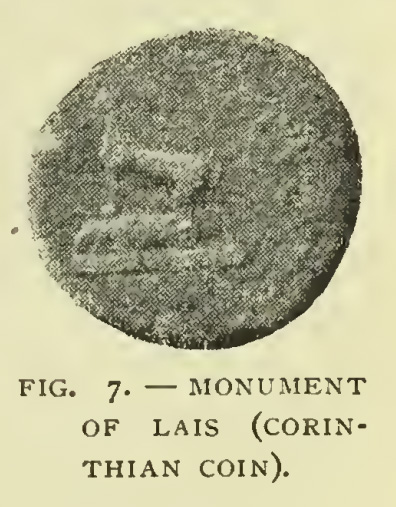 Re: Venus the black

The following article is about the tree "Cypresse" (English Cupressus; see "C.-Hain"), traditionally used at places for dead persons.

#379 by Ross G. R. Caldwell
Whether Pausanias or Athenaeus were possible sources known to Sacco or the artist, Rosso's edition of Semideus does not cite them in the list of Scriptorum loci (Authors cited).

So it is still not completely clear that the artist was referring to this Black Venus, although now we know she exists.

Androphonos: That's a man-killing aspect of Mars and Venus

Anosia: That's a terminus, which appears together with Androphonos. First androphonos (murder), then becoming innocent again after a great sin (anosia). This seems to have occured in the context of a female person Lais, who was a prostitute, somewhere in Thessalia. So much I get from Vollmer, who doesn't tell much.

It's difficult to get precisely the Pauly page, which one is looking for.
Huck
http://trionfi.com