I'm following you Ross - even though I'm an 80s music freak, how can you not know "Der Kommisar"???

I do, I mentioned it in the same post. But "Semideus" rhymes with "Amadeus." I'm glad, Falco's video for "Rock Me Amadeus" is much better than that for "Der Kommissar." And there are far fewer words to parody.

I'll see what I can do with Depeche Mode.

I might not be here to tell the tale, but I sure would have had a tale to tell.

I only say that because I was too young to have know Studio 54. Then I'd have to wish I were BORN earlier, which is a different category of wishing, and I'm not sure I do wish it.

Also there is a children game, with a song ...

That's very old, we played it in our youth.

How did you play the game?

These children call it Plumpsack, I remember Klumpsack ... (it's a game for very young kids)


(you have to view it at youtube)
Huck
http://trionfi.com

#14 by Huck
Ironically there is an old Trionfi card called "Falco" in the Sola Busca Tarocchi .... but Falco took the name from a ski jumper (der „Falke“ genannte DDR-Skispringer Falko Weißpflog)

Good catch Huck - and he looks dazed out on Ecstasy (or what the kids now call "Molly", not that I wasn't a perfect saint when younger - that's the "Angel" trump on my avatar, right?).

There seem to be falcons all over the Coins suit - the five (human headed), seven, eight, page and king cards.


I've often wondered if the Sola Busca was created in connection with the Venetian acquisition of Cyprus 1489. Oddly, reading something last night struck me - the Mantuan ambassador to Venice


"tried over a long period to use his special acquaintance with Girolamo Cornaro to obtain sacred falcons from Cyprus (letter from 1535, but quality falcons from Cyprus must have already been proverbial). [In D.S. Chambers' "Benedetto Agnello, Mantuan Ambassador in Venice, 1530-56", War, culture, and society in Renaissance Venice : essays in honour of John Hale / edited by David S. Chambers, Cecil H. Clough, and Michael E. Mallett., 1993: 144]

Perhaps falcons, emblematic of Cyprus, were in the coins suit as there had to be a financial/asset-swap settlement when the last Queen was forced off of Cyprus - who was none other than Girolamo's aunt, Catherine Cornaro [aka Corner]:

The last Crusader state became a colony of Venice, and as compensation, Catherine was allowed to retain the title of Queen and was made Lady of Asolo, a county on the Terraferma[15] of the Republic of Venice in the Veneto region, in 1489. Asolo soon gained a reputation as a court of literary and artistic distinction, mainly as a result of it being the fictitious setting for Pietro Bembo's platonic dialogues on love, Gli Asolani. Caterina died in Venice in 1510. (Wiki)

The falcon is not a surprise when shown with any elite, but this must surely be symbolic of the Cornaro's connection to Cyprus and its "royal falcons":
Giorgio Cornaro with a Falcon [Girolamo's father and Catherine's brother d. 1527 so this is posthumous or another kinsman]
Titian
Date: 1537 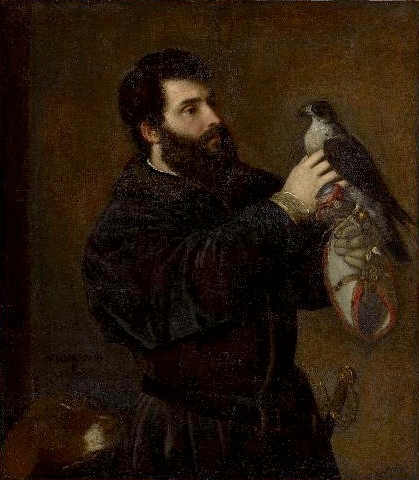 EDIT: Actually this must be "Giorgio Jr." - Girolamo's brother (and this Omaha museum that holds the painting got Cyprus wrong and put in Crete):

Chiefly remembered as an admiral, landowner, and patron of the arts, Giorgio Cornaro was, with his father, instrumental in importing falcons from Crete for the nobility of Italy, an activity perhaps celebrated by the inclusion of such a bird in this painting, which was commissioned at the time of his coming of age and election to Venice’s Great Council (Maggior Consiglio). Titian’s sympathy for the sitter is apparent in the sensitivity with which he portrays the handsome, convivial, and robust young nobleman. The artist took great care with the rich costume of the sitter, paying particular attention to the falconer’s paraphernalia and emphasizing the splendid bird perched on the elaborate glove as well as showing the ornamental hood and pendant leather jesses with bells attached. When the painting entered the collection, the merits of Titian’s genius were hidden primarily behind a muddy varnish, and it was deemed a tired example of the work of a great artist. However, with recent conservation at the J. Paul Getty Museum, Titian’s colors, his profound use of lights and shades, and his great sensitivity to the character of his sitter are again revealed, and this portrait of Giorgio Cornaro takes its place as one of the finest works of the Italian Renaissance in an American collection.
https://www.joslyn.org/collections-and- ... -a-falcon/

Users browsing this forum: No registered users and 20 guests