Documenting the people, places, and events that shaped Tarot History. (Credentials not required; but references, citations, and substantiating evidence may be requested at the door.)
Post Reply
463 posts

Johann Anton Janson von Waasberghe, Ratsherr in Danzig, is noted as the writer of the weekly newspaper "Der Freidenker"
The author has name variants: There is a Dutch family "van Waesberghe" with a long ancestor research and activities in the printing business in the Netherlands with a "JAN VAN WAESBERGHE (DE OUDE), geb. Antwerpen 1556, ovl./beg. Rotterdam Grote Kerk 25-5-1626" and following strange names in the family with "Jansonius". Johann Anton Janson von Waasberghe, Ratsherr in Danzig" might be well a descendent from this family. Janson isn't a common German name. And the region of Danzig was known for inhabitants which came from Holland and the Netherlands.
https://www.nikhef.nl/~louk/MESKW/gener ... #2713;view
The text "Das Carneval gelehrter Phantasien" (1763) was to our knowledge the first, which noted Cartomancy methodes used by Dutch and German ladies.
https://books.google.de/books?redir_esc ... en&f=false
The text was written by an anonymous, published in Leipzig and Frankfurt, both the most prominent bookprinting locations in Germany (one might suspect, that there is a professionell printer behind it).
It's a strange accident, that we have in the German language region as first early text about cartomancy somebody who knows the oracle habits of German and Dutch ladies and then as a second very early text an author, who lives in Germany, but seems to have come from the Netherlands. Is it possible, that the author of the Carneval text is identical to the unknown texts of 1747 or the known texts of 1769?
The version of 1769 is not totally identical to the version of 1769. The author Waesberghe tells us in the foreword, that he had arranged minor improvements against the work of 1747, so there is not a 100%-security about the cartomancy date of 1747. If Waesberghe had been the author of the carneval text, then he might have had a reason to embed some notes about divination texts in the new editions of his earlier work. 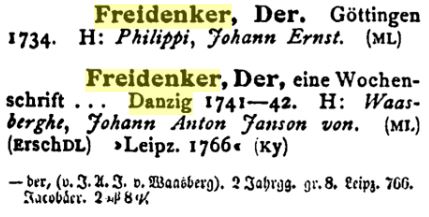 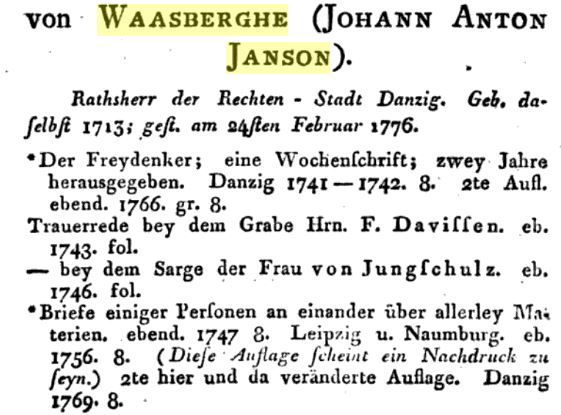 This statement says, that there was a not changed edition of the work of 1747 in the year 1756 and a slightly variated version in the year 1769.
Huck
http://trionfi.com
Top

That's a complex Dutch sentence and I don't claim to understand all of it. But the meaning of "Waarzeggen uit Kaarten" seems to have a clear meaning. There are women, who with the help of card divination, riddle books (whatever this precisely might mean), coffee cups clearly can see something ... and that what they see is not friendly to everybody (?).
The author seems to be a funny writer, Willem van Swanenburg, mainly known only in the Dutch world.
http://docplayer.nl/62076787-Campo-weye ... n-als.html

Originally he was a painter. He had an interest in the teachings of Hermes Trismegistos, so I read. He died 1728, c 50 years old.
Huck
http://trionfi.com
Top

Jack the Gyant-killer: a Comi-tragical Farce of One Act. As it is Acted at the New-Theatre in the Hay-Market
publisher (?): J. Roberts, 1730 - 19 Seiten
https://books.google.de/books?id=SwsOAA ... &q&f=false 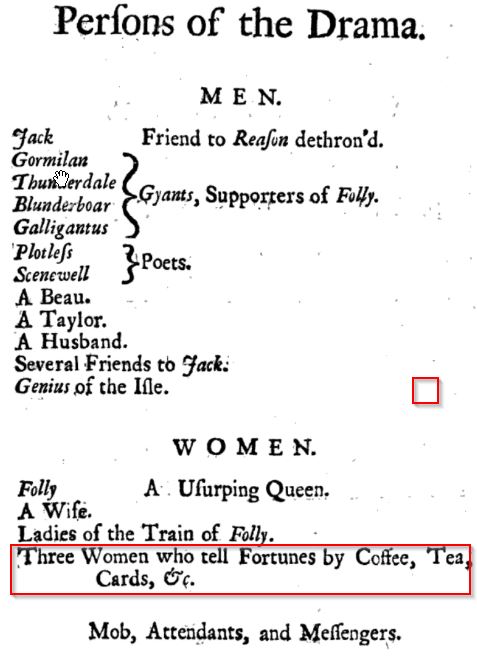 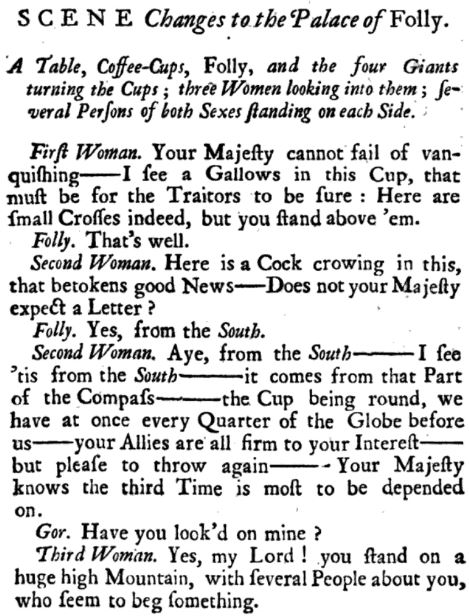 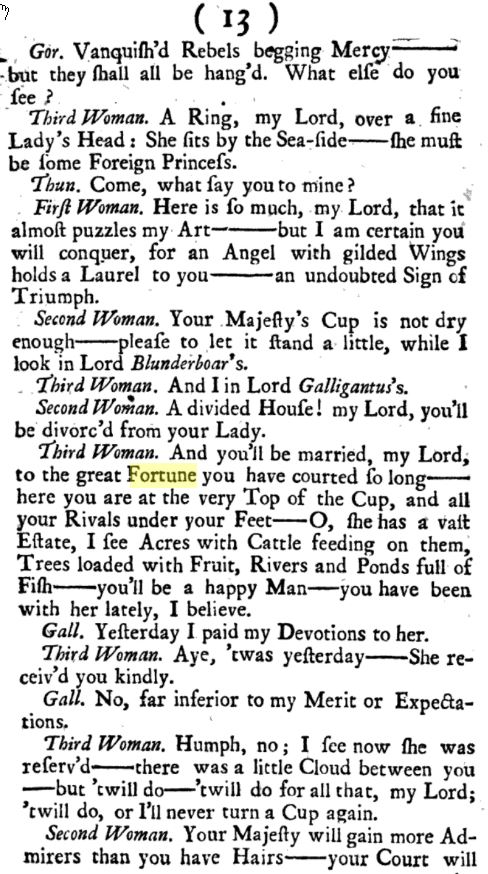 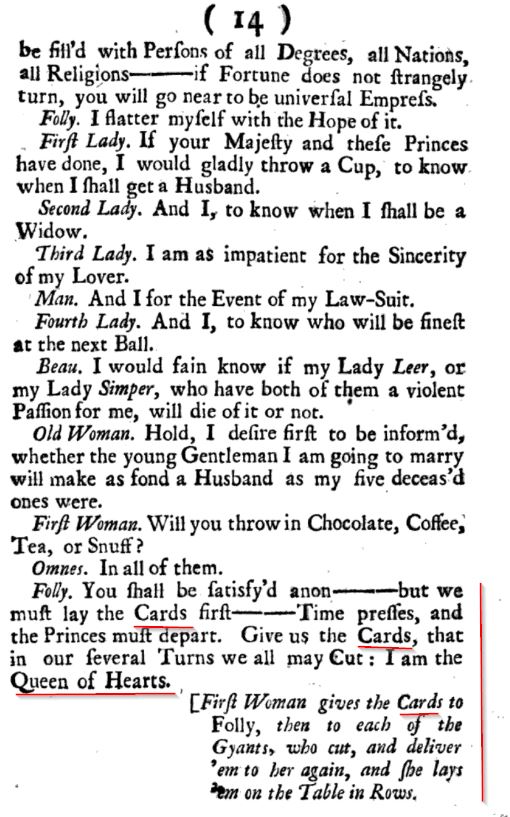 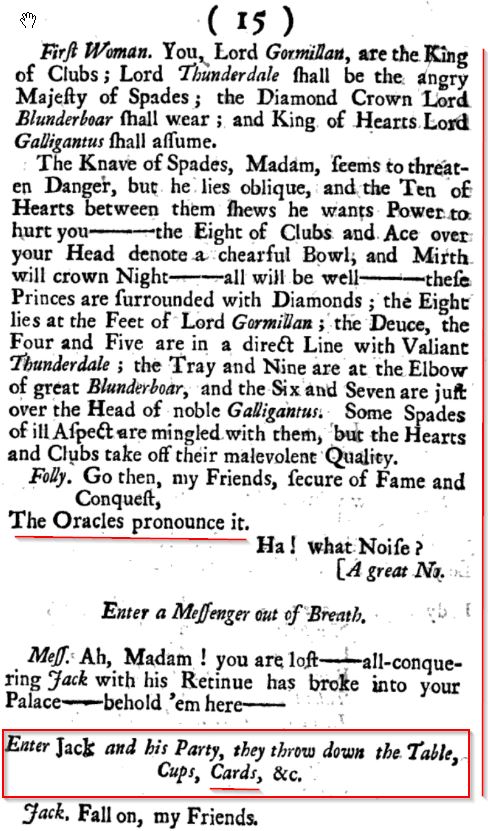 Well, we don't know, if the versions of 1726 and 1708 already had the scene with the card divination.
Huck
http://trionfi.com
Top

"El Lindo Don Diego", variously presented in modern Spain. The text belongs to the most successful works of the author. The title hero Don Diego ist a negative person, attacked cause of his arrogance.
https://es.wikipedia.org/wiki/El_lindo_don_Diego

The word "naypes" appears in 2 scenes (Sale Beatriz / Sale Don Tello, y Mosquito) ... the both scenes appear in sequence as shown below. Ross states, that it is in "Atto 3". 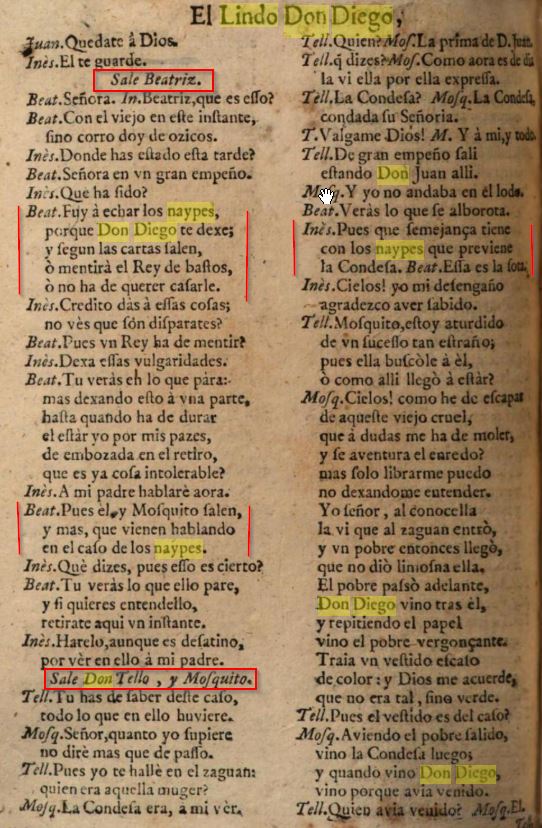 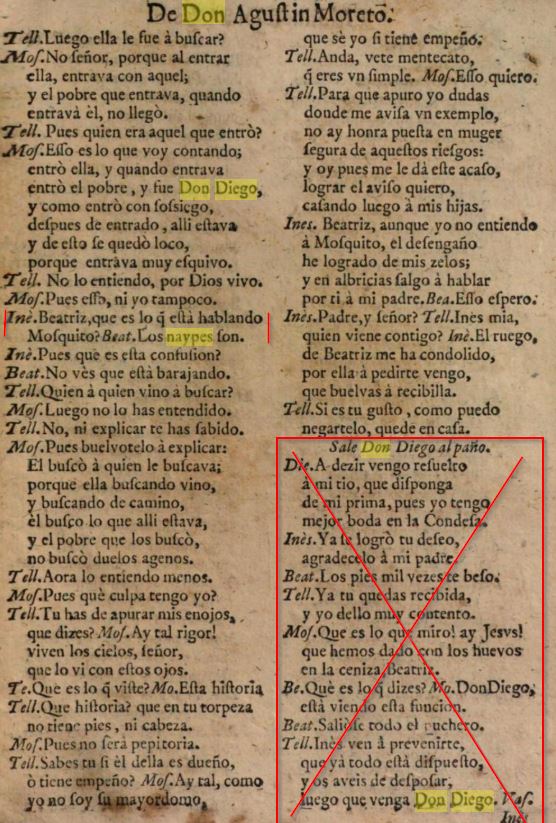 
DOÑA INÉS Where have you been this afternoon?
BEATRIZ My Lady, in some important affair.
DOÑA INÉS What was that?
BEATRIZ I went to throw the cards (Or "have them thrown")
To see if Don Diego will leave you.
And according to the cards
Either the King of Batons lies
Or he won't marry.
DOÑA INÉS Do you give credit to such things?
Don't you see it's nonsense?
BEATRIZ How is that? Would a king lie?
DOÑA INÉS Set aside these vulgarities.

The rest is not translated, but it would be nice to see one. To me it's still is a question, if the text indeed speaks of card divination in the common sense, or if there is another possible solution.

"echar dos naypes" (shall mean "throw the cards") is a critical interpretation.

But a German-Spanish wordbook of 1831 translates "echar naypes" with "card distribution", not with card divination.
https://books.google.de/books?id=st9DAA ... es&f=false
A Spanish text of 1729 gives the same impression, that is not about card divination.
https://books.google.de/books?id=i2ap_K ... es&f=false

Following "echar naypes" I found another appearance echar los naypes, close to the 1662 date of Moreto.

Automatic translation:
throwing the naypes is not a fault
what is hitting by industry
and they will not say, because you throw them
what do you collect figures

A text, which might express the existence of card divination, but - again - not totally sure. The text is from "Ocios de Castalia, en diversos poemas, etc"
by Juan de OVANDO SANTAREN GOMEZ DE LOAYSA and the year of the publication is 1663, so one year behind 1662 and the publication of "El Lindo Don Diego", the other appearance of "echar los naypes". This fact is striking, one can bet on the idea, that Ovando "quoted and reflected" Moreto with his text, as there don't appear much answers on "echar naypes or naipes" in the Google books engine.

Ovando's poem text is a long one, 4 pages. The title is "Cuentanse las habilidades, y sucessos de una Murciana", which translates as "Count the skills, and successes of a Murciana", whereby it stays an open question, what a Murciana is. The wordbook suggests "from Murcia", which is a city in Spain. Then follows a "Satira", which indicates, that there should be something funny in the text. 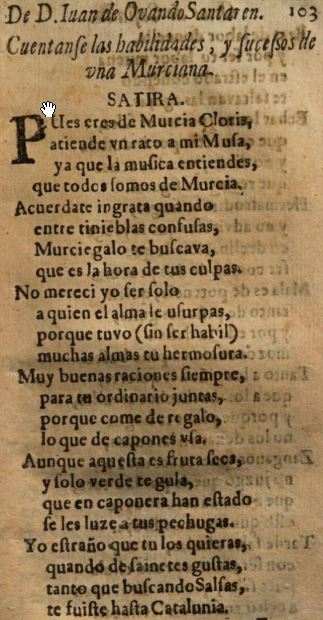 Re: Trionfi.com ... divination with cards

Automatic translation of the title ....
'Deception in plain sight, and amusement of worldly works, founded on licit games of hands, containing all the differences of the goblets, and other very curious abilities"

In the "Indice de los juegos que se contienen en este libro" page 166 ("Index of the games contained in the book") of the 1755 edition we have a lot of game names. Much of them contain the word "naypes" and some of these also contain the word "adivinar".
The same index in the 1733 edition has much less games, only few entries, which relate to naypes, and no game which contains the word "adivinar".
The text of the 1745 edition is not given to me.
Huck
http://trionfi.com
Top

So I assume, that the work of Minguet got attention in Spain, but not elsewhere and also not here.

I've sorted the index, as far it is of interest for the cartomancy study. The first part doesn't contain "naypes" or "adivinar" (or similar), which I decorated with some red and green lines to give some orientation in the later part. 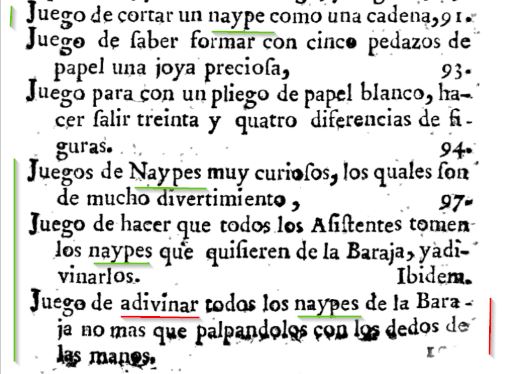 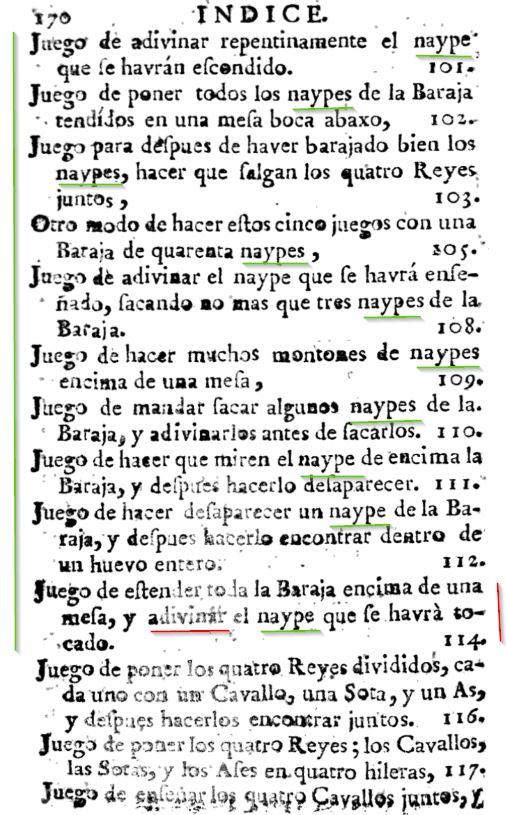 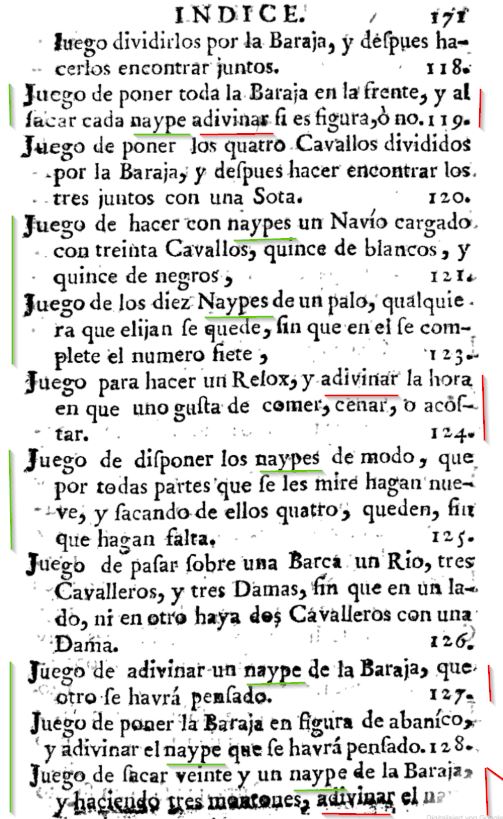 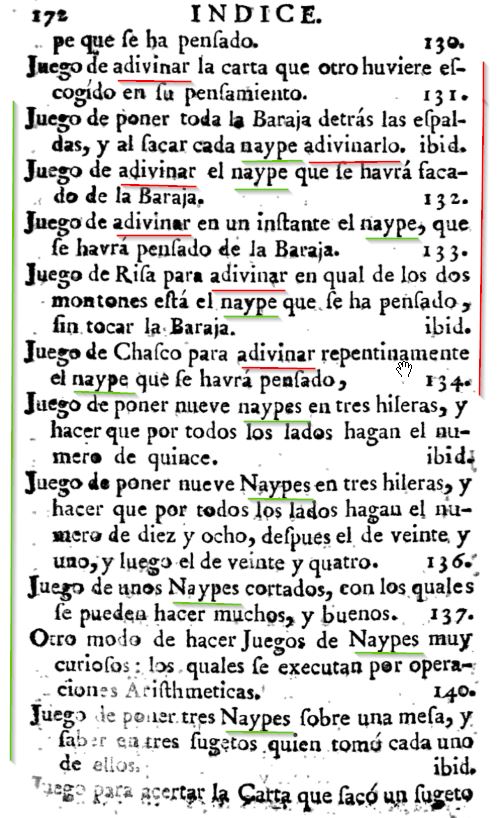 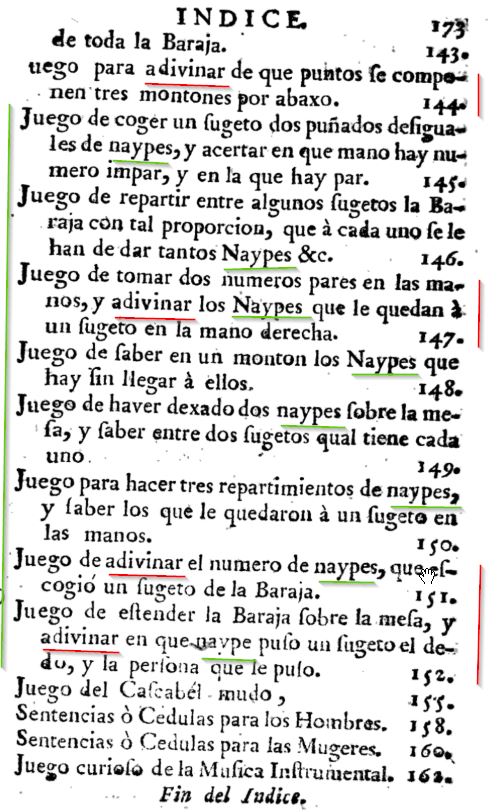 If I didn't miscount, there should be at least 12 texts related to the word "naypes" and "adinivar" ... at least these should be relevant for the cartomancy development, but possibly there are some more. Or, another possibility, my idea, that all these games belong to the Cartomancy genre, is too optimistic. My not really existing Spanish is not good enough for the question.

I got the warning from Franco, that in all cases in the noted text ("naypes" and "adivinar") the object of the game is "guessing". I also saw "adivinar" translated as "to guess". I know "to guess" as the German "schätzen", which is used in certain life situations to predict an outcome, for instance "the state of the weather in 5 hours", but "schätzen" is in German culture not used in card divination. Spanish has the word "adivinación" and this seems to be the "divination" and I saw it used in Spanish cartomancy context. "adinivar" and "adivinación" sound as if they are related, but it seems they have a difference.
Franco calls the related games "Prestidigitation-games" and I don't know, what this is. The web tells me ...
https://roll20.net/compendium/dnd5e/Pre ... on#content

Somebody else offers "Taschenspielerkunst", which google translates "handheld art". Somehow that, what the pagat makes on Tarot card 1. 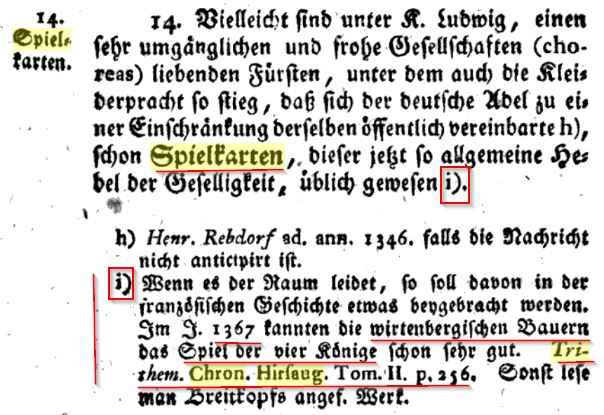 The passage from a text of 1797 (see above) informs, that another text (Trithem. Chron. Hirsaug. Tom. II. p. 256, related to the cloister Hirsau in Würtemberg, written by Trithemius) has a note, that the Farmers in Württemberg play a "game of 4 Kings" in the year 1367. The text interprets, that this game with 4 Kings should be playing cards (another interpretation would be chess with 4 players, but this isn't meant in this case). This assumption is variously repeated during 19th century in other books. The text is given at the link below, but there are various editions and till now I couldn't find the given place.
https://www.geschichtsquellen.de/werk/4561

I found a text, which is said to be a correct translation of the Trithemius text.
https://books.google.de/books?id=Vn1nDg ... &q&f=false 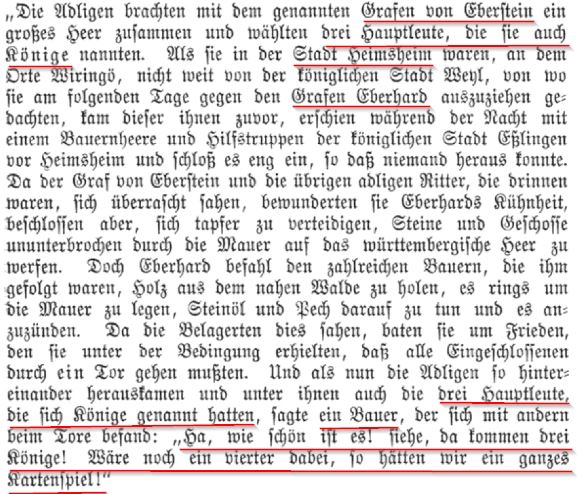 This tells, that Graf von Eberstein wanted to attack Graf Eberhard with an army, which was led by three knights, which were called "kings" inside this army. This became known by Eberhard, who quickly collected a greater army and encircled the other. This tried to escape and collected at a stronghold, but had to resign soon, cause their attackers could burn them. Then, a farmer who with many other farmers had helped Eberhard, embarked with a call: "Ha, how nice it is! Look! There come 3 Kings. If there would be a fourth, then we would have a complete card deck." 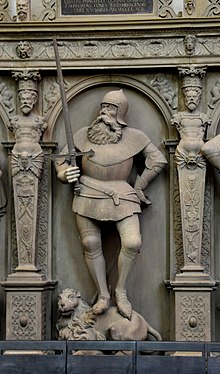 Graf Eberhard II. of Württemberg, called "der Greiner" ... yes, he was grandfather-in-law of a Bernabo daughter, since 1380.

Modern research has concluded, that Tritheim and with him also Uhland were wrong and that that the Heimsen story happenend in 1395/1396, not in 1367. In 1367 happened a Wildbad episode, and this also became a poem of Uhland. It's expressed in the article, that Tritheim himself corrected his statement from 1367 to 1395. Tritheim lived about 100 years later, he was not a contemporary writer. 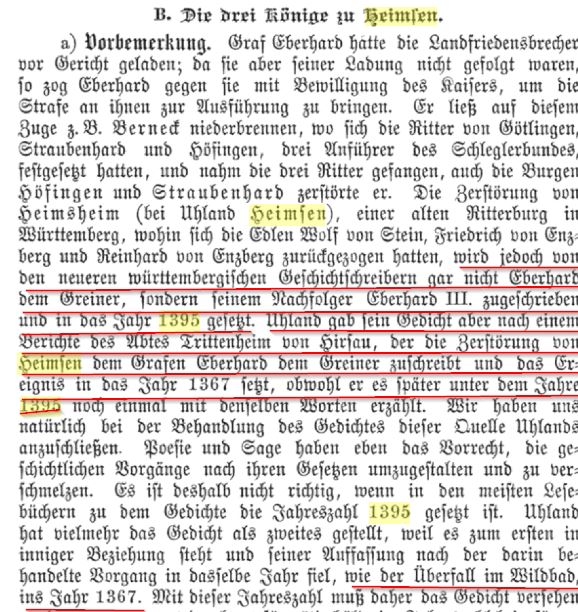 The described scene with playing cards took place at 24th of July 1515 during a "congress of Vienna". The congress started July 15 and was finished July 28 / August 2 and it included 2 important weddings. The weddings took place at July 22. When Maximilian married Bianca Maria Sforza in 1493, the playing cards of Bianca Maria were the amusing objects before the wedding. The playing cards were then used in practical play the next day.
At these both weddings the playing card ritual took place two days after the wedding. Some hundred coins with new motifs were produced for this opportunity, made from silver and gold. At the play Maximilian did win nothing, most coins were won by the princesses. The two weddings secured the political relations between Empire and Hungary (similar to the double weddings between Habsburg and Spain 1497).

Re: Trionfi.com: .... old suits in decks of Switzerland 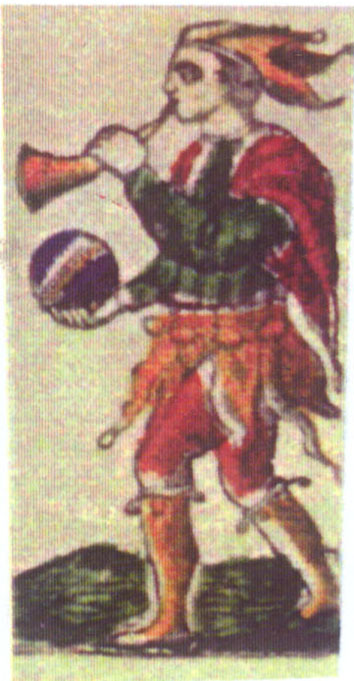 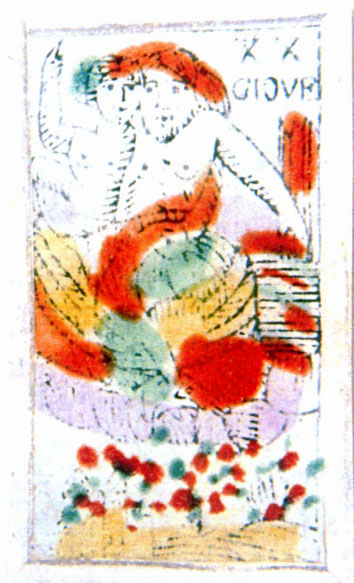 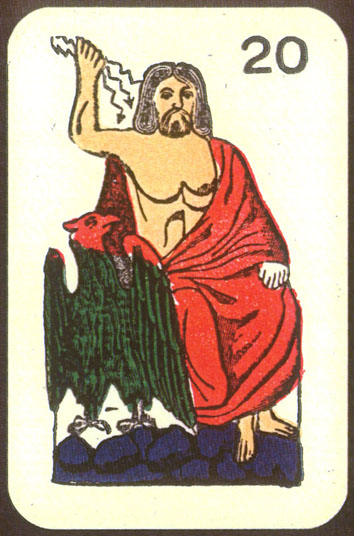 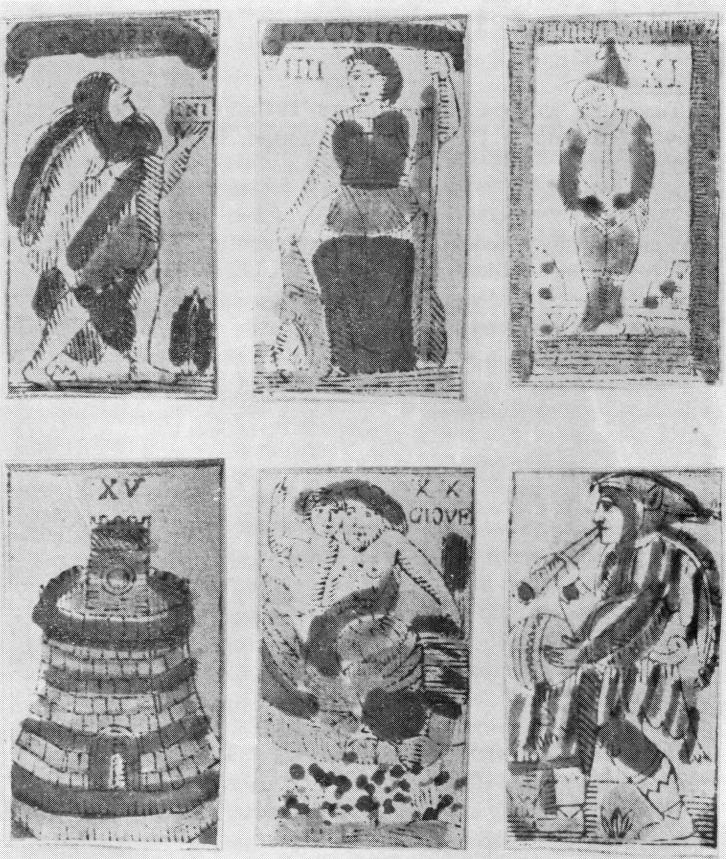 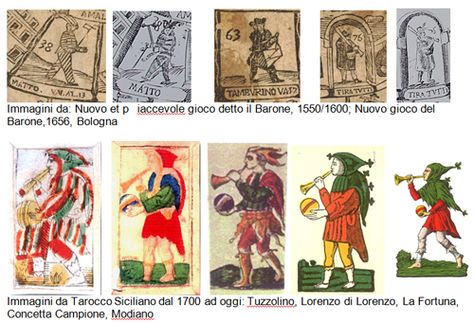 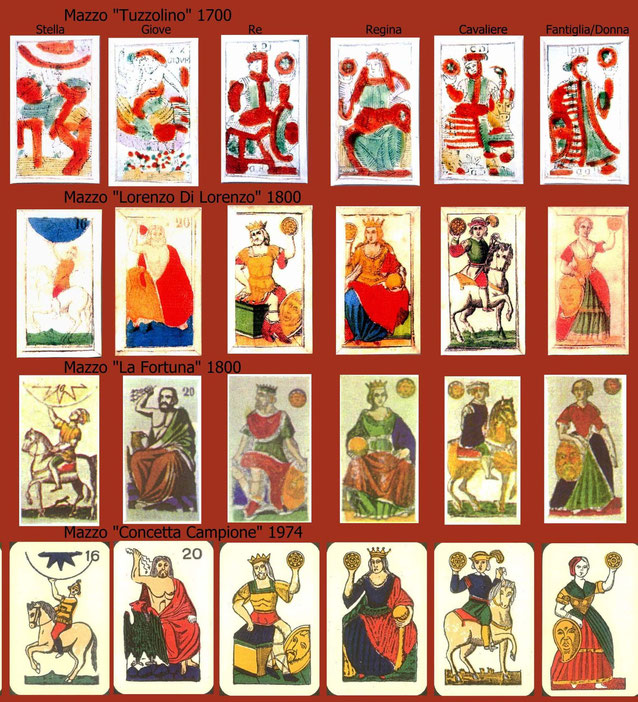